This is a spin-off from my vignette “Checking out”.
The dead German in front was in the original setup for Checking out but was removed.
But as I already have painted him halfway I wanted to place him in a new setup.
I have this machine gunner made by Warriors that suits very good at the stairs of the base. I want to build something that includes these two guys.

So far I have two scenarios. 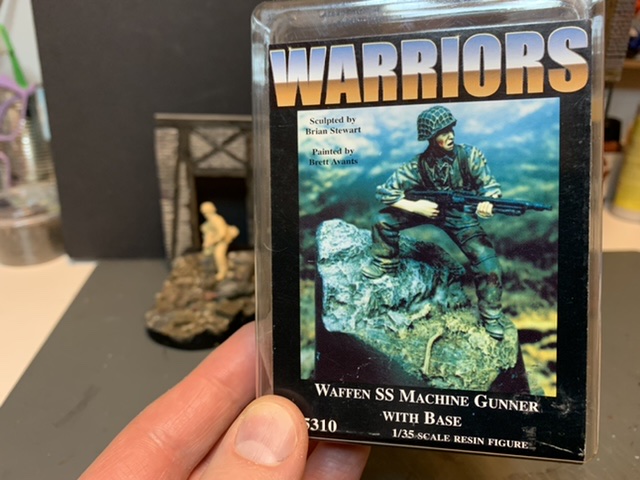 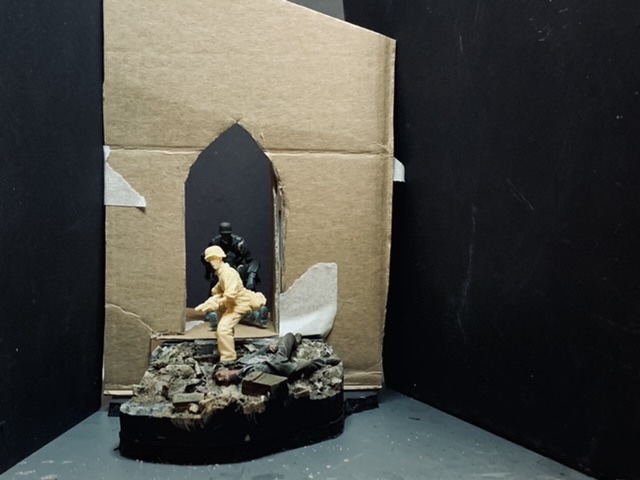 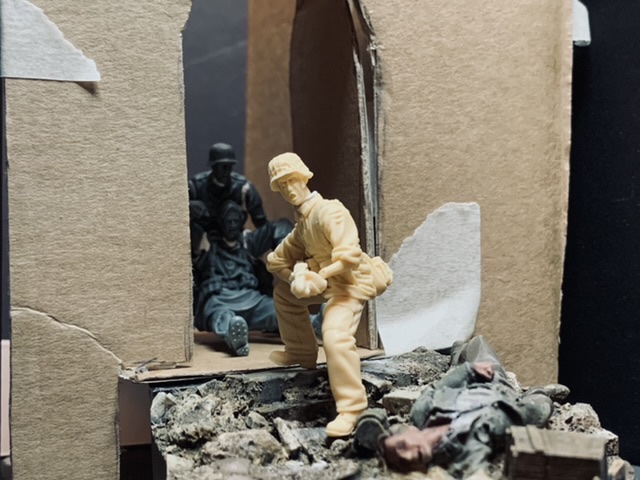 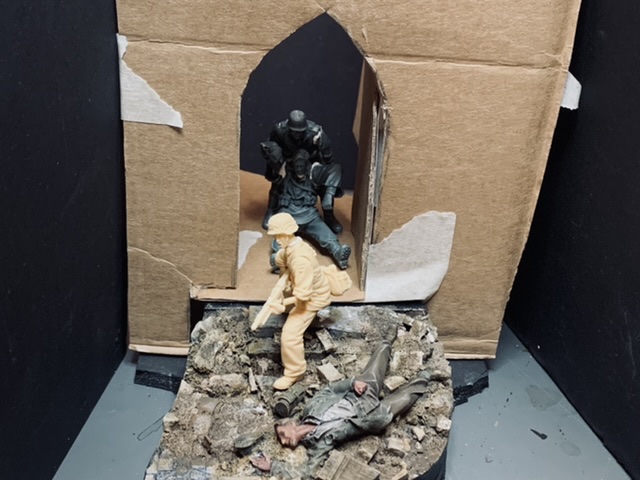 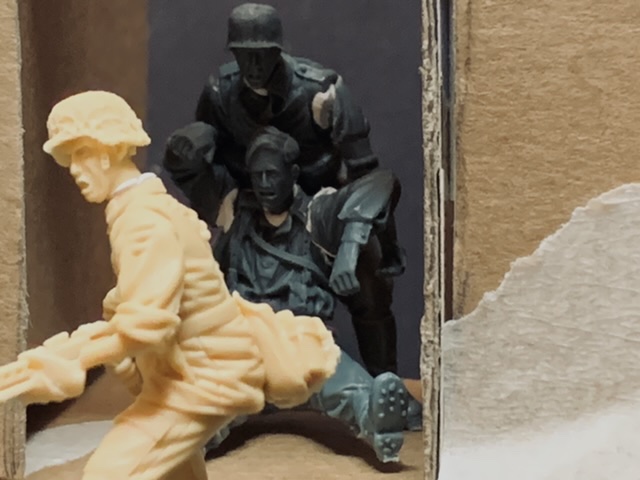 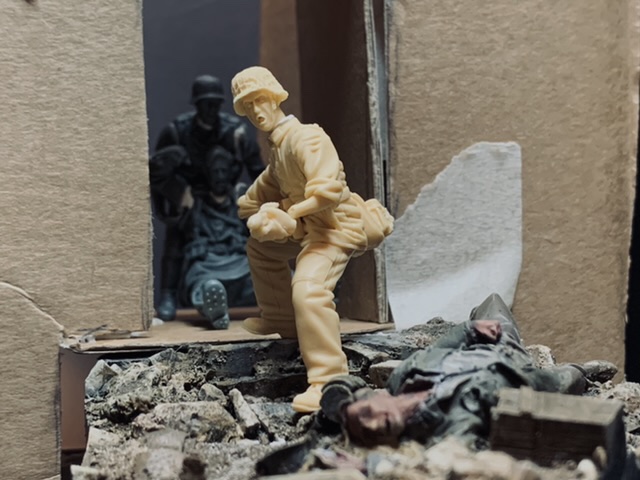 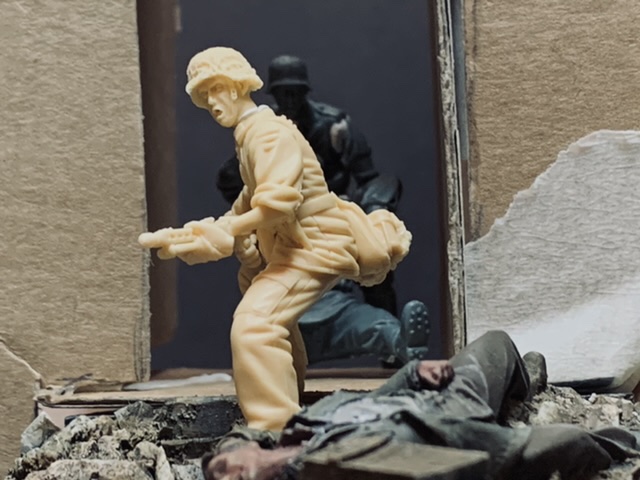 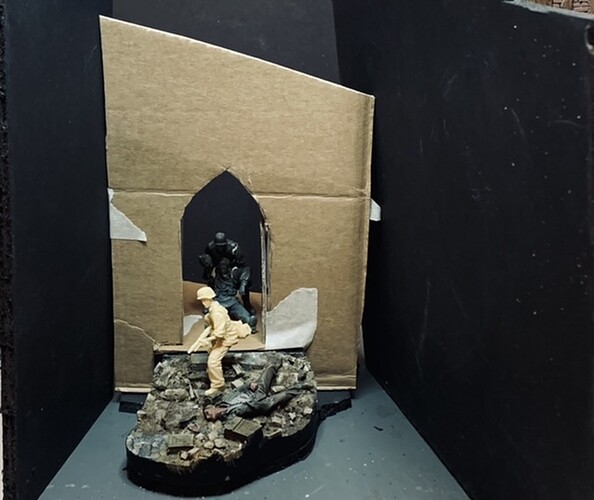 Scenario 2.
This is a sort of box art diorama. I have never done one of them before. This is much more difficult than the other one. The Germans are retreating here as well, but here the most of the diorama shows the inside of a room. This means a lot lot of details, and a lot of brainstorming to get everything right. 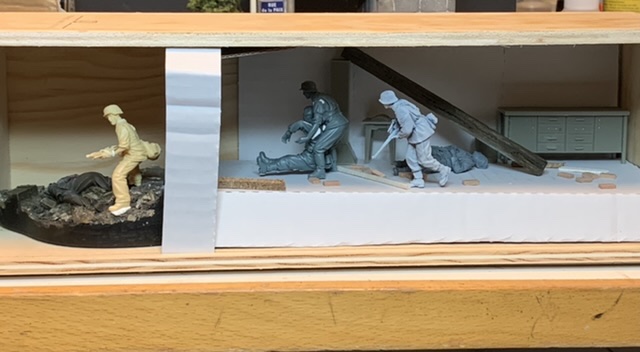 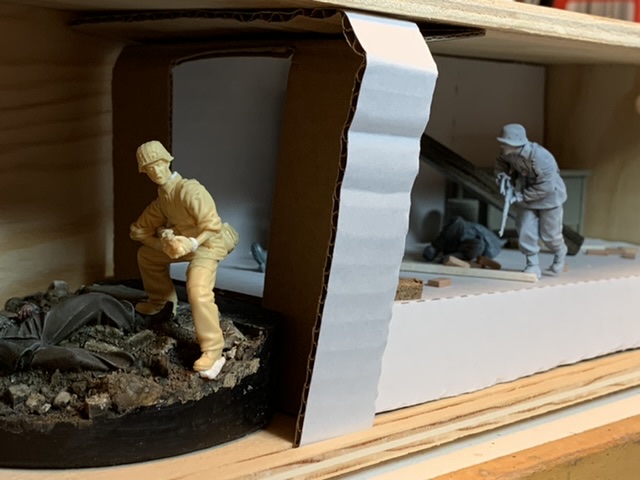 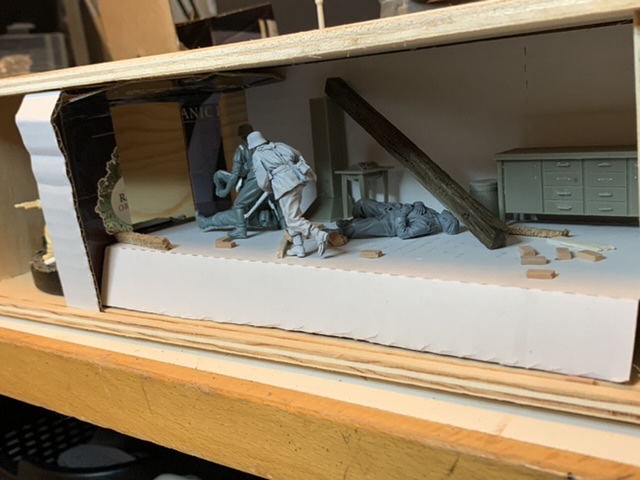 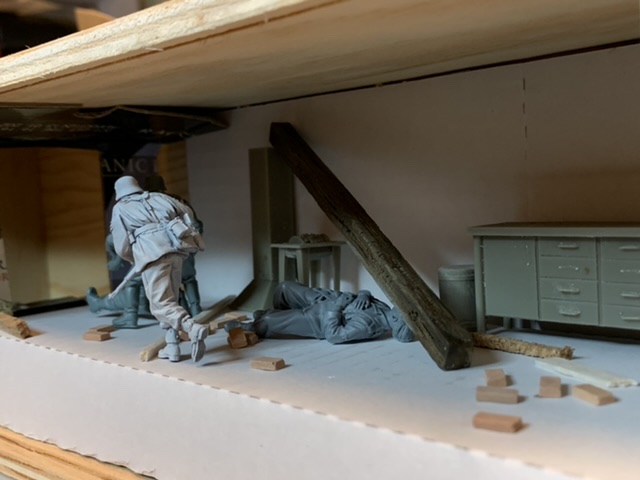 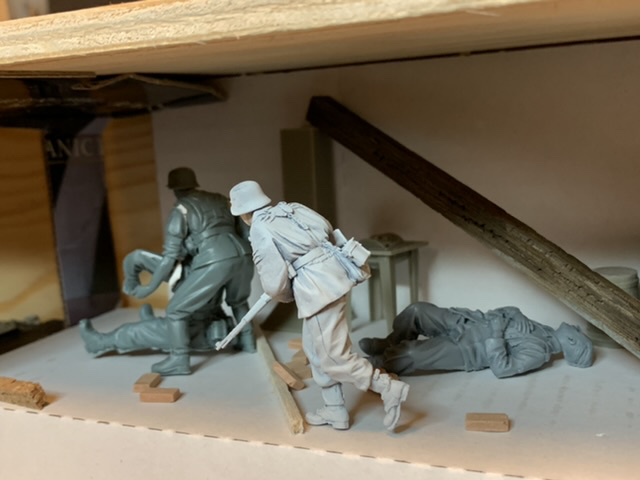 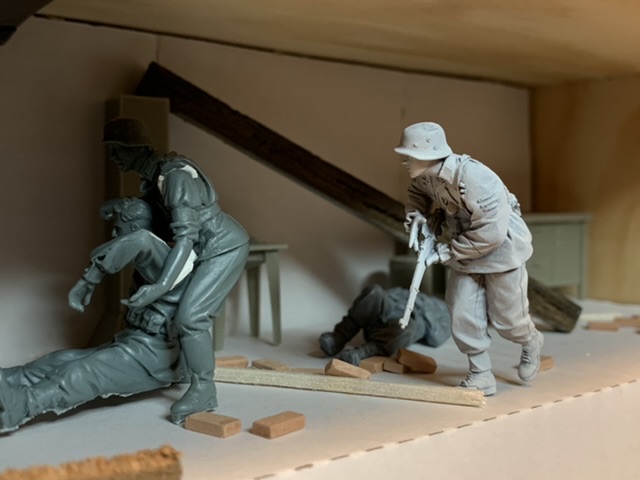 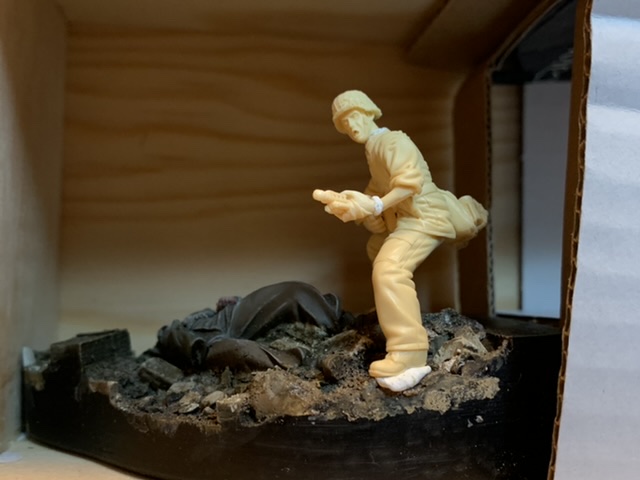 So what do you think? The easy way or the hard way?
Probably it will take years before this build is ready, but I think it’s fun to show you have I think and in someway it could inspire someone.
Cheers 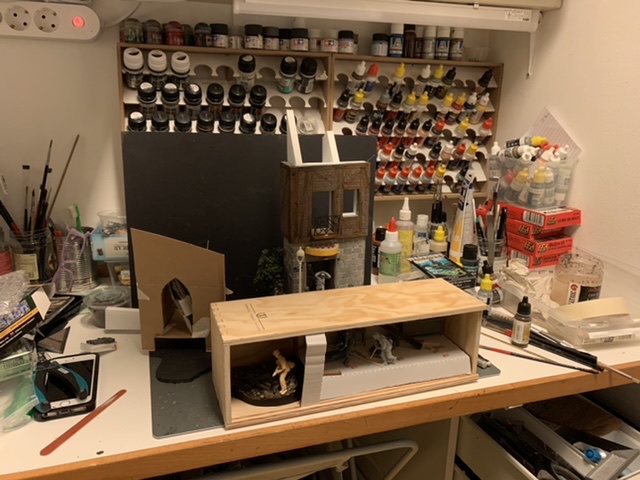 Very dynamic. You get a real sense of the urgency of the situation.

Damn, the Diorama police got me… 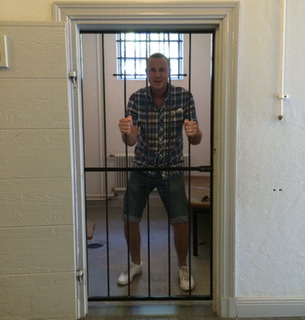 I think I like #1 better because you immediately see that the gunner is providing covering fire for the guy dragging the wounded man.

Yo! Thanks man! Yes, as I often think: keep it simple and let the viewers understand your story right away. Cheers

KISS, keep it simple stupid. I need to do more of that myself. That’s the phrase not that your stupid.

#1 for sure. The simpler the scene you can make while still conveying the message (urgency) is the one that usually works best
# 2 could easily be a stand alone diorama depicting the chaos of having retreated into basically a poor defensive position with only one way out.
Who manufacturers the guy dragging the wounded kommraden? That’s a cool figure set.
The dead German looks like one of the guys I used in my dio “Götterdämmerung” https://forums.kitmaker.net/t/gotterdammerung/2354
I have long since forgotten the maker but I believe it was from a group of German Paras.(maybe Heller?)
Anyway, looks like you’ve got another good dio coming up, looking forward to seeing it progress

Great build of yours! The figures are made by Warriors. Cheers

Thanks for your replies. After a night of good sleeping, I am thinking: KISS.
I want to finish this build within 6 months, #1 is possible to do so, #2 big risk of a nice start but then it ends up in a box named: PTF(S), “projects to finish, sometime”…

Go for scenerio 1.
BUT
Keep scenario 2 for the future. A room almost requires a window but the enclosed space could also be a cellar. Some pipes under the ceiling, maybe some debris on the floor, maybe a steel hatch in a wall suggesting some sort of space for technical stuff, maybe a lid in the floor to access pipes under the floor, there could be a hole in the ceiling caused by a grenade (letting in light from above).
Keep the movement of troops retreating further into the cellars looking for a way out

Yes I go for number 1.
Here is the kit @creading 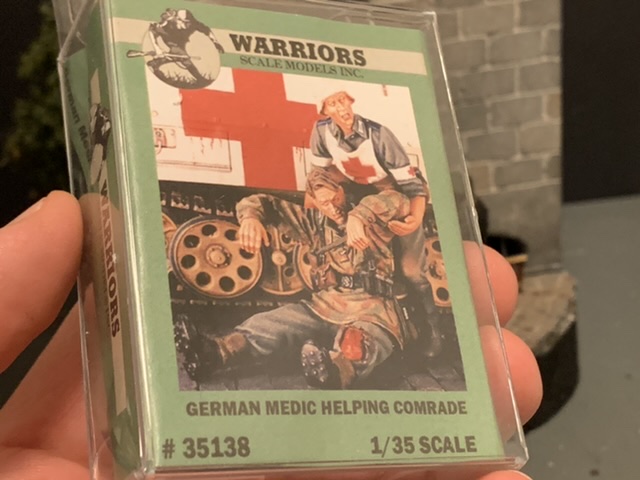 #2 No I won’t forgot this one. There are so many different possibilities. One scenario is to make a really claustrophobic underground box diorama, that smell death, pain and anxiety in a confined space.

It would be cool to have small lamps in the roof as the only light source. Oh man what sickness do I have…? 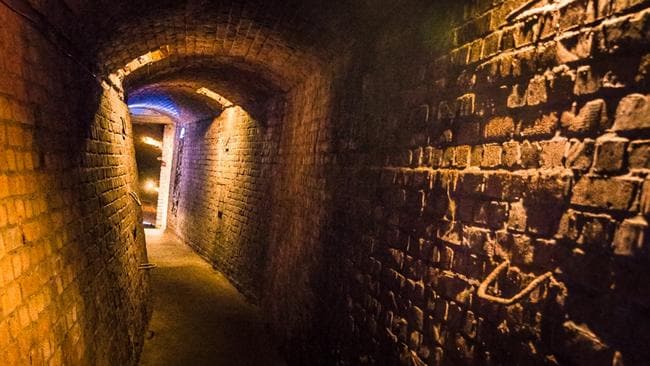 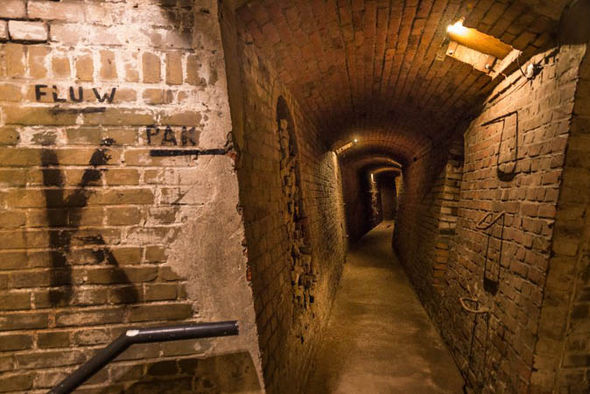 A little bit more dungeon than I was thinking of but definitely better.
Running to get out of the bunkers when the enemy has entered them …
Try to have an angle in the tunnel twisting into the back of the diorama. 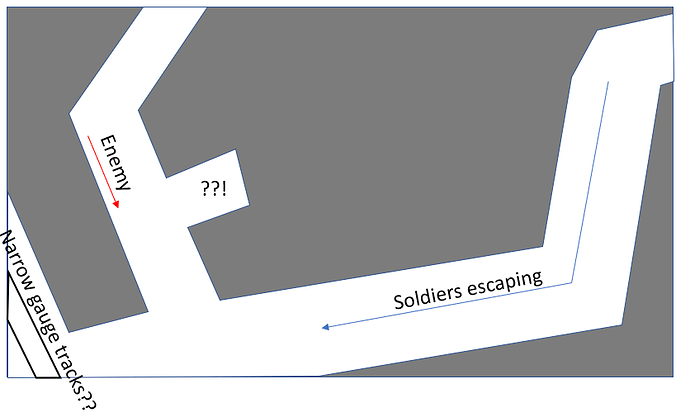 Three ways to view it, none of the views opens to things outside the diorama, only narrow corridors disappearing around corners. Possibly narrow gauge tracks to transport heavy ammunition if it is inside a bunker for artillery or some underground factory

Looking good! I think it’s time for you to visit the paint and styrofoam shop Robin:)
Such great ideas must come a live!

I have worked with a mockup for #1 scenario.
As you see in the picture with the white paper I will enlarge the base plate. If I have a corner the build will be more interesting, quite like the checking out base.
Cheers 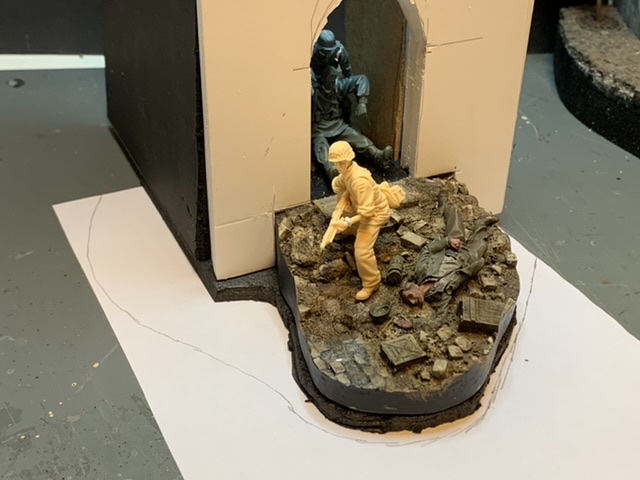 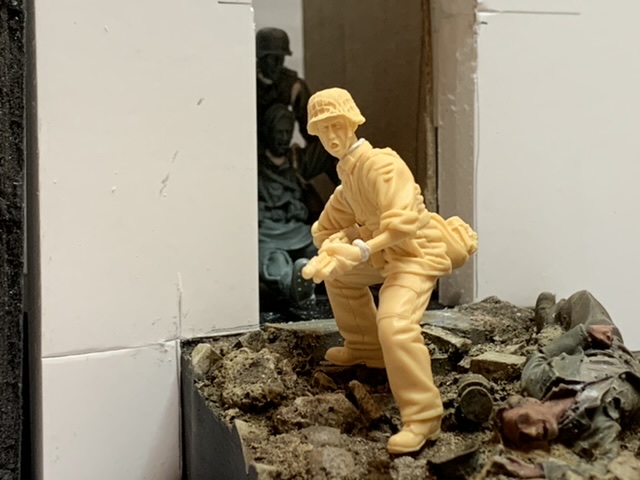 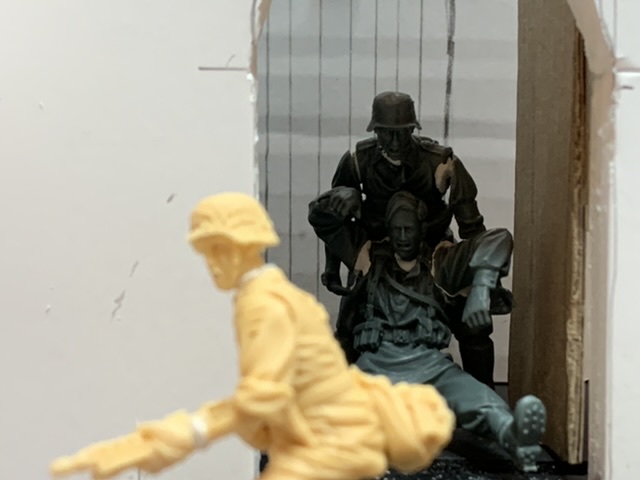 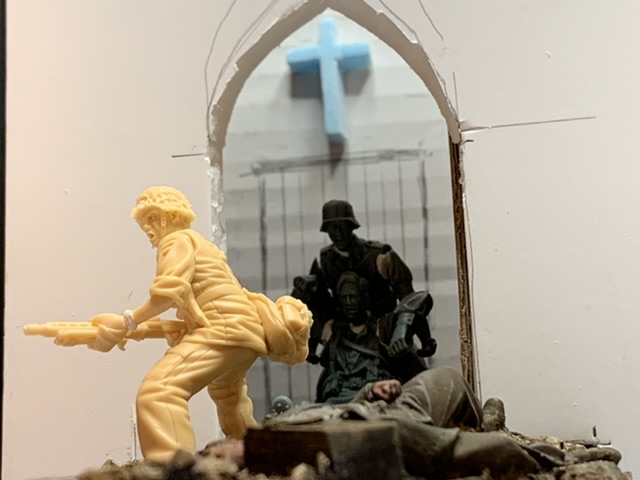 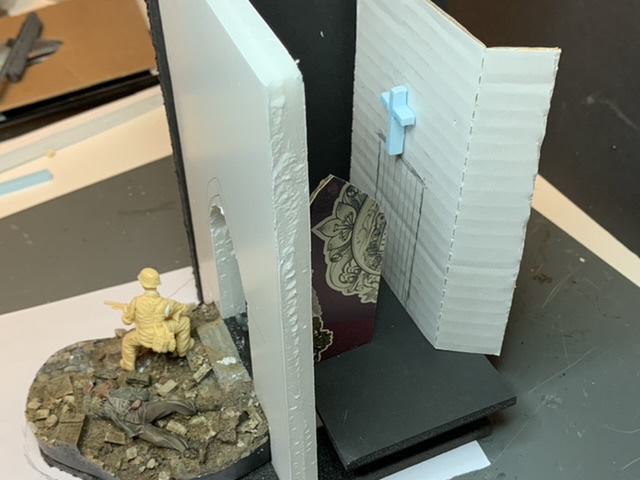 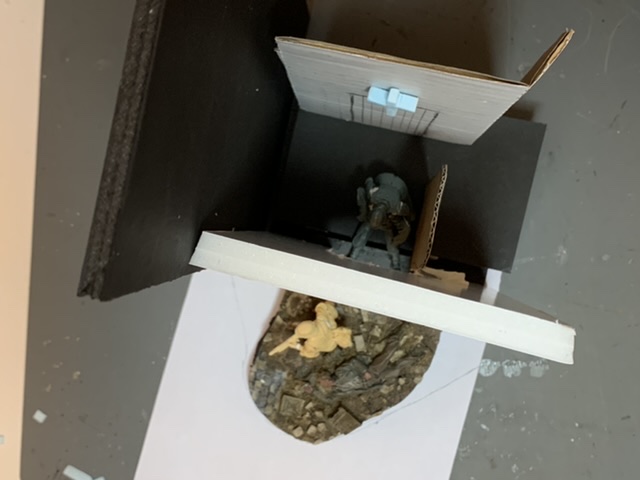 My opinion would leave the base as is and not add a corner. As it is now the focus is entirely on the gunner covering his wounded comrades. In the tight space you now have that drama is laser focused as is the intensity and urgency of the situation. Enlarging the base by adding a corner in I think would only distract from the action.

Thanks! I like opinions, all of them will be considered:) /Erik

I am with Armorsmith on this. Less is sometimes more.
Enlarge the base just enough to blend it in with the wall behind it.
Focus the interest on that lone soldier covering his comrades, all alone
on his tiny patch of land.

Looking good! I think it’s time for you to visit the paint and styrofoam shop Robin:)
Such great ideas must come a live!

I suck at painting figures so I stay away from trying to make a diorama.
Controlled viewpoints and blocking angles is used in model railroading to make the cities and landscapes look bigger than they are.
The same principles apply here. Small scenes blocked off from each other but the viewer can move around and see the parts and connect them in his/her mind

Erik,
The forth photo down will be the money shot when the dio is finished, The low angle showing the wounded man being dragged inside with the crucifix right above all framed by the doorway.
Very poignant with the right lighting! Damn, I can’t wait to see this on finished!

Don’t forget the dead soldier in the foreground, death and war outside and hopes for peace inside