Germany half track and 88mm

I have a project in mind. I’m also building up my stash!

Comments on both kits? Are they any good. I not worried about a challenge or if these half tracks ever even pulled an 88mm.

Thanks. Down side is that neither kit is available through my preferred dealer.

Good thing I’m looking for an end result and not focused just on the vehicle!!

There is also the Trumpeter Sd.Kfz. 7, kit nr 01514
It has some issues, manageable for a reasonably skilled model builder but still
more work than using the Dragon kit.
https://www.perthmilitarymodelling.com/reviews/vehicles/trumpeter/tr01514.html

There is one in Illinois: 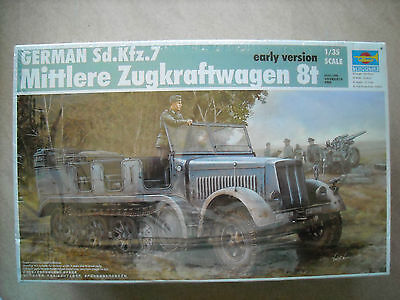 Find many great new & used options and get the best deals for TRUMPETER-1/35-#01514- EARLY VERSION SDKFZ.7 MITTLERE ZUGKRAFTWAGEN 8T at the best online prices at eBay! Free shipping for many products!

I don’t mined a challenge.

Don’t be scared of evilbay. They have managed to get a discount from the Evil One so now they only need to deliver the soul of every 1000nd customer

Thanks but no thanks. I have this thing about supporting local suppliers.

I may go with my first choice. The Tamiya 35239. It doesn’t have the rows of seats and I can fill the back with 'stuff.
Thing is I haven’t built a Tamiya kit since, er ah, a long time.

The Tamiya 35239 is a good kit, perhaps not quite up to the latest standards but certainly more than acceptable. However it is “wrong” for the 88mm. The FAMO tractor was in very short supply and was issued to the Instansetzung or workshop units for tank recovery. They were always in demand for this task so would unlikely to be “wasted” merely pulling a gun. I’m not saying it never happened, but it would be better to use one of the Sdkfz kits mentioned. The Trumpeter one I’ve made and it’s a good kit. It reportedly had size issues, but hey, it looks like an Sdkfz 7 to me. There’s also a late war one from the same people with a truck bed type rear which is also good - comes with a decent moulded canvas too!

I’ve just ordered both for my stash.

Sourcing was problematic and they are not cheap! But, if you want accuracy and detail, nobody comes close in my opinion. One thing though, 6260 comes with both styrene and alluminium barrels for both Flak 18 and 36. But, only the styrene barrels have visible rifling. I opted to buy an AM barrel from Aber to correct this. Otherwise the kits themselves are pretty much peerless.

If you’re willing to stand a little inaccuracy, the FAMO pulling an 88 just looks really cool! But yeah, the Sd.Kfz 7 was the prime mover most of the time.

FYI - Someone makes a resin artillery conversion body for the Famo. Then you can have all the seats you need!

Total weight of the 88mm gun and carriage is approx 5.29 tons. The FAMO has a drawing weight of 18 tons. That’s serious overkill. You could always have it drawing two 88s, that would be cool!

I have to agree with Hohenstaufen. A famo pulling an 88 would just not be done. They were few and would not be on the same part of a battlefield as the 88 unless there was a headlong retreat going on.
Even if you are not modeling a towing situation, leave the wheels on the 88 even in firing position as occurred not infrequently as it is really cool.

Thanks folks. Enough of the procrastinating!! I’ve decided to go with the AFV Club 35088 88mm. And the Trumpeter 5531 Half track.

Tell my why I’m wrong? But be gentle on me.

I like the heavy Tamiya 35239 half track. I have just finished a RFM Panzer iv J. So I may pair the two of them in a diorama.

Keep in mind I’m a kit builder not a WW2 historical rivet counter.

I don’t think you have anything to worry about with the '88:

Trumpeter kits in general seem to have a lot of accuracy/fit/detail issues according to reviews. I can’t comment as never built one. so, happy building!

Comparison review of Bronco and Trumpeter Sd.Kfz. 6.
The review is about the Flak carriers but the parts about chassis and cab et.c. still apply
https://www.perthmilitarymodelling.com/reviews/vehicles/5ton_flak/5ton_flak.html