Help me choose A9 or A10 cruiser

Okay, I’m moving to the states in a couple weeks and as a gift to myself I’m going to order a kit from Andy’s hobby HQ. For those American members you have it so good! Between Andy’s hobby HQ and sprue bros you have some great selection from some great suppliers. Shipping to my new address is $8, to my current one in Canada it’s $40+

. Needless to say due to this I’ve put off buying some kits I’m very interested in.

I have an aber 2 pounder sitting around so I’ve settled on getting a gecko cruiser tank. Trouble is I can’t decide between the A9 and the A10. The A9: 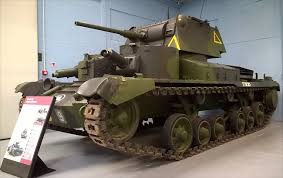 A9 Cruiser tanks of the 10th Hussars go to war in France May 1940. What happens? This Restored A9 Cruiser MkI tank can be seen at Bovington Tank Museum.

Is a cool little machine with those funky twin Vickers turrets and a crew of 6, yes 6! In that small vehicle. The A10 was a redesign of the A9 to up armor it and make it simpler: 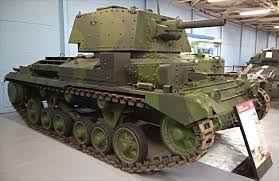 The Tank, Cruiser, Mk II (A10), was a cruiser tank developed alongside the A9 cruiser tank, and was intended to be a heavier, infantry tank version of that type. In practice, it was not deemed suitable for the infantry tank role and was classified as a "heavy cruiser". The A10 was developed by Sir John Carden of Vickers in 1934 by the adaptation of his A9 design. The A10 specification called for armour of up to 1 inch (25 mm) standard (the A9 was 14 mm (0.55 in)); a speed of 10 mph (16 km/h))...

While not as unique it saw more service in North Africa and later Greece. The chassis for the A9 and A10 would later be used in development of the valentine.

My dilemma is that I can only get one and I can’t choose. Which would you get and why?

I’m leaning towards the A9 cuz I like obscure stuff

I think there are reviews on Perth’s site?

Pick the A9, for those little extra turrets.

For its sheer prewar weirdness, I’d go with the A9.

Go the A9. That was what I went with and was not disappointed with its uniqueness and impracticality…

A9, back when they thought more was better.

You'll save money with our large selection of high quality plastic and resin model kits, as well as the tools and supplies needed to build and fully finish them.

I had both in my hands at Armorcon; I bought the A9 for it’s uniqueness with the 2 sub-turrets. It looks cooler. After opening the kit on the spot, I immediately went back to the vendor and did myself the huge favor of purchasing the Masterclub Valentine tracks for it. The kit tracks are 4 parts per link, trapping end pins between upper and lower halves, connected to the next link. Not for me. The rest of the kit is gorgeous though. I too threw in an Aber 2 pounder from the barrel bin. Comes with plenty of PE in the box. Get the A9.

Why are you coin tossing, get both!

It’s kinda like building the same kit twice. Some people aren’t into that, ya know.

Oh yeah! Heh heh…. Who would do that…

Alight @Mead93, if I’m expected to be useful and practical I’m going with the A9 for the whacky factor.

Once you start travelling down the Road of Endless Variants you are truly s-c-r-e-w-e-d.
There is no turning back once THAT bug has bitten you.
And then there is the MTLB chassis with all the various variants and other Soviet/Russian stuff.
Variants, variants all over the place, they are like swarming butterflies, fluttering all over the place.
It can drive a sensible stash manager to tears

Please define, does not compute?

Sounds like you should get the A9 for now, and when circumstances permit it you can get the A10 to go with it!

A9 is winning out almost unchallenged here! A9 it is I love the pre war wackiness of it. The two vickers turrets look ridiculous. and the thought of 6 guys in that tank makes me laugh.

@SSGToms I was wondering if the A9 and A10 used valentine tracks given they used the same chassis. If so I have a left over set from my archer build

@Canmedic i strongly considered getting both. But I’ve only got one metal barrel (quickly checks Andy’s hobby HQ to find he has another barrel in stock). Shoot, maybe I’ll have to get both

Oh yeah! Heh heh…. Who would do that…

There was a time when I had about 30 completed M113s in my collection and plans for another dozen. Then one day I suddenly discovered I couldn’t face another one anytime soon…