100% accuracy to the film is not expected. The modeller should attempt to get it as close as possible but if the movie makers don’t have to be exact, then neither should we. Slightly oversize decals, lettering not quite the right font, etc is all acceptable. A Tiger 1 painted and marked like the one in Kelly’s Heroes will be acceptable, but a T34 converted to look like the Tiger as it was done in the movie would be soooooo much better

. Same for things like FV432 based Stug’s etc. A standard Stug will be accepted). Doing an F16 and calling it as representing the F14 from Top Gun (the original) is not okay!

Sooo… using a kit of a Type VII sub, because the one in the film is supposed to be a Type VII is perfectly fine.

and as Tom says, the one with a boat inside would be ‘Sehr Cool’

Better with the music: 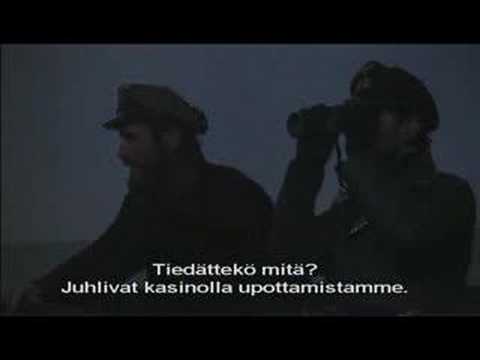 I won’t be taking part - on a hiatus from modelling until I’ve finished restoring a caravan - but I am really enjoying watching this group build. The variety is fantastic.

Doing my own research on Michael Caine’s ride in ABTF… and realised, there are at least 2 Humbers used for him, maybe more:

In this pic, the Humber is a very Dark green with what appears to be black camo. The shovel is all very dark, the handgrip in front of his left hand appears angled in line with the edge of the roof and the vehicle has an aerial. Note the the black camo on the driver’s visor encompasses the two vertical bolts: 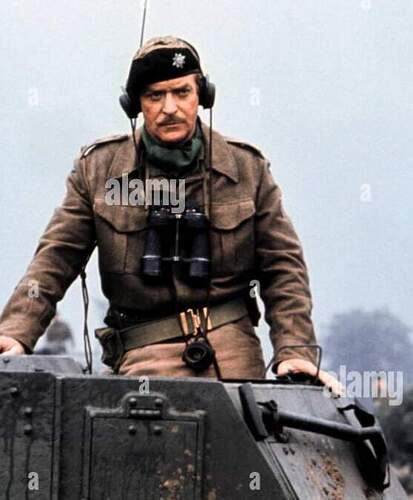 In this pic, although a brighter colour, the vehicle appears a lighter green (and possibly mottled with SCC2 brown?), the shovel is lighter coloured with a very light T piece, and the handle is not angled. It also has an aerial. Note the drivers visor flap, the darker ‘camo’ on it appears to be above the two vertical bolt heads: 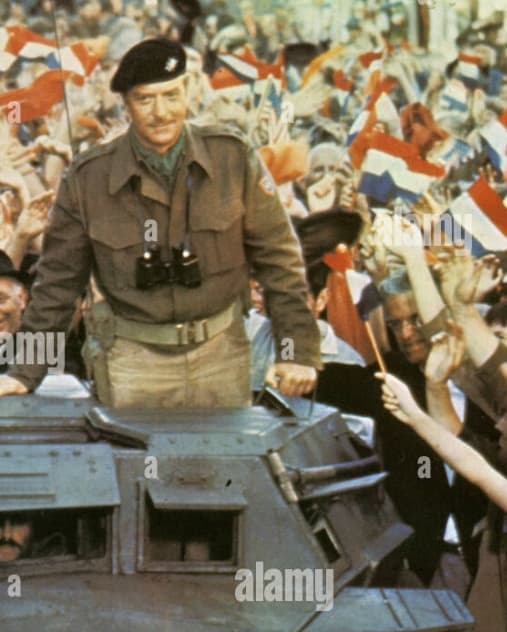 In this pic, the vehicle clearly has stowage on the engine deck and a camo net, distinct camo on the hatch cover and upper hull plus the T piece of the shovel handle pocking up inside the handgrip wire is dark. There is also an aerial.Note also the style of Binoculars here is different to Pic 2. I’d say this pic and Pic one were taken around the same time of the same vehicle. 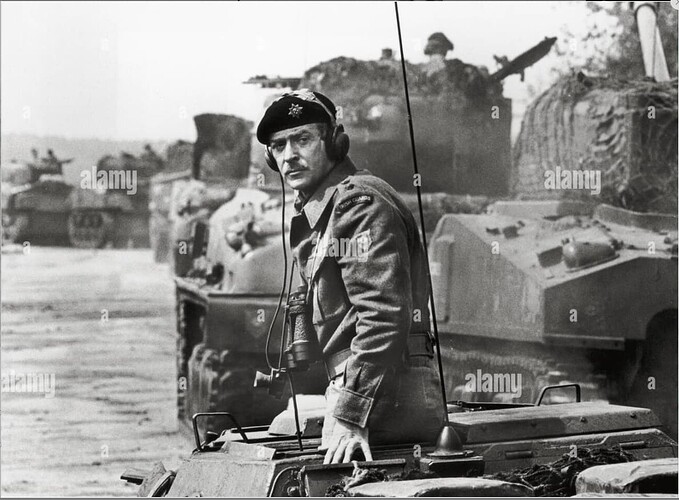 In this pic, no stowage apart from a tarp and it has the light T handled shovel so is probably the same as pic 2, but no aerial (possibly removed for the shot):

Thanks for the comments, guys. I Will stick with my type VII then

On the topic of WWII Naval scenes, what about a model of models as depicted in a movie? 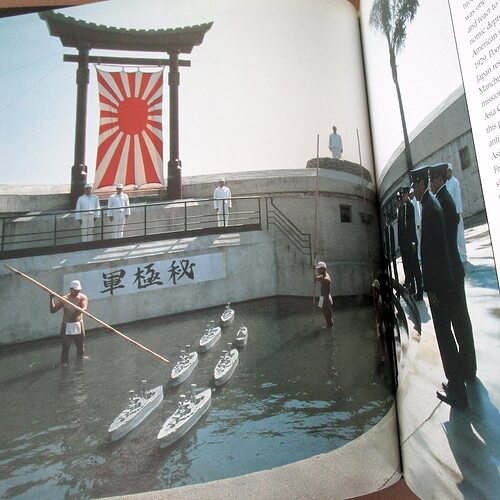 You are a thief of your own joy…

Yes, sometimes I am my own worst enemy. I have now been told that the first and third of these pics were taken after the movie was shot. They were publicity pictures taken with a backdrop. This is why the bino’s are different too.

Reviewing the DVD at the moment, and it appears all but the last are definitely not related to the actual film.

Okay, I have been through the film again. It has been quite a while since I watched it. Still enjoyable!

After reviewing all the film shots, I have to agree that some of the above are certainly staged publicity shots, or at the very least, taken from the cutting room floor.

The first pic is supposed to be from this sequence, where in the film smoke actually obscures everything and the headphones magically disappear: 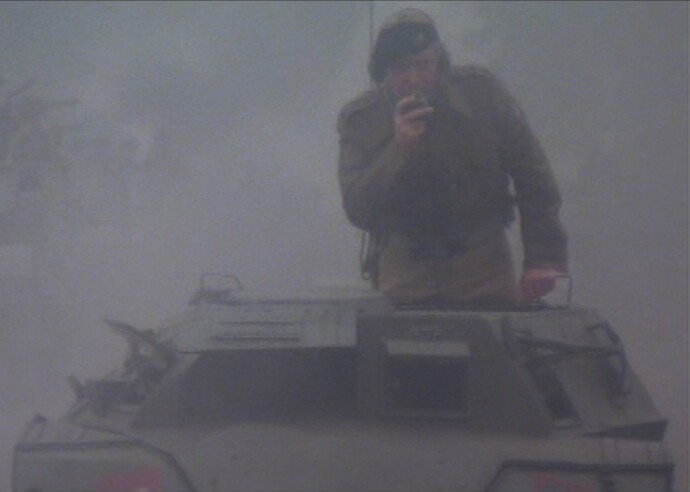 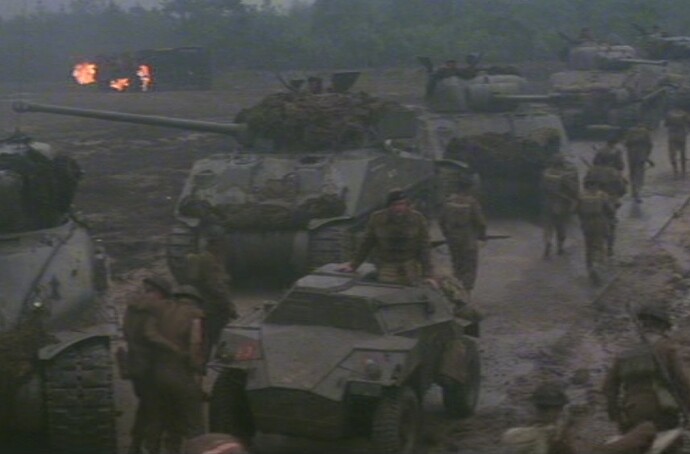 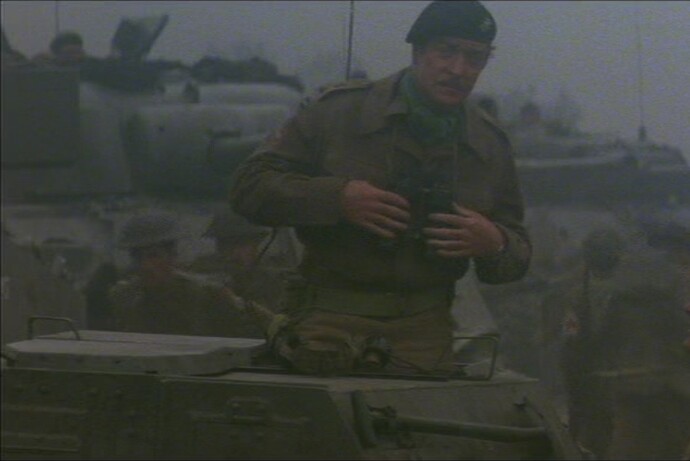 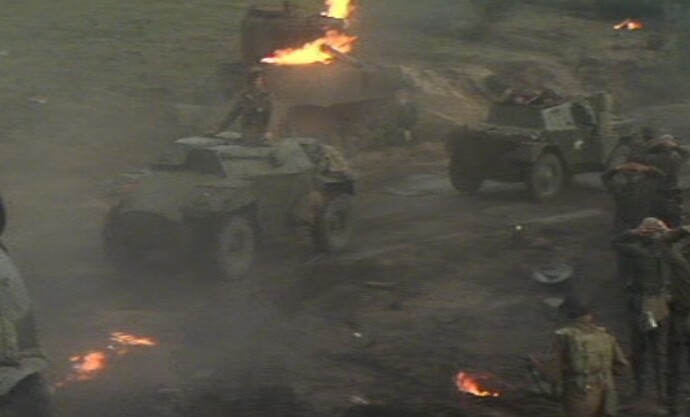 The second pic is from a sequence which is shown shot much lower down - this pic possibly an outtake?

Third pic. In the film, the line of Shermans is sans Michael, so possibly a backdrop projection as per the magazine article my friend quoted.

The last one is from the film. 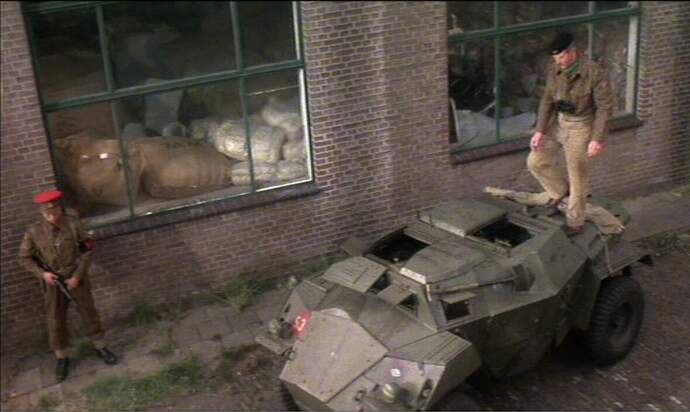 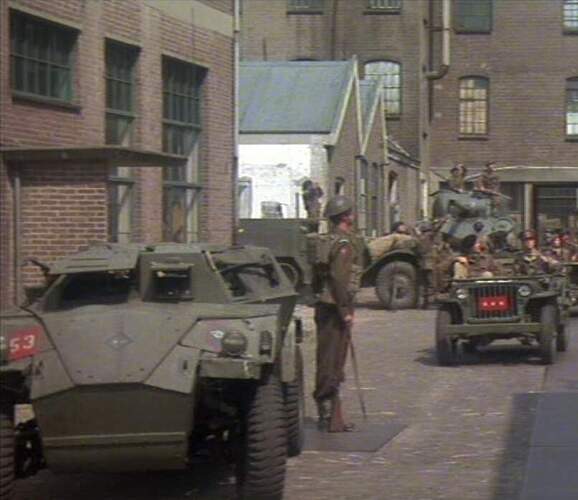 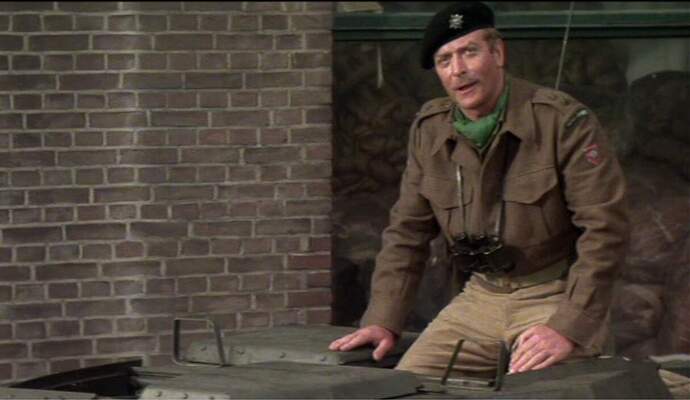 “Well, I’ve got nothing else planned for this afternoon”

…and for the fun of it, the rear shot from the film: 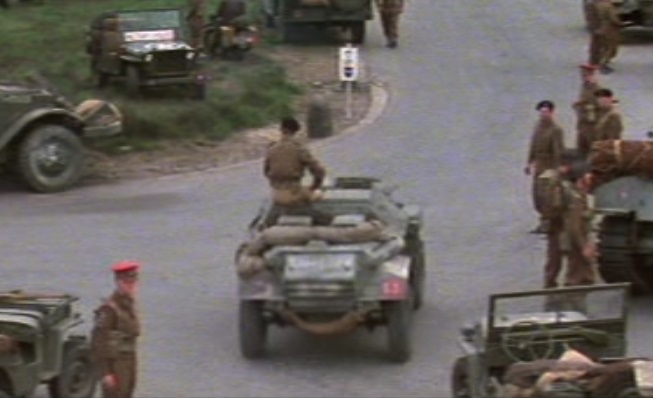 Look at the rear deck in this pic which is supposed to be Michael driving away after getting in the vehicle in the pic in front of the building. Supposed to be minutes apart but the rear shot shows magically appearing stowage on the rear fender… then look at the smoke obscurred pic where there is a tarp or something on the front fender where the fire Extinguisher is.

Much better colour and resolution on the film stills, showing the vehicle is overall SCC15. The article in the magazine has a mention of the film crew dumping mud on the vehicle thn rubbing it around to make it look “in use” and this is what caused the brown blotches.

OK, I have a couple ideas about building something for this, but a quick question: I have started a conversion/scratch build of a fake T-72 from the movie “Red Dawn”. Could that be entered?
Ken 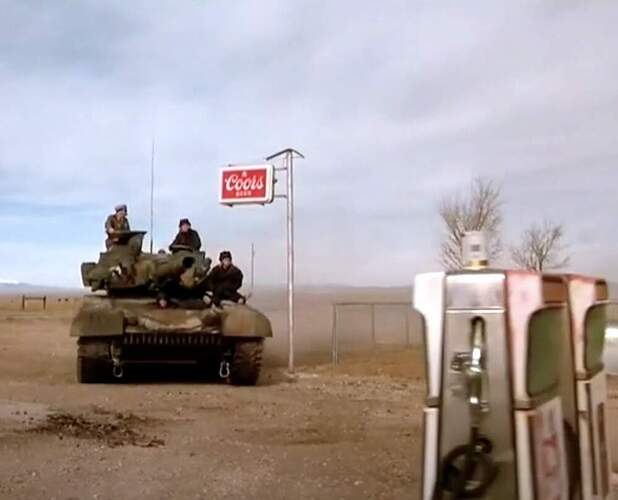 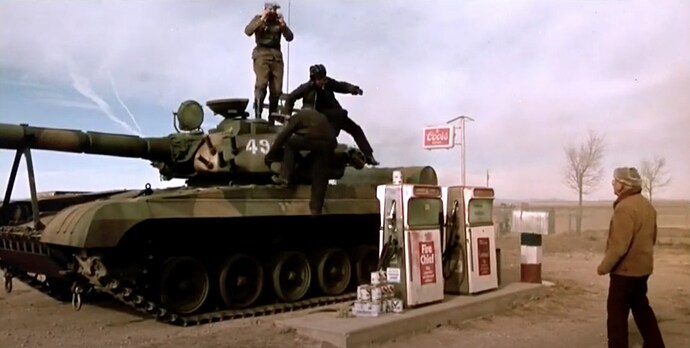 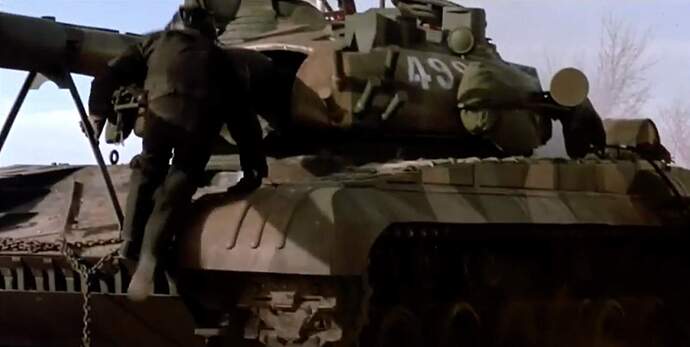 Or you could do the “Russian” tank from the film, actually an M60A1!
Ken

How far along is “started” Ken?

I’d say close to half done. It’s hard to say for sure, I keep running into things to fix or change.
Ken

I’ve rented an M41 tank for Combat! and the props manager had a tussle with the military consultant over how best to paint it to look German. The consultant was insisting on green/brown/tan as per many late-war panzers, but the props guy stood his ground with his new Tamiya Tiger kit that called for grey! Fortunately the Director calmed things down by pointing out the show was being shot in black & white, so nobody would know…

(I grabbed some stills from the episode and chucked them into Photoshop to use the Colorize tool, fully expect them all to come back green/brown/tan, but to my surprise many of them suggested grey instead! Then I looked at the final season, which was shot in colour, and the few “German” vehicles all seemed to be medium grey with dark grey camo. So I used a combo of Tamiya Medium Grey, Sky Grey, and German Grey to get what looks decidedly arctic. At least it’ll stand out from the crowd!) 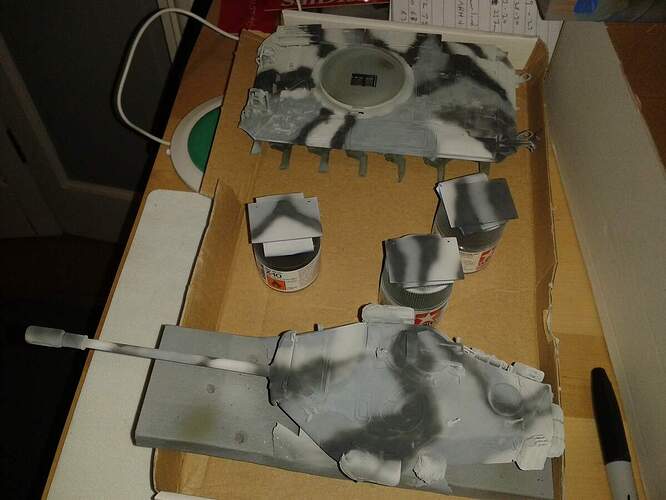 Yes Tom. Back then, film makers all believed all German vehicles were grey! It is up there with the two markings on the side of helmets, dark green collar tabs, etc.

Ken, as a general rule 25% done is usually accepted if part built models are included. However, if you post some pics, we may be a bit more generous here.

Here’s a sharper image of an M51 similar to the one in the movie. 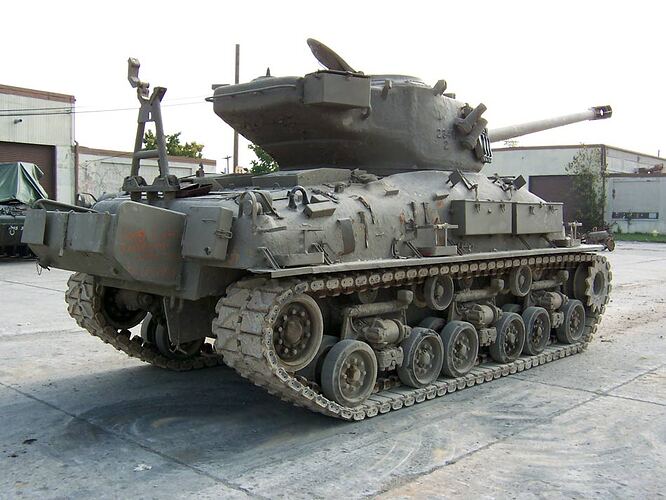 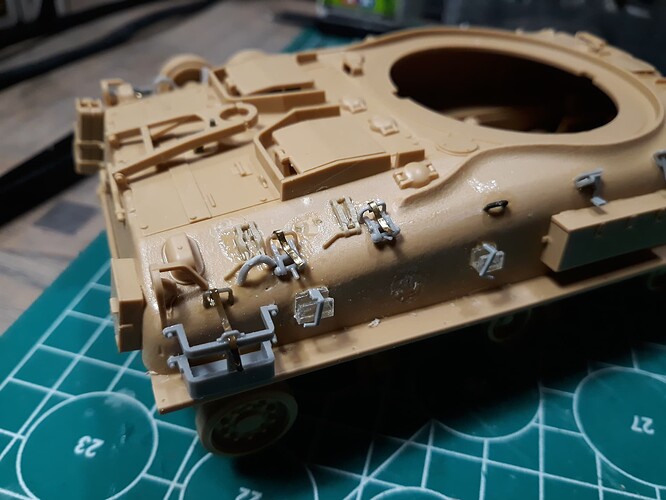 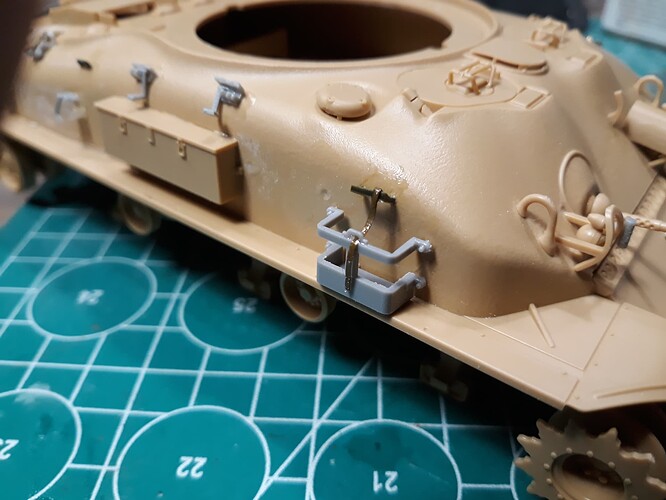 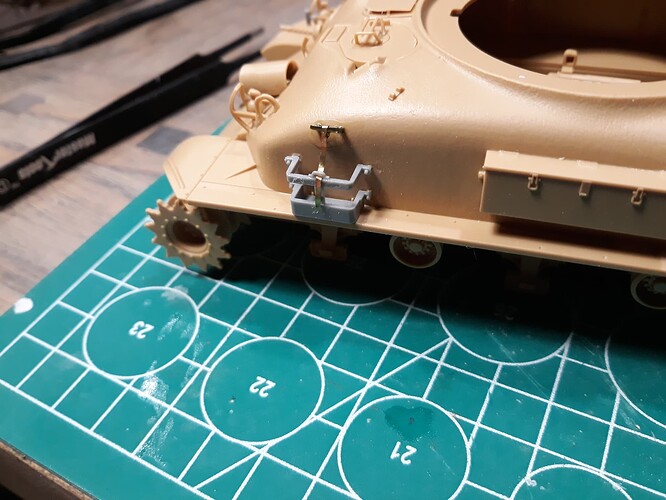 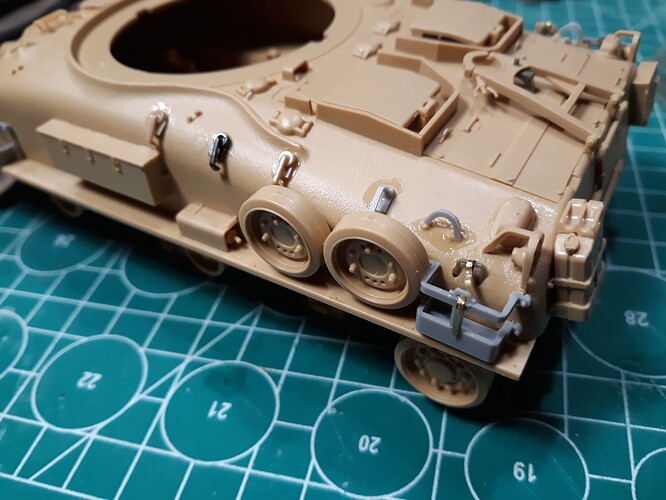 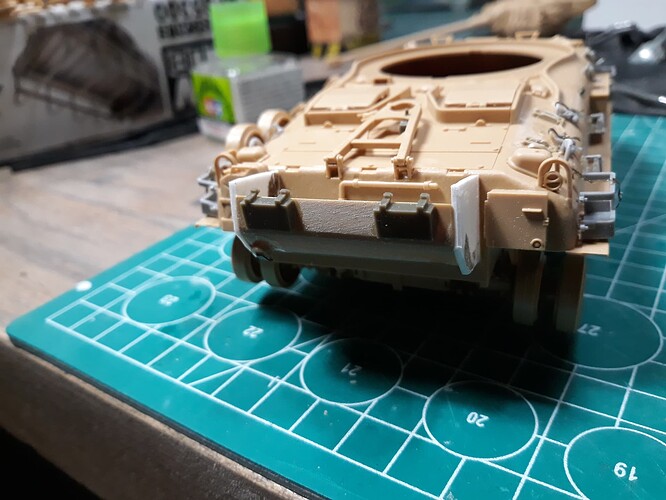 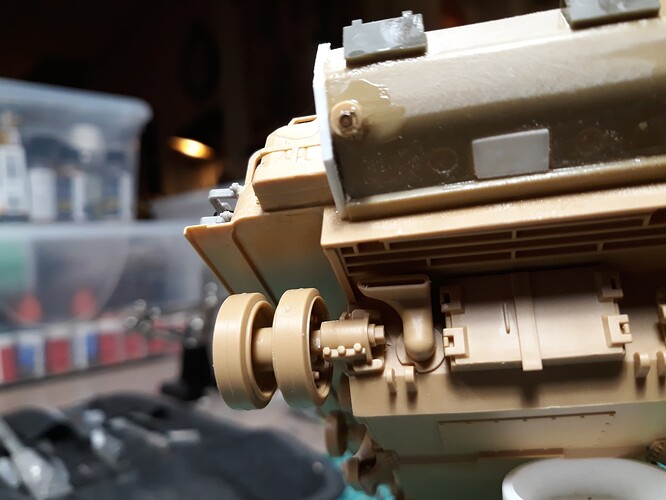 Thats ok, I have another idea I can do for this. I may post a couple photos of it in the scratch built/conversions thread.
Ken

Now suppose one has already kitbashed one of the suggestions, would it be acceptable to enter that or does one need a totally new project?