Thanks Peter. Now they have fully dried I think they look even better than in the posted images. I would say overall, after the Dragon smart kit late Panther G I did for the Bulgarian build, this Ch2 is probably the nicest and best fitting kit I have done. I hope the RFM M1A2 SEP V2 is equally as good. There are no real issues on any front with it, and that is with indi 3 piece track links, a 7 part barrel and a 5 part turret !!
In fact that’s wrong, it’s an 8 piece barrel as there is a bit of PE that is meant to be the MRS access cover.

As I have finished my M10 Achilles entrie for the Tank destroyers 2 campaign I will be starting my M3 command car, I just swapped the starting kit from the earlier mentioned Tamiya M21 for the Dragon IDF M3 #05, this version: 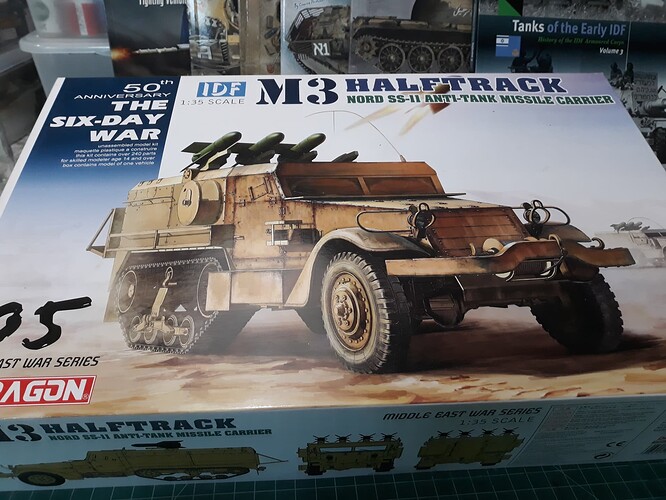 01 Dragon M3 halftrack #051920×1440 224 KB
mainly because I like the way the sides of this back compartment are formed, and the difference in demensions between the Dragon and Tamiya version would mean a lot more work …
I will be using this kit with it: 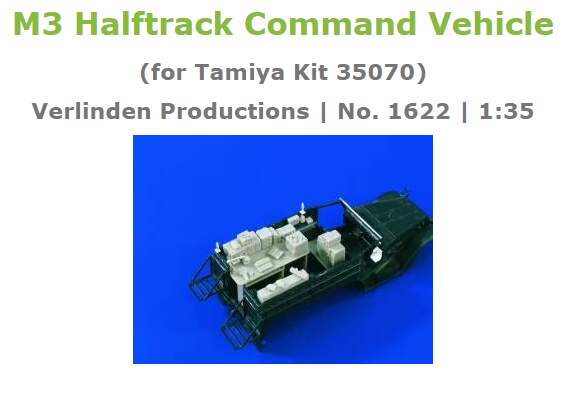 And so it begins. Tamiya’s venerable M577 with Eduard’s Exterior PE, SKP Model’s Lenses and Taillights, Legend’s resin Detailing Set, and AFV Club’s Workable Tracks (which really are NOT workable). 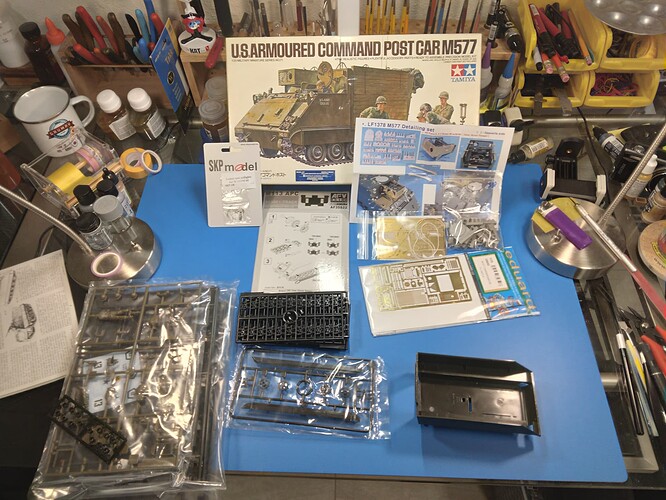 I’ve only just started removing some of the fixture points on the underside of the hull and ramp along with filling in the motorization holes on the bottom. 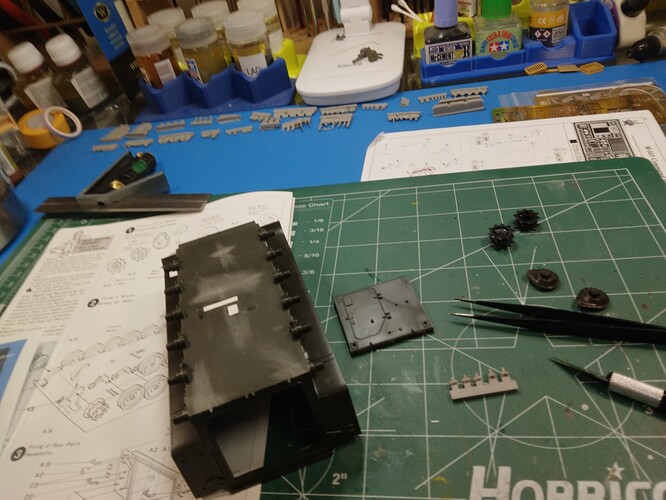 Nice. The venerable old Tamiya M113 series. I built a couple of these in my day.

It always surprised me that the idler is about the only thing no aftermarket set ever addressed.

How the track links - big sink marks in your set?

There are some sink marks on the outer pads. Not too bad though. I’ll either fill them or cover them up with some “mud.” Most likely fill though. 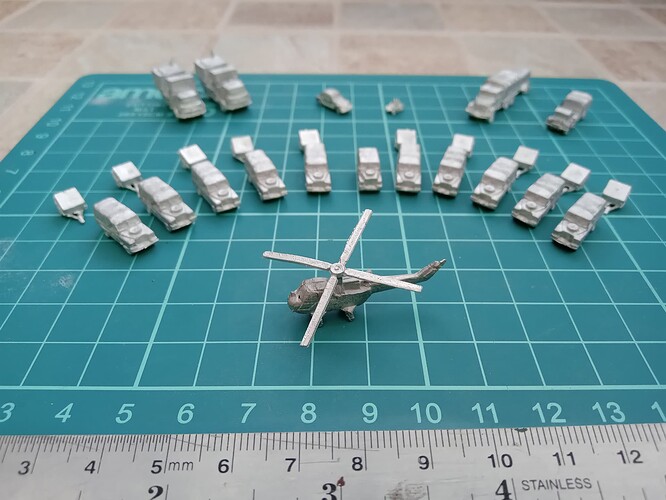 More for my 1:300 diorama of Corps Main, from the wargaming firm Heroics & Ros - just arrived. Nearly every Staff complex that formed the HQ had Land Rovers (and trailers) so I felt I had to top-up a bit. Some will be utilised for a further HQ dio of a Divisional HQ.

Additional models are of a US truck, that somehow, I’ve got to convert to an office variant, ditto the Gama Goat; ‘not too sure how to achieve this as they are cast in quite a hard metal. There was nearly always a US presence on our exercises back then. Also, at the rear (top left) are 2 x Signals vehicles on the Bedford MK chassis; the MK had only just come into service back then so I may have to swap/modify these to model the earlier RL. I’ll also have to manufacture the respective masts: 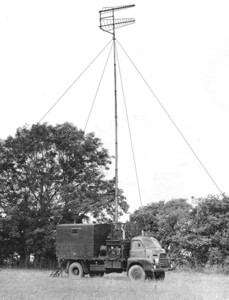 Others are a VW Beetle as part of a German road will be depicted and I thought I needed an indication of civilian traffic; a motorcycle combination which I intend to modify as a singleton cycle to represent the Postal & Courier element of the Royal Engineers, who despatched some of our paperwork. In this scale it’s not much more than a blob so I may not bother. Amongst the Land Rovers is the half-ton air portable variant which I thought I’d try and modify to a Minerva Land Rover to portray the Belgian LO’s vehicle. I’m beginning to find that working in this scale is more demanding than I thought it would be.

Lastly, at the front is what is meant to be a Westland Wasp which I thought would be easy enough to convert into a Scout, the helicopter in use at the time. Looking at this very simplified casting I’m now not so sure(!)

Just a quick update to keep @G-man69 happy as he thinks I’m slacking off lol…
Nomad is coming together. 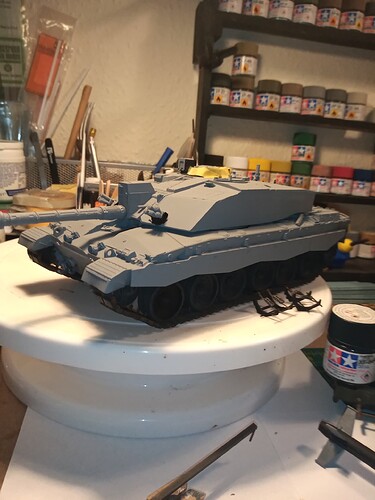 I was going to do the hull and turret in flat black, but I’m having second thoughts now as it comes out pretty dull.
Bearing in mind this was a pretty important parade for the RTR, and Nomad was center stage for it, it would of been painted and looked after right up to the drive on during the parade so it wouldn’t have had chance to get dirty upto the drive on. It did rain during the parade so there is some colour variation, but I want to go for a pre drive on look.
Im thinking of going back to the Halfords Matt black spray I’ve used before, it gives a nice crisp coat, and it leaves a very very faint satin look, … Will give that some thought as I am waiting for my black panel liner and med grey wash to arrive from AMS…

John I think I’d go with a satin black, too. You can always dull it down a little later.

Yeap, I think that’s the course of action I’ll be taking… And the panel liner and wash arrived just now 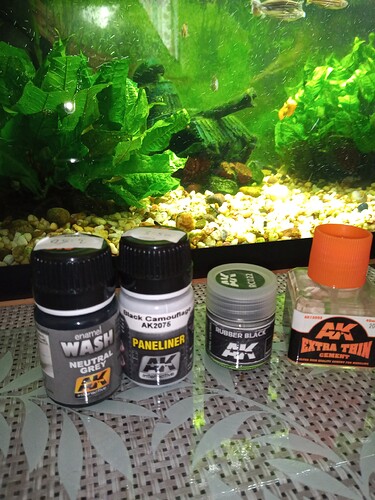 And yes …there is a tank in my mini aquarium lol

You know John, the mr surfacer 1500 black primer leaves a really nice finish, especially if used with mr levelling thinner, could be a perfect base colour for this… 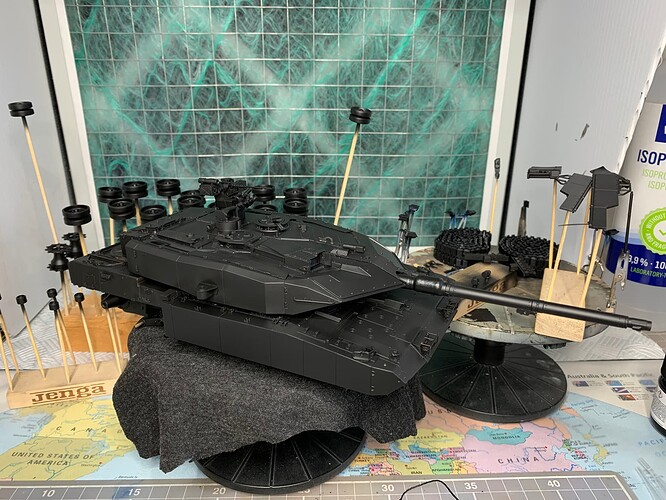 That looks very good like that Jim, I’d forgotten all about that primer you used on the Leo … The Mr S black primary is definitely going on the to get list when I do my next order from wherever… Good call

So… Nomad is now officially Halfords Matt black with a faint hint of satin.

Pretty happy how it turned out. 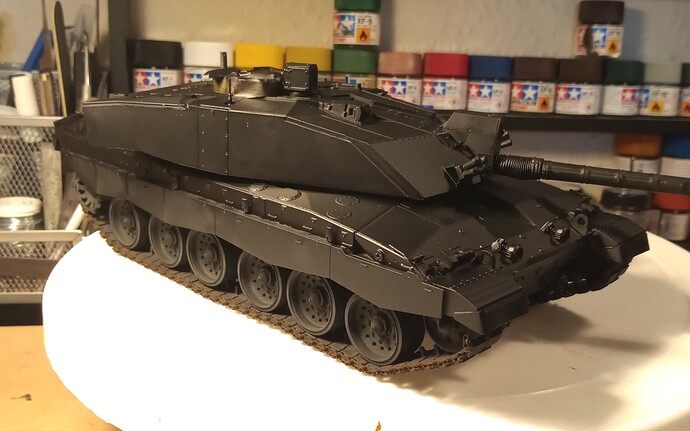 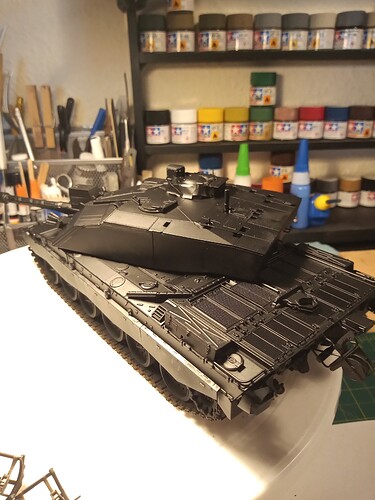 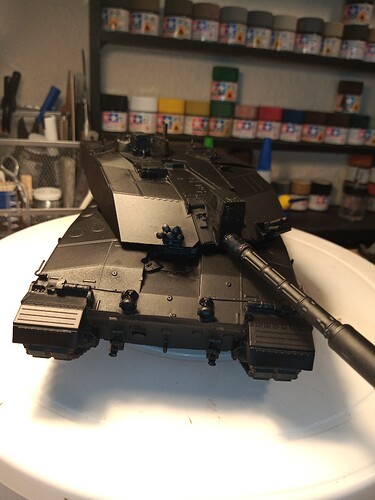 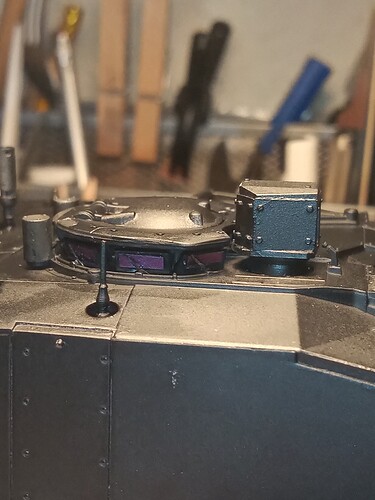 I may give it one more quick overspray to catch a couple of areas that were thin, but will decide later as the wash and filter may take of that…
I also sprayed my old Tiger 1 in the black 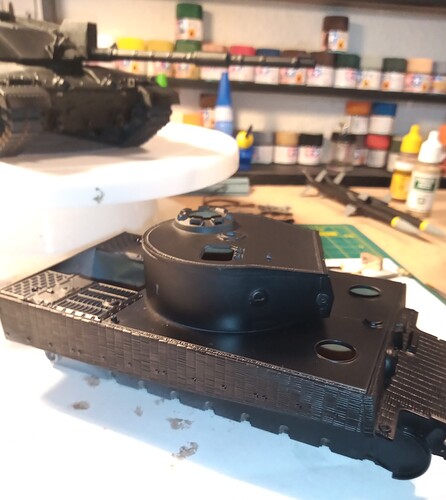 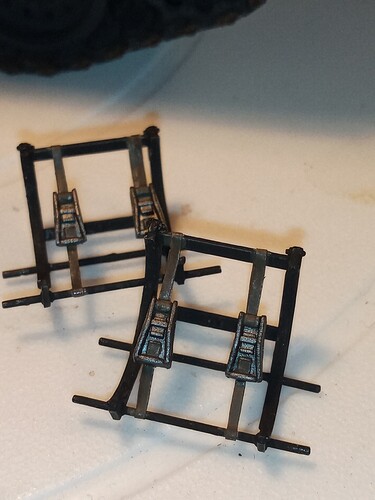 So that’s a tank tank in the water?
Lovely Challenger. Now have AC/DC “Back In Black” running in my head…

May it not be “Highway to Hell”

Lol… Yeah, it’s a tank tank in the water tank… SWMBO got it for me last Xmas as a joke pressie as she knows of my love of tanks lol… She also got me the mini aquarium at the same time…
I do like the Chally in black … looks mean…

Ton of cool builds for this campaign. Very inspiring - now I have to see if I can get started…

Got all the bits on the big old back end …
A frame bar, butterfly, drum frames and now the lights are unmasked. Have to paint the T piece in the butterfly mount. 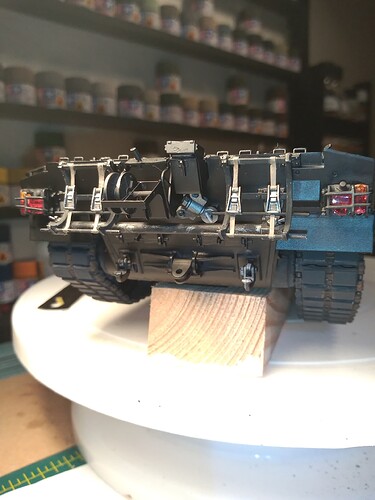 I did end up doing another very quick overspray on some of the areas on the hull and turret that looked thin. Glad I did and it did make a difference.

Have also been playing about with the neutral grey wash on the flat surfaces and the Black cam panel liner on some areas of Zimmerit and turret joins. 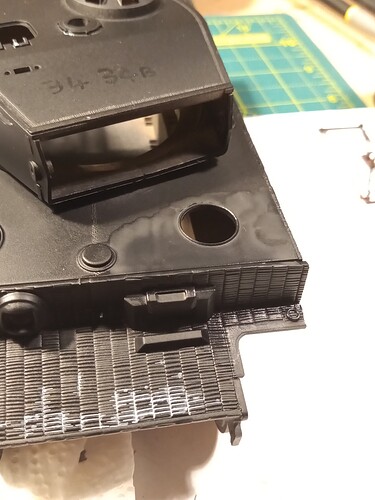 Panel liner on the zim and turret joins. 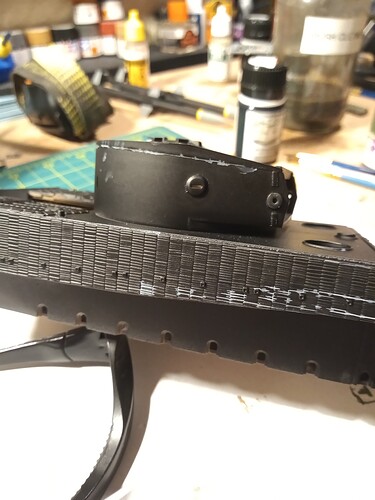 Wash on side of turret and dvrs hatch again 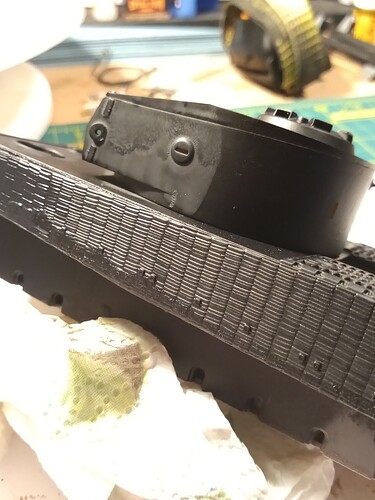 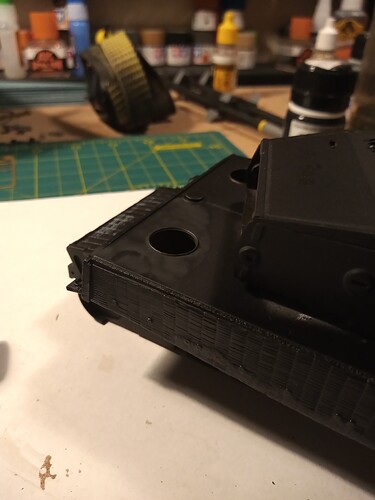 Bearing in mind this is neat, I think once it’s thinned down, I will definitely get the finish I want over the black as it’s only being applied in certain areas, and not all over…?

Are you doing the mud flaps a matt black or leaving them.