Certain areas are going to get a Tamiya flat black or rubber black hand brush to give them a dull / matt finish, and there will be some very very light dust to the running gear, very bottom of side plates and the rear hull plate.

when new, the actual rubber mud flaps do come with a very slight sheen to them, so there are not a normal matt to begin life … that comes in time and wear and tear.
Also, the greyer areas on Nomad are down to it being rainy on the actual parade day as it took place and leaving run off marks on it which acted with the dust already there from the drive to the parade itself.

So many bits to remove or spots to fill in prep for the Legends set. Almost everything will be removed from the roof plate. 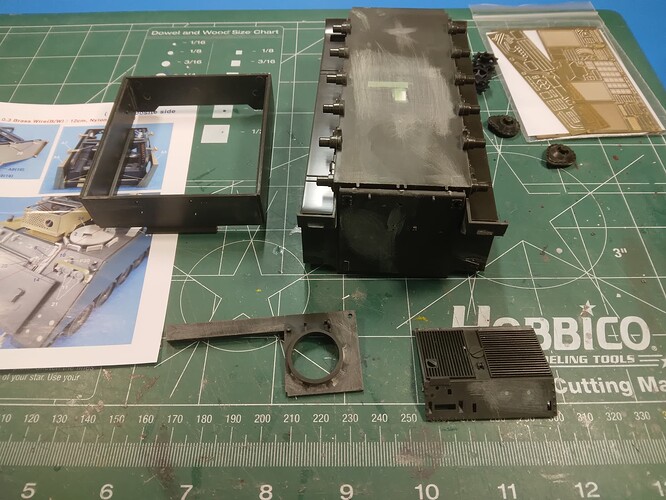 I didn’t realize initially that this was Tamiya’s M113 with added M577 parts until it was mentioned. Cool thing is IF I can replicate it properly, is where the “extension” for the M577 along the sides and rear were added, there’s a weld line. I distinctly remember one or more of my M577’s had this. Way back 30 or 40 years I probably knew what this was from - now I’m remembering it. Heh.

here the “extension” for the M577 along the sides and rear were added, there’s a weld line. I distinctly remember one or more of my M577’s had this.

My Entry for this campaign: IAI RC2 Kfir Tsilum 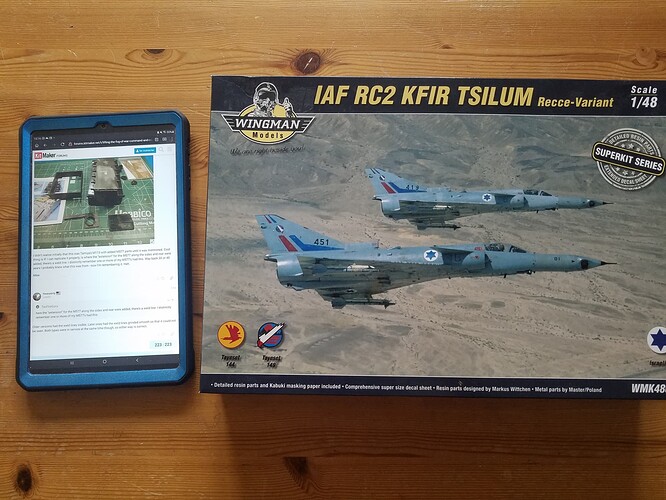 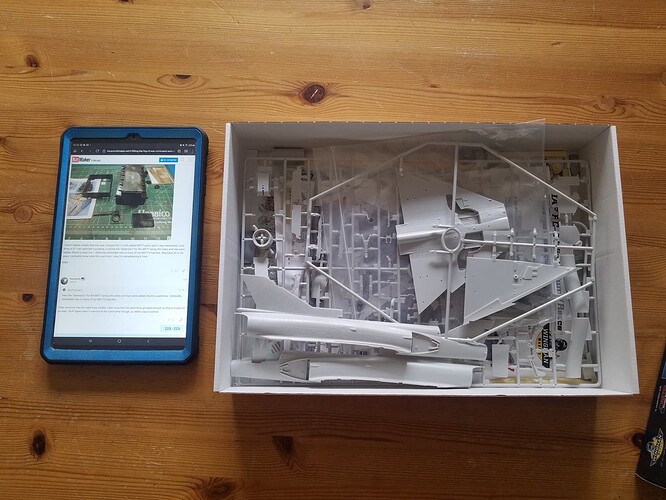 I haven’t started working on them yet. I’ve only opened the blisters and prepared some resin pieces.

Well, I have started, and the halftrack is starting to take shape 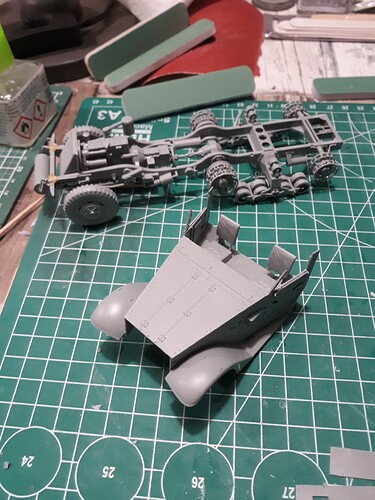 Thanks HeavyArty. I recall having both. In this case, I’ll give it a whirl putting welds on it.

Happy to say that all the removal of all molded on parts that will be replaced with either Legend or Eduard parts is complete. The 4-duece generator is built and painted the 70’s (around there anyway) OD. 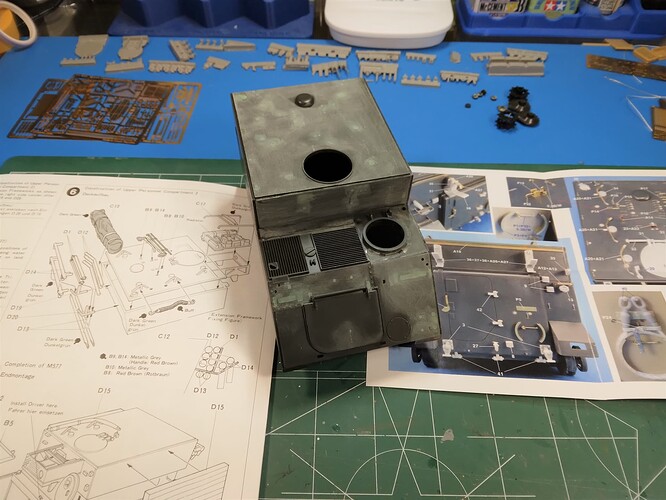 Sometime back I picked up a few of the Perfect Scale Modelbau “spade boxes.” One of these will be placed on the roof as all my M577’s seemed to have one of those.

Little update on the M3:drivers part is nearly finished… 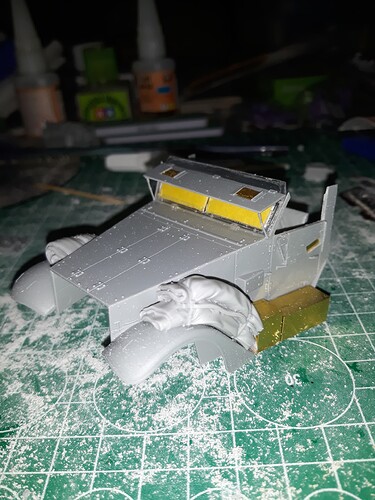 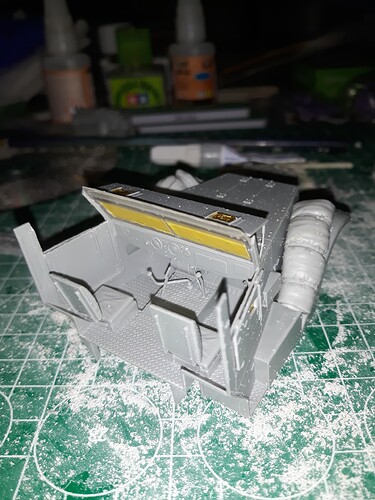 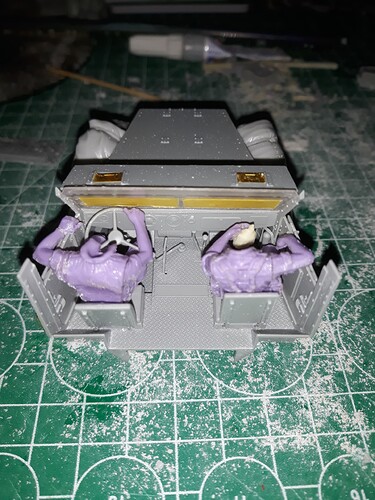 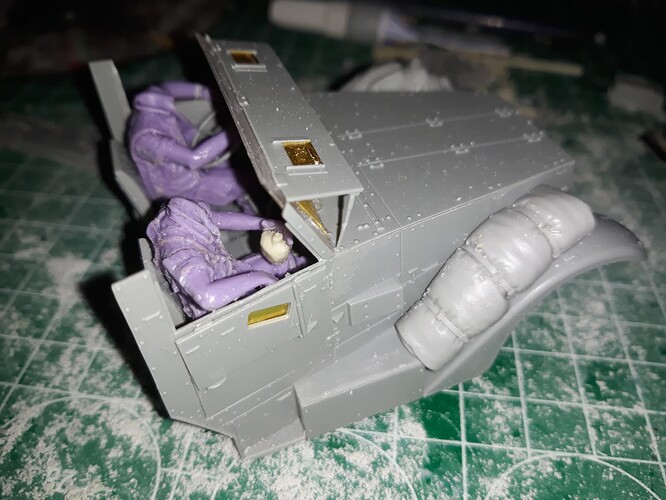 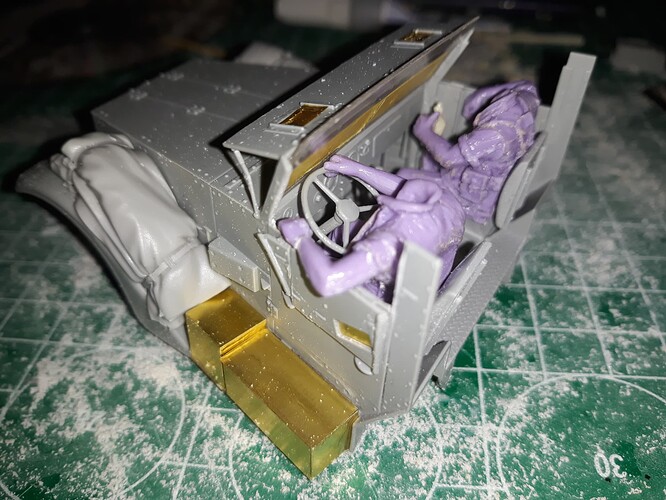 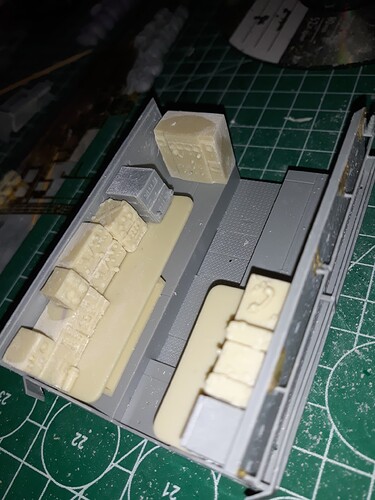 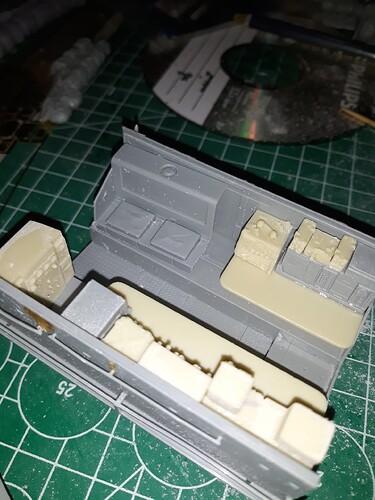 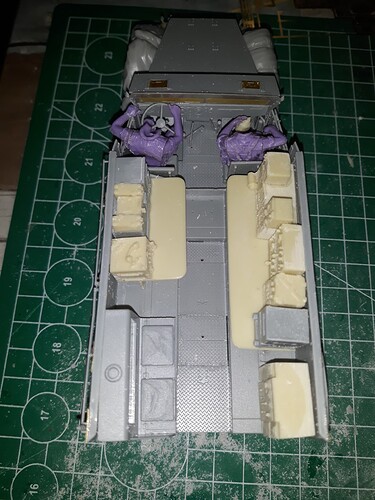 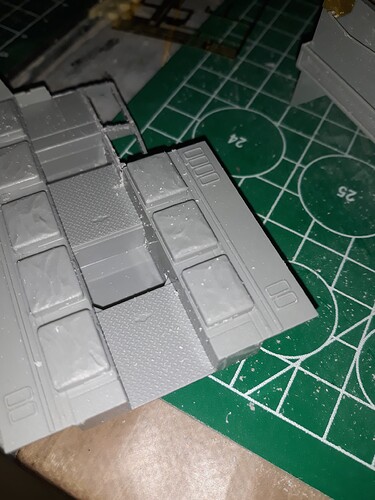 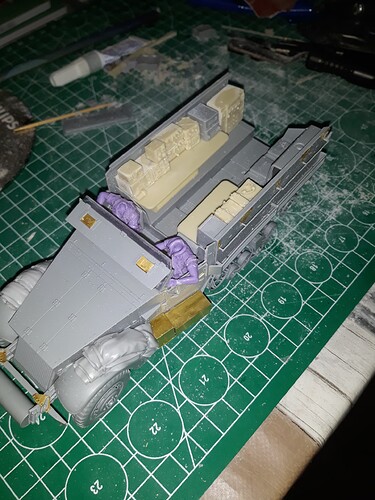 Decided to try a test fit of the RTR flag for Nomad which was flown from the rear antenna base.

I used normal kitchen foil ( I think Don suggested this way as well) as the backing and then micro set and sol.

I made sure the foil was completely smooth before attempting it all. 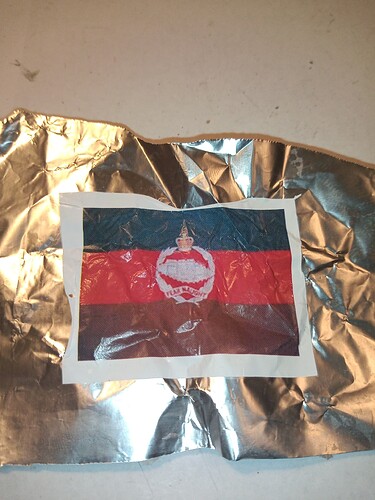 The above trial run was let to fully dry then I really went hands on, crumpled it completely, folded it, then unfolded and that’s the end result… No real damage at all and no visible foil…

Edit. What looks like white areas on the red/brown is just camera light reflection

Looks really good! Was that a decall or a normal piece of paper the flag was printed on?

Self made decal on decal paper. I did one sheet with about 12 flags on it 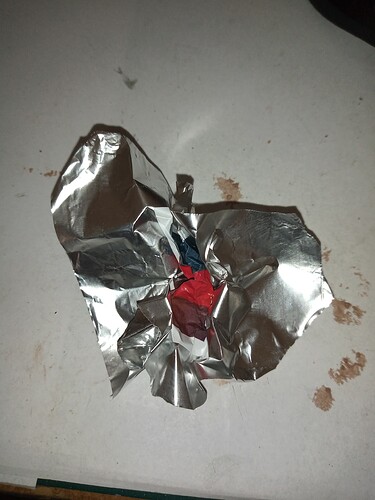 And re-flattened it… Again, almost zero damage (this was the third time I’ve done it now) 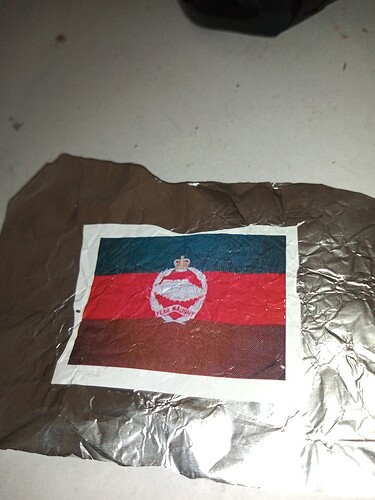 1/24 Masterbox figures primed. The carbines are from Large Scale Armory.

I made the mistake of gluing the female corporal’s arm upright first before tucking in the M4/M203 into her armpit. Hence I made her hold a pistol and gave her an empty holster for two pistols on one figure. 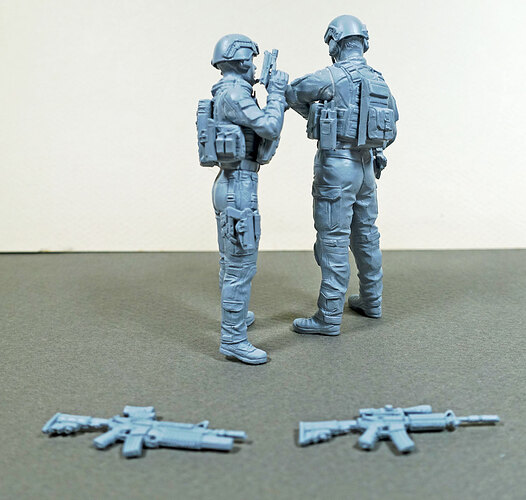 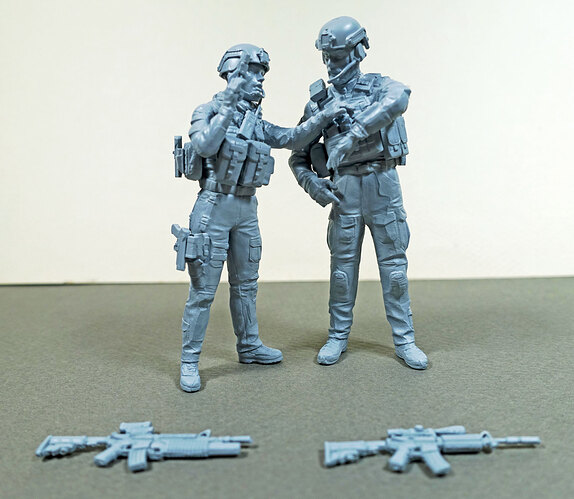 I made her hold a pistol and gave her an empty holster for two pistols on one figure.

@HeavyArty True, but I’m not going to sweat it.

I learned that CA Debonder doesn’t work on Gorilla Glue unless I saw her raised arm and thigh pistol in holster off which I am not going to do.

The only other options would be to have the M4’s buttstock rest on her elbow (not under her arm), or arm her with the original MP5K, which both other options are unrealistic. At least the pistol she’s holding has an underbarrel flashlight.

These aren’t my best or most expensive modern figures so I’m just going to let it fly “as is!”

@Maximus8425 … Can you remember off the top of your head the fitted length of bowman antennas ? I keep thinking 2.3 to 2.5…old age is catching up lol… And no matter what I type, Google isn’t playing nicely …

A gentleman and scholar !!

Update on my build:
Needed 2 radio operators for in the back of the M3, so decided to reuse these: 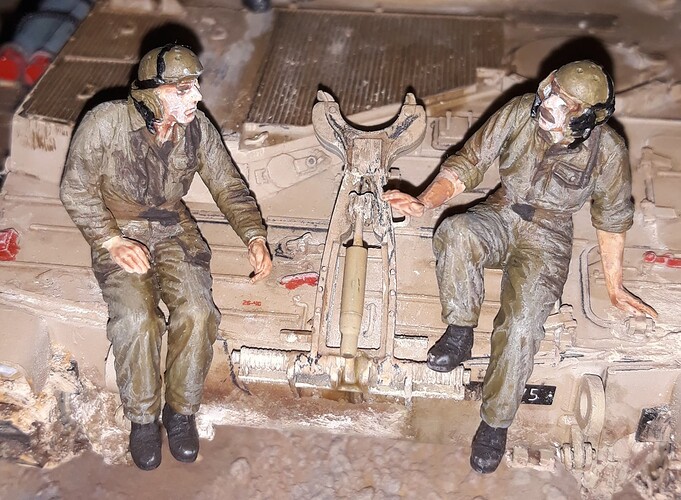 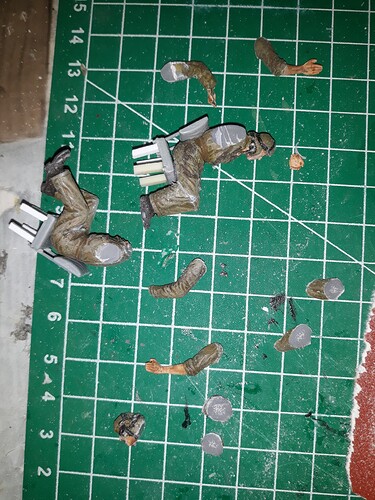 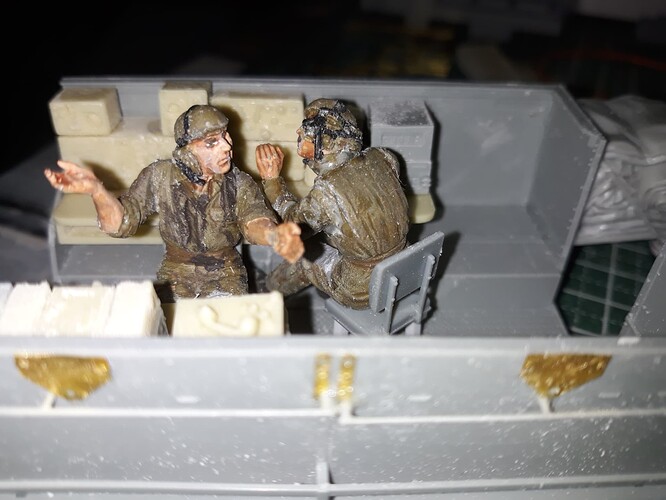 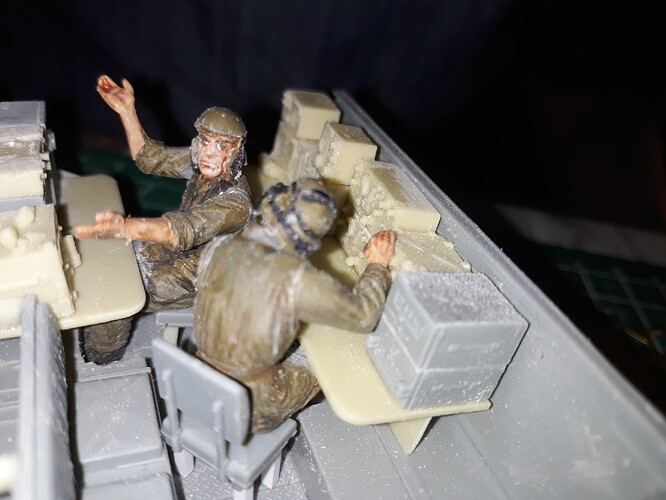 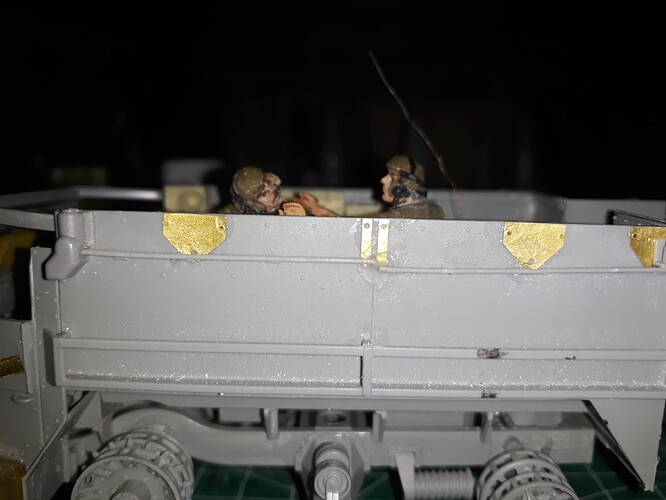 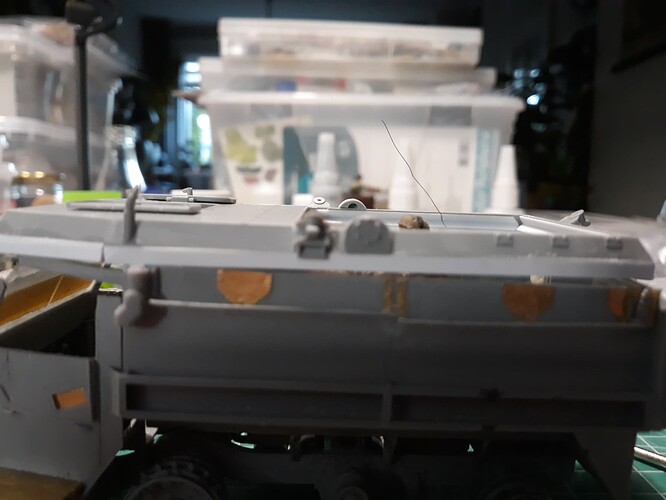 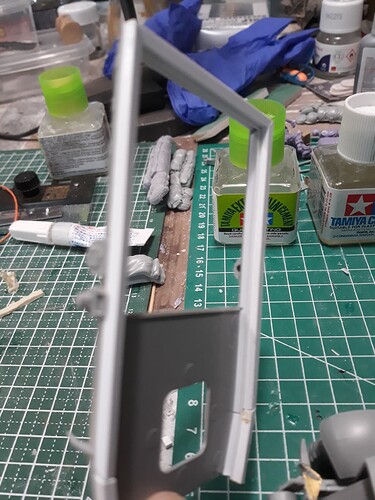 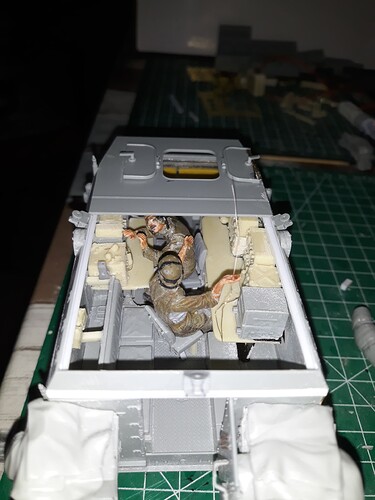 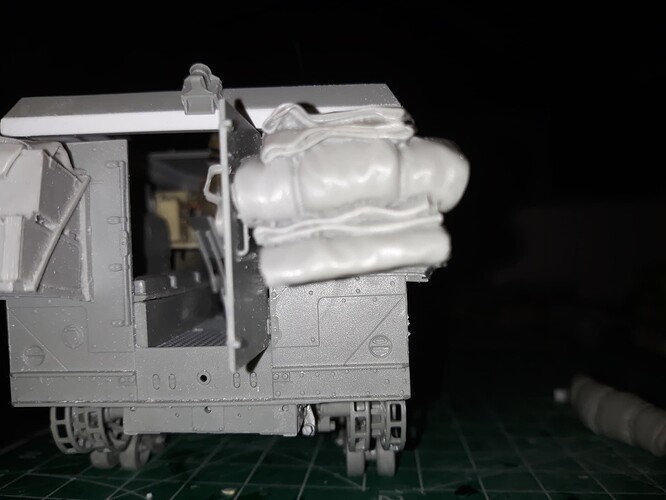 After all, that roof was part of why I switched over from the Tamiya to this Dragon kit… 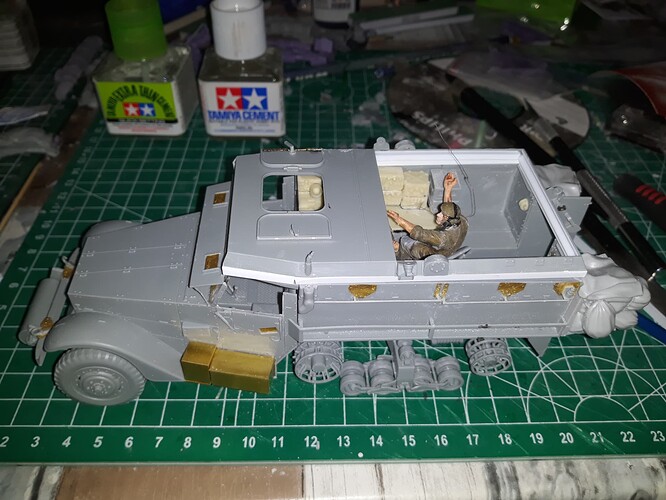