Looking for a better primer

I’ve been using badger stynlrez but I am having some issues with it. No matter what I do it comes out a tad grainy which makes it near impossible to get a good smooth base coat of paint. I’ve tried spraying at high pressure, low pressure, close to the model, far away, straight up and a bit thin. But this stuff doesn’t not like me. I think my climate being very dry is playing a part. I also find it doesn’t like to be sanded so cleaning up the graininess isn’t fun. It also doesn’t adhere to photo etch super well.

Looking for advice on what other people are using and how they find it.

Surprising to me because I find Stynylrez to be the best thing going - covers excellent , doesn’t obscure detail and dries hard and sands well .
Are you adding anything to it or is it old ? It likes to be shot straight from the bottle with a large needle.
What you are describing sounds exactly like what I experienced with Vallejo primers which I tossed for Stynylrez.

I shoot it out of my Paasche VL with the size 5 needle at about 15-20 psi. I’ve heard it’s great stuff from everyone who uses it but it seems not to like me very much

I didn’t like it very much either. It was really smooth but lifted a lot. If RDT says it works well for him I believe him because he does planes with a lot of masking I imagine.

I definitely don’t need acrylics. I already Mr surfacer 500 for filling seams and that stuff is tough as nails. I was thinking about picking up finer stuff for priming.

How does it spray? What thinner do you use for it?

I tried Stynylrez also,love the way it sprays and it levels out real nicely I just hated how it mucked up my airbrush no matter what I did.

I always use the Tamiya Primer in the can,once you learn how to spray it,it goes on great,not too thick or obscuring details,even when I think I might have put on too much it always levels out,and it sands nicely,since it’s enamel it has a great bite,its also good for PE

I need to try this then. Painting PE is my bete noire…

I thin it with Mr Leveling Thinner. I mix it fairly thin. It tells you when it’s too thin and you can add a little more mr surfacer, but you get the hang of a good mix pretty quickly.

I’ll second the idea to use Tamiya rattle can. It covers well, levels out well and the acrylics I use over it don’t lift when i remove the masking

For me, Mr Surfacer 1500 thinned at least 50% with Mr Levelling Thinner. One mist coat then a couple of medium-wet coats and watch the magic!
Current build, soon after priming, no sanding. Black on the underside, Grey on the body. 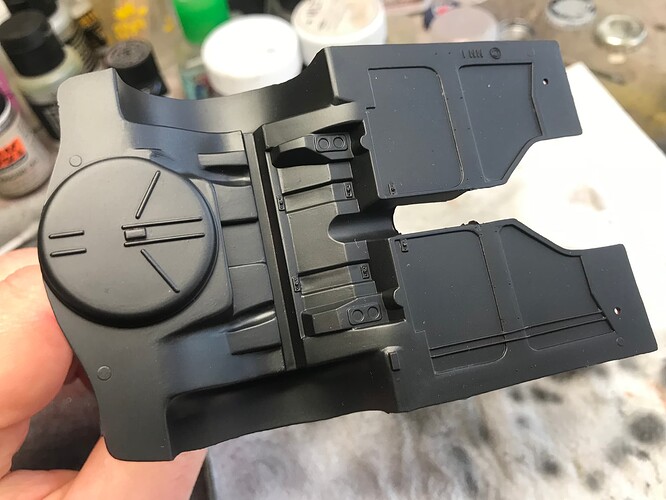 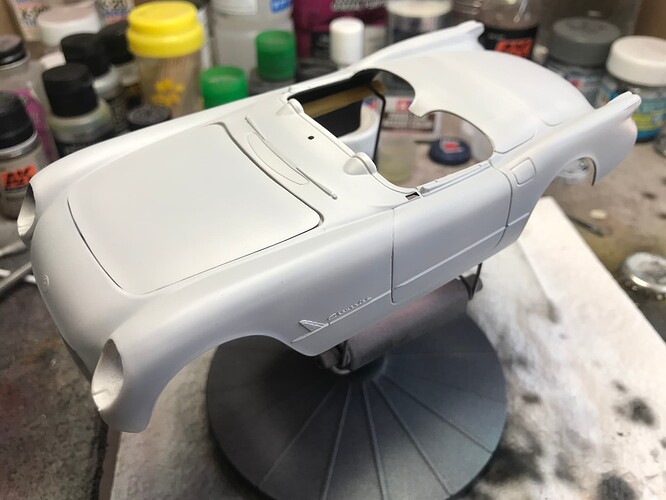 Wow, that seems to have gone on very smooth! Any idea how it works on PE and how well it sands?

It sands beautifully, no issues there. I have very limited experience with PE so I’m not the best qualified to answer on that score. I’ve had no problems with adhesion with the few small parts I’ve primed on aircraft builds, but they don’t get much handling after primer and paint.

@Mead93, me being a painting dinosaur

, few questions about Badger’s Polyurethane Acrylic Stynylrez and how it sprays if you please.

If I had to use primer Mr Surfacer 1500 Black would be first choice out of what I’ve seen.

Lightly sanding entire PE fret on both sides with 1000 grit helps add tooth for any paint or primer before removing any parts.

Bit of track burnishing fluid can also be used to pre-blacken PE parts so if paint flakes off Shiney bare metal won’t be exposed.

For better paint adhesion on PE or white metal something likeVMS Metal Prep 4K should help even the primer stick better.

Thanks for the other advice. Part of why I use primer is 1) to give a good consistent base for paint, 2) o use mostly acrylics which don’t have the same bight 3) I like to lay down a black base.

I think I might go for the Mr surfacer 1500 in black. I suck with rattle cans so I can see that being a mess

I must agree with the mr surfaced 1500, great stuff. I tend to thin 50/50 with mr color levelling thinner and spray around 15psi using 0.5mm iwata revolution airbrush. I have used black, gray and white and all are excellent. In fact I tend to use the white instead of normal white paint when needed. I also have a bottle of their mahogany 1000 to try as a base coat on my next set of tracks.

Ive got a bottle of Ammo One Shot which is the same as Stynelrez. When I first got it it sprayed beautifully but then it just stopped behaving. Similar issues to what you’re having.

I’ve switched to Mr. Surfacer 1500 Black for my airbrush or 1000 Grey in a rattle can. The Black I cut with either Mr. Leveling thinner or just lacquer thinner in an arbitrary ratio until I’m happy with it.

I do use the One Shot/Stynelrez for figure painting or fiddly bits that go on post airbrush because the stuff brushes beautifully and dries quick.

You really need to use the Mr. Surfacer 1500 Black thinned 50/50 with Mr. Color Levelling Thinner and shot at 15 PSI with a .5mm nozzle. There. I think I covered all the bases. Being a lacquer, it adheres equally excellently to styrene, photo etch, and resin. It sands beautifully. It goes on thin and dries to a tight skin that looks pristine. You will have great success and perfect results. You can then shoot any paint you like over it.

Thanks for tall the replies everyone. Think I am going to go with the Mr Surfacer 1500 in black!

Little late to the party, but when I do use a primer I use one that reduces with a cellulose thinner. I want it to “bite” into the plastic and “cut” through any surface contamination that might be present. I’m just not confident that any water-based paint has those qualities (which for me are the main purposes or reasons for priming).

I usually spray one of my remaining Floquil Model RR colors or a Tamiya paint that’s been reduced with lacquer thinner. I have also ,upon occasion, sprayed My. Surfacer thinned with Mr. Color Leveling Thinner. (Although I generally use Mr. Surfacer as light duty filler applied by brush.)

Anyone sprayed mr surfacer with Tamiya lacquer thinner? The store I went too was out of the MLT