Just getting back into Modeling after 33 years. Built tamiya M2 back when it came out. I was in the second Battalion(C Co, 2nd Bn, 41 Inf, 2nd AD) that fielded the Bradley. I am trying to find photo etched parts for it but have hit a wall. Would appreciate any help I can get.

Welcome aboard. Always good to have another Bradley crewman and builder here.

As to PE, Eduard made three sets for the original M2: Interior, Exterior, and Turret Interior. They also made a smaller set for the M3 Exterior. Unfortunately, I don’t think they are available any longer. You may be able to use most of the pieces from a later M2A2, M2A3, or M3A3 set; at least the basic hull pieces for tools, screens, etc.

Aber does a set with a metal main barrel and coax, and another with metal barrels for the port guns. They are both very nice.

These posts may help too.

Thank you for your post. It is much appreciated. Noticed the M2 Bradley REFORGER . Was on REFORGER in 1984 becoming the one of the first units to pick-up our vehicles from the POMCUS Sights. Was up against the Army Of The Rhein, the Brits.

Aside from a stowage set, Legend Productions offers a few different sets if you’re set on tweaking the older Tamiya kits.
The detail set is really nice if you want to show the lockers (and replaces the A/C units on one of the Meng kits) and the wheels will work on any of the older kits. 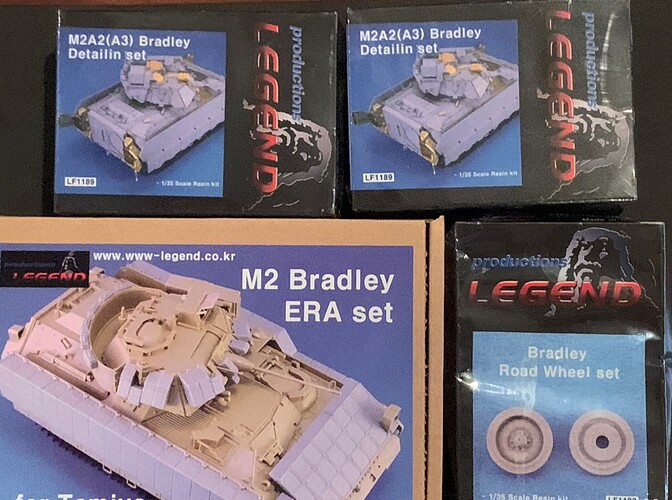 They’re still around too.

Thank you for the info. Definitely early model M2. Got them in 1983 at Fort Hood, while with the 2nd AD.