Just curious as to what old fashioned paper magazines do folks like to read. Military, modelling type. Not the Bunny type.

I’ve just purchased my first couple of copies of Dioramag. Nice mag but $$$$$$. I like the paper stuff. Online or table ones are ok but I like to flip back and forward between pages. And the batteries never run out with the paper mags.

So what am I missing? What are the good paper mags about military modelling and/or dioramas?

Used to be Fine Scale Modeler. Switched to Military Miniatures in Review. That one ceased publication. I haven’t found a replacement since then.,

Abrams Squad is the only magazine I’ve liked enough to buy a few issues of in many years.

I used to like MMiR as well but tuned out to MMiR very quickly as publishing became inconsistent by issue #18 or so. When they had the “scoop” on new kits they rocked but when the kits beat the magazine into the store lost interest.

In hindsight not really a magazine fan.

I get Fine Scale Modeler, only US based magazine left. I used to like the old Military Modeler/Scale Modeler, but that closed down in the 90s. I will buy a European mag if there is a good article that interests me. I used to get them at my LHS, but for the past year or two they haven’t been available (go figure). Unfortunately, those mags are costly, so I only get one that interests me, no subscriptions.
Ken

Yes I was a huge fan of Mmir until they ceased production but yes it was frustrating at times. Still have a bunch of military modeling with some great build articles that I still consider great references. Military illustrated modeler, military model craft international, military in scale, some old Verlinden, and bore sight are some of the mags I still have. Also AFV modeler and armor model from Spain. Some of them I can’t part with lol

I can certainly recommend ‘Military Modelcraft International’ (published here in the UK by Guideline Publications. The content is both varied and well presented. At £4.95 per issue, I consider it to be the best value for money among the military modelling magazines currently on sale.

I have all the AFV modellers, Abrams Squad and Steelmasters (french texts) issues and i likes magazines far more than internet pics.
I buy too some other magazines issues when articles are interresting for me (post WW2 conflits, WW1 subjets and hélicopters or modern planes).
I have 20/30 magazines in stock that are waiting To be read.
I have a huge collection of magazines, references books and 300 kits…

None,just about everything I need is on the forums, blogs,build logs, on line reviews, and YouTube.
So I save my money

There are plenty out there if your interest is seeing others paint and weather using a particular brand’s products. That’s not my interest, so I can’t give any recommendations.

I guess it’s sad that we have all turned to the internet for our reading. I like to camp in remote areas without the net. So a stack of paper kept me happy. I load some onto a tablet but then the battery dies at the exciting part!

I usually snap up all the Tamiya Model International magazines when they arrive in the store, I like that they cover all sorts of models. I also buy entire years worth of issues from Wheels and Wings of Finescale Modeller, you can get 12 issues for $14.

yeah, me too. I like books and hardcopy publications.

I purchased subscriptions/membership to Fine Scale Modeler, IPMS Journal, AMPS Boresight, and Model Cars Magazine (not military modeling, I know), for the local county library system. This way I don’t get stacks at the house but I can cruise on down to the local branch and read them.
edit added: AMPS Boresight

I’m a big fan of David Parker’s work with AFV modeler as well as Military Modelcraft International but only pick up the issues that have something that interests me, subscriptions are way too pricey . I was a FSM subscriber for many years but gave up when their advertised cover articles became 2 pages of photos & a quarter of text. Also an AMPS & IPMS member so I get their magazines.

Yes paper mags. are good. I don’t read on the computer only these sites.

In the mid-1990’s, the Magazine where I worked moved its office to a new location. As a cost saving’s measure the storage unit needed to be emptied. … Storage unit? — didn’t know we had one.

Subsequently, our entire staff went to the unit and formed a “bucket brigade” to pass old issues of magazines to a large green recycling dumpster parked outside. At the end of our mission, the dumpster was overflowing with magazines… Sad day, as vintage issues passed through my hands only to be destroyed.

Fast-Forward 2015: My long-time landlord decided the time to sell his house had finally come. The realization of moving my operations was rapidly approaching. As a downsizing measure, I decided my personal magazine collection was not to make that journey. … Moving day -3, 7:00 a.m., my collection sat at curbside. Once again, I watched as the recycling truck pulled away with stacks of magazines.

Fast-Forward 2021: Long retired from the publishing industry. I miss the excitement of laying-out the magazine, printing deadlines, and the feeling of seeing our creation in actual form — paper printed and bound in hand.

Safe to say, I’ve since stopped buying and collecting magazines. And with my vision issues, I find it difficult to read large blocks of text on paper anyway. Nowadays, I have Siri “speak text” to me. … Funny, you guys all sound the same!… Siri Voice No. 4.

Funny, you guys all sound the same!… Siri Voice No. 4.

no, that’s actually my voice.

Speaking of magazine memories…anyone remember Military Modeler from the 1970’s to 1990’s? 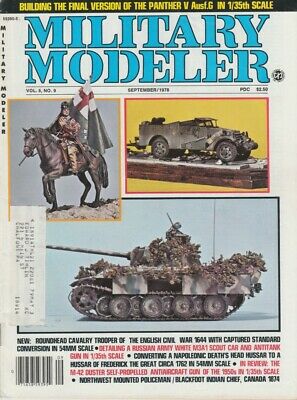 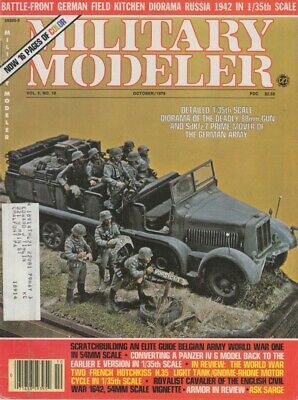 Most issues were quality bird cage liner at best but back in the day it was Ray of Sunshine if you lived out in the sticks.

Yes. Had a subscription in the 80’s. I kept a few issues of the 'Vietnam: Combat Convoy" series builds.