I originally started the “Looking for ideas for what to 3D print” thread back more than 4 years ago on the old Armorama forums and it reached a pretty good size with over 1350 replies and over 430,000 views. I’d like to restart it here on the new forums because I’m getting back into 3D designing after an overly extended hiatus. I had burned myself out with trying to do my own printing, designing, school, work, and starting a new (also expensive) hobby of photography. For the most part, I’ve stopped doing my own printing to sell but it’s still available if needed for things like replacements.

This is my Shapeway’s shop: Mike's MS Productions by MikeyBugs95 - Shapeways Shops if you’d like to take a look. I try not to repost my shop link or links to the products very often but will do so occasionally.

My most recent work has been an L129A1 sharpshooters rifle which will be going live on Shapeways in a little bit - I just need to work on the description. It’s a set of 2 rifles, one with an extended foregrip and one with a folded foregrip. It includes 2 bipods - one extended, one folded, and 10 P-Mags (5 full, 5 empty). After this, I’ll be working on making a SSW version of the L129A1 which includes a scope and suppressor, and an AN/PVS-27 MUNS night sight. 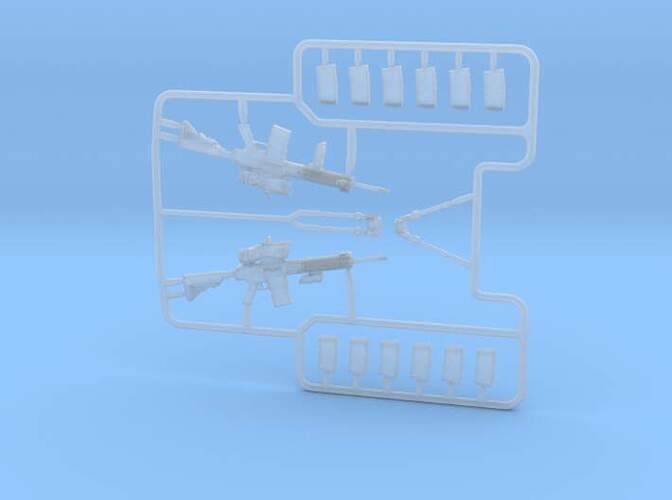 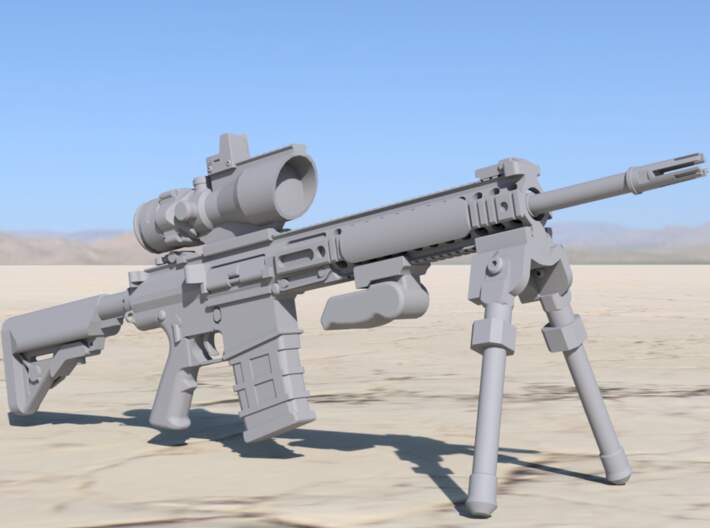 it’s to bad you’re in the USA, I’m looking to get something large printed but I think the printing and shipping costs would be very high.

All I actually do is the design. I have a virtual shop on Shapesways and they do the printing and shipping. They have an office in Europe, I think the Netherlands but I’m probably wrong on the exact location.

thanks for the info

Good to see you made your way to the new forums. Some really good designs in your shop and I’m looking forward to seeing your next projects.

Thanks Maki. I’ve actually been lurking on the new forums for a few weeks but, since I no longer actually build, I never posted.

I recently updated my SINCGARS and AN/VRC-111 sets to a sprued design instead of the previous 2 piece chunky wafer looking design. Hopefully this makes it easier to remove the parts. Unfortunately it makes the SINCGARS set slightly more expensive but the VRC-111 set doesn’t have much of a change. The extra SINCGARS radios, the RT-1523s, have been removed from the VRC-111. Next up for the update is the VRC-110. 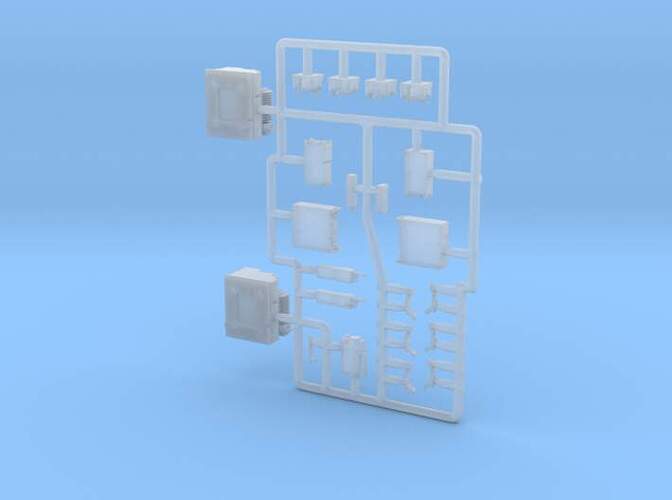 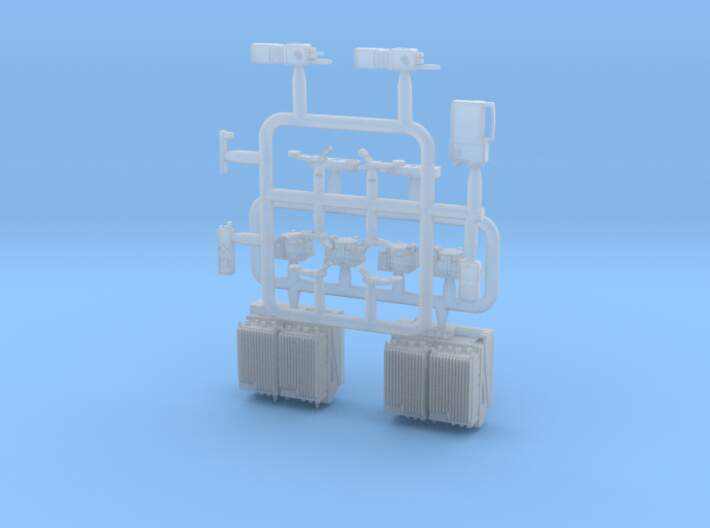 Good to see you back MikeyBugs! I’ll be looking in on Shapeways. 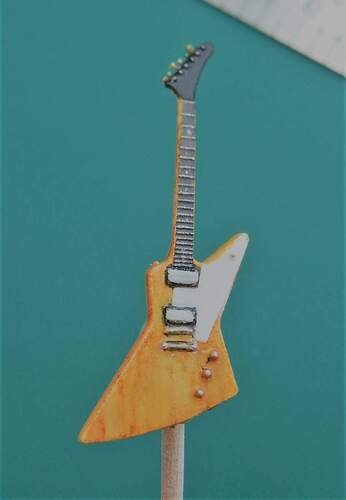 Thanks, amoz! Great job with the guitar! Add on some strings and you could probably jam out.

Thank you Mike. Your 1/35 scale guitar on Shapeways is so detailed that it was easy to paint up. Looking forward to more of your good efforts! Fun stuff

And here’s the L129A1 SSW (sniper support weapon)! Differences from the previous L129A1 is the Schmidt & Bender 3x12-50 scope instead of the TA645 ACOG and a suppressor. 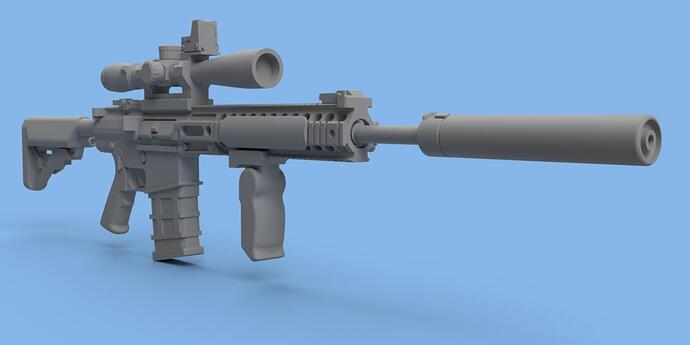 Some progress on the AN/PVS-27 MUNS. Looking forward at a sketch. 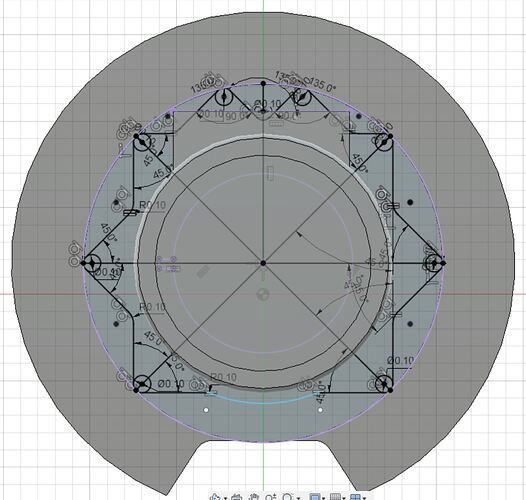 Right now this is the whole thing: 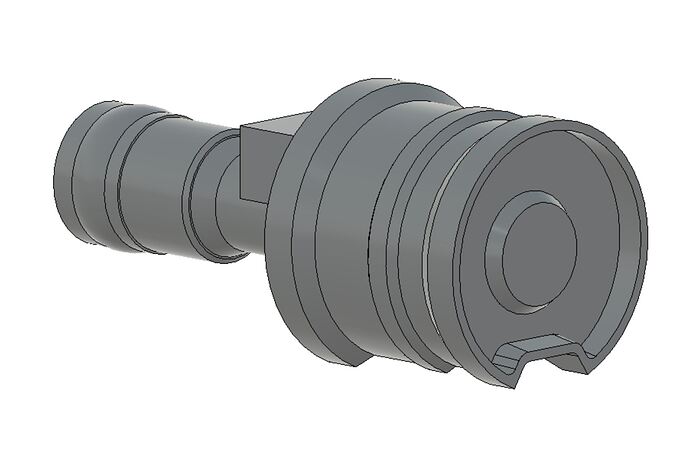 No new product updates as of yet. I’ve updated the M110A1 and AN/VIC-3 Rovis sets to a sprued configuration. Will also update the AN/VIC-1, AN/VIC-12, and the AN/VIC-5 TacG2 sets to this configuration as time goes on.

The MUNS is finished! Here it is on a M110 SASS. I’m planning on putting out sets with the MUNS attached to the rifles and a set with separate MUNS. These parts are pretty small and I have a hard time finding sprue attachment points that don’t destroy detail, make for secure attaching points and also making for easy removal. 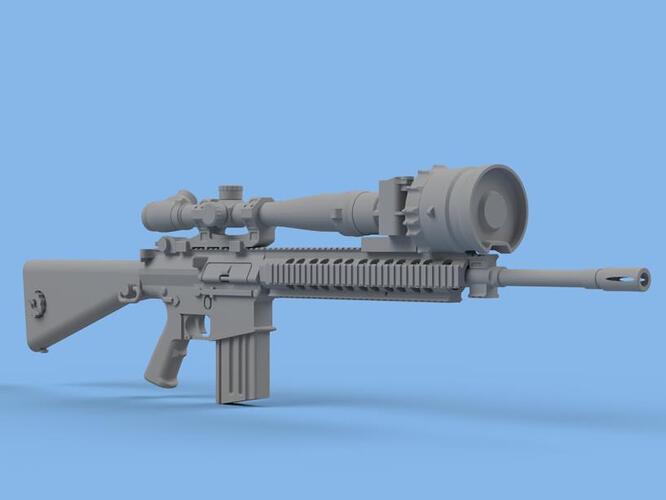 Order in. Thank you Mike!

Not a problem! Thank you!

Hi Mike. I assume you saw this from Shapeways and a fix is in work? Looking forward to seeing this and more of your offerings. All your work in the past has been wonderful! Many thanks

The model “1/35 M110 SASS with AN/PVS-27” you ordered was put on hold by production because of design issues. We have contacted the designer so they can decide on what action to take for this model.

If the designer is unable to update this model within 7 calendar days, this model will be removed from your order and you will be issued a refund.

Yeah I saw it. Their complaint is that the sprues are too small. Even though they’ve printed these sprues before…

The M110 PVS model has been updated. Hopefully it will go through now.

Thank you Mike! Just got this from Shapeways
Hi Stuart,
The model “1/35 M110 SASS with AN/PVS-27” that you ordered on the marketplace has been successfully updated by the creator and is now back in our review process!
Best,
Shapeways Team

Will update as we learn more my friend