Thanks for the advice on the wheels, good to now for the next build.
About the Rucks I now, but it isn’t the first to get lost after a tactical move.

For the trumpeter kits, I have two they are not of the same quality as AFV but with some dedication I think for a starting builder good enough to start with. The MGS is from AFV and some of the parts are for my opinion just to far split up, 4 pieces for a part of 2mm is ferry small. I now some builders want it even smaller and more detailed, for me its difficult to handle.
But thanks for the advice, hope to learn al lot from you.

I never saw a green water can in 24 years of active duty service. I have seen pics of them so I assume there could be the odd one or two still out there though. As to the tan fuel cans, different batches/manufacturers use different shades of the sandy brown plastic. I have seen some lighter than others, but they were darker than the sand water cans.

I would like to see some aftermarket company kit up the big AC unit that the current MGS Stryker has on the front right side - it’s SO visible and outside my very limited scratch skills.

Like the unit in this photo from 18bravo Rob Skipper? 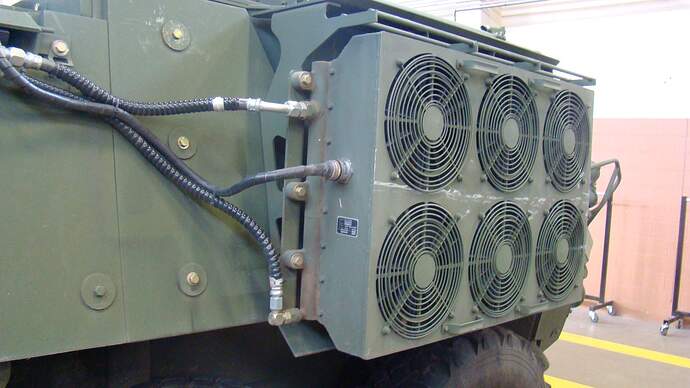 Yes, that’s the exact one. And I’ll give an unsolicited plug for 18Bravo’s Stryker walkaround - it’s truly spectacular!

A Possibility for Michael Goldberg perhaps?

I originally started the “Looking for ideas for what to 3D print” thread back more than 4 years ago on the old Armorama forums and it reached a pretty good size with over 1350 replies and over 430,000 views. I’d like to restart it here on the new forums because I’m getting back into 3D designing after an overly extended hiatus. I had burned myself out with trying to do my own printing, designing, school, work, and starting a new (also expensive) hobby of photography. For the most part, I’ve stop…

I appreciate all of your positive comments about the walkaround. It just got better. I revisited the facility at JBLM today, and got some great shots of the new DVH-A1, met a guy who builds armor and hopefully talked him into joining Armorama. Former 1st Group guy who actually knew a guy I graduated the Q Course with in '83. But the best part - I took measurements of that unit again as I lost the original ones I took years ago. I’ll do another one when I get home with the intent of making a mold this time. 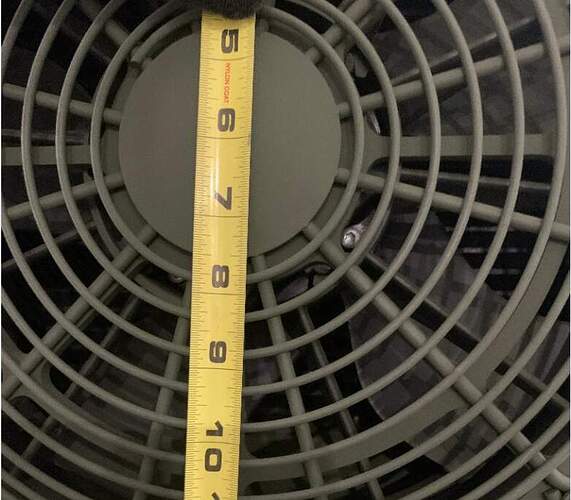 For myself and all your other dedicated walkaround followers, how do we go about getting the update to the walkaround when it’s complete?

working on some details, painted the Rucks, fitting
changed the colour of the water cans 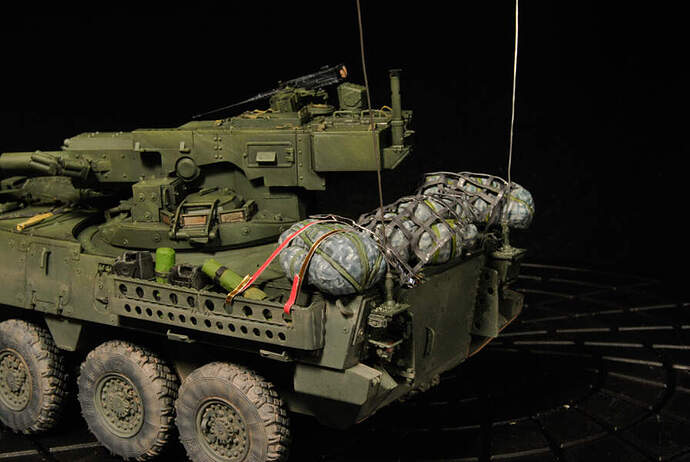 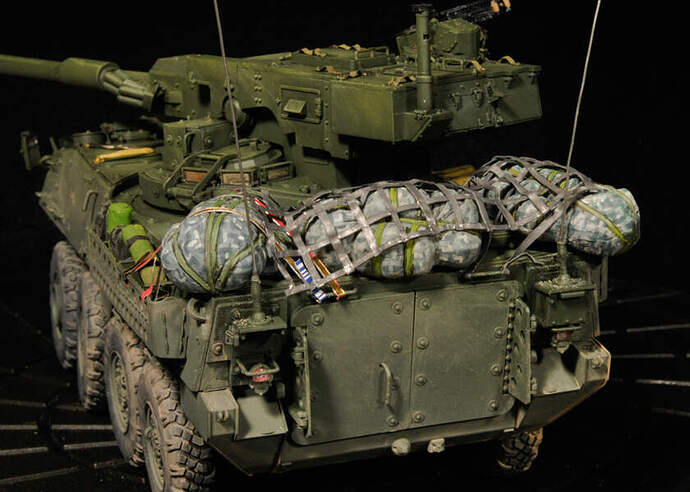 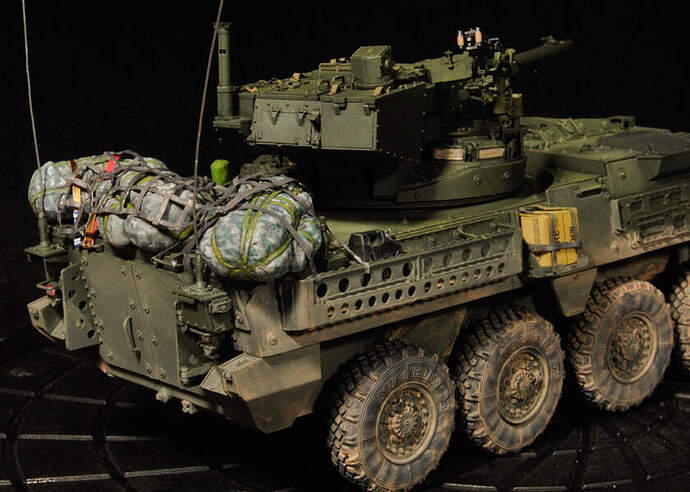 Nicely done all around.

Here starts my contribution to this campaign.
For my Stryker model I have taken a cue for this picture, showing a Stryker used in northern Syria in 2017. 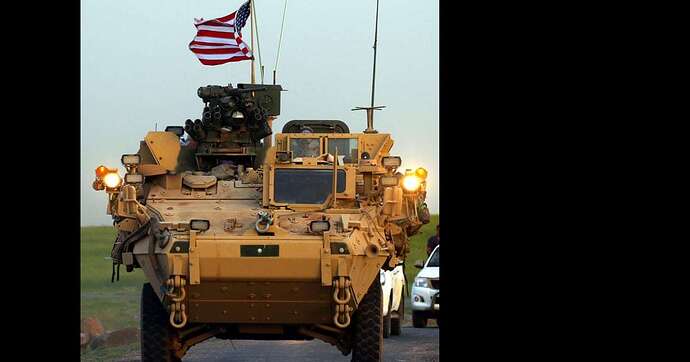 As a base for my model I have used is the M1130 by AFV Club.
I have also used add-ons by Blast Models, Eduard and Real Model.

But, to get close to my reference model, I have 3D designed many new parts.

In the next post I’m going to share some pictures of where my work is as of today.

I will write other posts to describe where I have used parts not coming from the AFV Club kit. 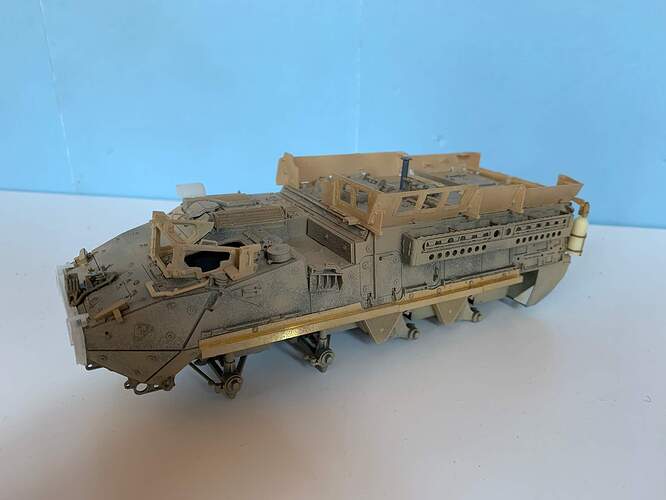 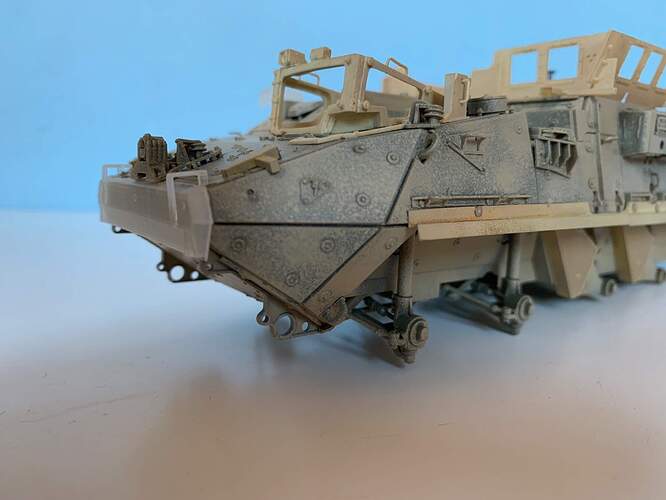 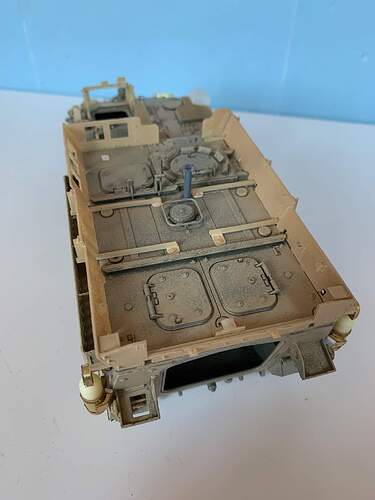 The model will be painted in desert sand (like the reference model), now it has only been lightly sprayed once with primer.

Thanks for your efforts Ettore!

participate on the campaign maybe will help to get this one ready.
Stryker Mortar, firing at GTA range.
almost done just need that last little thing. 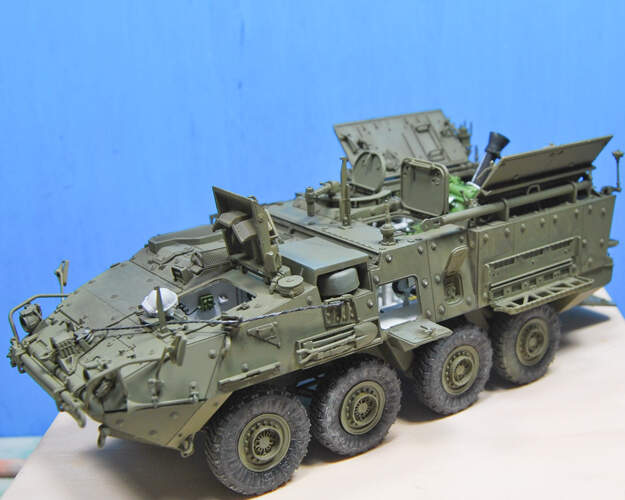 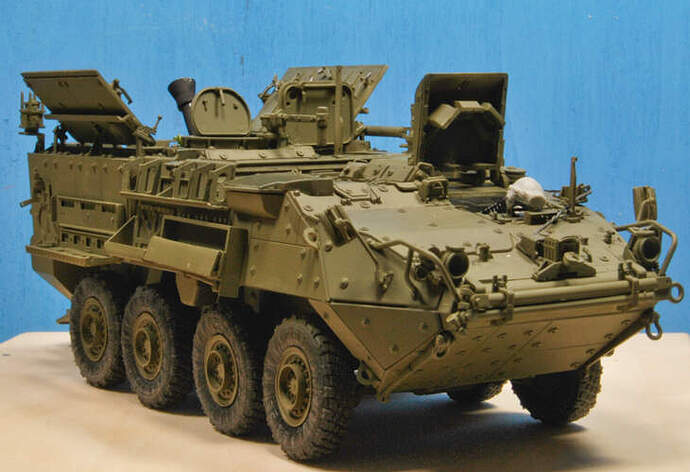 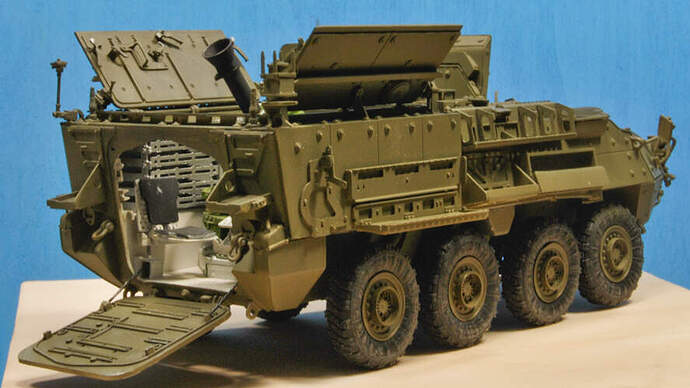 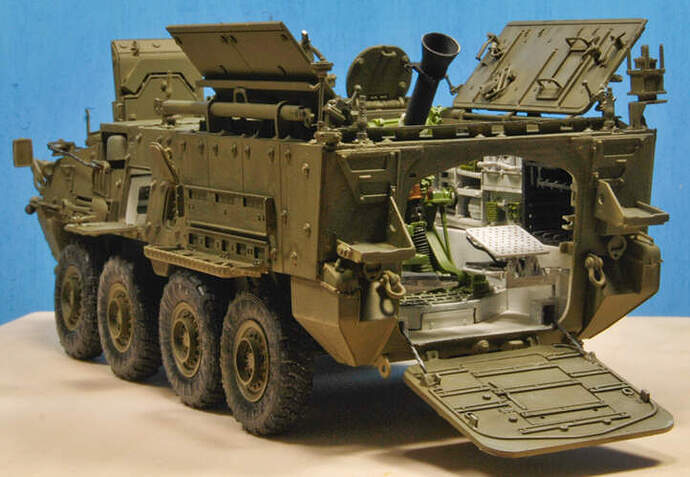 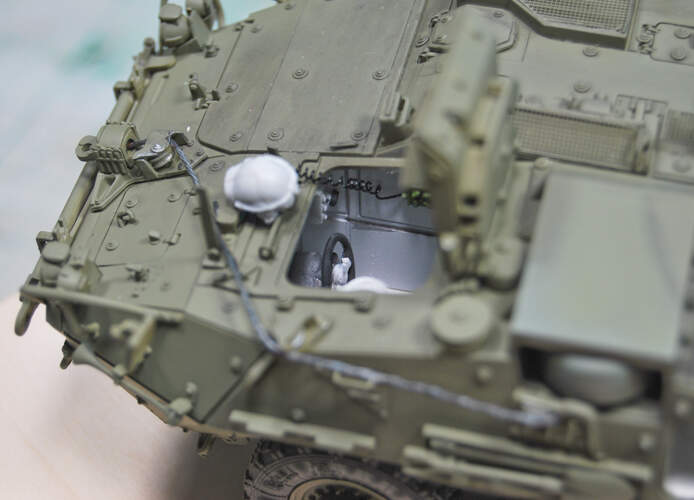 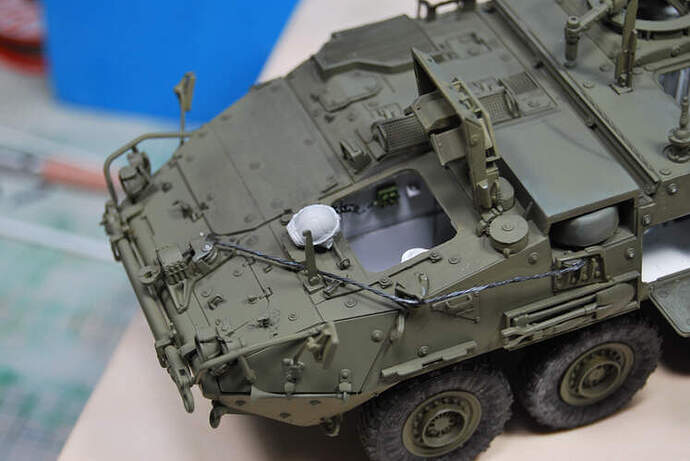 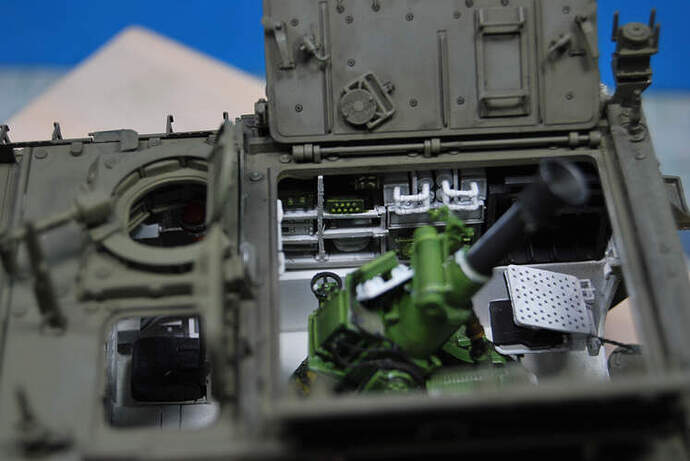 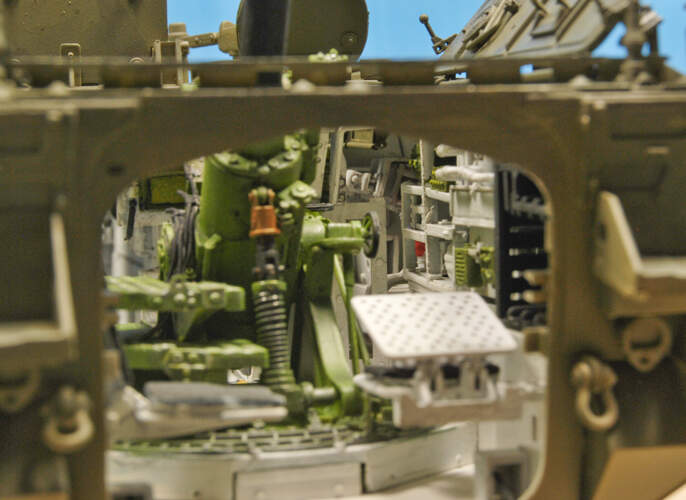 Lovely detailed build Jan and great finish to it… which kit is it ? 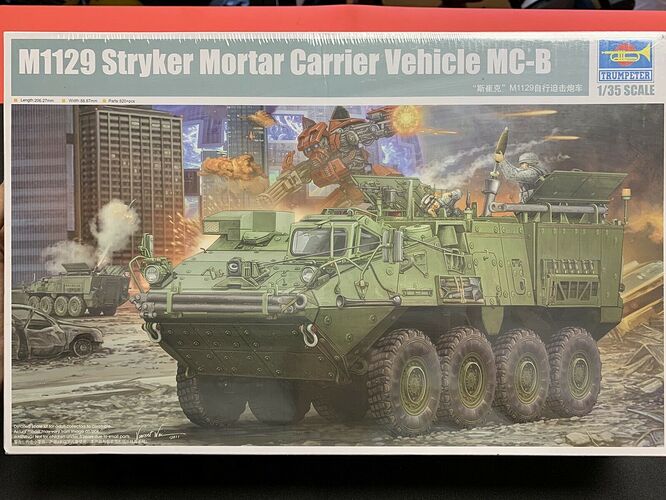 I need to get me one of these while I can…Anyone know the kit number for the giant robot?

Excellent Job on the Carrier nonetheless.

Thanks, still have to finish it.
participate will help

It’s a weird box art for a normal AFV…