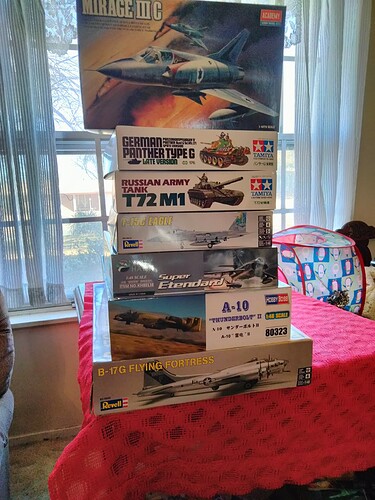 Ahh,
the innocence …
We all started with a small stash
it was small and cute and
then it grew,
and grew
and GREW even more
and continued GROWING
until it became a monster
slowly but inexorably
forcing us out of our
living quarters,
making the rest of the
family huddle together
in a single room,
shivering with fear …

LOL. Well said. Fortunately mine has not YET grown out of control even though I still have a few more on my list to buy / order. But at the moment 7 still waiting to be built 3 in the process of being finished.

I’m sure this has been on here before, but timely perhaps… 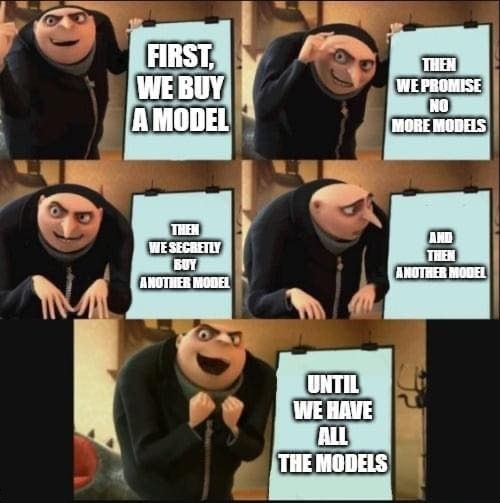 Wait until you find a vehicle or airplane or ship that you really really like and become obsessed with that particular whatever.

I occasionally swat my monster with a broom like the small fly that he is. I am the boss around here. … At least that’s the way I see it.

… Yeah, whatever you say.

Vignette of modeler’s confrontation with the stash monster… 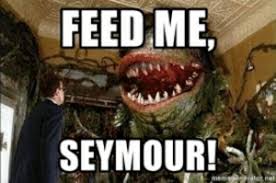 In my case I have to say that it’s a 35 scale RFM Canadian Leopard 2A6M that’s supposed to be coming from Poland (of all places.) some time in the near future. But I think that to some degree I, we get obsessed over all the kits

I can vouch for this. It’s the P-51 in my case. Now I’m sourcing kits and aftermarket to build every major Mustang generation from the prototype to the Cavalier turboprops.

Good stash. It can be good to keep it smaller and buy when you’re ready to build. Interests can change.

Not usually a Euro jet guy, but been seeing a lot of Mirage kits on here recently and it’s got me thinking…

Seriously,congrats,I have never seen the need for a huge stash that will never be built.

Quoted from The Styrene Model Archaeologist Quarterly, History of the Future’s Past…

"In the pre-internet era, a big stash provided a nice buffer to ensure one always had something interesting to build at one’s finger tips due to the vagueness of local availability in the pre-hyper web period.

The “model stash” custom carried forward several decades due to a pandemic that occurred sometime in the 21st century. Eventually becoming a defacto status symbol among the most extraordinarily fanatically of the kit builders."

Yeah I have to admit I like the way the delta wing looks. Especially the Mirage series though I still want to get another FGA-9 Hawker Hunter.

When I realised that kits could go out of production and possibly disappear for ever
I decided to buy what I wanted when it was available.

In case anyone is thinking about buying Bronco kits, good luck tracking those down.
Wingnut Wings aircraft models, beautiful stuff but not my cup of tea, company has ceased to exist
and soon the last kits will be gone as well.

Absolutely, as even with fleabay, alibaba, vendors at shows & friends some kits become either difficult to find or expensive over time.

In another topic Frenchy posted a link to a 1/72 scale UR-77 Meteorit (MICLIC launcher based on 2S1 Gvozdika chassis) for sale at fleabay, 60 USD + postage.
It is out of production …

That’s a good point; even these days - where perhaps the consumer thinks that everything is available for ever, sadly, they’re not. I feel that one has to grab a kit when one sees it as in all probability, it will disappear within quite a short space of time. Of course, thank God for eBay but then you’re subject to severe market forces(!)

I have to agree with you - which is why my stash is somewhat unwieldy. And, pace the above, contains 3 x Takom FV 432s(!)

My stash is small, fewer than 20 kits. I live by two mottos, No plan survives contact with the enemy, and never love anything that can’t love you back.

We need another “show your stash” thread.

Often the smaller ones are the most interesting.