Would anyone be aware of a Panther sporting the same camo-pattern but with alternative turret numbering ? 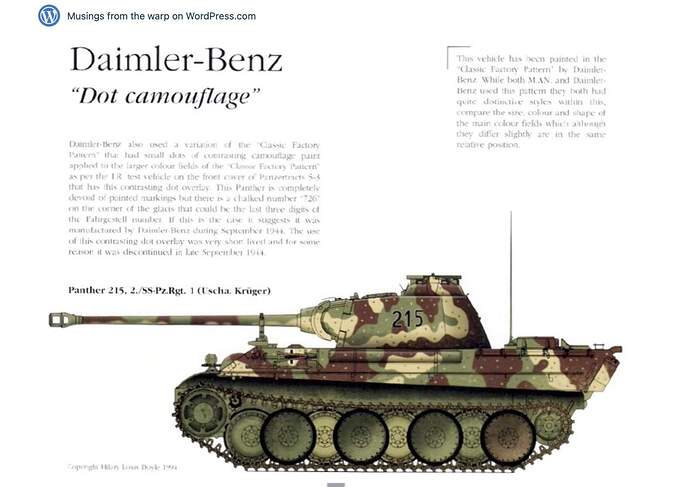 Hello Christopher,
This is the only photo I could find of a Panther sporting the ‘dot’ camo. The photo is from the book “Panther Variants 1942-45” by Doyle & Jentz 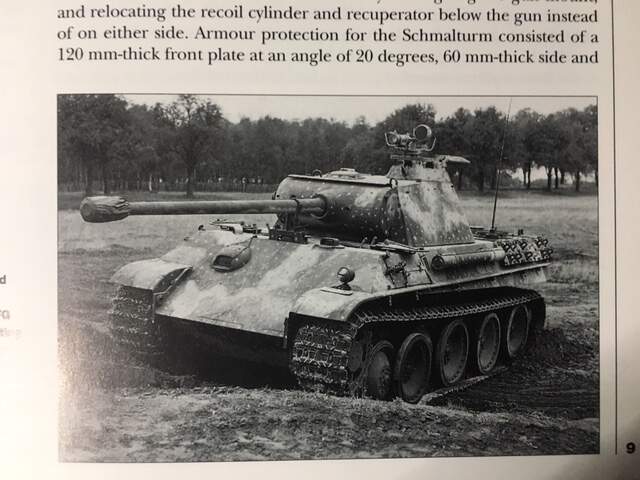 Doesn’t have a turret number but it has the infrared sighting system and spotlight.
I’m not a expert but I don’t think this was a common camouflage pattern on Panthers. I’ve seen it a lot on Jagdpanthers and very late war Panthers such as the one in the photo.
Cheers,
C.

I built a Panther G several years back in markings for Ardennes. While researching photos of Panthers in the campaign, I don’t recall coming across a single one in the “ambush” scheme with the dots applied.

Actually this camo was quite in fashion from September till October 1944 with all major Panther producers. It seems each maker had a distinctive verity of such pattern formats they developed and would apply in this timeframe … which is also reflected in the Tiger II production run during this period (4 different patterns). My thinking is that this pattern used by Daimler-Benz must have been applied to a couple of their tanks … maybe a dozen or so ? … Panther #215 being the most “researched” to my knowledge.
Anyway … I don’t mind reproducing #215 … but if there is proof of an alternative I wouldn’t mind giving that one a try.
This is how far I have gotten … my first WW2 model since approx. 15 years … 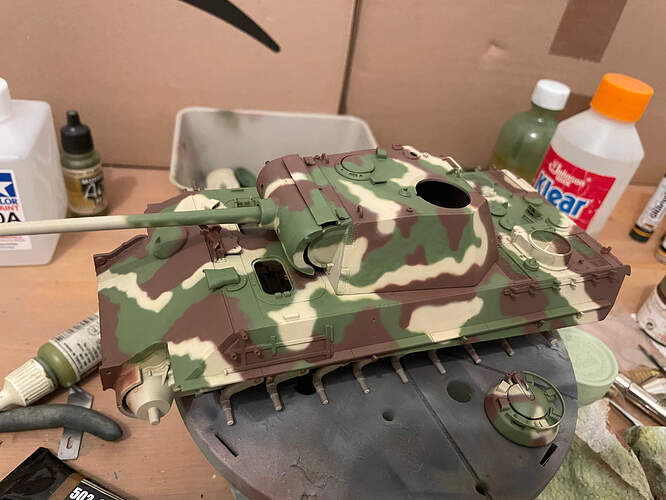 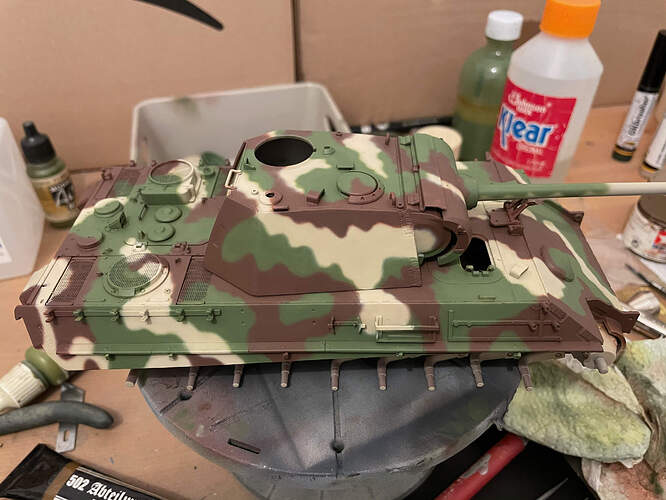 Yes, the three color scheme was factory applied to Panthers at that time. But the addition of the dots to turn it into the “ambush” scheme was not common. If it was in fact used on Panthers at all at that time. That camo type was photographed on other vehicle types during the battle. 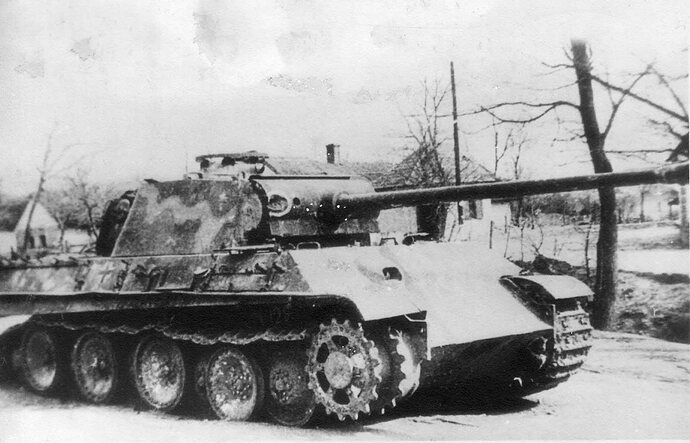 Another… no luck so far with the dots 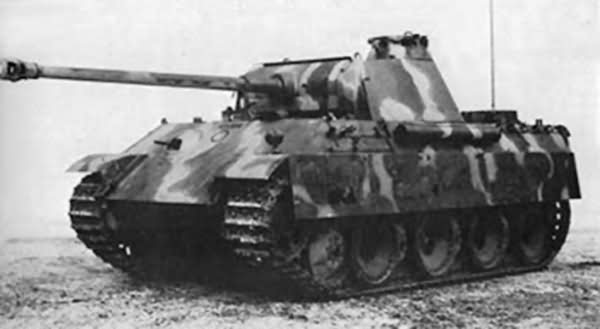 Not impossible to find, but clear photos of the Daimler Benz sprayed-dot ambush scheme are somewhat scarce. Particularly interesting in this photo is the Balkan cross which has been speculated to be one of the black with red outlined (low vis?) crosses like is displayed on the ex-Patton Museum StuG III G (still in original paint and now at the Ft. Benning Armor / Cav Museum). 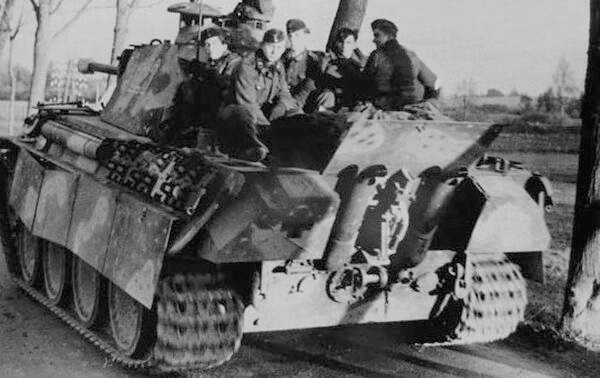 Both of the other Panther manufacturers (MAN and MNH) used variations of the more familiar masked semi-circle ambush schemes. Each manufacturer of tanks had its own slightly different variation of the ambush scheme and not just the Panther factories.

“301” 9th Panzer Div, the box art vehicle for Tamiya’s Late Panther G has the ambush scheme. Not sure if 301 is a DB manufactured Panther, MHN or MAN given we have box art and not an actual Panther picture. 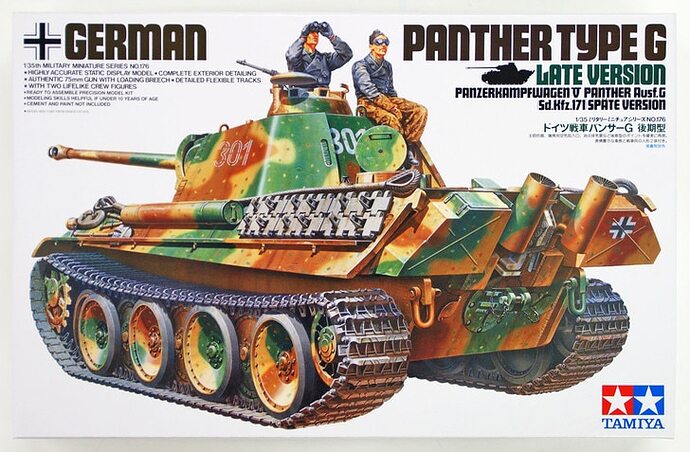 Note that there are also factory specific differences in the placement of the factory applied Balkan crosses on Panther tanks, in addition to the differences in factory camouflage patterns (which also changed over time).