Greetings, Something a little different. I just finished it.

I’ve been enamored with these photos for decades, and finally decided to build it. But it would be too boring to just model a turret on a concrete block. 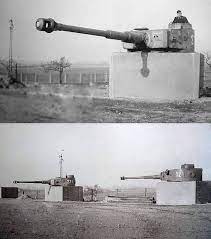 I decided that the only way to really make it work was via another ‘forced-perspective’ attempt. You may recall, I posted pictures of another diorama along those lines, many months ago. 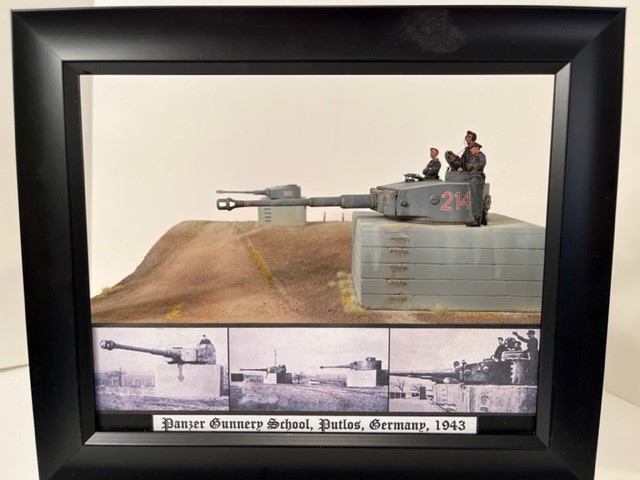 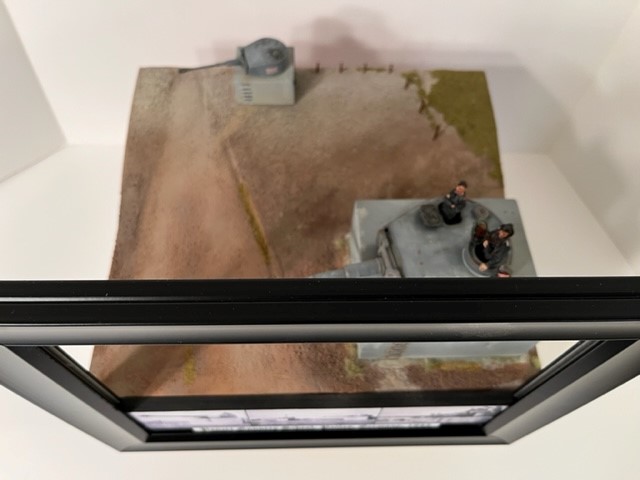 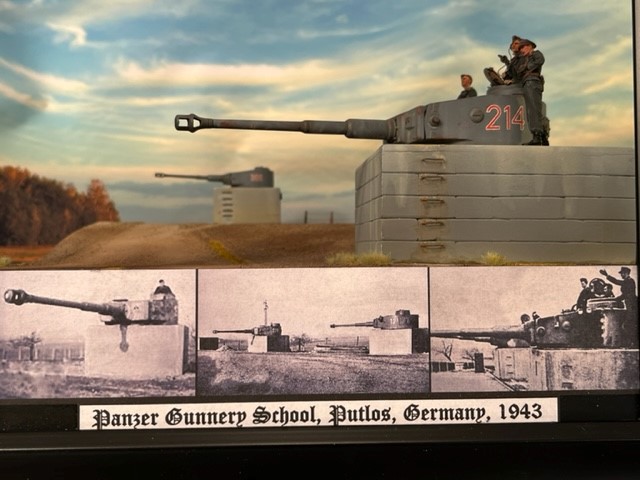 This one was fairly easy, although I felt bad about trashing the hulls from two tigers to pull it off.
Staging it was the challenge. Making it look truly three-dimensional, on one of my standard 30x30cm bases. 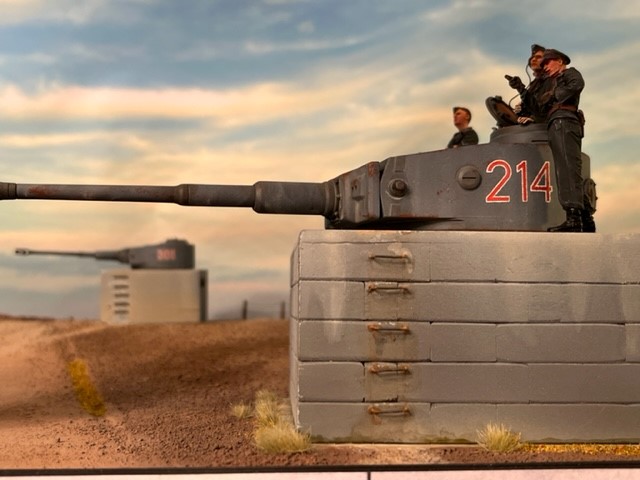 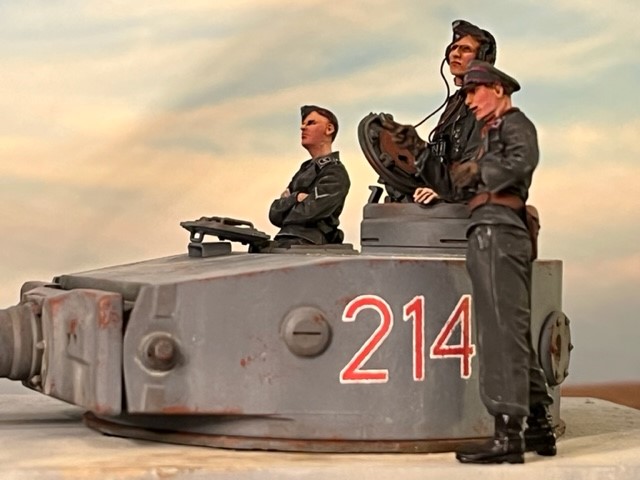 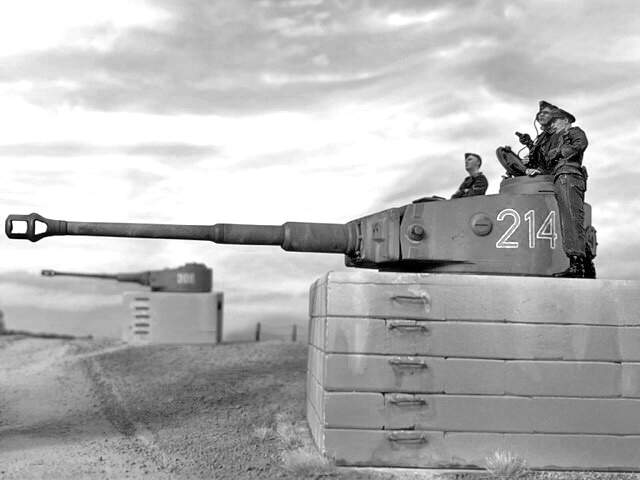 The 1/35 Tiger (early) is from Tamiya, and the 1/72 is form Trumpeter.
Of course, the figures are Alpine, and they match the ones in the photos almost perfectly (close enough for me, anyway.) 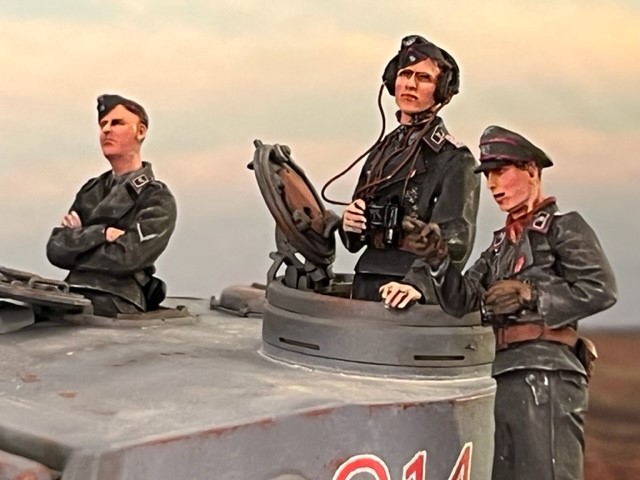 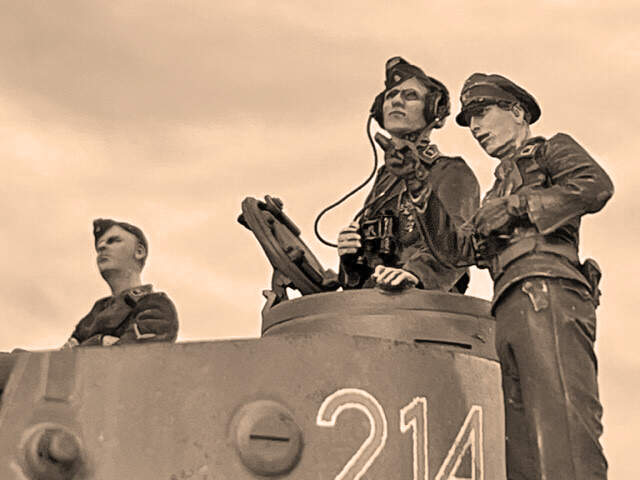 The emplacements are made out of (Lego) building blocks. I’ve found they come in handy for a lot of constructions. Use them upside-down, and just glue a sheet of styrene on top to complete the bunker structure. In this case I gave them a concrete surface using Mr. Surfacer 1500. 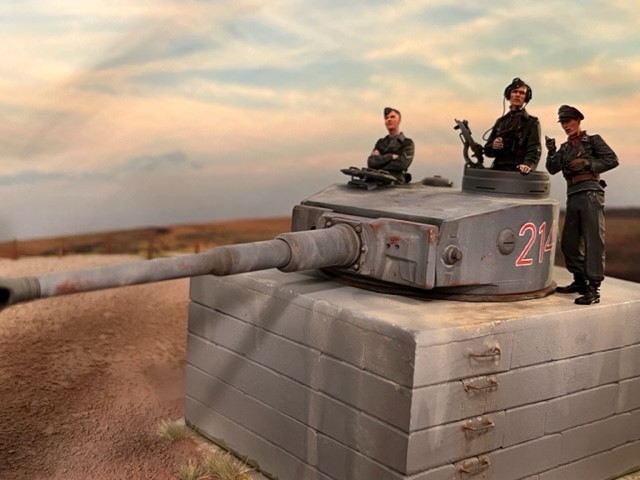 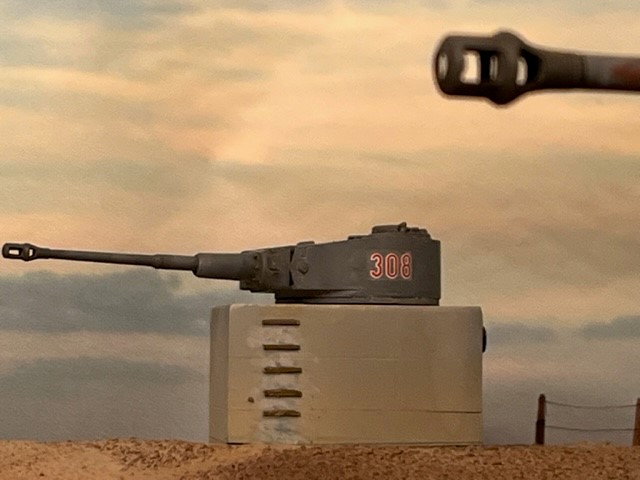 BTW: you can buy bags of hundreds of bricks for a few dollars from AliExpress.

In order to restrict the viewing angle, I used the picture frame and the photos further limit it, and provide documentation for the scene.

With the backdrop I’m really pleased with the photos this project.
What do you folks think?

Wow- you’ve absolutely nailed that- honestly the perspective is judged perfectly and the way you’ve managed to create the effect of distance in that small base and frame is astonishing. The shot where you have the photo from a similar angle just shows you how well you’ve captured it. You’ve also brought the black and white of the photos to life with your version in color- it looks, from one angle you have taken, almost like a colorised version of the original photo!

The commander is wearing headphones?
Did these training turrets have an intercom?
Since there wasn’t an engine running, it seems to me the commander and gunner could simply speak to each other… no?
And there’s no other reason for an intercom in this scenario.

Well David. I’m going to assume that the turret was powered, so it could traverse like the real thing. They used an electric motor for that purpose. A generator inside the blockhouse, or power cables could/would have been included. And therefore there would be power for the an intercom system (quite possibly, also a landline to Range Control.)
And you’d want the practice to be as close as possible to the real thing, where the gunner and the commander would be able to speak to one another. Think about necessary series of fire commands…
It was definitely common practice for the panzer commanders to spend their time with their heads out of the turret, so comms to their driver and gunner would be via the intercom.

When I was the TC in an M113, it was always so loud that I HAD to use the intercom to speak to my driver, and I was also talking and listening on at least two other radio channels at the same time.

That said, in the one photo that shows the crew, the commander is not wearing headphones…

So the work on this is awesome.
Abd to the question of “headphones” my money is on they would be wearing them.

Anybody who’s ever done any kind of gunnery training, inside or outside would know that the intercom is always used.

The Tiger’s turret did not have an electric traverse motor.
It had a hydraulic motor, driven by a mechanical connection to the main drive shaft between engine and forward gearbox.
So we can rule out the existence of power traverse in these turrets - which was not necessary anyway. Gunnery training is about range estimation and bracketing and fine corrections, not swinging the turret about.

It’s true that every shot required the commander to give several commands to the gunner. But even in battle conditions the loader had no intercom connection, so he was shouting his ammunition requests. In the relative quiet of the gunnery range I don’t see a need for an intercom between two men, one of whose legs are literally touching the other.

It’s also worth noting that these retired turrets didn’t come with an intercom. They only had connection points for the two mens’ headsets. All of the electronics were in the hull. So, provision of an intercom here would be an additional cost.

Gunnery training is about range estimation and bracketing and fine corrections, not swinging the turret about.

It depends on what kind of gunnery training it is, because that is certainly not true, at least nowadays.

The highlighted emplacements do look fixed though.

I still maintain, you need to get out more.

By “get out more” do you mean “observe gunnery training in a tank unit” ?

The problem there is, you and I can only observe modern tank units.
These Tiger turrets were used in the 1940s.
And yes, those concrete blocks were not able to move.

I have here a facsimile of a gunnery training manual for the Tiger tank, “Merkblatt 47a / 27” dated January 1944.
It spells out what ammunition to use, how to bracket, how to lead a moving target, and in a final chapter it defines practice exercises that the crew must carry out during a session of gunnery training. It’s the guidebook used by those men in that concrete gun emplacement, although they surely had the 1943 edtion.

The commands that the tank commander must give, are written down. As I said, his commands to the loader don’t go via any intercom, since the loader is never connected to one.
In a Tiger turret, the gunner is nearer to the commander than the loader. If the loader can hear him, so can the gunner. In fact, before 1942, Panzer gunners didn’t have an intercom connection, just a rubber speaking tube.

Nowhere in the book is there any mention of using a power traverse. All of the targets for the exercise are set up directly ahead of the turret. One of the exercises has a moving target, but at a range of 800 meters. The Tiger’s hand traverse mechanism is adequate to lead it.

In summary, I don’t see a justification for installing a Kasten 20 intercom amplifier, and the related wiring.
There may have been a battery in that concrete emplacement, because Panzers had electrical triggers. Or perhaps the emergency backup battery, already built into the turret, was used for training exercises.

By “get out more” do you mean “observe gunnery training in a tank unit” ?

Er…no, but don’t worry about it.

If you intend to insult me - using a coded phrase so that I won’t notice, but other people will - then I suggest you check the Terms of Service.

Good observation on the headphones , I didn’t even think about that .
That being said , for me it doesn’t take away from the build , I still think it’s a very cool bit of a build .

Sorry, I was just counting the number of securing bolts on the gun mantlet, i’ll get back to you.

Ralph that is an outstanding job you did there! A+ for subject matter and the forced perspective looks great. Very convincing to my eyes at least.

The back drop looks excellent as well - is it a photo?

It is and there are plausible reasons why a Commander may be wearing a headset if not even connected to the turret’s intercom (which we’ve established it probably didn’t have).

Although ‘technically’ innacurate, it doesn’t detract from what is a lovely diorama, cleverly executed, and it wont for most people either.

Just a thought and no doubt it will be covered by the manual but might the commander wear the headphones etc so as to get used to the restrictions on movement they might cause in action? Surely that would make the practice closer to the real experience?

That is a cool and very unique build. The forced perspective really works and and brings it all together… Very well done.

These are very reminiscent of our gunnery training turret systems we had. I did try to find an image of one but no success. It was basically a made turret mounted onto a frame in a building and as turret crews we would go in and practice all scenarios of turret gun drills. Our GTSs were exactly as the normal turrets inside and fully powered, Comms etc. The Ch2 ones were a whole different ballgame…

Now, the crew wearing headphones and what they would be practicing and how the training turrets would be set up ? I’m on the fence about the headphones. As best practice you (we) would always practice all drills as per the real environment… So we would be in crewguards and headsets but that was our training and safety requirements…would the Germans of done it that way ? If a crewman on a tiger didn’t have a set for real, he probably wouldn’t have one on the training turrets. Comd ? Maybe for realism if they were so inclined but again if they were in such close proximity with no other outside noise interference he may well not of bothered.

If the real tanks had no electrical power traverse, I very much doubt those training ones would, but I would suggest they had some form of hydraulic system in place to replicate the real tanks as if not, that would give a false sense of training which brings me onto my next point about “throwing the turret around”:

It is as DB said regarding loading, fire orders and how to lead and bracket a target etc, yes they would of been the basics, but the drills also include how slick and fast the crew operate , how they respond to different scenarios, carrying out misfire drills and changing ammunition nature’s and switching targets mid shoot. Those require the crew to be able traverse and find and lay onto targets quickly so practice for those would require very proficient skills in moving the turret… It really isn’t as easy as some people think (I’m sure G at @Maximus8425 will agree)

Edit. And Ralph @Bravo36 the Lego blocks for the bunker … Genius!! They are the perfect solution…and once again, it really is a fantastic build