As a young private soldier during my first posting, I ended up being assigned to the General Staff Branch of G Int & Sy (Intelligence and Security) at the Headquarters of 1st British Corps in Ripon Barracks, Bielefeld, in the Federal Republic of Germany.

The staff disciplines of Intelligence and Security did not just devolve onto the Staff Officers - which I, as a Staff Clerk - was there to support, but also included professional support from 2 dedicated Intelligence Corps sections, one dealing with, obviously intelligence, ie the study and monitoring of the Soviet Forces in East Germany (and other Warsaw Pact nations), and also a section devoted to security – both document and the physical (and counter-intelligence). We were all ensconced in an attic office complex in one of the many 3rd Reich-built barrack blocks that comprised Ripon Barracks. I shared an office with my Chief Clerk, a Sergeant, and we provided the clerical support to a Major and an Intelligence Corps Warrant Officer; the GSO 1 - a Lieutenant Colonel - who commanded the whole, was ensconced elsewhere in the building. We shared the office with the aforementioned Security Section which consisted of 2 Intelligence Corps SNCOs; obviously, as very much the junior, I was kept busy in making the coffee, running errands, in addition to learning the more arcane aspects of my trade.

The HQ was regularly tested by domestic exercises, known as Command Post Exercises (CPX) at least 3 times a year; these were code-named as “Sales” so we endured a Summer Sales, an Autumn Sales, and a Winter Sales; if we were deemed to be lacking we would often be further honed by a Spring Sales. These all took place out of barracks, in the forests, woods and sometimes villages of the FRG.

So it was, in early 1972, that the following conversation took place in my office:

Security Section SNCO to my Chief Clerk: “Harry, we need to do some exercise preparation for Spring Sales, can I borrow young Stodders?”

My Chief Clerk: “What have you got on at the moment Stoddart?”

Me: “Well Chief, loads of filing, then I’ve got to type up and copy the latest Protective Security Survey Report and then distribute it; after that I’ve got to get over to the Armoury and clean everybody’s personal weapons, then get to the NAAFI (military canteen and Services’ shop) to get the Major’s fags and some brew kit, then I’ve got classified waste destruction to do.”

Subsequently I found myself under the supervision of the aforementioned Intelligence Corps SNCO who required help in equipping his Land Rover with suitable camouflage; way back then, such soft-skinned vehicles were required to be fitted out with a Hessian screen (Hessian being the sack-like material used for, well, sacks) to prevent glare from windscreens and to help disguise a vehicle, before itself being covered with a camouflage net; the whole being supported by poles, usually from fir saplings, to help break up the outline. I hasten to add that this was required for all the Soft Skinned Vehicles - and the one Armoured Command vehicle - that composed the Corps HQ in the field ie Land Rovers and trucks alike. For whatever reason the Security Section was bereft of any such equipment so I was told to report to the Quartermasters - no small task as it was the other side of camp - draw up a large, heavy roll of Hessian, some camouflage nets and the appropriate patches to add to the nets, and also a drum of olive-green paint and brush. I also signed out some coveralls from the clothing department, with the usual reluctance from the QM staff who seemed to take every request as a personal slight on their right to do sod-all.

I wasn’t completely left to my own devices as the Sergeant turned up in his Land Rover, and gave me clear instructions as to what was required; this was to stitch together at least 3 widths of Hessian together, or rather the amount that would cover a Land Rover and in fact we worked this out with his vehicle there and then. The Hessian was stitched together in a rather crude fashion by my using a roll of Army issue green string, utilising an Army ballpoint pen as a sort of needle. These sheets then had to be covered in whatever camouflage pattern I could devise, hence the paint. The idea being not to paint solid patches but to break up the outline. The only thinners was a jerrican of petrol taken from the Security Section Land Rover. The measuring and cutting all took place on the edge of the barrack square - being the only area large enough for the task - and I laboured there for around the whole day. Once I’d splattered the paint over the Hessian I had to “make” a camouflage net; this meant laying out what must have been an 18’ by 24’ net onto the square then affixing endless triangular-shaped patches of plastic scrim; this was known as “garnishing”. It seemed to take forever. Gusts of wind didn’t help, nor the ribald comments from my immediate peer group as they loafed by on their way to the NAAFI for their mid-morning break.

Anyway, a long intro into the following vignette “Preparing for Exercise” – the Hessian painting phase. The figure is a converted Tamiya German mechanic; paint can from plastic tubing and wire, brush from scratch, Hornet Head, belt modified and that was about that. The rolls of Hessian came from a military-type adhesive tape which we all knew as “Jungle Tape” but is also apparently known as “Sniper Tape”. It’s a bit over-scale but does give that woven look I needed. Jerrican from Accurate Armour but with coloured type-of-fuel tag added from plastic card. My Army-issue clasp knife is also from scrap (flattened solder and a sliver of lead foil) with a lanyard from fuse-wire. The virgin net is medical gauze (soaked in PVA glue) wrapped around a chunk of Milliput; the boxes are from Yen Models (courtesy of Red Zebra) and the scrim patches (which were actully green one side and brown the other - but I’ve shown both) from used tea-leaves on a thin layer of PVA glue. My combat smock – the older olive-green type – is a modified product from Red Zebra. The Corps formation sign is on both sleeves. We did not receive DPM Combats until later that year.

I used a textured paint to give some contrast for the barrack square, sprayed a light grey colour and then dusted with pigments. 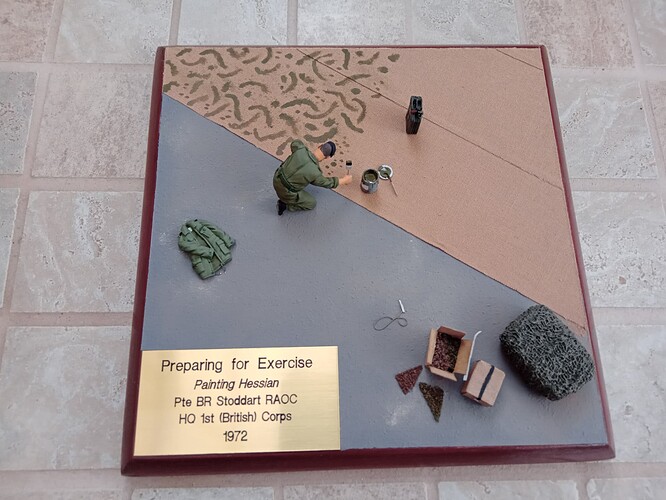 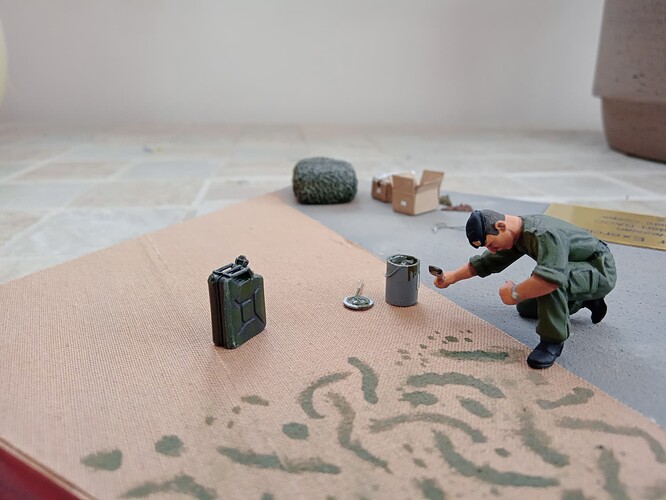 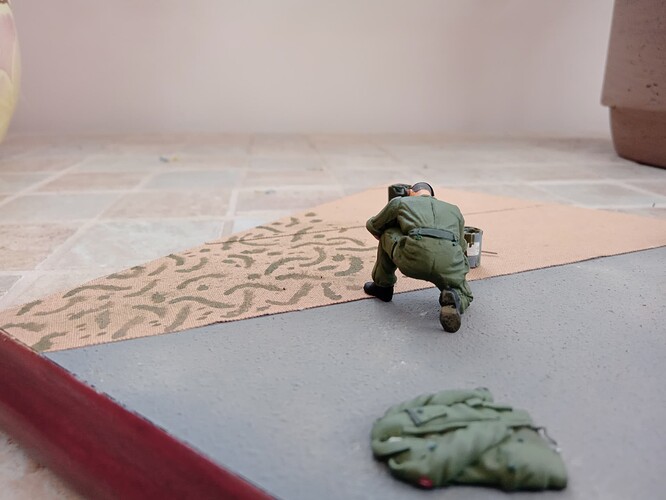 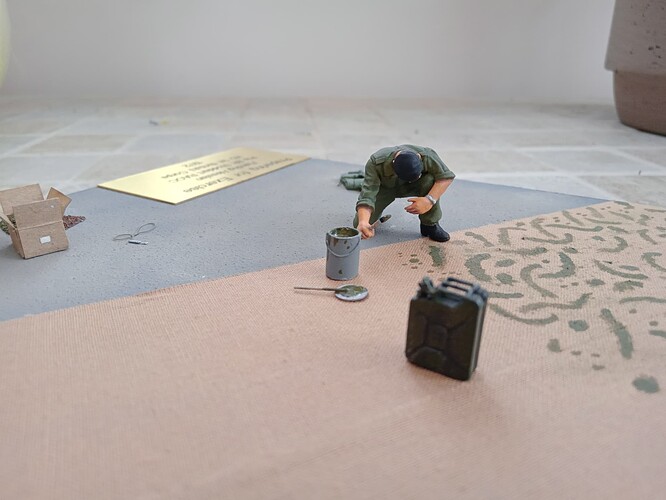 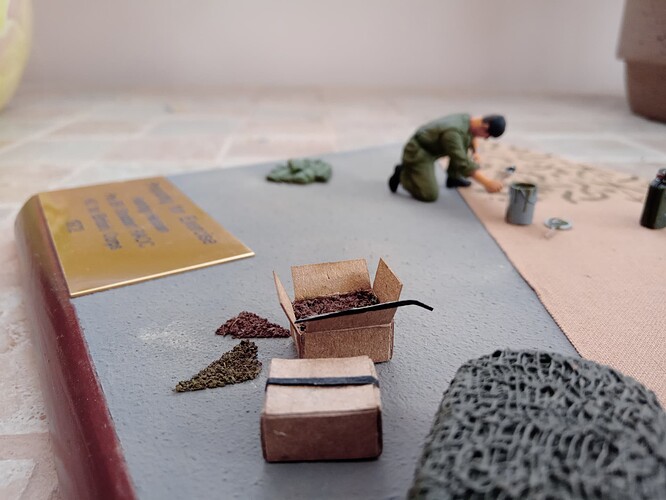 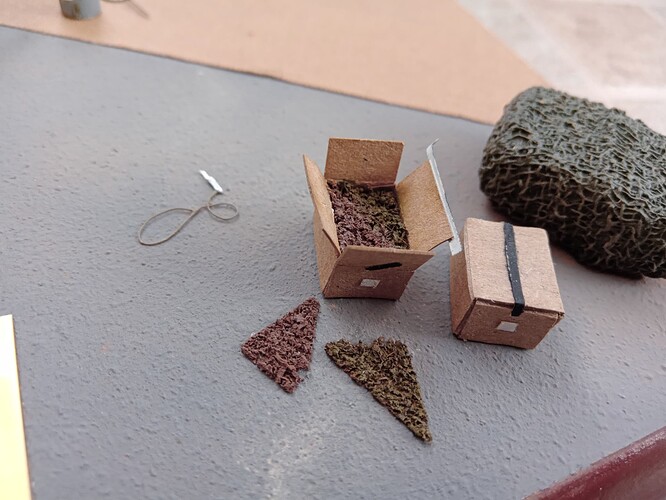 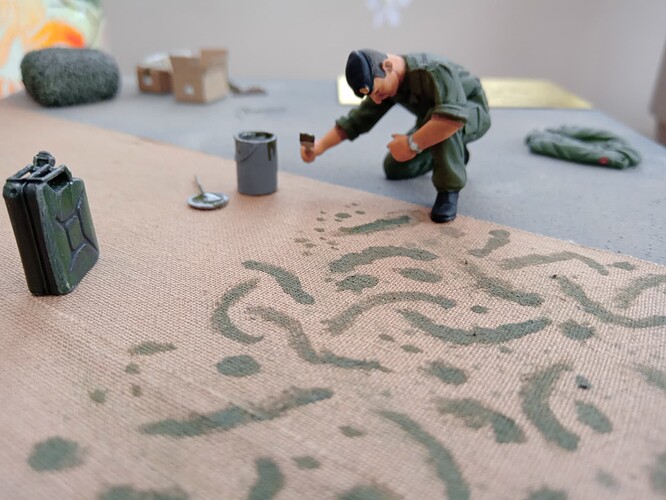 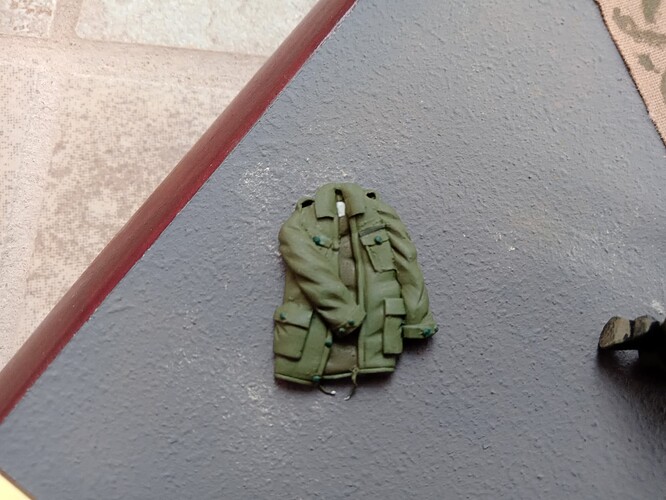 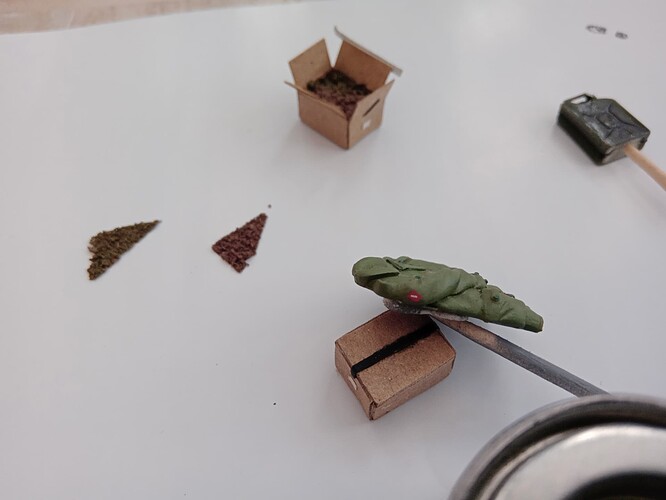 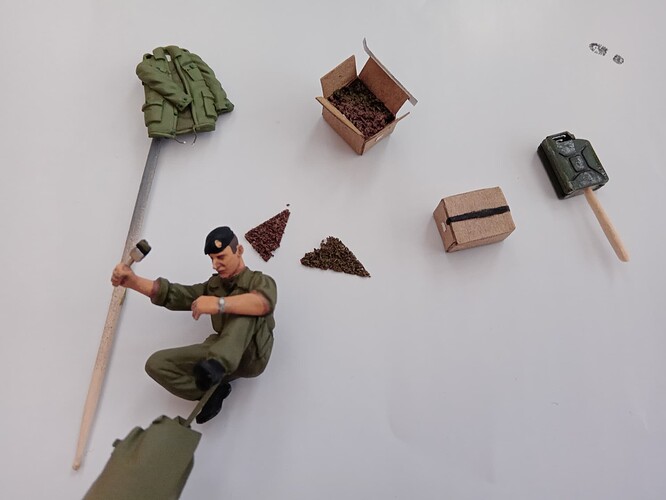 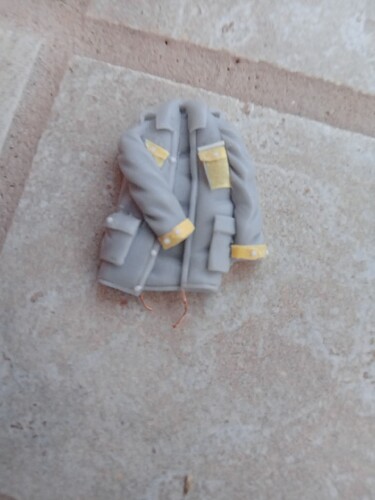 And that folks is that; I’m not sure that this will be to everyone’s liking but if nothing else it reflects a facet of military life not often depicted on the display tables - that of the sheer mundanity of the tasks that come a Private soldier’s way.

My smock – which I still have – and clasp knife and lanyard: 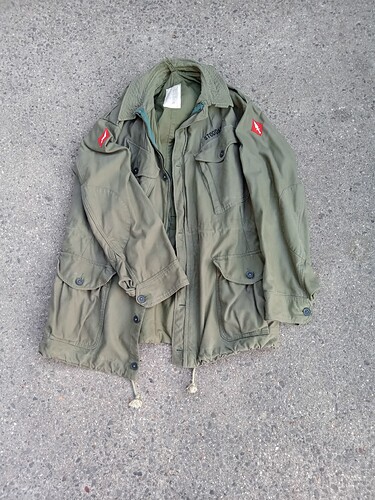 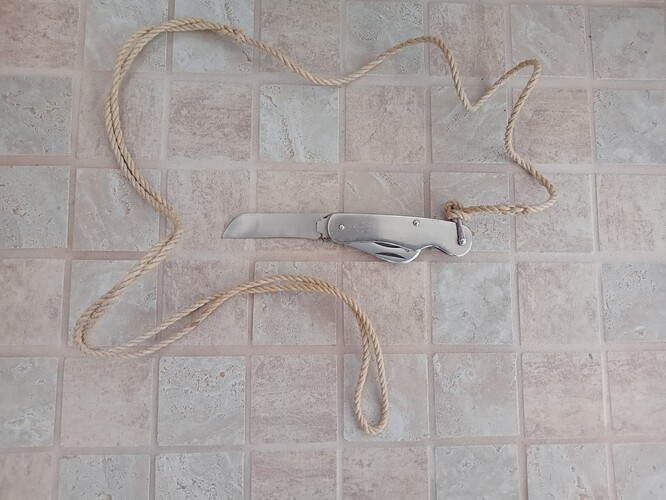 PS: I was subsequently billed for the Coveralls due to my having got paint on them; I slowly began to realise that forging a career in the British Army might be tougher than I’d thought.

I like it, it’s something else but shows exactly a normal workday of a private.
Nice work.

A great little vignette and story to go with it! It’s most certainly not something you’ll see depicted in scale very often but it’s all the better for that I think. It’s an interesting mix of materials and products that you’ve worked with as well.

Nice. Did you really keep your beret on? I can relate…

Ah yes, the joys of being sent out on details. One of many reasons as to why field life was usually preferable to that of being in garrison.
Great work and I do love the back story of the event.

If you don’t know we have a figure campaign that “little” you would qualify for.

Thanks Karl, probably a little underwhelming for most tastes, but I sort of thought I’d try and document/portray something different. I must admit it was a bit of a change from making AFVs (doesn’t reduce the stash though!)

I did; working on the parade square was a high risk venture in any case, given the tendency for the Regimental Sergeant Major of the supporting regiment to prowl around; I really don’t think he liked the HQ population very much at all, which was a bit ironic given that his job was to “support” us all. A not untypical embittered Warrant Officer who, if away from the familiar constraints of his parent unit, just didn’t seem to, well, “get it”.

Ryan, so, should I just repeat this on to the Campaign piece?

You don’t have to repost all the photos, just the in progress shots with uniform, figure and one completed photo. You can also add a link to this thread for the rest of the photos.

Great stuff Brian, and what a great idea - surely the start of a Campaign in its own right depicting oneself in a vignette/diorama with mandatory back-story. Title…Mis-spent youth, I did it my way, endless possibilities

Dunno about that Tim; to paraphrase Edward Fox portraying General Horrocks in A Bridge Too Far, “…and mightily bored you’ll be!”.

Excellent job Brian! Love the figure and all the details you’ve put in your scene. That’s some fine work there.
Great quote from a great movie (despite its flaws) , I think this topic would generate a ton of interest.

Sorry Ryan, just spent nearly 2 hours trying to get to the bottom of the Campaign piece to insert my stuff, but due to God knows what gremlins within my IT, it just didn’t happen!

Very unique, I especially like the smock (Field Jacket?) complete with draw string.

Thanks Richard - your comments are much appreciated. I’m not sure about generating too many of the personal moments genre, especially given my somewhat boring existence(!) as a military Clerk, but I might produce another few. There’s also a danger of it being perceived as a tad egotistical perhaps.

That said, I have started a project reflecting life at Army Group level - which might end up being titled “Unloading the Land Rover” - you can’t get much duller than that!

Thanks Terry - the Red Zebra article was pretty good to start with and didn’t take much to modify. 'Glad you spotted the draw-strings!

I’m not sure about generating too many of the personal moments genre, especially given my somewhat boring existence(!) as a military Clerk, but I might produce another few. There’s also a danger of it being perceived as a tad egotistical perhaps.

Not at all. I like building models of the various vehicles that I drove, crewed, commanded, or rode in… with aircraft that’s a bit harder as I never got their serial numbers.