While the fun continues with our Inaugural Railway Campaign, it it time to plan or this year’s campaign. So many ideas to choose from, none set in stone. What do you think of railroad-oriented structures, civilian or military themes? Any scale/era/.

Just to name a few.

Like the current campaign, we can run it a year. That allows others to come in later, or build a second or third entry.

Thanks for your consideration. RailRoad Modeling looks forward to hearing of your ideas.

I’m in for this. I’ve been thinking about building something to go alongside a track. I have a picture of a lineman’s house from the 1942 campaign in Russia, but I’m not sure it would be distinctively railroady enough. But I will find something! Let’s go! Where do I sign up?

What do you think of railroad-oriented structures, civilian or military themes?

How do you feel about repurposed lineside structures that no longer have a line to be beside? I ask because the particular area I originated from (England, top left hand corner) was covered with a cobweb of minor lines designed to facilitate mineral extraction but many of which ended up providing passenger services. All are gone now but a tremendous amount of the infrastructure remains; there’s a sort of inertia because it costs money to demolish something so things like bridge abutments survive until they are in the way of road-widening schemes and the like (the metal spans were usually recycled as soon as they become defunct), station buildings become private homes, etc.
This gives a taste of what I’m going on about but actually stops just when things are about to get really interesting:
https://www.channel5.com/show/walking-britain-s-lost-railways/season-1/lake-district

P.S. When I say “all are gone now” I meant the standard-gauge stuff, although reduced this also remains:

Join us as we journey from Ravenglass, the only coastal village in the UNESCO World Heritage site, Lake District National Park. Travel across the estuary, through the hills, past seven request stops with a 1:40 gradient at times, en route to our...

Who else is out there and want to have a go at this? 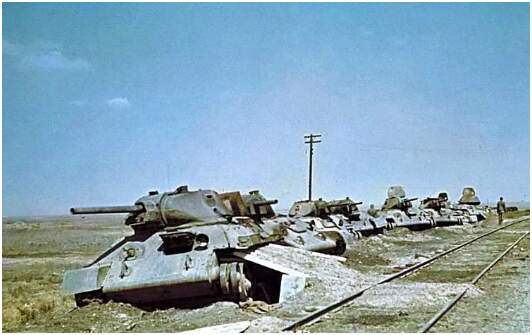 Have you all heard about the Maeklong Outdoor Train Market?

A few videos to look at: 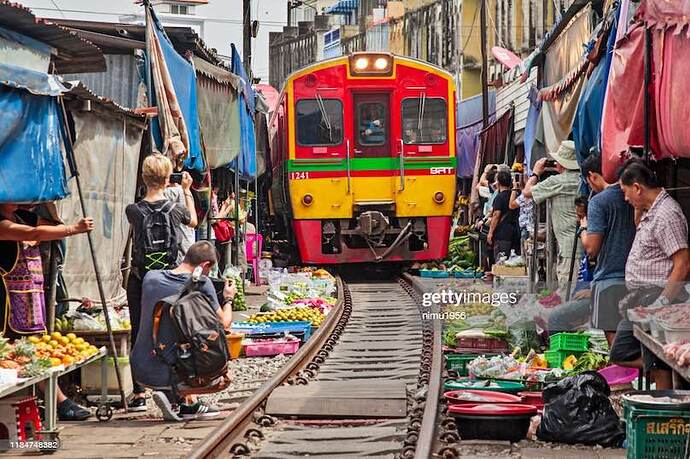 I have (had??? :scr Still looking.eam:) a color photo of a Soviet station on the steppe. Can’t find it!!!

Amazing site. Colorized photos of Russian railroad c.1885. Some ideas of how they built structures back then. 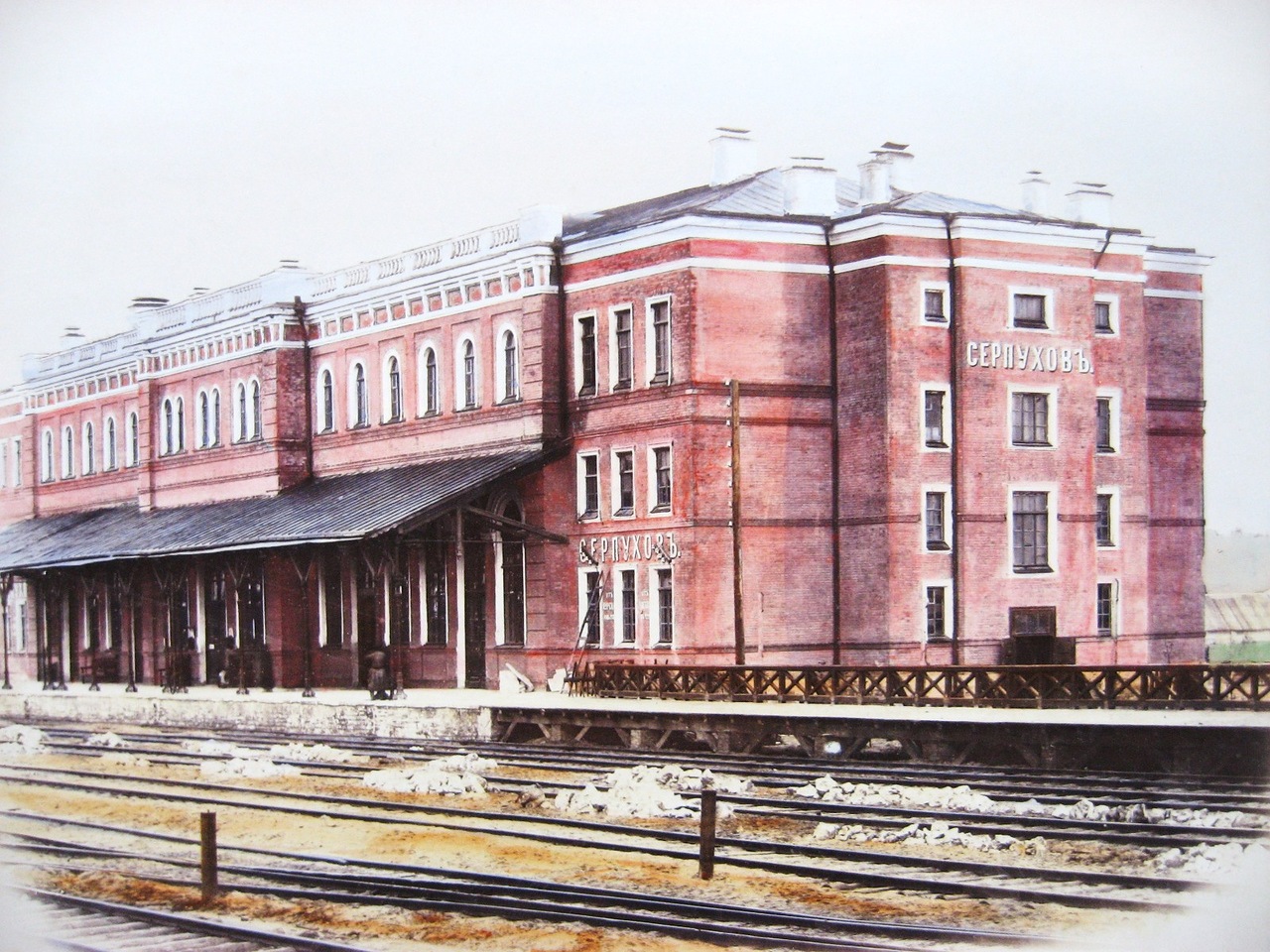 Color Widescreen Photos of Russian Railway back from 1885 - English Russia

Once again, my first reply is not here. I must be doing something wrong when I reply from the email update. This is the 3rd or 4th reply that did not post.

The vivid colors alone are worth modeling.

I need to find a video that shows the vendors removing their awnings from the track when the train approaches.

Yes, they “crank 'em in” (the awnings) sometimes only seconds before the train arrives at their stall.

No idea if I will have something appropriate on the workbench as the time approaches but count me in for now!

Yes, I was trying to find that video but then settled for the ones I found and posted.

Talking about track-side structures and activities

what’s the start date on this?

Ladies and gentlemen (I hope we can recruit some lady modelers), my apologies for being asleep at the switch for so long. There’s maybe two weeks left on the inaugural railroad campaign, how about we start this campaigne this very weekend, March 19th? I just received a new structure model that I’m excited about starting. And I also still have the structures that I was going to build for the inaugural campaign.

As far as starting the new campaign goes, what are you all think of the idea of having more than one railroad campaign going simultaneously? The poll I put on Armorama about military modelers with railroad interests, somebody suggested a military and railroad theme campaign. I’m all for that too. I’m also appreciative of the “hanger Queen” campaigns on Aeroscale, i.e., the campaign to finish the unfinished languishing on our in
-progress shelves.

Your thoughts? Too much? Divide and fall? Too many irons in the fire?

I think two at the same time is fine, especially if one of them has a theme, like the new one.

As for me, if you start a military and railroad theme campaign, I’ll find something to put into that also.

I’m not really a railroad guy, but am very interested in railroads in settings of war (well, Eastern Front, WW2). And although I don’t see myself doing a pure train for the sake of doing a pure train, I spend a lot of time looking at pure train models and layouts and admire the work.

I feel, okay, let’s do it. We’ll start the railroad structures campaign this weekend, and tell our friends over at Armorama about our military theme railroad (railroad themed military subject?) Campaign to start in… What do you think? Next weekend, two weeks hence, a month?

I really don’t know anymore if I’m more of a railroad modeler that builds airplanes and military subjects, or vice versa. I imagine it just goes back and forth. However, realization that I’m probably never going to get an actual layout built is making me wonder how I should concentrate on Railroad subjects now. I haven’t given up, and have a plan. I think that mixing Railroad and Military should be very easy and a lot of fun, considering how many modelers like to mix subjects: tanks overrunning an airfield, helicopters etc, and now even with some neat landing craft models, mixing land forces with maritime subjects.

Whether it’s a large expanse of diorama like some that we’ve seen, i.e., the BR52 at the train station diorama, or even vignette dioramas of a freight car with soldiers milling around it, there’s just so much that can be done by putting together military activities witb rolling stock or even simply railroad tracks. Mike [156thspc] has posted some amazing examples armor and transported on rail cars, and using model railroad Bridges on Military scale uses.

sure on structures, maybe a month or so on the next - i get the sense there are a lot of builds folks have underway…

Is this underway now?

I plan to do a signalman’s house. It won’t be any different than anyone else’s house I imagine, except that it will be next to a track that has a mini-art signal tower on it.

So, it will include a house, a yard, a track (perhaps two), and a signal tower. I’m not sure the signalman’s house would have the signal tower next to it, but that’s the plan. I have a picture of the house in a book on the Eastern Front in WW2. I’m not sure I can make an online version of it.

Is this underway now?

So now I have to figure out what I want to build. So many choices. Some of the buildings that Mike [165thspc] has shown us have me planning plastic kits, while craftsman and resin kits are on the table, too.

*“highball” = from an early form of signalling train movements by hoisting a large ball up a pole, a high ball was the signal to start the train and proceed at maximum permissible speed.