I seem to remember reading somewhere that German open top vehicles (in this case Sd Kfz 251s) , the fighting compartment was painted the same as the exterior and driver’s area was elfenbein. Later the whole interior was the exterior color (by this time dunkelgelb. 'Course now I can’t find the reference.

As far as I know, only 251 Ausf. A got the driver area in elfenbein.

All that had Dunkelgelb exterior got it inside as well

Dunkelgelb came in Feb 43. Ausf Cs were made in 42. Ausf D started production in 43 but not sure when (Maybe varied by maker?) Wouldnt the Cs be elfenbein too.
Least the ones made afore the paint switch

As said, As far as I know, only 251 Ausf. A got the driver area in elfenbein. 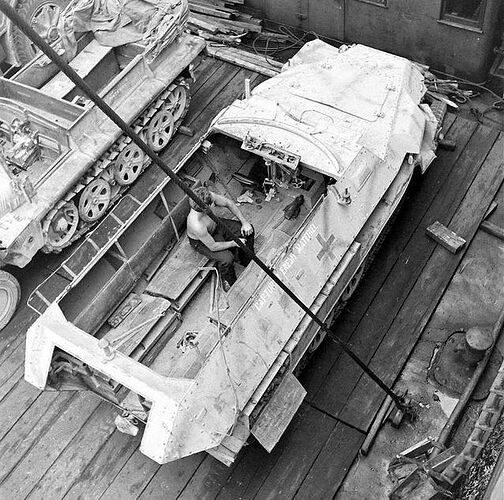 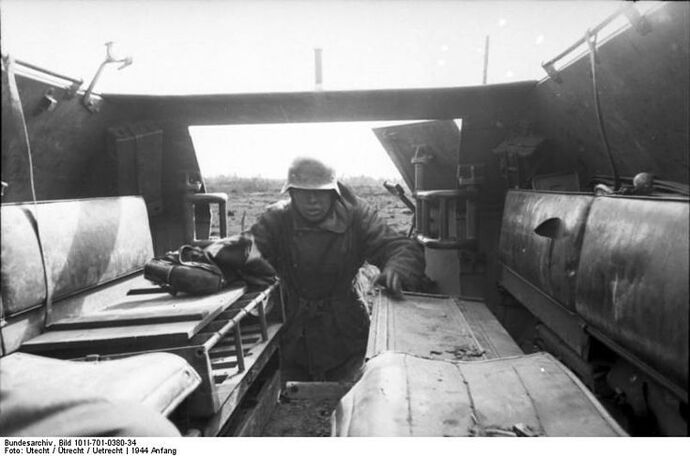 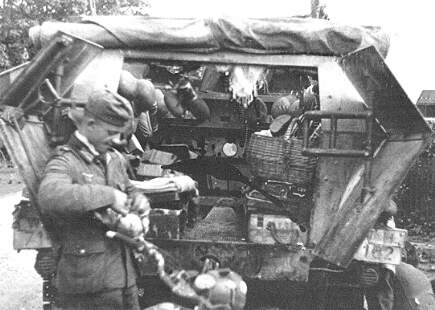 First one is interesting … post war on it’s way to the US? Says captured and the fitting on the right looks rather ship like. Looks like an Ausf C. Was there an overlap between C and D prodution? Or, if an early vehicle was repainted would the drivers area have been repainted too. Looks like Last one, from the uniforms, looks early on but the paint job doesnt look like dunkelgrau.

Stumbled into an article from another build an his info was Ausf A/B = Elfenbein. C= Dunkelgrau, D=Dunkelgelb.

I have to ask. What color is “Elfenbein”?

What color is “Elfenbein”?

I did not know that!

Elfenbein morfed into cream weiss if i remember correctly.

Just to muddy the waters even more, perhaps the captured Ausf C came from North Africa and is in desert camouflage? That certainly seems the case with the Sdkfz 10 next to it.

I found this link about Sdkfz. 251/open-topped vehicles’ interior colors. It states that they began with the inside and out being the same color, but the driver’s area was in Elfenbein. However, when the Luftwaffe began losing air superiority, they began not using the Elfenbein due to it being easy to spot from the air. When they began using Dunkelgelb, they put that on the interior.

Additionally, on the Sdkfz. 251/8, the one with the canvas roof, would they have changed the inside colors, or would they ahve kept the Panzergrau/Dunkelgelb?

Is Dunkelgrau dark gray? What does it look like compared to Panzergrau?

It states that they began with the inside and out being the same color, but the driver’s area was in Elfenbein. However, when the Luftwaffe began losing air superiority, they began not using the Elfenbein due to it being easy to spot from the air. When they began using Dunkelgelb, they put that on the interior.

The Luftwaffe really did not lose battlefield air superiority until early 1944, well after the change over to the Dunkelgelb base color. In 1943, Allied ground troops in the Mediterranean theater and Eastern Front were regularly subjected to Luftwaffe ground attack. Each side could achieve temporary local battlefield air superiority for most of 1943 by concentrating their air assets. But the Allies were building a numerical edge as the year went on.
Most likely the reason was one of cost cutting or speeding up production time by removing the use of the Elfenbein in the driver compartment. It’s quicker and easier to paint one color than two, as well as reducing the number colors of paints required to be kept on hand at the production line.

That makes sense. At what point did the wehrmacht not paint the inside of closed vehicles like tanks?

Dunkelgrau IS “Panzergrau”. RAL7021. Panzergrau is something model paint makers made up. 7021 is very dark … almost blusish black. Pre war- till after Poland was used with a very dark brown. (hard to see in photos due to lack of contrast… Same as RAL8000/ 7008. Between lack of contrast and dust looks like a single color. AND feldgrau (field grey) is not a vehicle color … unless the vehicle is wool. Closed vehicles were elfenbein (mostly) to help reflect light inside. Inside of hatches usually painted the exterior color… so when opened you didnt have a big white patch in the middle of your camo saying “aim here!”. German Armor Camouflage (panzerworld.com)
o

So the gray german vehicles are just a dark gray then?

What type vehicle? Inside? Outside? What time frame?