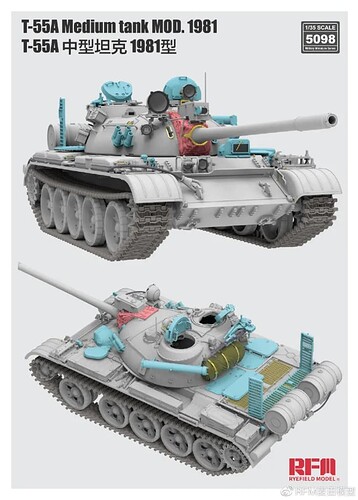 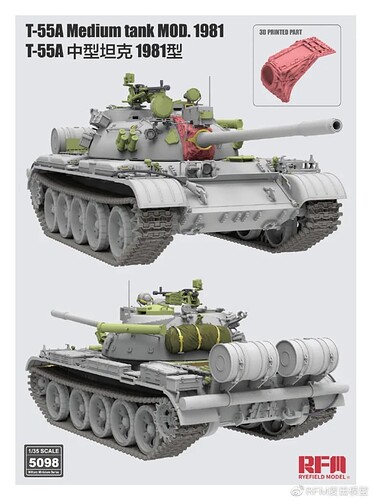 That’s actually nice. Winder how it’ll fare in comparison to the MiniArt T-55s. I got thf one with the OMSh tracks on the build stash. 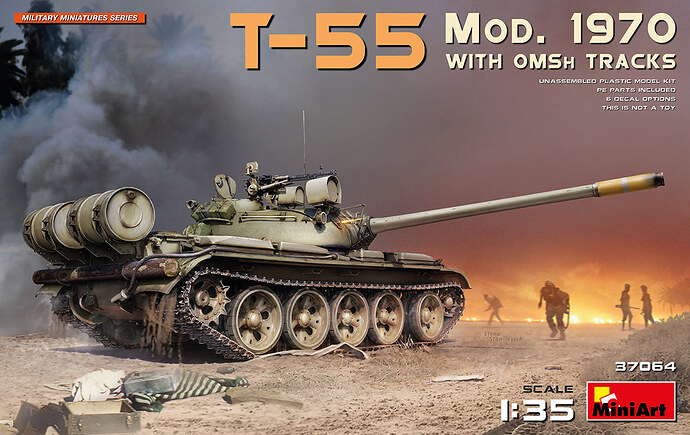 Good to see another T55 series from RFM.

This is from RFM.

Finished that kit recently. Builds up quite nicely. MiniArt T55s are a bit fiddly and overly complicated in my opinion but they do look good when finished.

I started one of their 54s and couldn’t finish it.
My hats off to you.

Yeah, they can be a bit daunting. For me the trick was to build the entire lower hull tub before trying to add all the the torsion bars and the other running gear fittings. Lots of small fragile fiddly parts to deal with as well. Hopefully RFM will be competitively priced and be a bit more builder friendly.

Having built tank kits from both companies, the RFM kit promises to provide a better, cleaner build with a more enjoyable outcome and far fewer parts count.

I agree.
I’m hoping that they do some other versions as well.

Given that we have already a ton of decent T55 kits, I wonder why didnt they tackle the T62 ?

While this old adage is true. Making something that doesn’t exist or hasn’t been done justice has its own inherent value.

For example in this thread there has been a lot of comparison between this and the miniart variety. Someone with 10 miniart versions is less likely to go pick up an RFM. But, if they did a T-62 I know they’d have my money

Still, I am happy RFM keeps pumping out new kits. I am yet to build one of theirs. But I have a few in the stash. The challenger 2 they did looks fantastic in the box

Built about all the MiniArt T55’s sans interior kits. Love hate relationship. Really dislike the complex nature of the builds and the many small finnicky parts but really like the painting and decal choices they offer. And, there’s no denying that they really finish up nicely. I would certainly purchase a RFM offering of the T55 as I like the subject matter and would be curious to see how theirs assemble and build up compared to MiniArt.

Zvevda makes which I believe a good T62.
I find miniart kits plastic too soft and have too many parts for my liking.

I 100% agree on the soft plastic. It’s still the only kit where I’ve had parts disintegrate while trying to take them off the sprue

So, in essence, very Bronco-ish.