I’m just curious if anyone has taken the time to compare the two subject line kits. I know they are not ‘the same’, in that the Tamiya has the Op Telic desertized ‘spaceship’ looking additions. In fact, 11 years ago when I reentered the hobby, the Tamiya kit was the very first model I made! Unfortunately, because it was the first, that tank has a lot to be desired (my build, that is), and the paint and weathering really need to be redone quite significantly. My plan was, with the two Tamiya kits I have, was to build a better ‘straight’ Op Telic Chally 2, and I got the Accurate Armour upgrades for the turret extra armor and slat armor for the hull which I still, someday, plan to do in the mostly green, but with some sand colored parts. I have series of great photos of the real tank I want to do in that scheme. However, I like the ‘regular’ Challenger 2 as well, and I have on order the newish Rye Field ‘regular’ Chally 2 (I already have the RFM Megatron in my unbuilt collection). I was just curious if anyone has done a comparison of the parts that are the same for the RFM and Tamiya Chally 2, whether there is a significant improvement to the detail provided by the RFM kit. The Tamiya, of course, has the legendary fit, and while my experience with other RFM models has been good, they are nowhere near the kind of fit and engineering of Tamiya. But then, few kits are (other than my experience with recent new tooled Eduard 1/48 airplane kits). But I would like to know if in the intervening years since the Tamiya desertized kit came out, if RFM has improved on any of the details, either in the build, or in the molding. Curious if anyone has bothered to do a comparison of any kind. Thanks in advance for any thoughts anyone may have.

Hi Curt, not sure if it will help but I recently received the standard RFM Chally 2 and would be more than happy to photo each sprue and the other bits and put them here for you to look over. I don’t have the desertised Tam Chally 2 so sadly can’t help with that one. If you do want the RFM sprues captured and put here just let me know. John

Hi Curt. I have just recently finished the RFM Chally 2 and the Tamiya Deserized Chally 2. I built the Tamiya well over a decade ago, but only just got round to painting it last year. The RFM Chally doesn’t have quite the fit of the Tamiya but has a few nicer details like the running gear, drilled road wheels, excellent if time consuming workable tracks, included photo etch for engine deck and some other small details. With some extra care during construction the RFM builds into a really nice piece. Overall I don’t think there is a quantum leap in sharpness and detail with the RFM kit, and feel the only issue with the Tamiya kit was the lower hull and running gear but that is almost completely covered with the skirts and extra armour anyway. I wouldn’t hesitate to recommend either kit frankly, the detail is very similar as far as I can tell. The only difference I noticed is the turret rear seems to be taller on the RFM. I’m sure others have different experiences with and opinions of these kits but that’s my tuppence worth, I hope it helps.

Here are links to my builds, the RFM thread has more pics side by side with the Tamiya at the end;

Hello again, I thought I would copy over the first post on my current build from the old place so I can continue on here if the switch happens before I am fully finished. So here it is with single pics of all the progress steps so far with full info on the old place; https://armorama.kitmaker.net/modules.php?op=modload&name=SquawkBox&file=index&req=viewtopic&topic_id=288040&ord=&page=1 Ok so onto a nice simple single colour paint job after the Berlin Brigade shenanigans. Tamiya Challenger 2,… 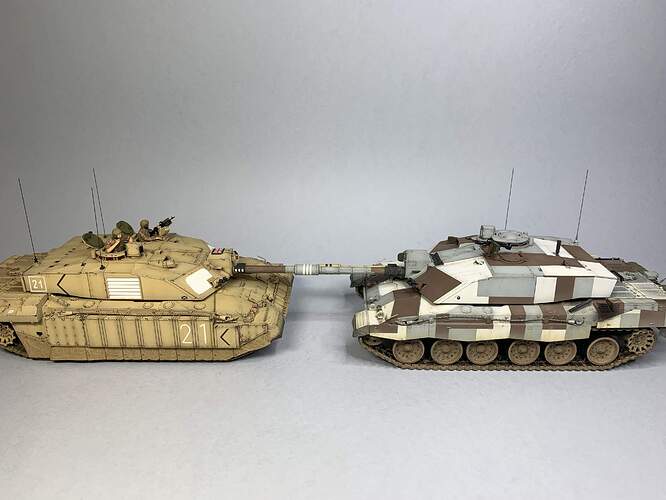 Hi John…that is so kind of you…but i don’t want to ask you to go through that much effort. It won’t be too long until I get my own RFM Chally 2, and I’ll be able to do my own comparison. Frankly, I was asking because I wanted to know if, given the RFM Chally, if it would make me want to set the Tamiya kits I have aside and not want to build them. Iwatajim (next post) has kind of answered that question for me…and the answer is that it looks like I will still be satisfied with the Tamiya kit and want to continue with my planned builds of a standard Op Telic Chally 2 and the up-armored version used later in Iraq. Thank you so much for your kind offer, though!!

No probs Curt, will look forward to seeing both Chally2’s when you get onto them

Jim…thank you SO MUCH for your response! I looked at your posts about building and painting the Berlin camo version of the Chally 2, and WOW, what a great build and fabulous work on the paint and weathering! Many years ago, now, I bought the Accurate Armour new style wheels (with the holes) that I anxiously painted and then set aside, assuming I would be using them at some point. Looks like they have been superseded by the RFM kit and its wheels. All this is getting me anxious to do the Chally thing. I am in the middle of the Meng Russian T-90a build, and that has been challenging (no pun intended). I did the kit tracks for that one, and I am guessing they are similar to the RFM Chally tracks. Some time ago, I did the kit tracks for the RFM full interior M1A1/2 Abrams, but I’ve not finished that one yet, and I’m frankly afraid that the tracks will fall apart once I bend them to their final shape around the sprockets and running gear, even though I tried hard not to do too much to impede the full articulation of those tracks. Thanks for the input on the detail differences. Again, great work, Jim!

Thank you, John. Will post when I get to them

No worries Curt, and thanks. The tracks on the RFM Chally were fully articulated, and held together through all my ham fisted handling. They just needed careful gluing, I used mr hobby mr cement deluxe which worked a charm. Good luck with all your builds!