Hi all, it’s been a while since I last built any 1/35 modern armour in my late teen and early twenties.

To re-engage with the subject I thought it would be great to build modern AFV’s from the SADF (South African Defence Force) when they had AFV and troop carriers featuring some of the most forward thinking designs. MRAP is now a catch phrase in wheeled troop carriers, the SADF had the Buffel in the 1970’s. The French Panhard ML90, more commonly known as the the Eland 90, also fondly referred to as the “Noddy Car” due to the nodding action of the vehicle on firing it’s 90mm gun, was the mainstay infantry support up to to introduction of the Ratel APC. The Eland could no longer travel as fast as the Ratel off road in the bush warfare environment of north South West Africa (Namibia) and south Angola. It’s interim replacement was the Ratel 90, which effectively was the Ratel APC specially fitted out with the Eland 90 turret, these AFV’s ran hit and run tactics defeating Soviet T34-85’s and T55’s during the course of the bush war.

The true replacement for the Eland 90 was to be the Rooikat, but this did not make it in time for the bush war, but embraces all the doctrines of the SADF’s mobile warfare in its design. Light, durable, range, speed, firepower.

The version I’m intending to build is the standard 76mm variant, there is a 105mm export variant and a technology testbed variant with an automated 105mm turret as well a prototype SPAAG & SPAAM variants in the works. 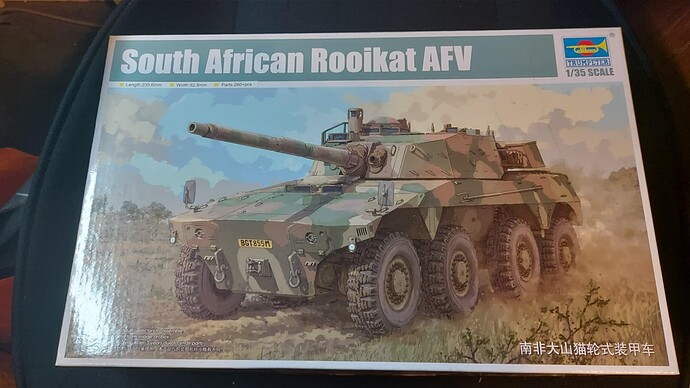 This will be fun, I intend on using SADF colours for my build and not the camo pattern sported by the SANDF version.

Enjoy your build! However take note that the fit of the front armor plate with the hull sides may be tricky.

Thanks for the head up!

Nice kit but be careful with the suspension.

I have recently finished this one too. As Olivier says, take care of the upper hull fit. Anthony is on the button with the suspension - the shock absorbers do not fit correctly. I was more fortunate than most, in that I test fitted and trimmed everything before gluing. I posted info in the Trumpeter Group Build thread:

Time for an update [image] Hull basically done, just a few grab handles to apply and a couple of holes to fill in a side bin. References show no holes. Fit here was generally good, although a lot of flash meant a lot of test fitting and clean up, so maybe I was lucky. I have read others have not been so lucky. [image] Test fitting shows tools can be gently placed in their location on the rear after painting, so that is my chosen path. [image] I am currently working on the turret. Kit ba…

I did this one, when they were first released. 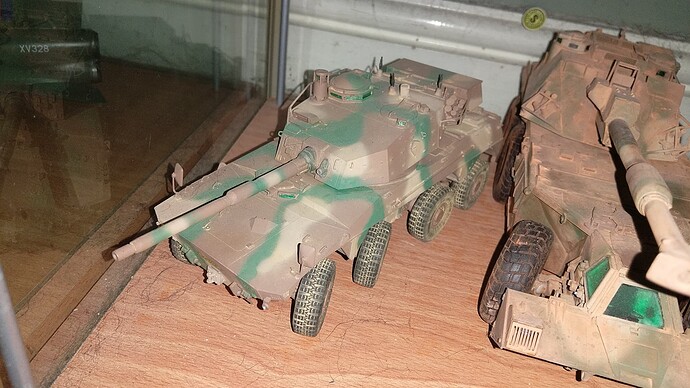 Plenty to keep me busy for a while.

If you have the AML 90 from Takom or Tiger Model they are not the Eland. They are very different at the rear.

The original series that were delivered( assembled in house), are AML90’s, the rear and body extended, changed on the 3rd product run. I believe.

I’m still after both AML 90 and 60, ratels when I’ve got the cash and visit south African, for the resin one’s,
done both the Oilfants a few years ago. 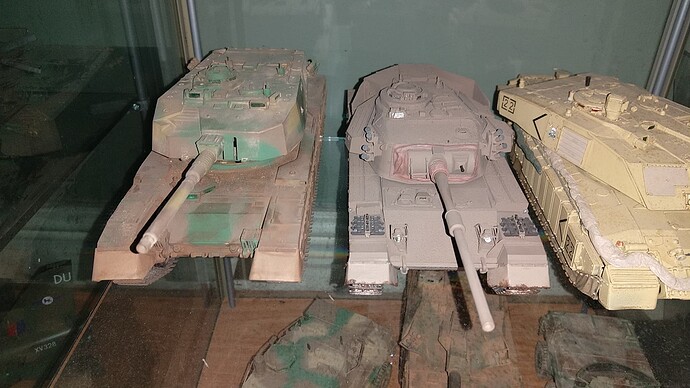 I was led to believe the name ‘Eland’ was only officially given to the vehicle when the new engine was added and fitting that, being a water cooled engine, not an air cooled one, necessitated the changed rear. I’ll take your word for it though, Frank as I have only cursory knowledge on this vehicle. Cheers for the info.

I would love get hold of those 1/35 Baxmodels resin kits of the Ratel 90 and Buffel, missed out on an opportunity.

My current source reading is below 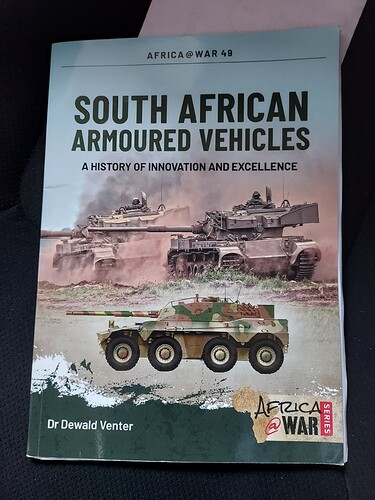 This has proven to be very informative.

With regards to the Eland 90, the Takom AML90, does require remodelling of the rear engine compartment to reflect the Mk7 variant.

Another point is that the tyres supplied with the AML90 are incorrect. 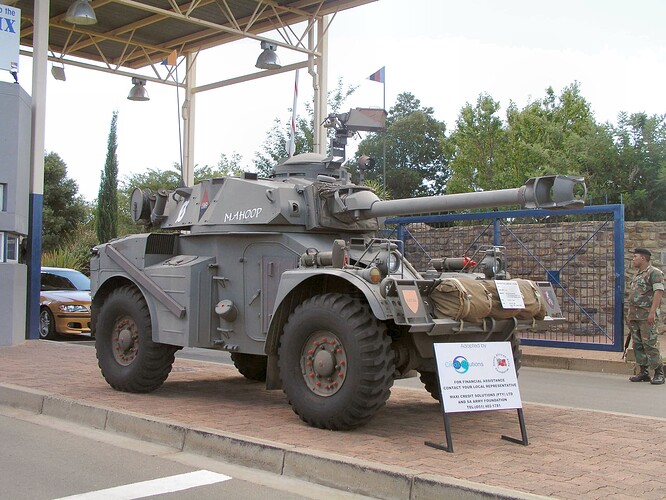 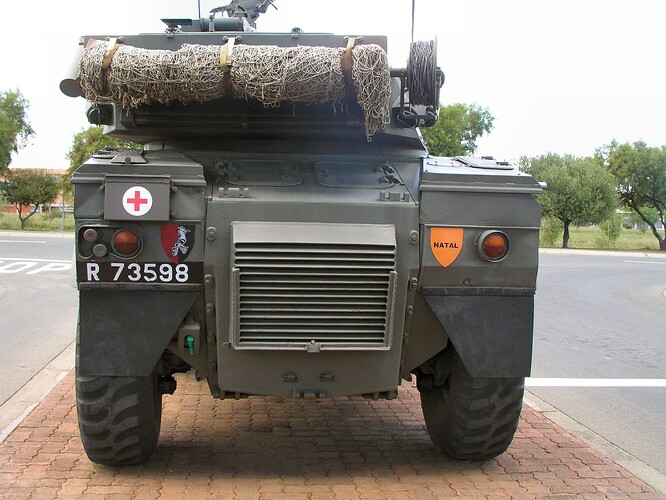 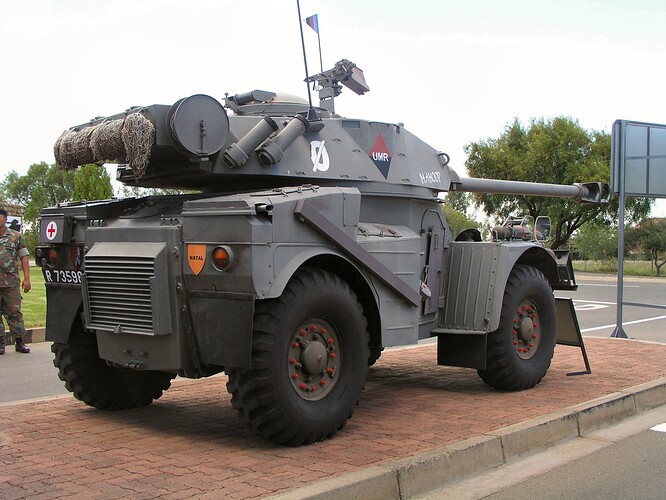 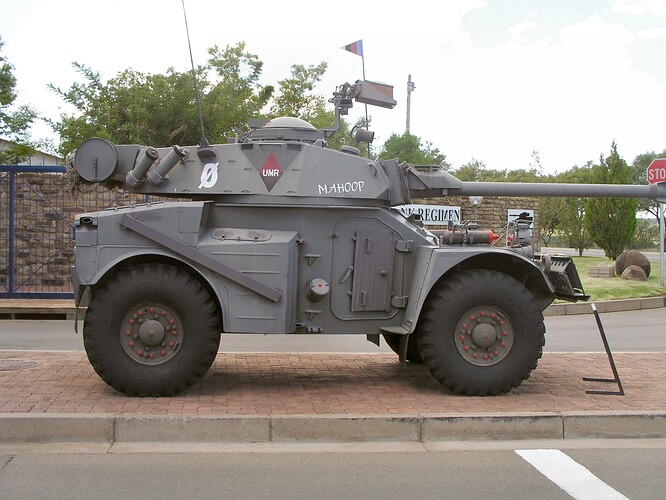 Started on the Rooikat, as expected it is not as diminutive as the “Noddy Car”, here are some images of the hull, and main hull components. 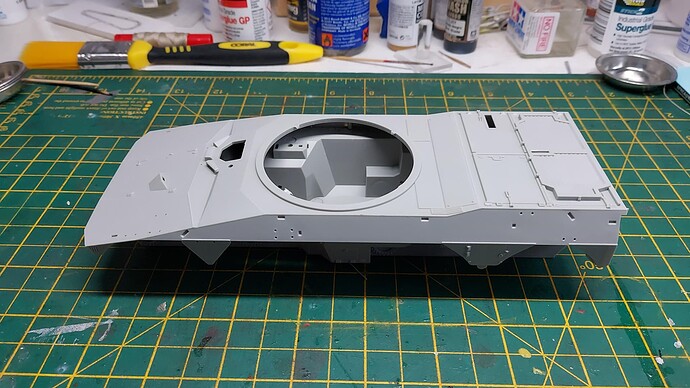 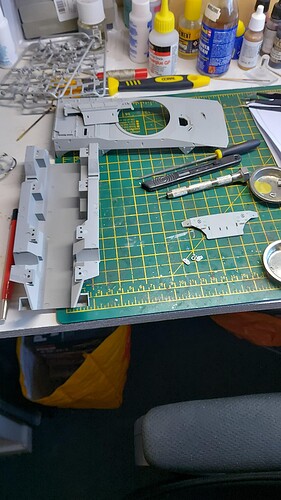 Started the suspension, what a mission for a wheeled vehicle. 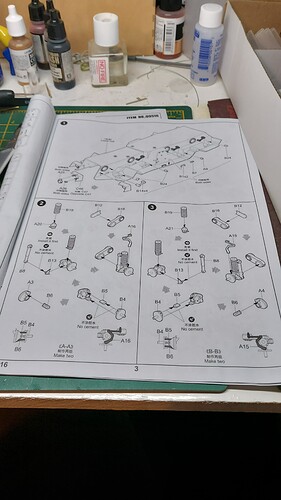 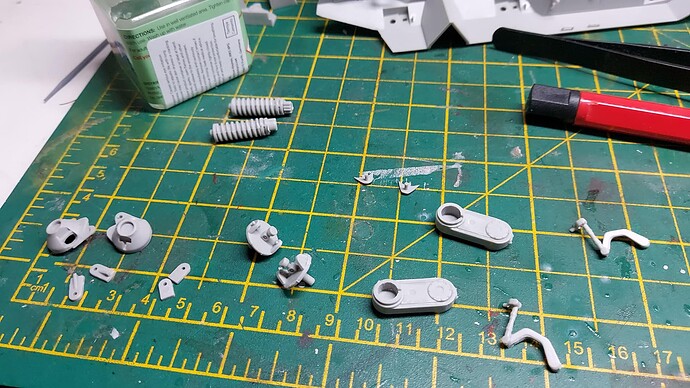 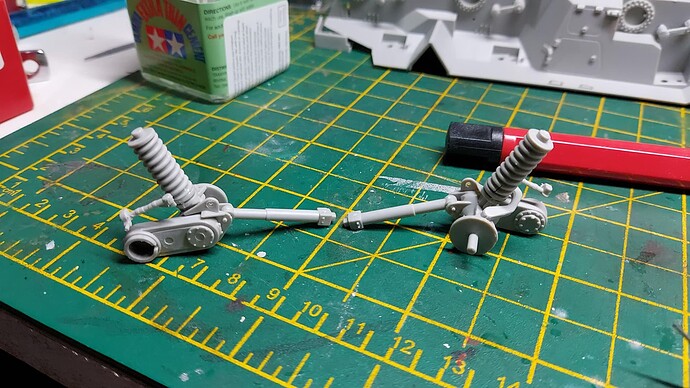 This is gonna take a while…

Anyway, I’m always up for a challenge.

You weren’t kidding about the suspension

That required some additional prepping, patience and dexterity.

Thanks for the heads up!

Watch fitting the wheel hubs to the suspension - they are a super tight fit The joints on the suspension are pretty weak and the holes in the rims may need opening up a touch to avoid breaking them.

Thanks again for the input with regards to the fiddly suspension.
It is now in and ready for the wheels. 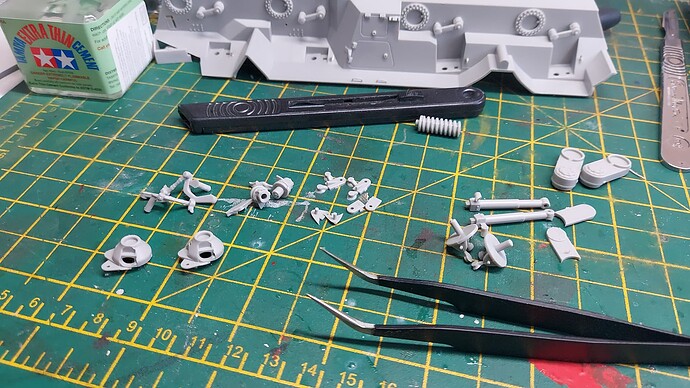 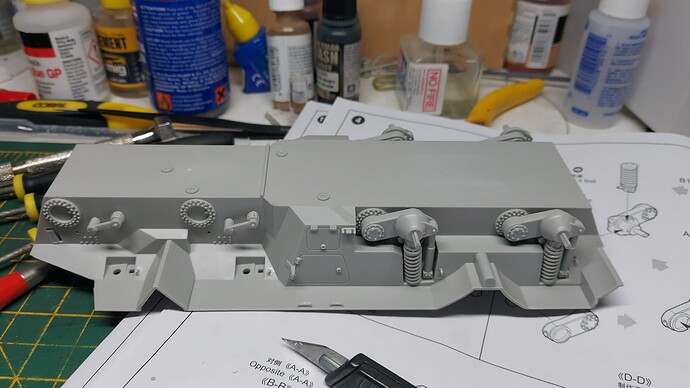 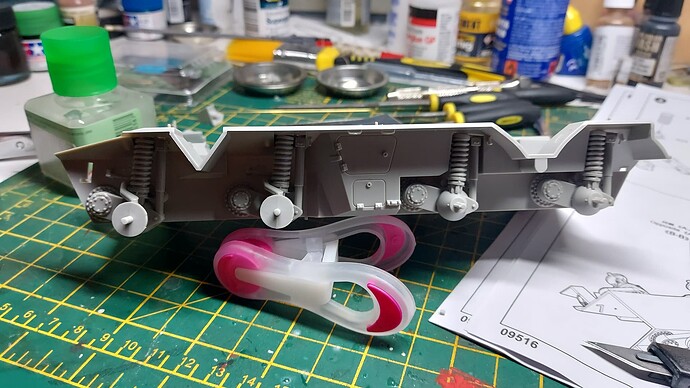 I started on the front and rear hull armour plates. The pinned shackles on the sprue sheet leave alot to be desired, so I decided to rework it. 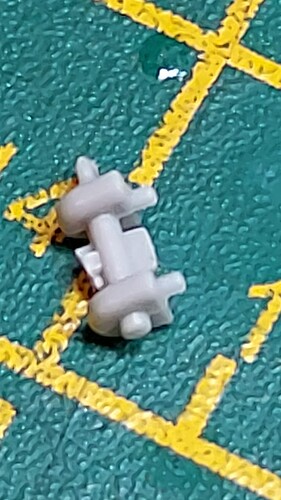 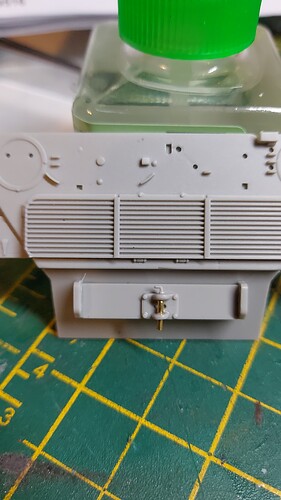 I’m doing this update on my mobile so I’m hoping I selected the correct images.

Till the next update

I’m still after both AML 90 and 60, ratels when I’ve got the cash and visit south African, for the resin one’s,
done both the Oilfants a few years ago. 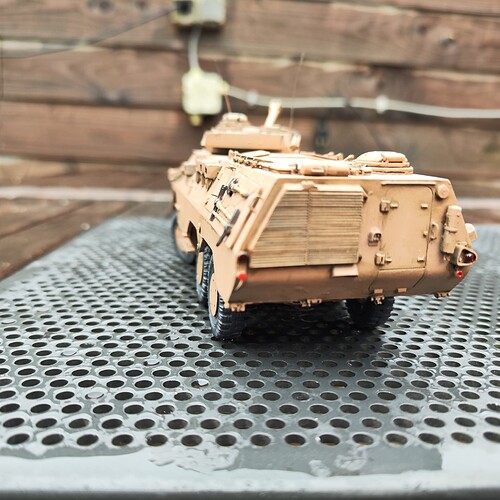 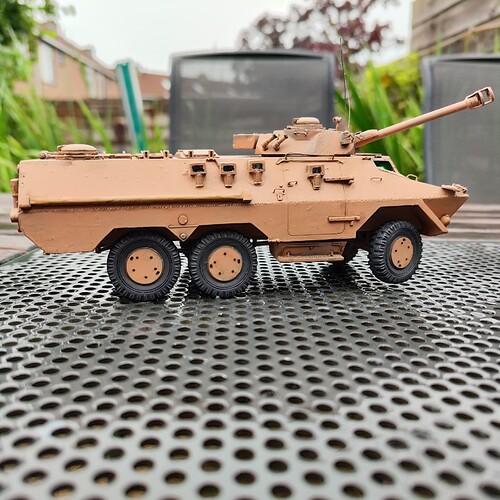 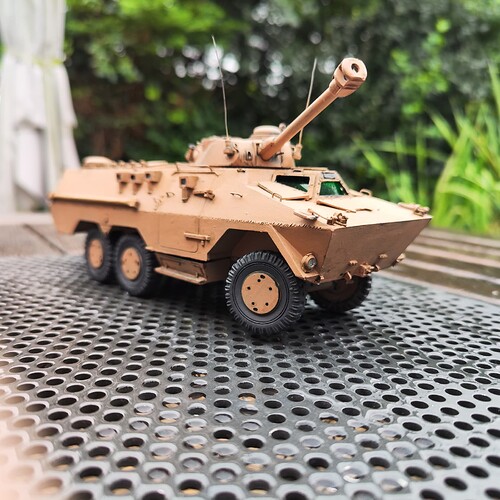 I let slip an opportunity to aquire that, the last time I was in Cape Town. My loss.

Congrats on your acquisition.

By the way, what colour did you use for your Ratel?

This one is from Fine Scale Models.
For colour, I started with a base coat of black primer followed by a topcoat of Vallejo Air Tan Earth Matt 710079.
I used a pin wash of Dark Umber oils all around to create more depth…

Interesting, using the Vallejo Tan Earth. Hataka, propose a BS Dark Earth. That is proving to be very expensive to aquire from Poland. I did get some Vallejo BS Dark Earth, but looking at your Ratel, I will need to look at the Tan Earth.

We come in peace, so shoot to kill…