Ok… I am calling this little adventure done.
To recap a bit, I was going for a What if 1946 continuation of WW2, this involved an anti aircraft missile system based on the Rheintochter which had moved onto a Mk3 system using a longer range and more powerful semi guided missile fired on a repurposed King Tiger chassis.
The unit was also equipped with a resupply vehicle based on a Panther II chassis with a turntable containing a 3 missile reload.
Some pictures of completed vehicles on a basic groundwork area. 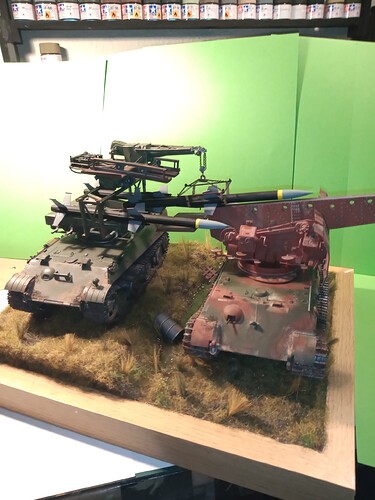 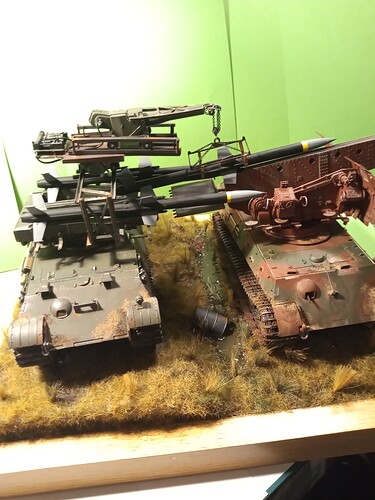 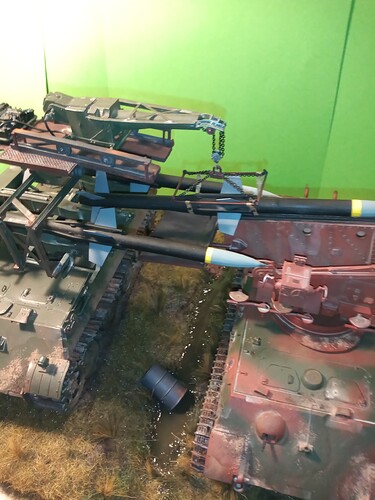 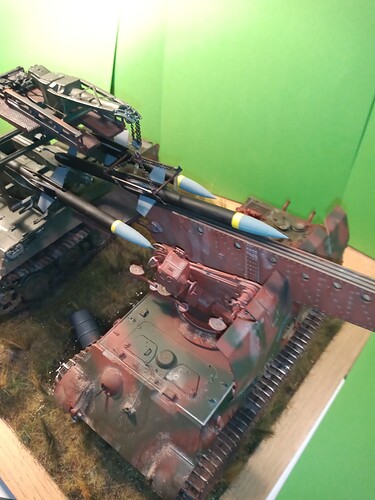 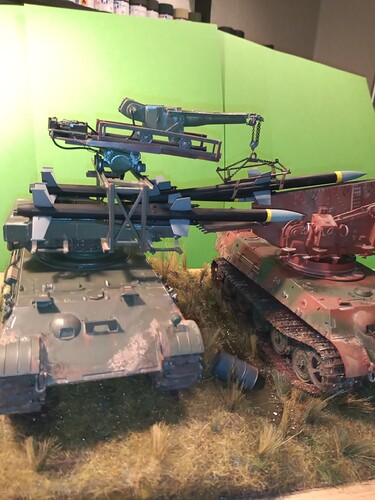 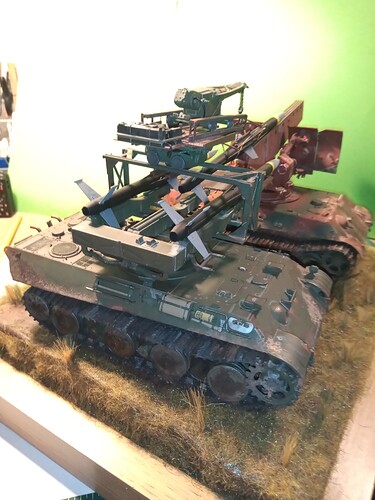 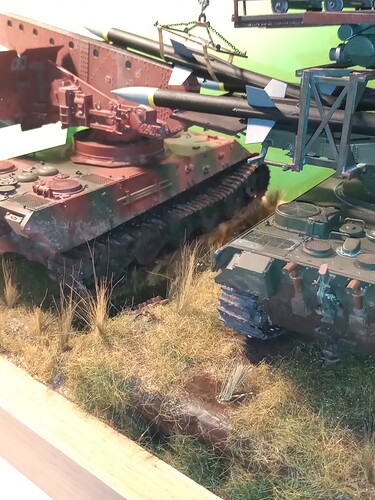 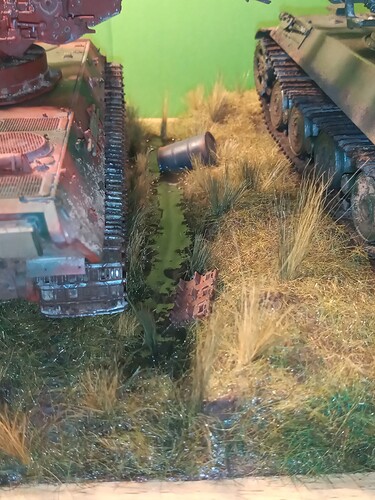 Will try to get outside tomorrow if weather permits and do some natural light images.

Fantastic job John. Those paired vehicles are really a ‘sit up and take notice’ dio element.

It has been fun watching this develop.(and teasing you a bit along the way 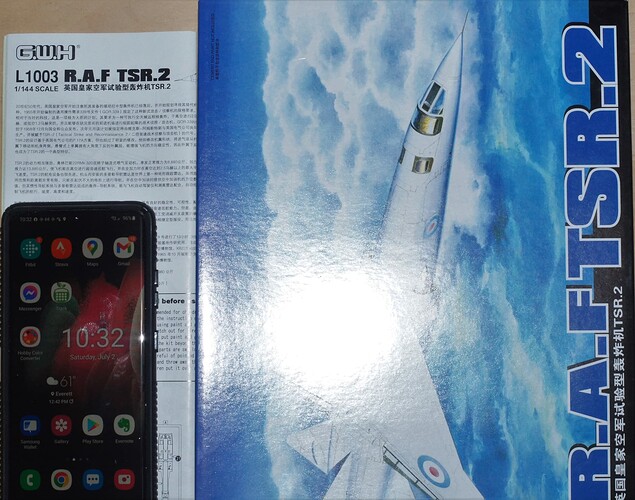 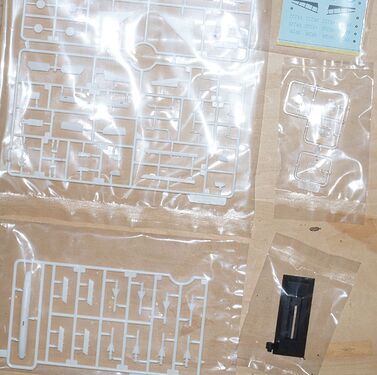 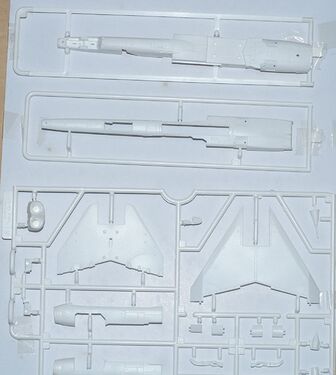 TSR-2 Fuselage Start small1372×1527 154 KB
The Plan.
The 3 most controversial projects of the 50’s and 60’s were the TSR-2, Avro Arrow and the F-111. When the TSR-2 and the Arrow were cancelled, there were rumors that the missions that they would have carried out could be handled by the F-111. Of course, neither Canada or the UK ever bought F-111s.
My idea is that the F-111, got cancelled and the USAF bought the TSR-2 instead. So I wanted to do a TSR-2 as one of the planes from Operation Combat Lancer. the first combat missions for the F-111 in Viet Nam. A search of the Internet didn’t reveal any 1/144 Combat Lancer decals, but it did turn up a 1/144 F-111F kit with nearly 2 complete sets of decals from Operation El Dorado Canyon. So a slight switch in plans. A TSR-2 in camo over black, with F-111 markings. The kit comes with a set of pylons and 4 UK Sea Eagle missiles. I think I’ll paint them up with “lenses” so they could be controlled by the Pave Tack pod in the bomb bay. I was thinking of calling it the F-112, but apparently many of the designators between F-111 and F-117 are taken up by captured versions of Soviet fighters. I may just select one and ignore the Soviet birds.

Great plan, Mark! It is going to look awesome in SEA camo!

Well, the challenges started immediately on this one. 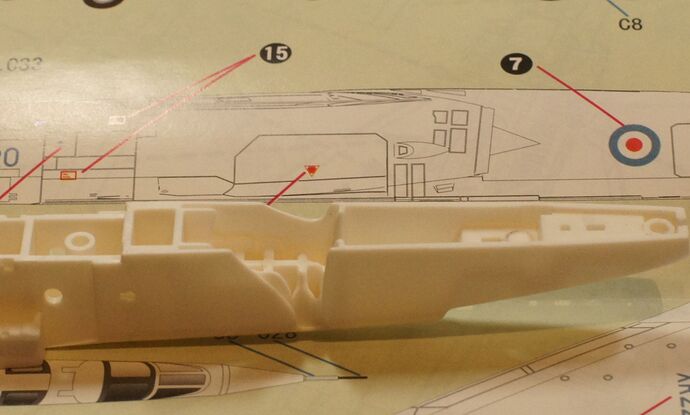 Hopefully, I can graft in a couple of patches and hide them in the camo.

Wow, that looks nasty, Mark. Rare to see this kind of miscast on newer kits.
Hopefully you can fix it with some plastic card and putty.

A short shot in the middle of the fuselage 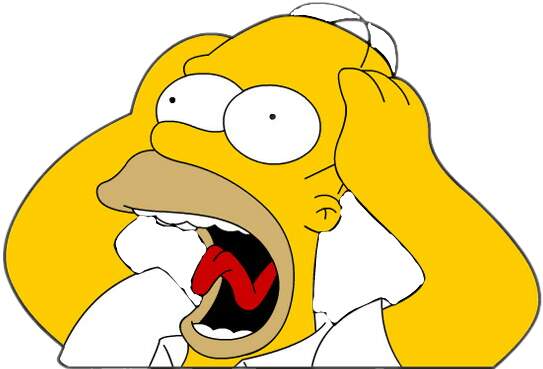 Ain’t that the truth!

@Johnnych01 Awesome!! It is great to see all the elements finally come together. Definitely something to be proud of.

@md72 Bummer on the short shot. Hopefully it salvages well.

The fix begins. I got some backing strips into place, now I can build up the outer skin to match. Since I was planning on in flight, the loss of the gear well isn’t a factor. 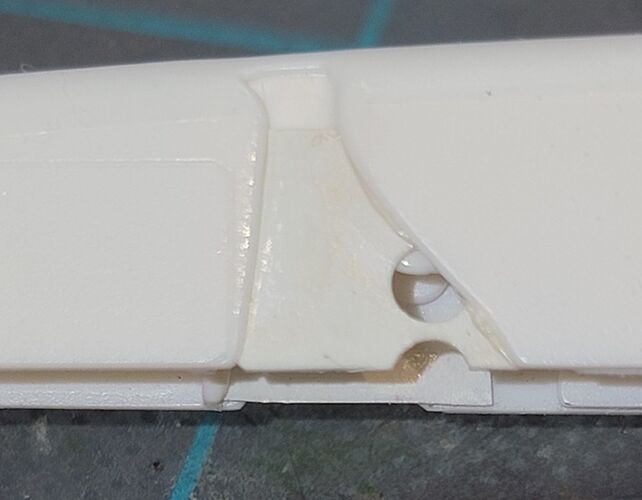 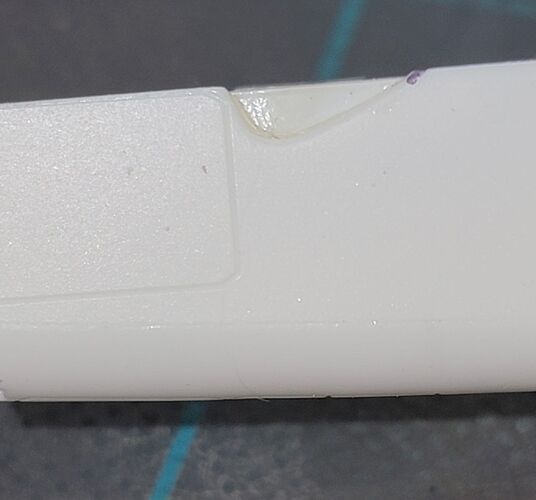 Good start on fixing the holes. Maybe build up with thin plastic card in layers and then smoothen out with putty? That should keep sanding to a minimum. 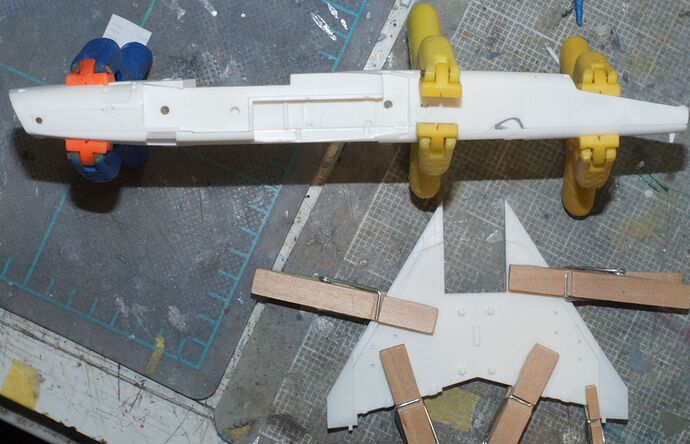 Plenty of “Alternative Armor” seen here on this thread so I am going to throw yet another log on the fire.

I call this my "Sd.Kfz. m88". It is a paper panzer but in this case the paper was mine! 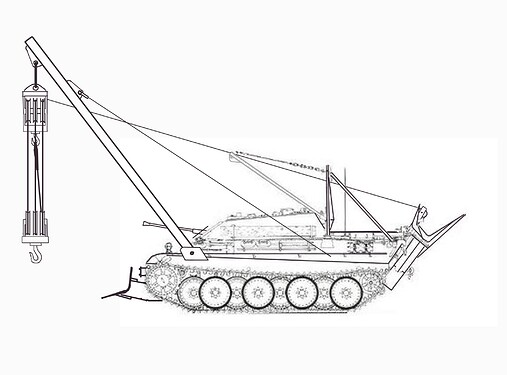 Original “paper” design drawing shown above: (How the plan began.)

I apologize if you have seen this before as I have posted this in at least one other “paper Panzer” thread. 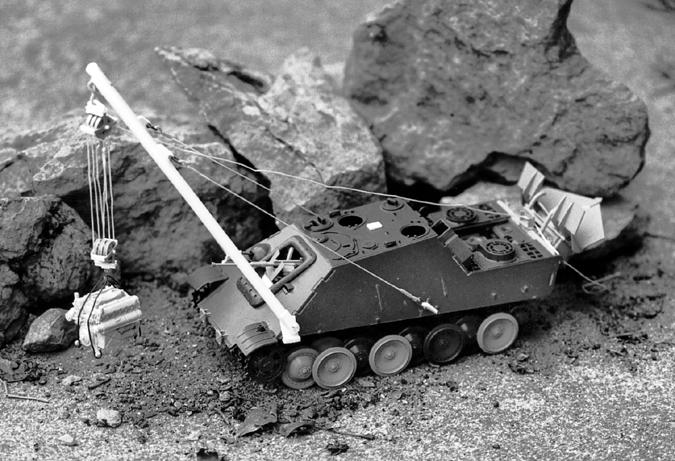 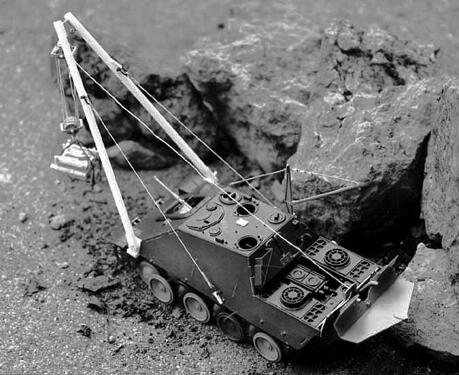 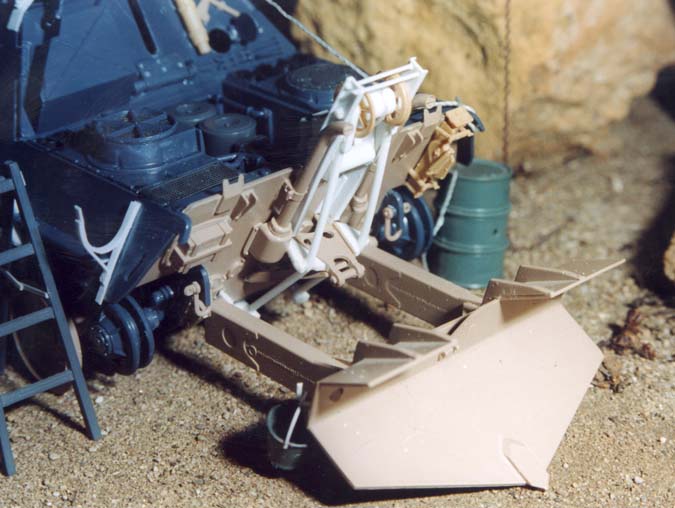 BergeJagdPanther
And there is a full Berge Winch tucked inside there as well. 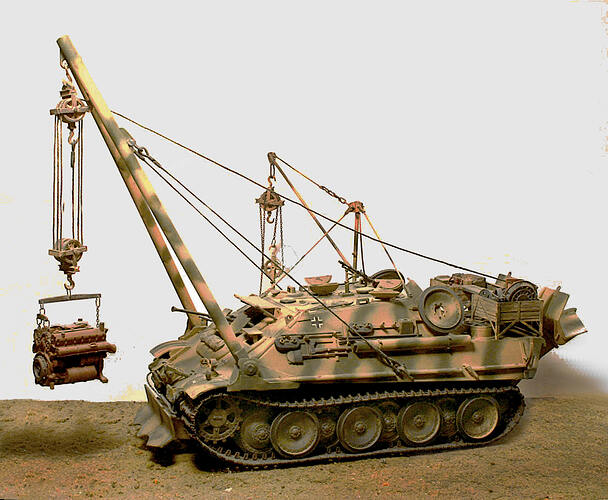 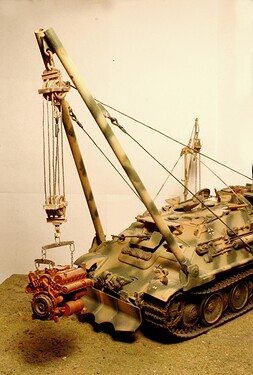 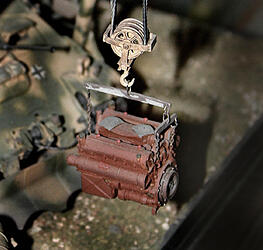 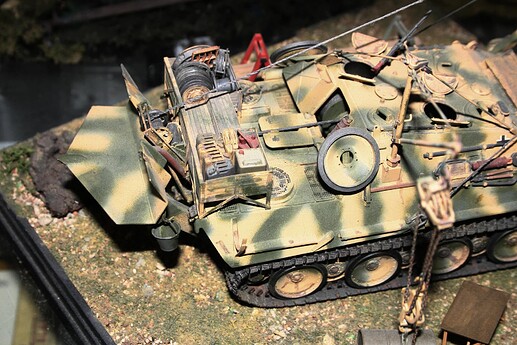 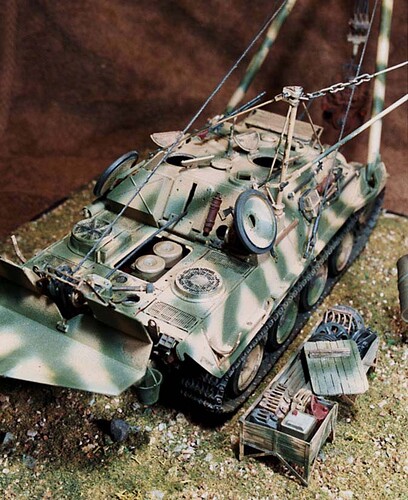 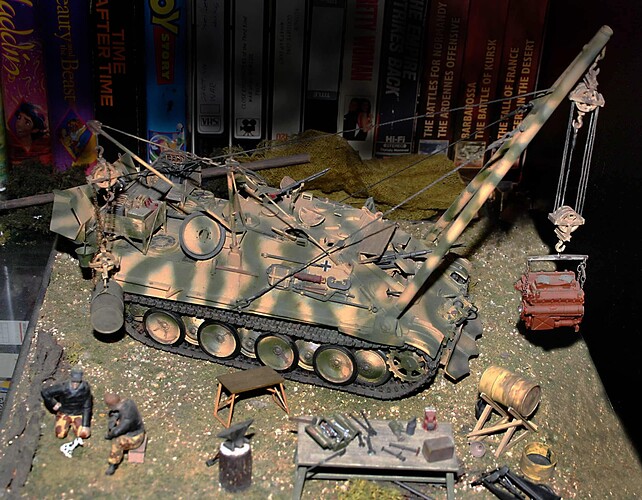 A progress shot of my LAAT - ready for decals

It is one of a set of two I am building for the Star Wars legion strategy game. 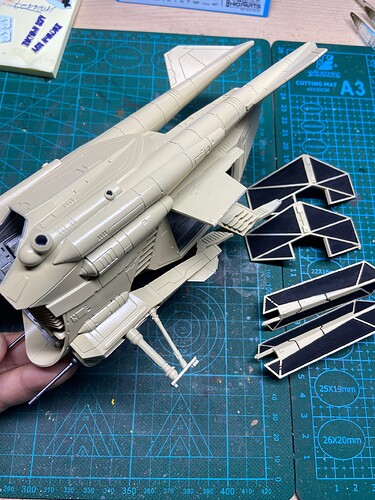 That looks big. You have any box art for it Jesper ?? 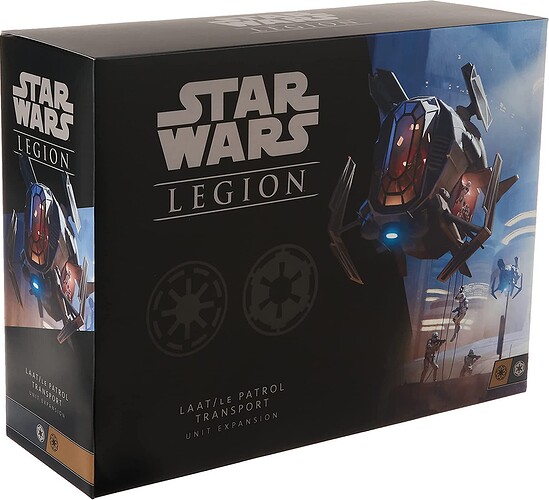 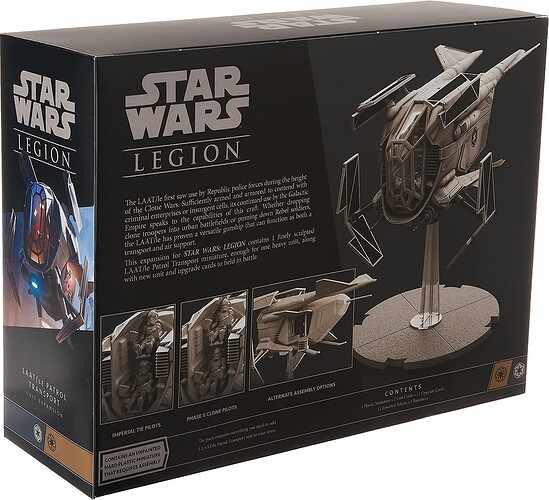