I built this model quite some time ago: 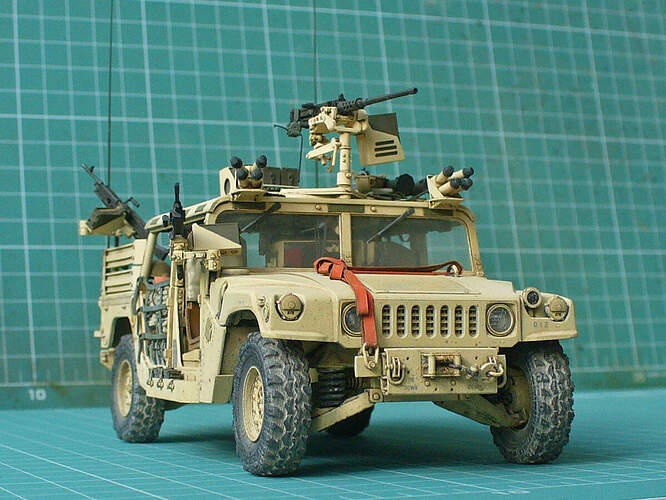 Some might remember the blog on the old forums:

Now I’m hoping to finish of the model by making a base with some figures. 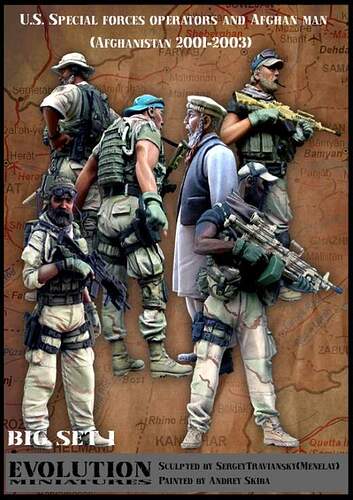 US SF Operators and Afghan Man

I decided to replace the weapons with Live Resin offerings which are a bit more detailed: 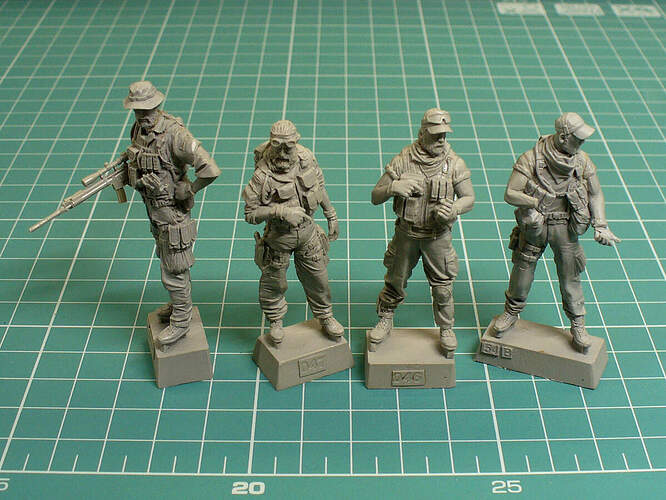 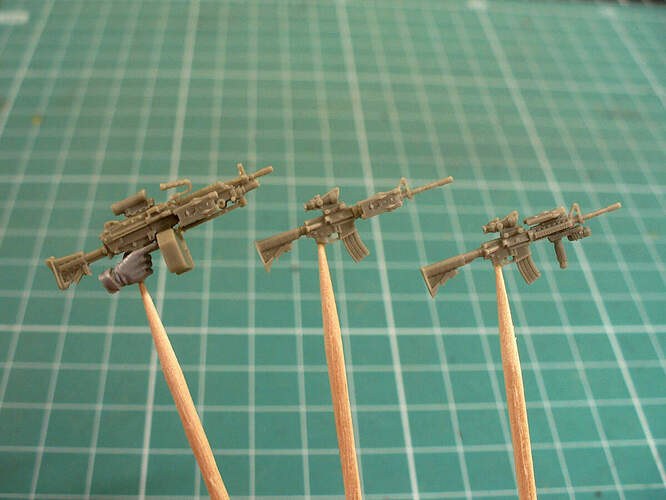 This is a scene I had in mind… Afghanistan terrain: 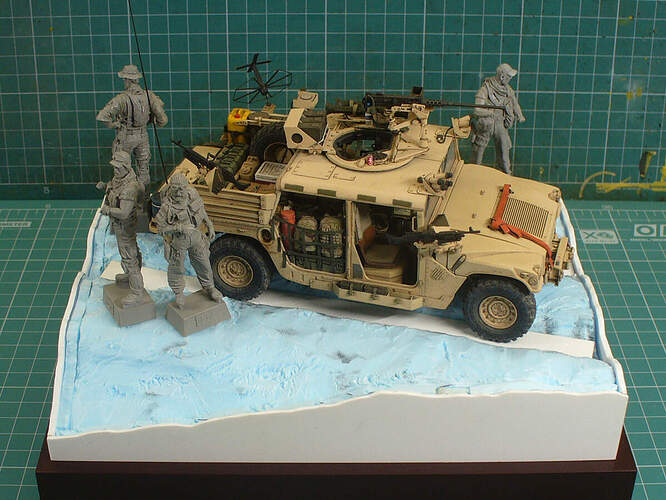 @Maki I’ll be watching this post. As I’m working in something similar I’ll use your posts as reference.

After a while, here’s an update. The Live Resin M4s: 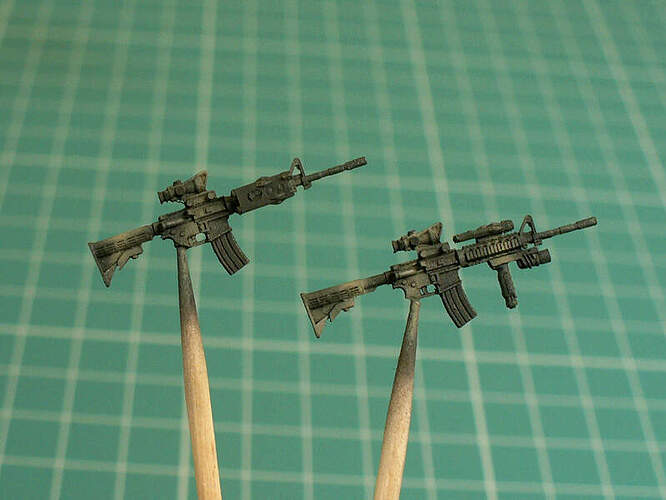 and the first figure done: 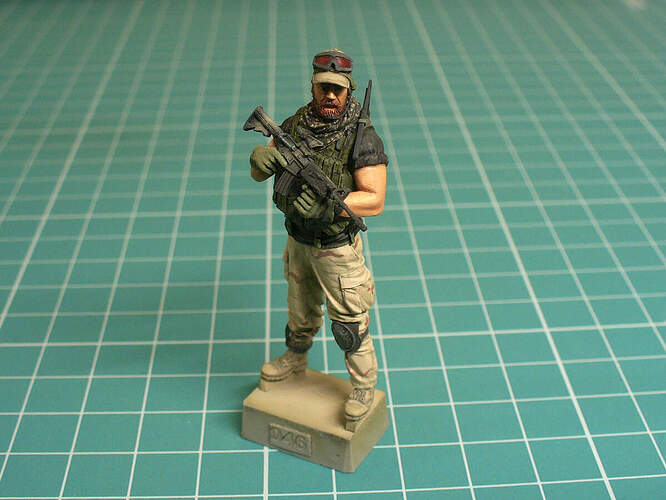 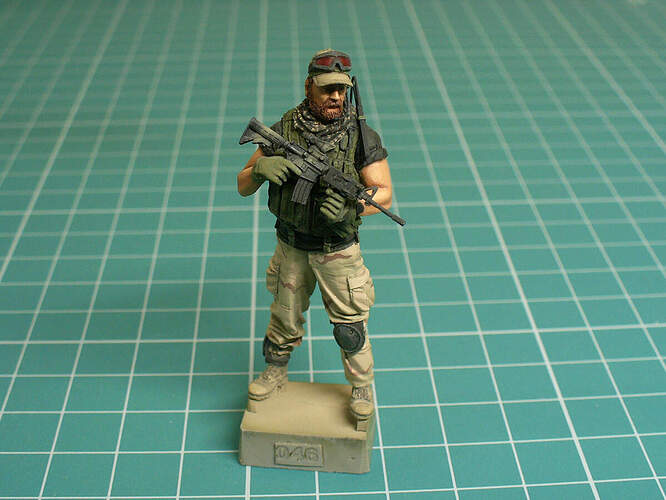 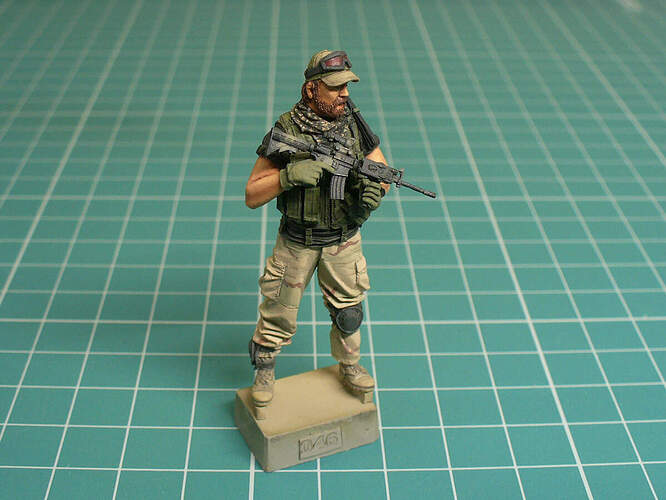 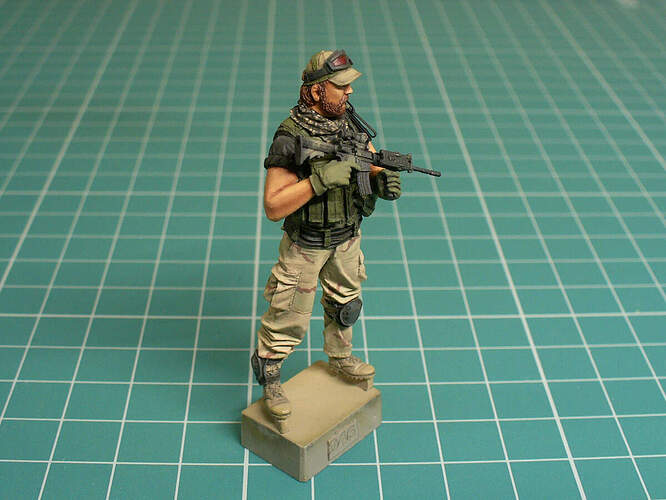 I have to ask what colors/paints did you use for the figures 3 tone desert pants? I’m trying to paint some figures myself but i can’t figure out the paint matches for the life of me

Chris, I painted with Humbrols. Still my favorite brand for brushpainting.

Thanks maki…awesome work by the way

The second figure… I still have to add the weapon sling and think about the radio antenna: 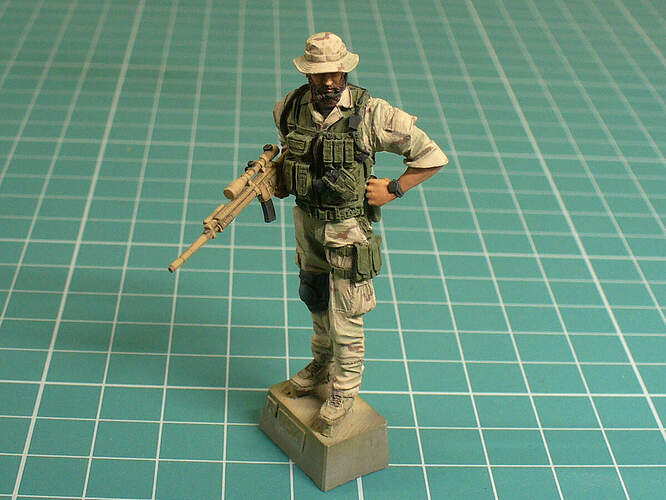 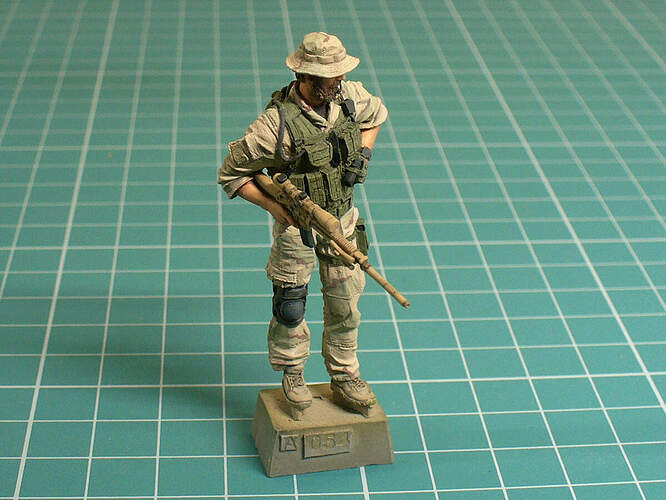 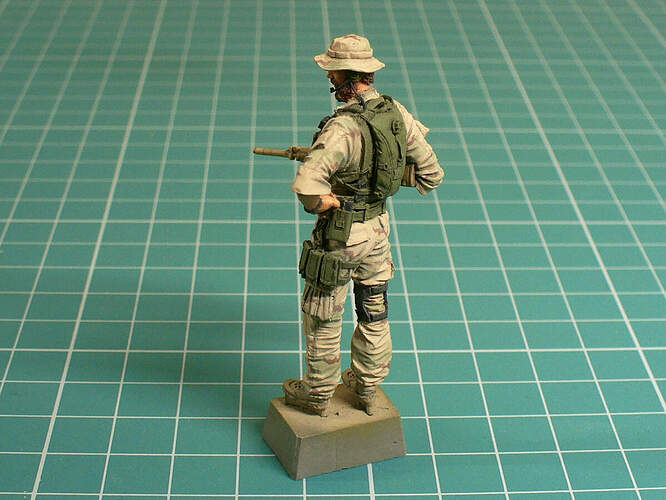 Very nice! As for antenna, a body wire is the most likely. You can use the thinnest fuse wire you can find and zig zag it across the back underneath the CamelBak.

Thanks Rob. Were the body wires used in the 2001-2002? Most of the photos I’ve seen from SF in that period show whip antennas, either tied or strapped to the shoulder.

Now THAT is a good question. In '02 we had the little stubbies on the hand held. I did not wear a body wire until '07. I’ll ask some commo geek friends if they were much in use back then. My feeling is yes, depending upon which radio was being used.

I don’ think you need to ad some antenna, the figure is not warring a radio for long distance.
If the man just waring a Handheld and some equipment for shortrange communication with the squad a antenna for long distance will be some overkill. 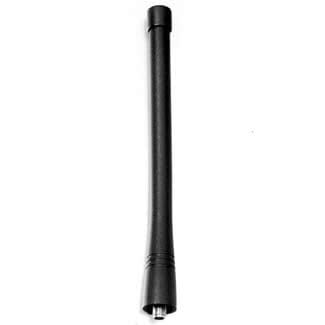 I would think a marksman/sniper would not wear a long whip antenna, so I might go with a stubby.

Jan, thanks. Hmm… this is a good point, although I thought all radios have to have some sort of antenna, even for short range comms?

Exactly that one. And even a team of SF has to maintain longer range comms with the team house, or even the AOB (Battalion level, usually not co-located) The body wire doesn’t necessarily give longer range - I had trouble in Iraq reaching about twenty klicks, and over very flat terrain in the Jazeera desert. For longer ranges I believe we used the PSC-5 with the SATCOM antenna. Not really my purview though. If it didn’t have a trigger or a detonator on it then it wasn’t really in my wheelhouse.

Ah, and for a sling on the M4 I do know that three point sling was very popular then. I made them for the whole team from components I bought at REI. Single points were also somewhat popular. It seems the basic two point sling wasn’t “cool” enough back then. Of course everything is cyclic. The two point with a quick release lengthener is now the shiznit.

Simply amazing work on painting those figures. Not to mention the vehicle. You know your airbrush and paint brushes.

Thanks for the feedback guys.
Here’s a closeup of the next figure in progress: 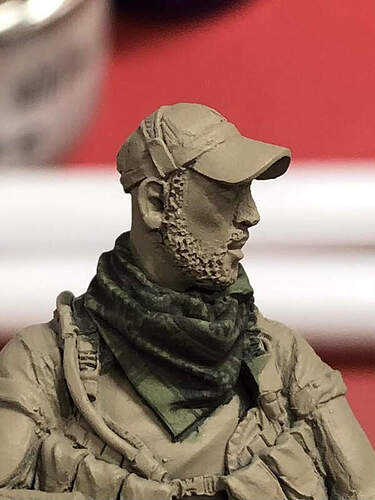 And another one finished… well, almost. Sling and antenna to do. 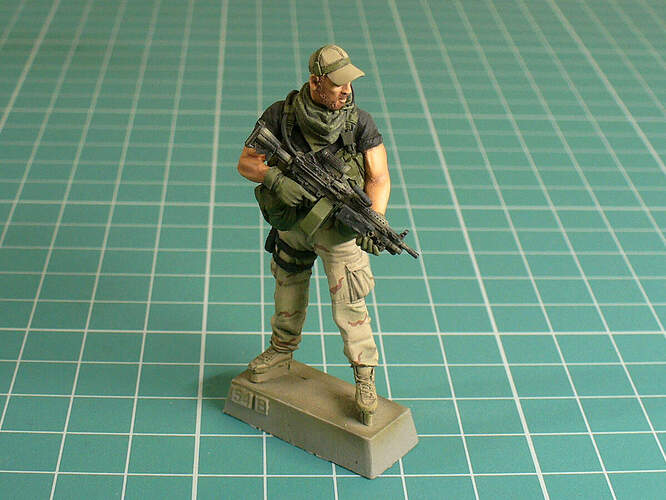 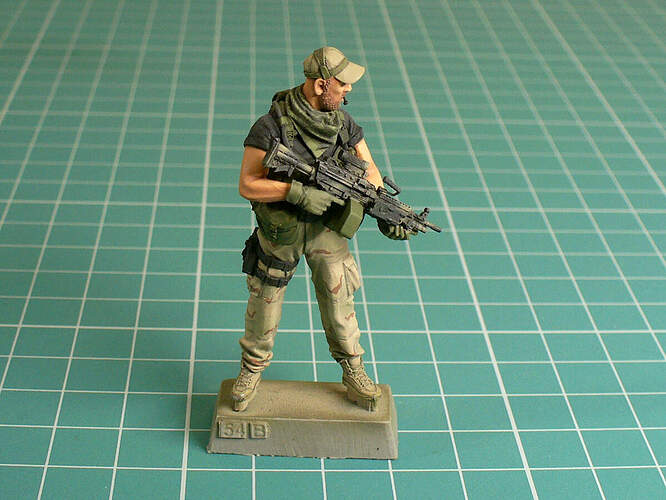 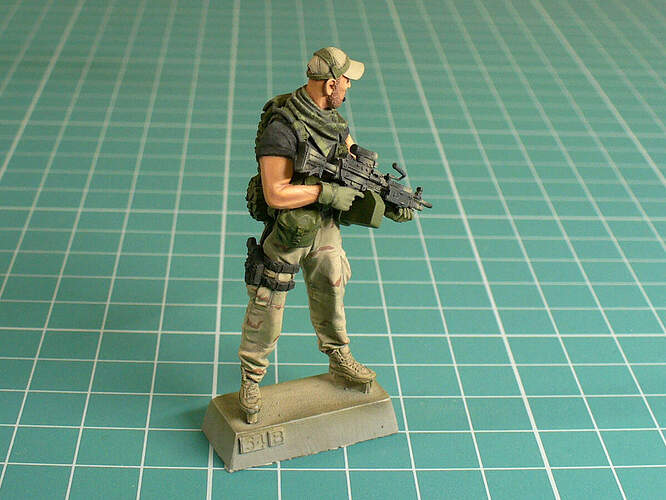 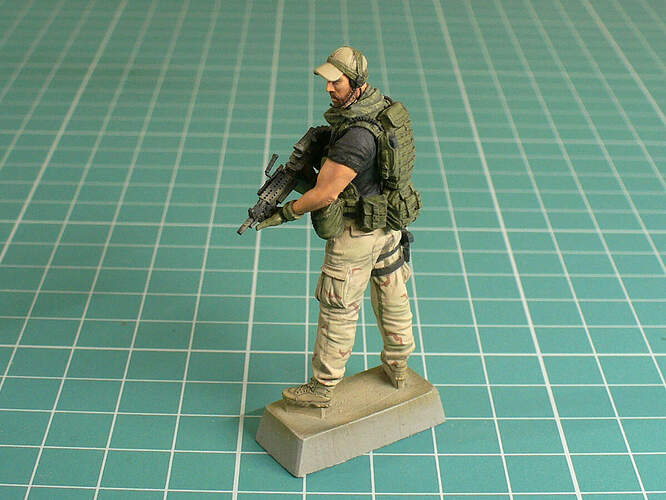