A head to head comparison of Godhand vs. Zoukei – Mura

Decades ago, Xuron “invented” the sprue cutter. A neat little nipper used to clip styrene parts off the sprue without tearing great gashes in them. Gone were the days of cutting parts with a #11 blade, hoping to get them off in one piece. A simple clean up with a sanding stick removed the attachment point.
Then Xuron re-invented the sprue cutter, the model 2175ET, ($17) making them “Professional”, larger for some reason, wider, and with about as much finesse as a Cat D9 in a rose garden. People began looking elsewhere. Everyone seemed to settle upon the Tamiya 74123 sharp pointed side cutter ($30) as the preferred tool for people in the know. This little nipper was smaller, more comfortable, and cut cleaner than the Xuron. There was peace in the kingdom. 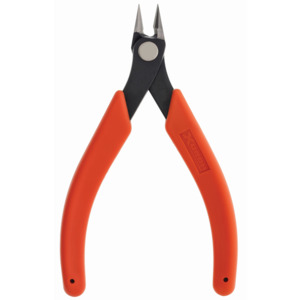 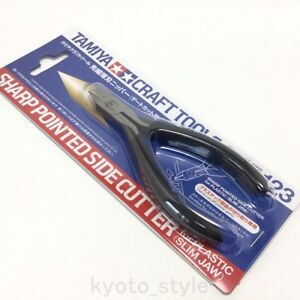 Then a couple of years ago, a renegade from Japan burst on the scene with wild claims – “sprue cuts with no clean up!” and a blasphemous name – Godhand. At a righteous price (originally $70, now $58) many questioned the SPN-120 cutter’s right to exist, let alone its claim of samurai clean cuts. There are scores of reviews on these cutters out there, and most defend the price, calling them the best sprue cutters in the world. I won’t re-review them here, but suffice to say I have a pair, and if you hold them correctly, YES, they do cut pieces off the sprue with no clean up required. 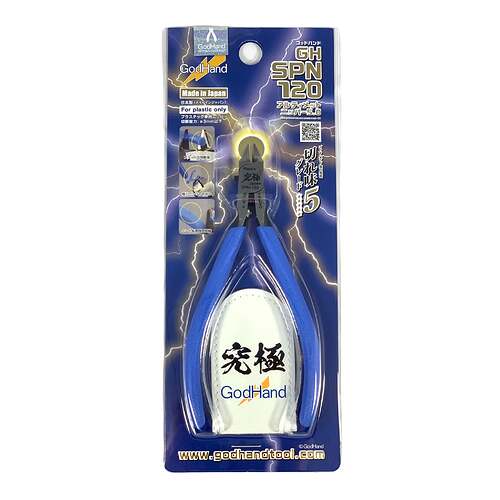 So, while my Xurons sit in a drawer and my Tamiyas are reserved for monster sprue gates, I’ve been happily cutting away with my Godhand sprue cutters. They are unique in that they are 1 bladed nippers. There is an edge on only one jaw, which closes against the flat surface of the opposing jaw. They are very sharp and very clean cutting. However, the flat jaw is about 3 times thicker than the cutting jaw, making it tough to wiggle into tight sprue / part spaces to make the cut. With models having exponentially more and smaller parts, I have been encountering this problem more often lately.
However for years, beyond the lit studio, like a Jedi in the shadows, I had heard of, and sometimes glimpsed, another. A legendary pair of nippers originally designed in Japan in the 70’s and then OOP. Re-introduced some years ago but not widely available. The Zoukei – Mura Pro – Zetsu Series ($40). These nippers can be found for sale with a Google search and are available from BNA Modelworld in Australia, among other places. Here in the States, I chanced upon them at Michigan Toy Soldier, so I decided to see what is so special about these nippers and how they stacked up to the Godhands. This should be the ultimate match up. 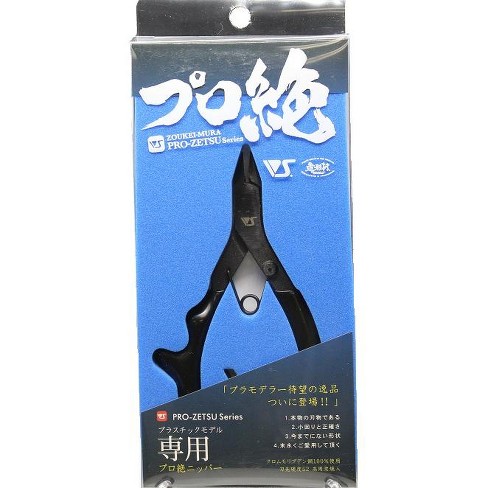 To start, both of these nippers are almost identical in size. The Godhand are a little wider, the Zoukei a little taller. Both fit comfortably and neatly in the palm of the average hand. However the Zoukei have ergonomic finger stays on the right hand handle, making handling and positioning of the Zoukei nippers much easier and steadier than the Godhand. Both are good to work with, but the control and comfort round goes to the Zoukei – Muras. 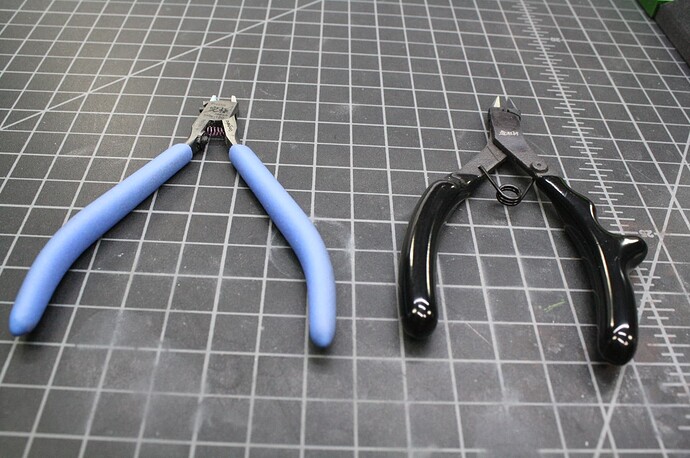 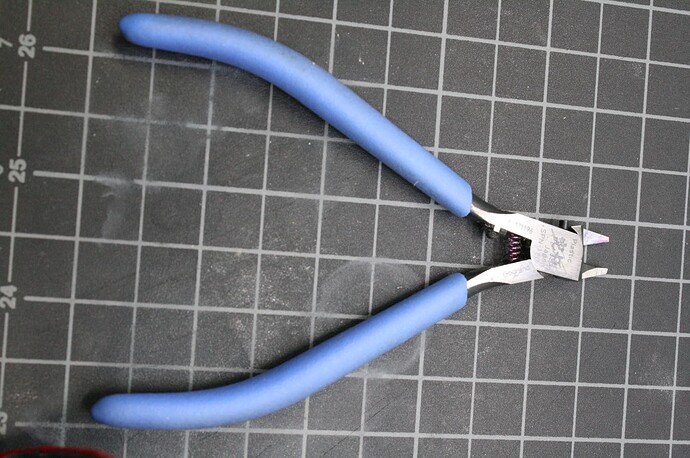 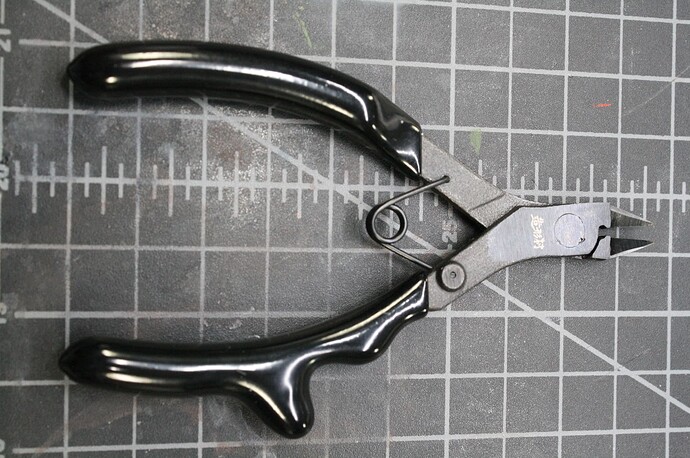 The blades on these are completely different. The Godhand feature one blade short flat pointed cutters while the Zoukei – Mura have 2 blade longer sharp pointed cutters. 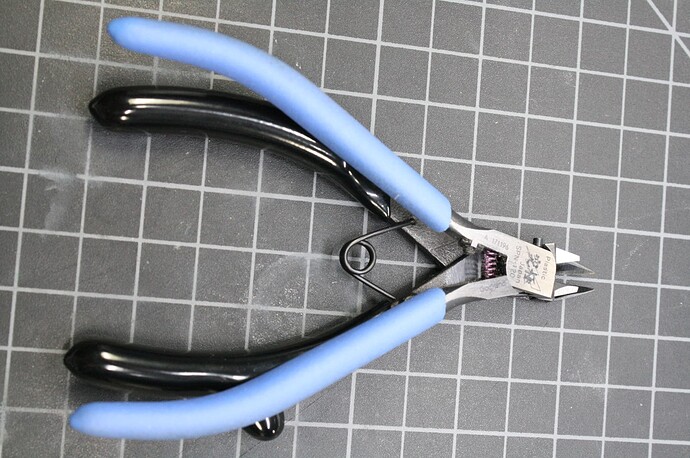 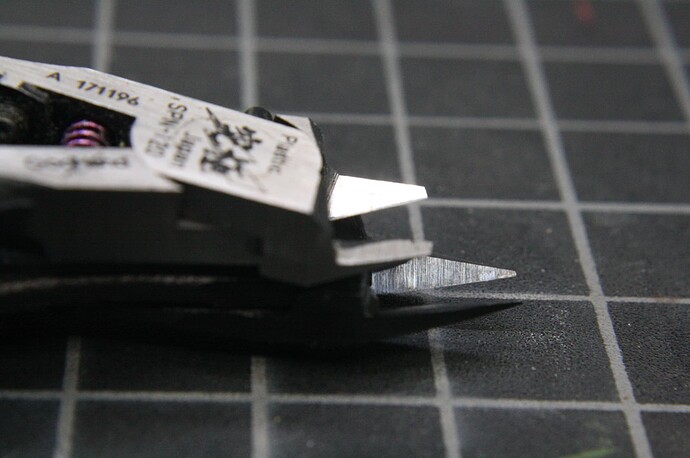 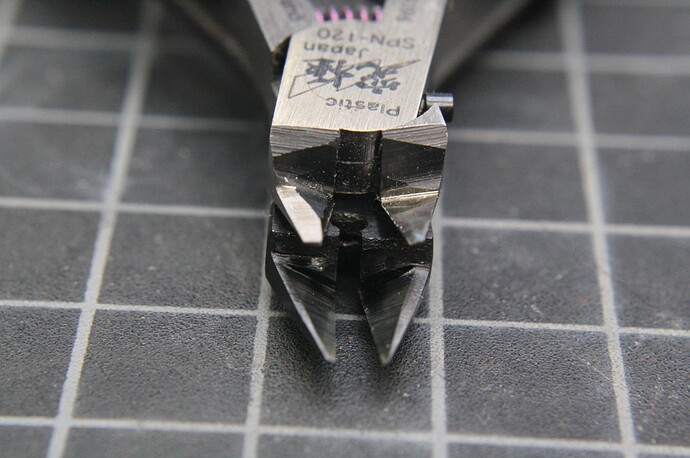 I’m not sure if it’s fair to test almost 2 year old Godhand against brand new Zoukei, but I wasn’t going to buy brand new Godhands for this competition! Now to the cutting tests. I currently have the new Gecko Daimler armored car on my bench, so I made a few simple identical cuts with both nippers. In all the results photos, Godhands cut is on the left, Zoukeis cut is on the right. Both nippers cut close, but the Zoukeis feel sharper, perhaps because of their double bladed design. Indeed, the Zoukeis seem to have cut cleaner or identical to the Godhands. In addition, the Zoukeis longer, pointier, thinner blades reached into tighter spaces than the Godhand, making them very versatile. The Godhand provide a squarer cut, but I would shy away from saying a better cut. Look at the photos and judge for yourself.
I wasn’t really trying, so only on the turret floor did I get a perfect cut with either of them, but you can see how precise the cuts are and the difference in them. 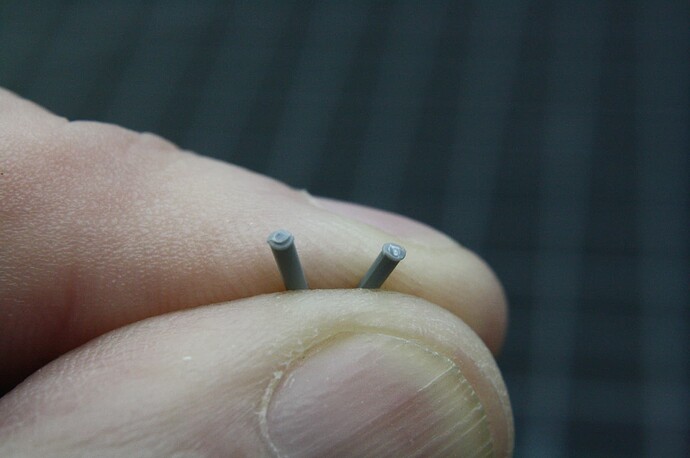 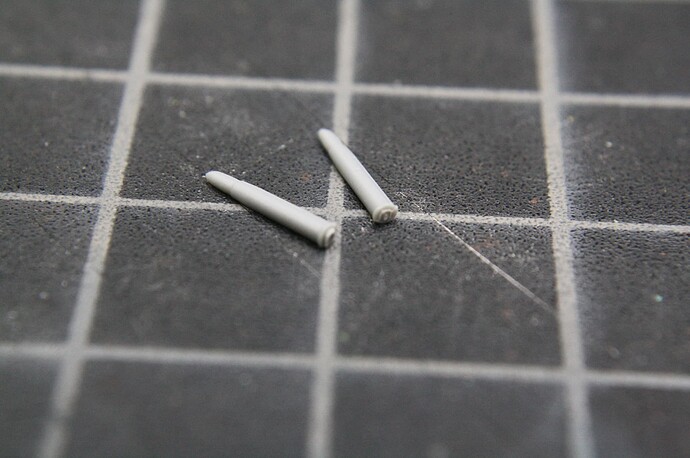 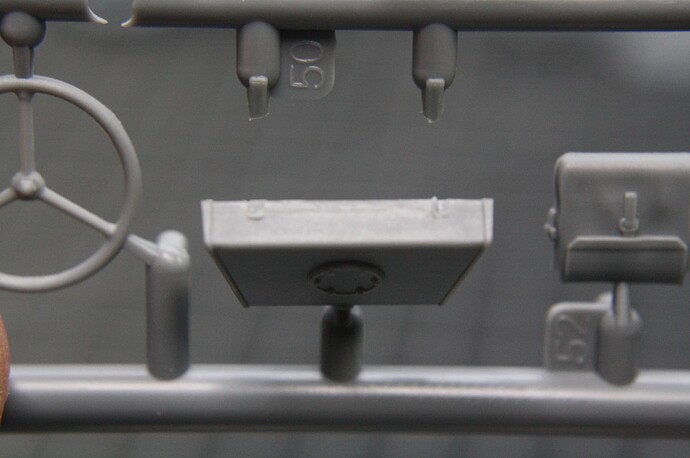 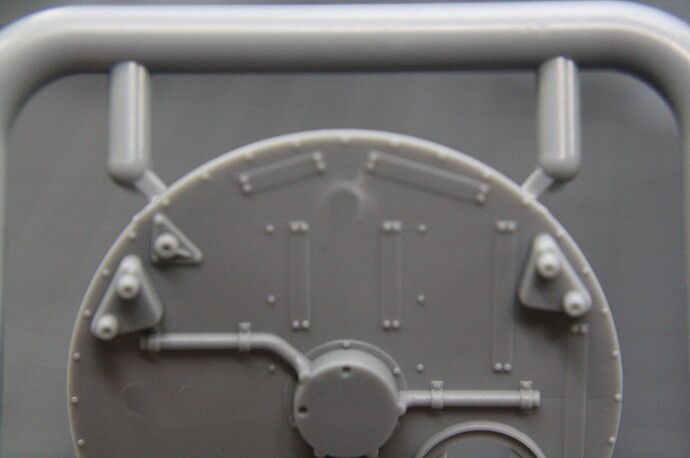 I thought the Godhand were the be all and end all of sprue cutters, and I am very happy with them, but the Zoukei – Mura cutters have really opened my eyes. I like the Zoukeis very much. Considering the Zoukeis ergonomics, feel, cut quality, and blade reach I will be using them as my first line sprue cutters from now on.

Taking into consideration the Zoukei – Mura’s $18 price difference, the quality of cut, and handling of the tool, it is this reviewer’s conclusion that the Zoukei – Mura Pro – Zetsu sprue cutter beats the Godhand SPN – 120 sprue cutter in a head to head match up. The Zoukei – Mura are also packaged with a spare return spring, which tells me that they are built for the long haul. The legend is true, there is another…

Nice review Matt. So now I have to shell out more $$ for a Zoukei cutter for those tight spaces. Thanks pfor pointing out a problem I didn’t know I had.

Thanks DV, they really are a great tool.

Thanks for the review! Very interesting, I am currently using a pair of Wave single edge nippers and work nicely, it is good to have an alternative for replacement when needed.

Excellent info in the review. I was looking to get another set of the Godhand nippers after I broke the very tip of one of the blades. Now I think I will get a set of the Zoukei clippers instead.

Now I must nip another set of nippers.

I’ve been curious how nippers like these preform on small delicate parts? I’ve been using a razor saw to remove all parts. This is for two reasons my cheap crappy nippers break small parts, and leave small scars on big parts.

Mead, this is a very valid question and one that I didn’t really answer in the review, so I went back to the bench for round two. I searched through the kit and found the smallest, most delicate part in the kit, this tiny linkage held by 2 attachment points. 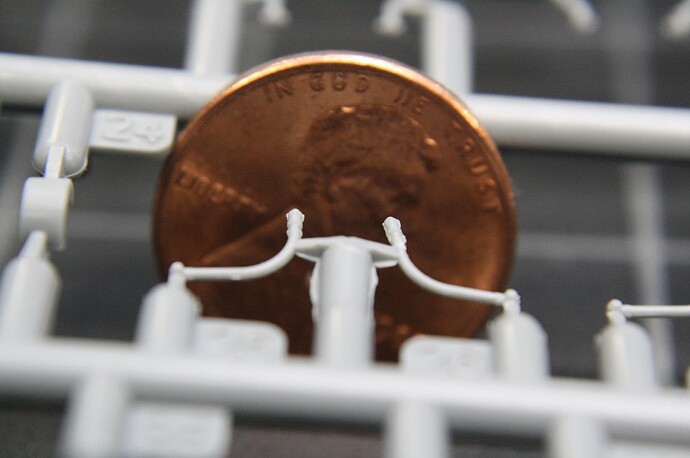 I cut the part off with the Zoukei - Mura nippers. They handled this delicate maneuver with ease. 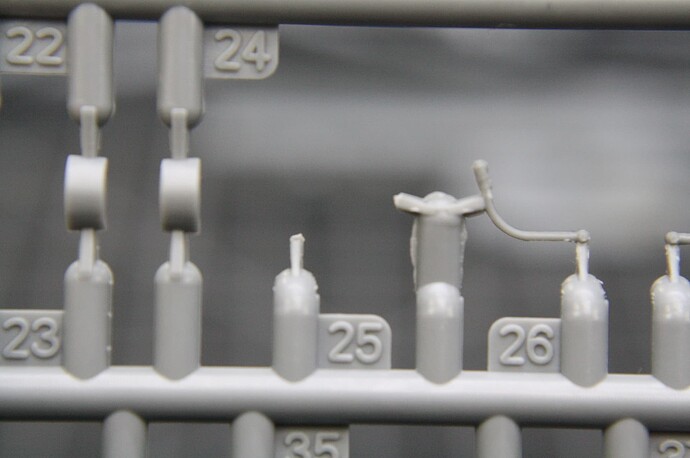 No parts breakage, and here is the part, with no clean up done! These nippers are so sharp this part is ready to go, no stubs to sand. 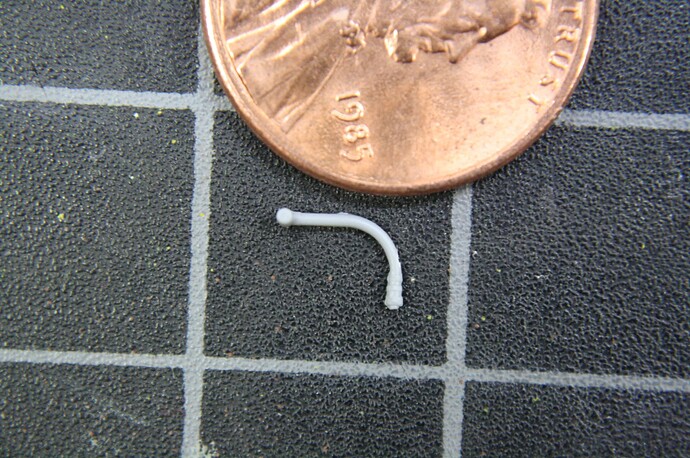 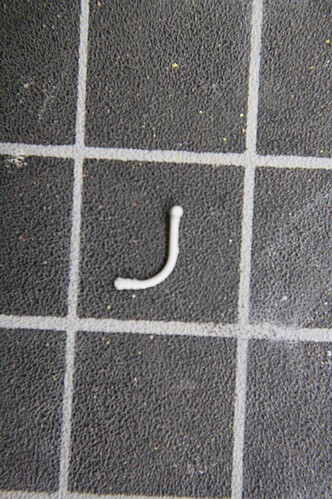 I used the penny to illustrate how tiny this part is - these photos were taken with a +10 diopter macro lens. The Zoukei nippers handle delicate parts quickly and efficiently.
Another fact about the Zoukei nippers I dug up - It’s made out of Chromium Molybdenum Steel with a Rockwell hardness of 52 for the blade and 35 for the handle. 52 Rockwell hardness is Military-Grade knife territory. These nippers will last forever and STAY razor sharp for a lifetime.
The more I use them the more I like them. Sorry Godhand.

Great! Impressive cut on delicate parts! Might have to order these when I get a chance

“Shiny, shiny, shiny” I am a sucker for tools. I know in the back of my head that he who dies with the best tools goes to heaven. They are currently out of stock and will have replacements in about a month. So i ordered anyway “Shiny, shiny, shiny” I also want to try ZM’s ceramic knife to see if it is better than an x-acto knife.