Well over the last two weeks I’ve been building this beauty, Takom’s 1/35 T-14 Armata offering. This kit was a straightforward build and pretty quick to assemble. The only trouble i had with it was the track assembly as it’s a two piece approach to make one link rather then zvezda one piece/ sections of track. Besides that the kit was easy to assemble and went together with no issues. It’s been awhile since I’ve had a lot give me zero heart ache.

My Armata was painted with AK interactive 3rd gen primer but ultimately refinished with a Tamiya rattle can primer after some technical difficulties/ user inexperience with 3rd gen primer. After that i used ammo Mig Protective Green NC1200 as the primary coat and then for highlights i added white and reapplied across the panels. I am really pleased with the outcome, after painting i did a wash/filter of brown followed by some targeted burnt umber pin washes as well as an ivory black wash for the track and wheels. Following that i used some white and Payne’s grey oil paints for a a streaking effect to give it a Post field / training time look. 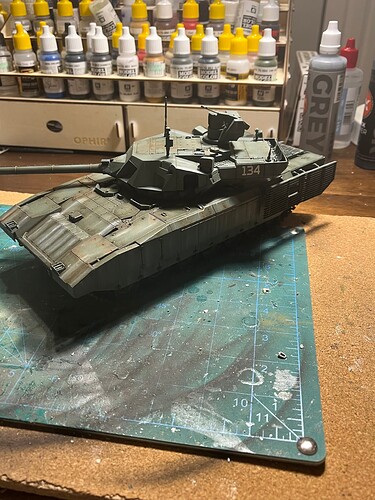 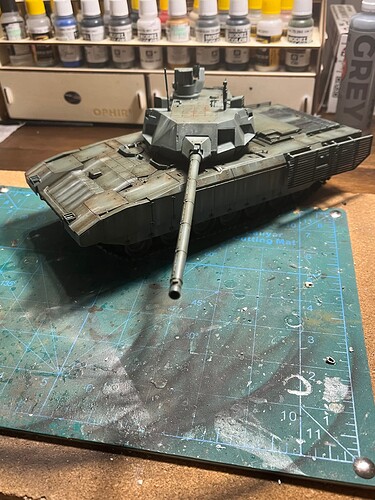 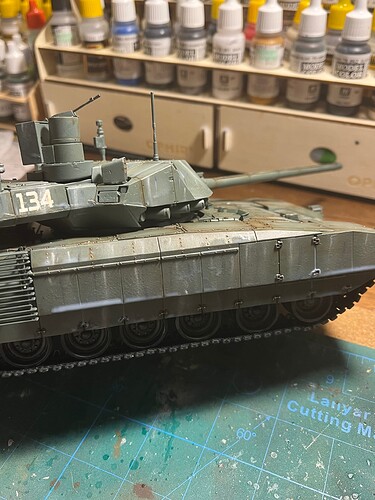 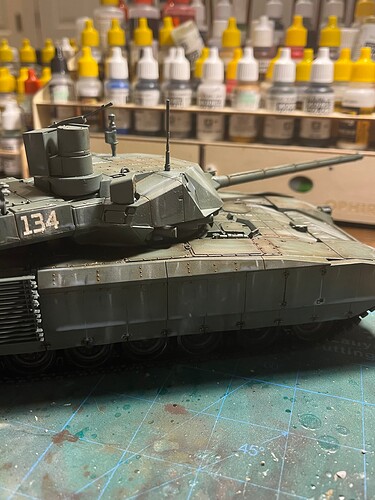 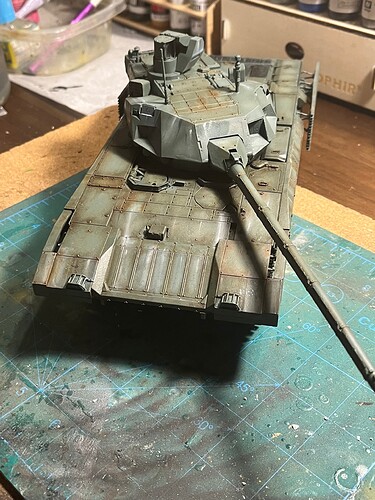 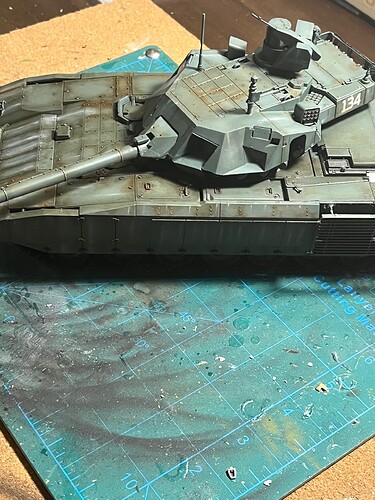 Like the finish, but shouldn’t it be ‘Parade-Ground’ bull-shined? As there only a couple & it will never see combat?

@jon_a_its thank you and yeah tracking there’s only 20 or so and it’ll more then likely never see combat. Like i stated in my write up , wanted to give it a post training/ field look. Even in test firings and range time vehicles get dirty. Just having fun with it since the kit came with what if markings and camo concepts.

Why do you guys think it won’t see combat? I think Russia is going to be needing new tanks and the current generation seems to be quite vulnerable. Very nice model.

Why do you guys think it won’t see combat?

Too expensive and complicated.
Ken

@Invader so from my understanding it is to expensive to mass produce. The economic situation to modernize the Russian armed forces isn’t set so rather then mass produce this new tank they can spend the money to upgrade T-72 and make them , i believe the T-72B3. This brings the aging T-72 on par with the modern T-90 essentially making it the same. I believe it was for every 1 Armata built you could upgrade 3-5 T-72s.
Russia is running out of tanks from my understanding and has been digging into its reserve stock pile of T-62M’s to kit out units going to the front. The other issue is that the T-72s they are recovering and sending back to the factory to be repaired are having components taken out by soldiers and sold for booze money. Factories then responded to this and stated they wouldn’t repair anymore vehicles because of this discipline problem.

So, its all going swimmingly well then…

@Khouli yes you could say that

I also wonder if the T-14 couldn’t hack it in a true combat environment. A black eye for Russian export sales and tank manufacturing. Too expensive, too complicated and too embarrassing if it doesn’t work.
All that aside, That’s a good looking Armata you have there Greg !
Thanks for sharing !

@Ivanhoe6 thank you, i believe i did see an article about the T-14 export variant being a possibility in the next few years. It’d be interesting to see if that happens but a bit odd to make a tank only to export it.

It seems like quite a bit of Russian equipment isn’t hacking it in a real combat environment these days.

Hear they have all sorts of problems with the systems not working. (works fine in Red Square, but…) And, of late, can’t get a lot of the western electronics and such they use in them. I read India had been looking at buying some but lost interest when it looked like they wouldnt be delivered anytime in the next couple decades.

@loncray yeah, it appears that Russian equipment isn’t what it’s all cracked up to be.

yeah, it appears that Russian equipment isn’t what it’s all cracked up to be.

I’ve been watching a lot of YouTube, maybe too much, about the Ukrainian War. And, a lot of it (I think) is BS and half truths. But one story was about all the tanks the Russians have in storage, 1000’s!!! Almost all would have to totally re-furbished taking months to do so. Could we see T-55’s this Winter?
A while back I built Meng’s “Terminator”. Trying to remember all the historical notes from the instructions.
I think it was built in response to Urban Warfare from lessons learned in the 2 Chechen conflicts. I think it was Kazakhstan that was the only country to buy any.
I sure hope that things get straightened there soon !

@Ivanhoe6 i know they started reactivating some T-62M variants. I wanna say i read an article last year of how a reservist section took 20 tanks and upgraded them for their 2 week summer training that they do. I think we’ll see T-62’s before the T-55 comes back but what no one’s talking about is all the BTRs they’ve lost. Do they have and i would assume they would have a ton of those in storage as well? Could we see reserve units rolling around in BTR-60PA ?

I was kind of kidding about the T-55’s. But the fact that they have 1000’s in storage makes me think anything is possible. The YouTube story also stated that most of the armor in storage is rusted hulks. Monies allotted for maintenance was siphoned off into Senior Staffs’ pockets. Once again, this info was on YouTube so no idea how true this is.
Joe Stalin once said, “quantity is it’s own quality”. And with Communism “everybody” had a job. Grinding out armor gave the steel workers jobs, which gave the miners jobs. Exporting weapons at bargain prices to Third World countries gave the USSR hard currency. Quite the viscous cycle!

Talk of the T-55’s makes me think I’ve got to get my rear in gear and get going on my T-55 for our club’s (SWAMP) group build due at the end of the month.

@Ivanhoe6 ive heard those stories as well. Fields that have a battalions worth of tanks just sitting there waiting to be used. To my understanding they turn the engines on once a month or so. The quality in quantity is a true statement. There was a strategy during the Cold War to use vehicles like the T-62 in mass formations while then spreading out newer and better equipment to pick off allied vehicles after they’ve expended their ammunition on the older equipment.