Can you tell us what the words on the cowling mean?

I will …over a beer…

It means ‘Prost’ in German or ‘Cheers’ in English…

It can also mean ‘Good luck’ as noroc literally means luck. I have a friend in Italy whose wife is Romanian… she says this when we have a drink together.

Torsten: I don’t know how much of the post did you translate but I remember the conclusion was that, considering all other markings were painted over, most likely the ones on the underside of the wings must have been too. Good thing about it is you can do it by hand, which was exactly how they were covered.
Dragos

Thanks for your comments, Peter and Dragos!

So it’s “Cheers”, that’s quite ironic for throwing bombs after the toast … I haven’t translated the posts in that link yet. First I had a look at the photos of the build and the original. On the decal sheet this guy had, the overpainted german markings were already added to the Michael Crosses. That makes it a lot easier. My decal sheet does not have that. I will cut masks and use the Balkenkreuze of my Ju 87 B kit as patterns. The code on the fuselage I will brush paint. A bit of time consuming extra work but I hope it will pay off. Just have to find a darker Green than RLM 70 Black Green …

Concerning the wing underside, my Stuka will show no overpainted markings in a different colour. Maybe the Romanians had some tins of RLM 65 Light Blue at hand back then…

Hi Torsten,
I have studied all posts in that topic plus a few others (an interesting one here) and aparently 861 was very well documented, somebody found quite a lot of photos with it. Unfortunately he does not want to share them but he swears that 861 had no markings on the underside, actually visible in the available photos. If you want to add any, it’s entirely your choice. Also, you are right with the over paint for the fuselage markings, it was darker than RLM70.
Good luck (noroc) and will let you know if I find any other interesting info, hopefully before you finish it.
Dragos

I guess, you’re right, Dragos. There are no markings visible on the underside. The cross should be somewhere in the circled area … 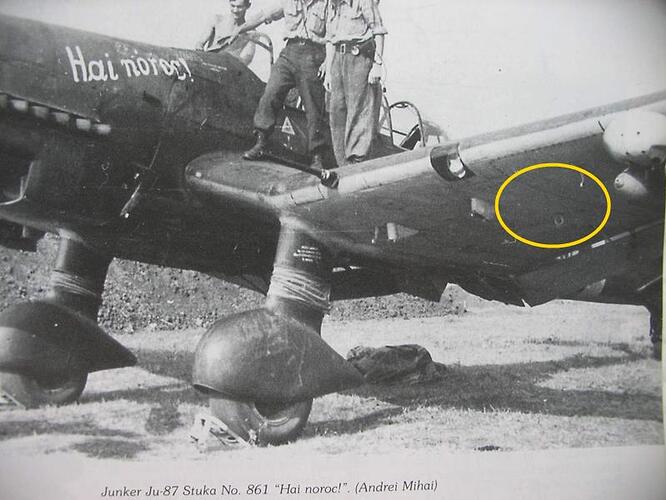 ). On this other Ju 87 the cross is barely visible (yellow arrows). So not all romanian Stukas had them … 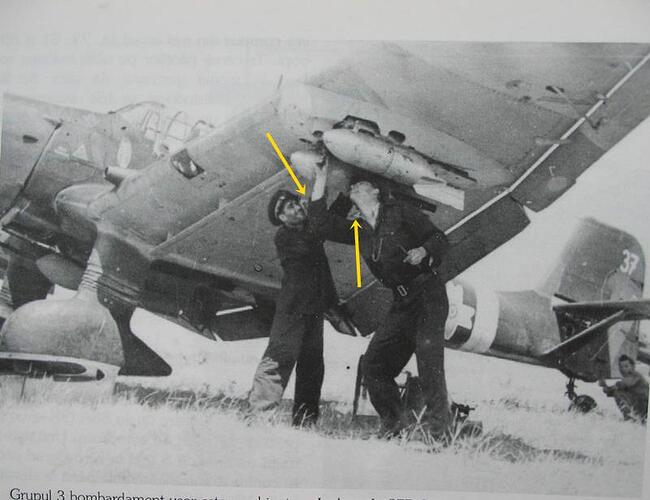 Did airbrush the underside with Revell Aqua No. 49 Light Blue today, which comes close to RLM 65. Not really visible under my bench lamp, but I did it … 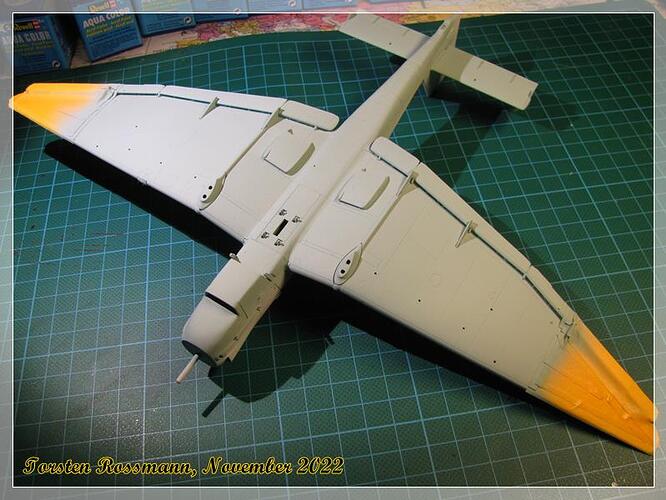 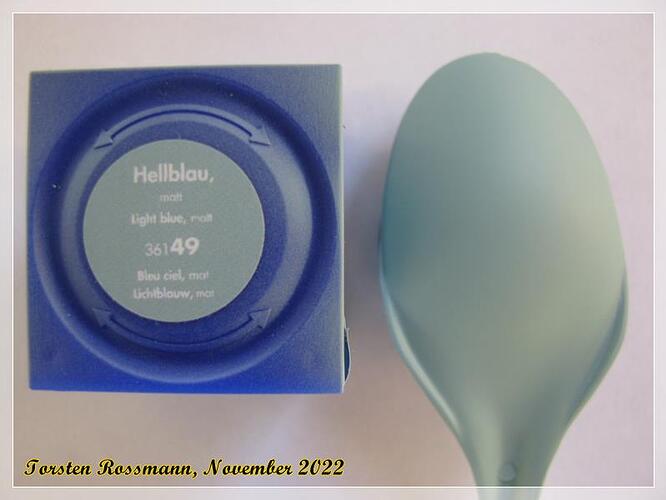 In the next days I have to mask all this before I can carry on painting. Will take me some time …

Looking good Torsten.
I did some more reading and apparently 861 was also missing the dive brakes, being used for level bombing. It was not a consensus so you might be right if you choose to keep them.
Dragos

Thanks Dragos! Yes, I’ll keep the dive brakes on, she looks naked without them …

Another small update from my build. Have spent the last 3 days masking the underside …

Have used Tamiya Tape and Fine Line Gold Tape which is basicly the same as Tamiya Tape but comes in various sizes and with 50 meters on the roll. 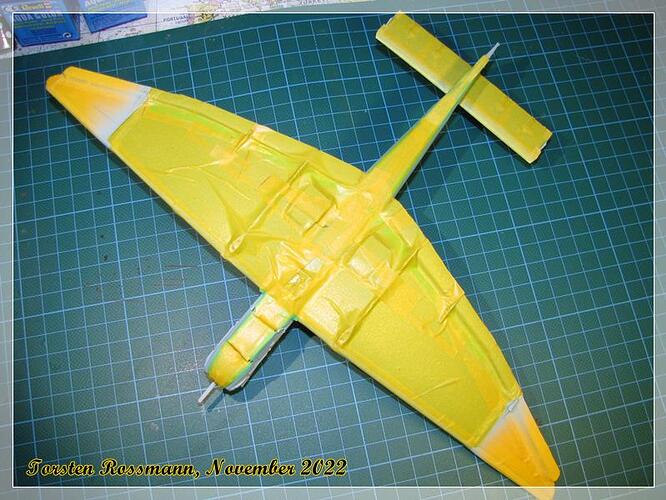 … today I sprayed Dark Green for the overpainted german markings … 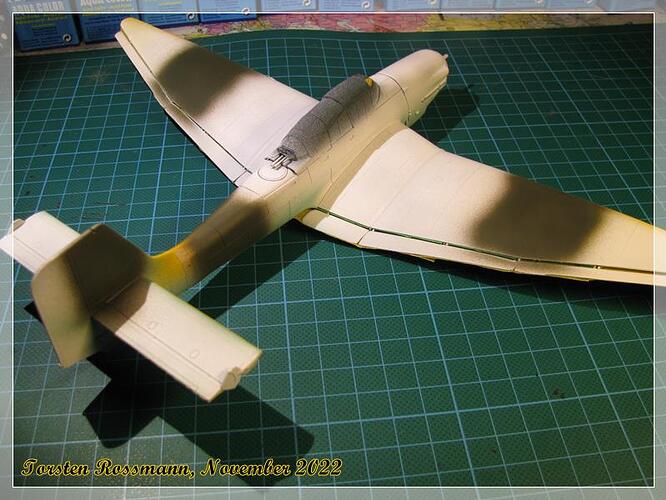 … have used Revell Aqua No. 68 Dark Green which is a different Dark Green than Revell No. 39. So it should be visible in the end … 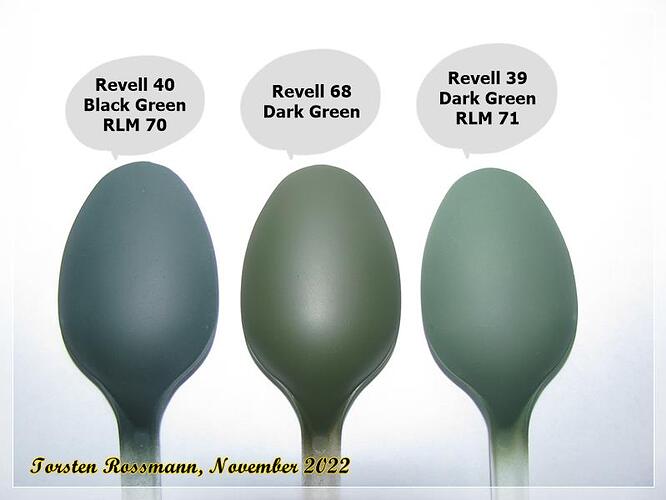 … now I will make masks for the Balkenkreuze and swastika and use the decals from my Ju 87 B kit as a pattern. Will take me again a few days and I don’t know if I’m successful with it but I give it a try. I’ll let you know …

Have a nice weekend!
Torsten

Torsten.
Excellent job on the topside cameo. I’m betting that your pattern for marking will turn out just fine and well worth the effort.
joel

Thanks Joel! Yes, I’m quite happy how this build has turned out so far. Somewhere I read the orginal mould is from 1998. Like others Hasegawa re-releases their kits from time to time.

If masking the underside was

, then cutting masks for the Balkenkreuze was

but it’s done now. The first attempt was rubbish so I threw it away but these 2 came out quite well … 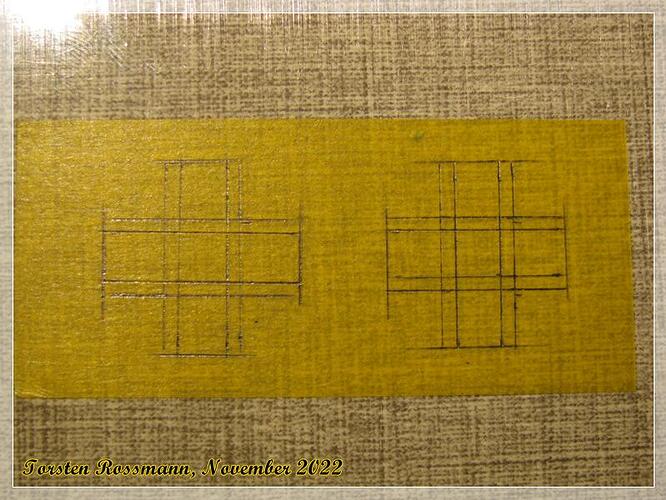 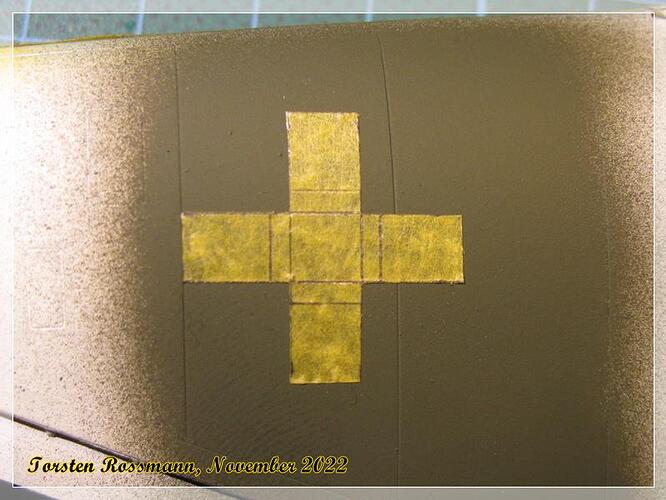 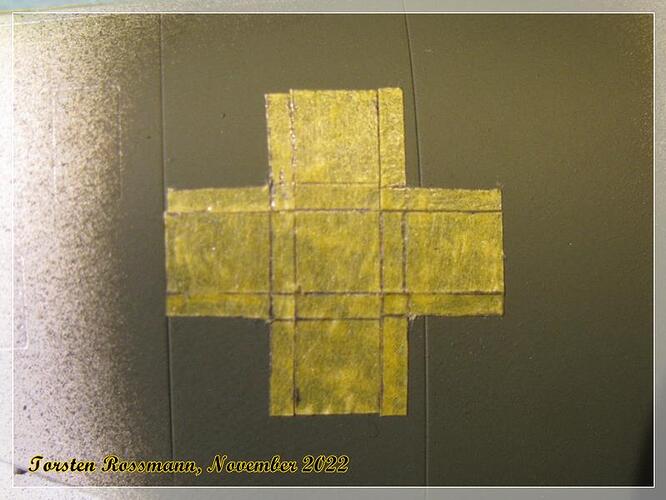 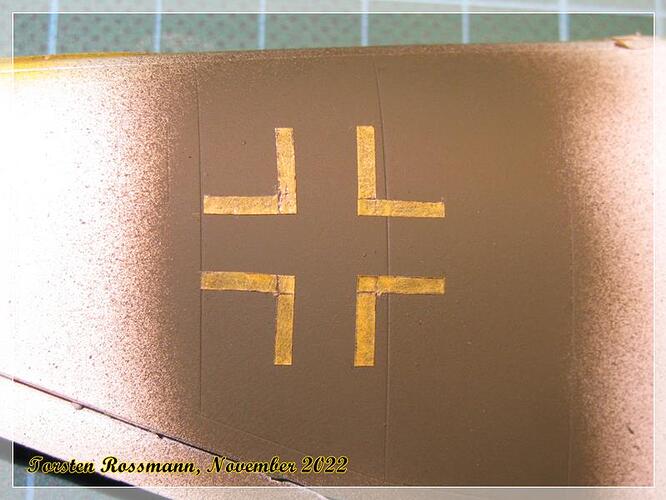 … all Balkenkreuze and the covers for the swastikas are on now … 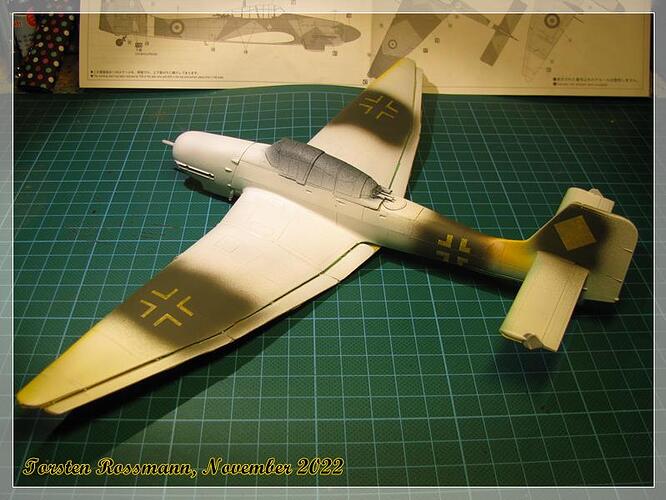 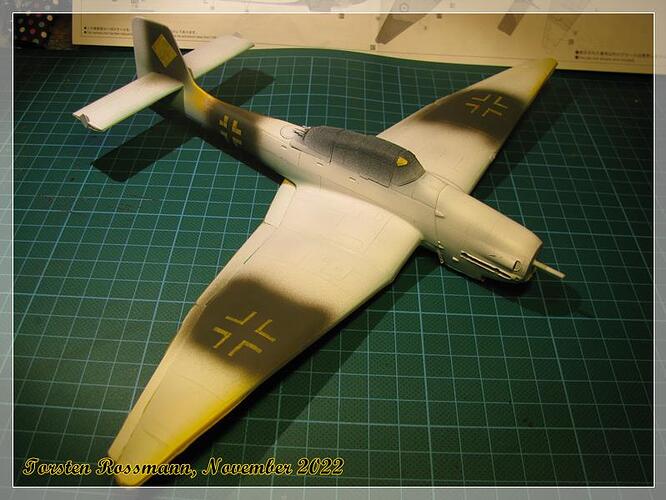 Sure no perfect work but at least I have the correct positions now. Don’t know if the Romanian Crosses fit inside like on the original plane, I will see. Later I have to brush paint the code letters on the fuselage anyway, so some corrections might be neccessary then. Next step will be airbrushing Dark Green RLM 71 all over …

Just a little update, though not much to show this time. In the last days I sprayed Revell 39 Dark Green RLM 71 all over the Ju 87 … 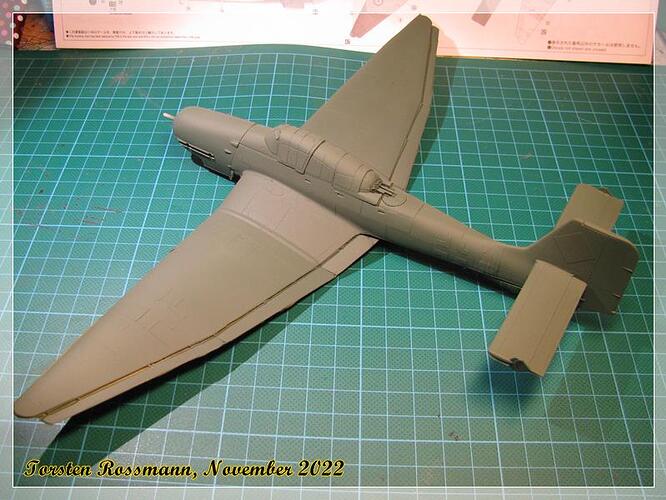 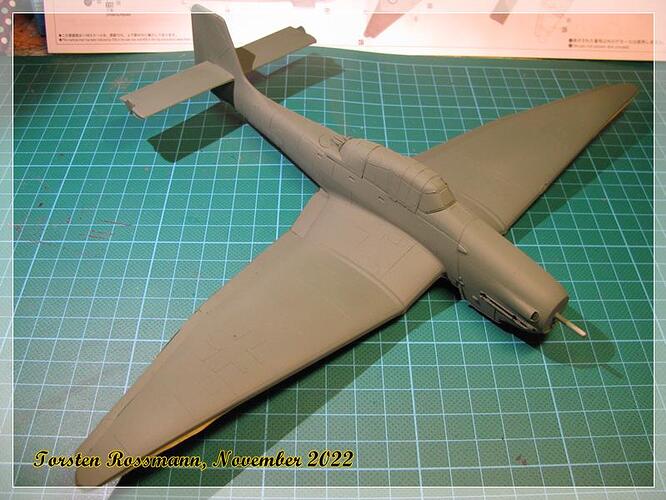 I checked the size of the Michael Crosses and they will fit inside the german markings on the wings but not on the fuselage. But I guess that’s more or less the same as on the original aircraft.
I will leave the paint to dry well now and start masking for Black Green RLM 70 on the weekend. It will be the same masking monster as this one a few years ago … 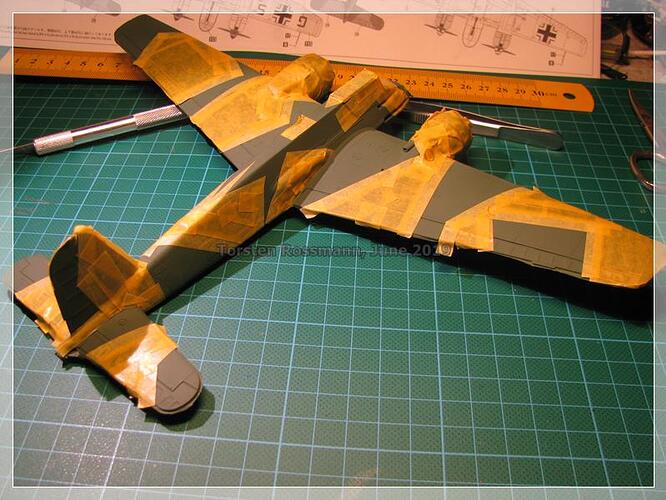 Have a nice weekend, guys!
Torsten

Looking damn fine Torsten!! The Hs129 is just an aggressive-looking aircraft and I do so love how it looks. It looks fit for purpose even if it struggled with underpowered engines for its service career. And the Stuka is simply iconic. I do like the look of the D and G airframes over the B.

Thanks for looking, Chris! Yes, the Hs 129 was underpowered with it’s french engines and needed always fighter escort on its missions but on the other hand you can call it the “grandfather” of the A-10 …

The Ju 87 has to me an all over evil look, the D more than the B, though it looked obsolete right from the beginning with its fixed landing gear.

Just a little progress today but very time consumpting. I have finally finished the outlines of the splinter camo. I hope to have covered the dark green parts until the weekend … 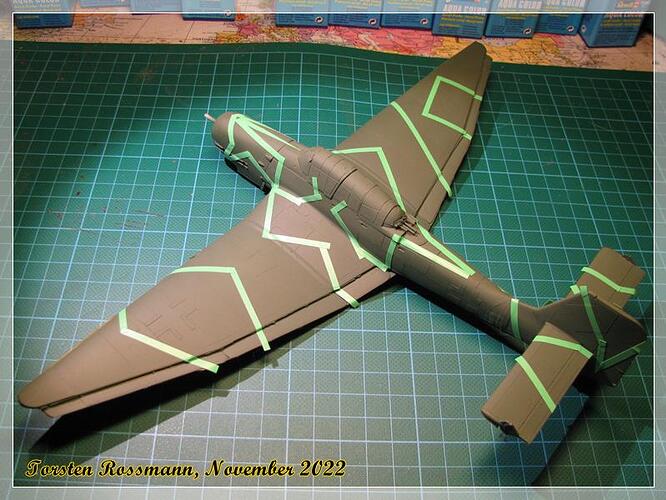 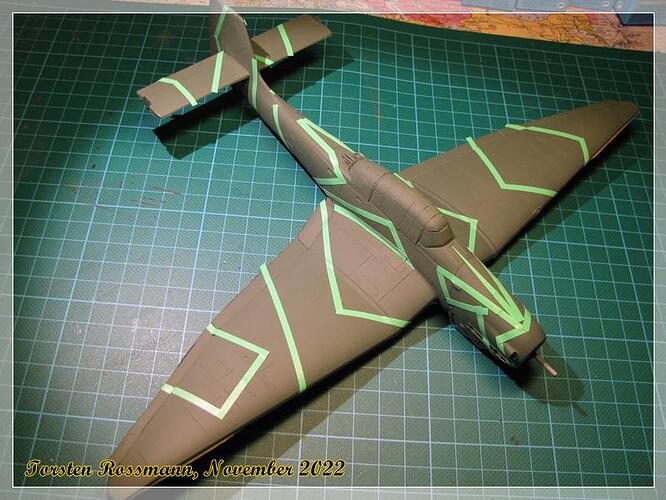 Torsten,
lately you’ve been turning out one aircraft after another at a war time pace.

Looking forward to seeing how the Cameo pattern comes out.

Torsten, amazing work as usual. Been lurking but time to tell you again how much I enjoy your work and appreciate your blog.

Thanks for your most kind comments, Joel and Fred!

Joel, in fact I’m pretty slow this year with only 6 models finished (including this one). My usual output is 8-9 models a year. So at the moment I have more the speed of Germany delivering their Bundeswehr with new equipment …

Fred, I’m happy to hear that you enjoy looking at my work. It also gives me pleasure to work on this blog.

After working more than a week on masking the splinter camo, I have finished it on Saturday … 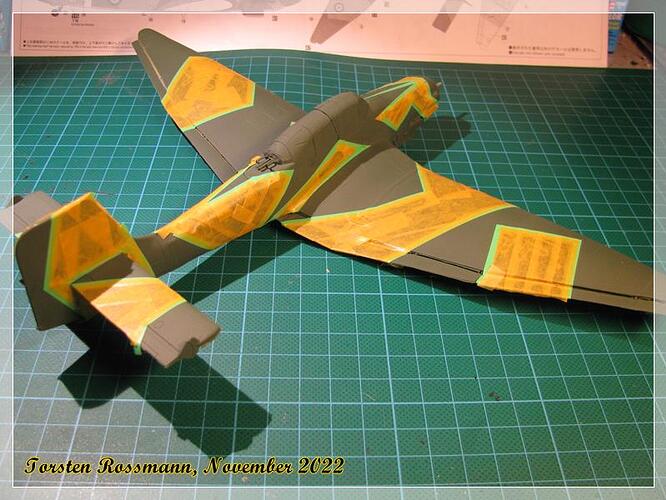 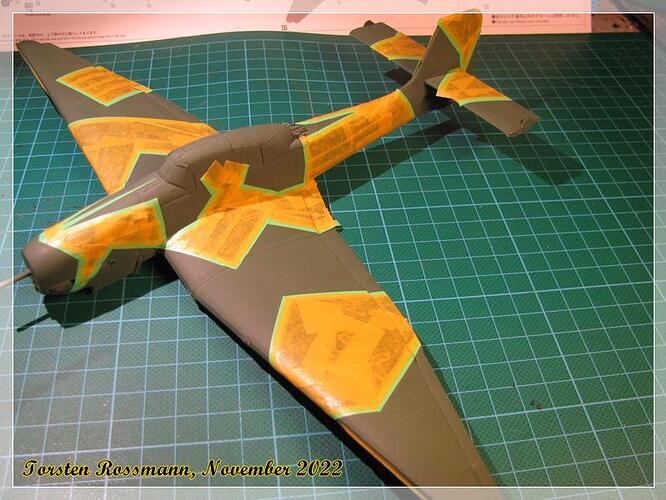 … and fresh from the paint booth this afternoon. RLM 70 Black Green is on … 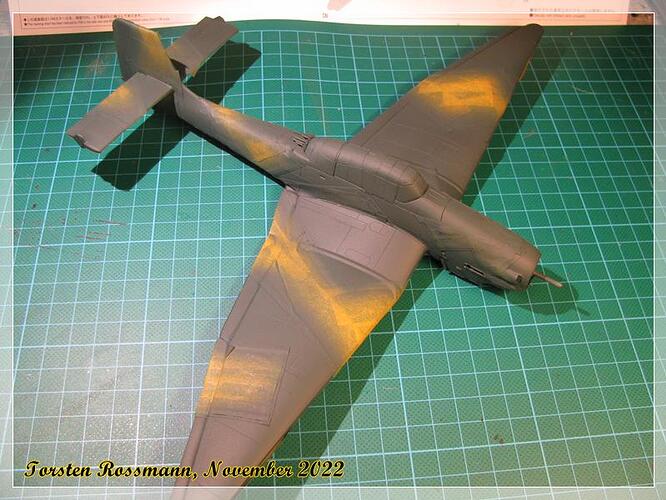 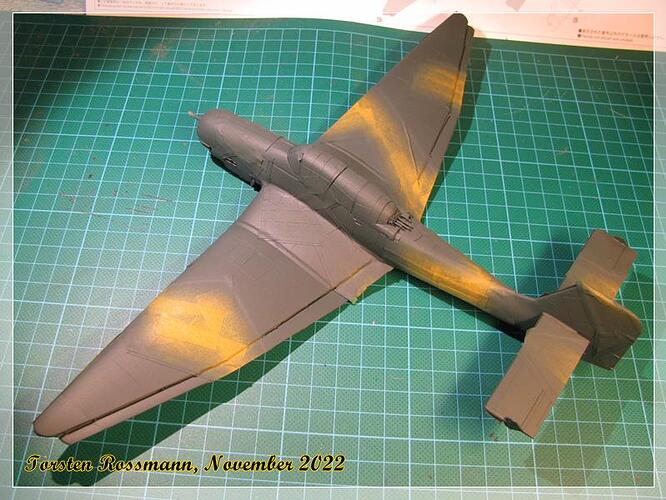 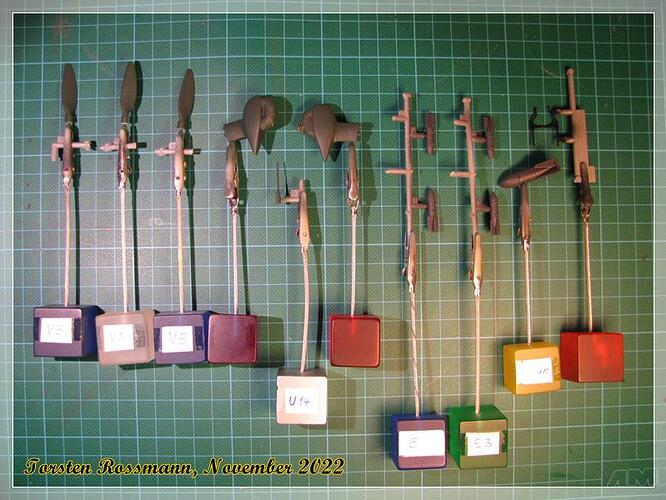 I leave the whole stuff to dry well over night and start to demasked the Stuka tomorrow. There are sure some touch ups to do but the main work is done on this bird now. I’ll let you know how everything comes out, sooner than later. 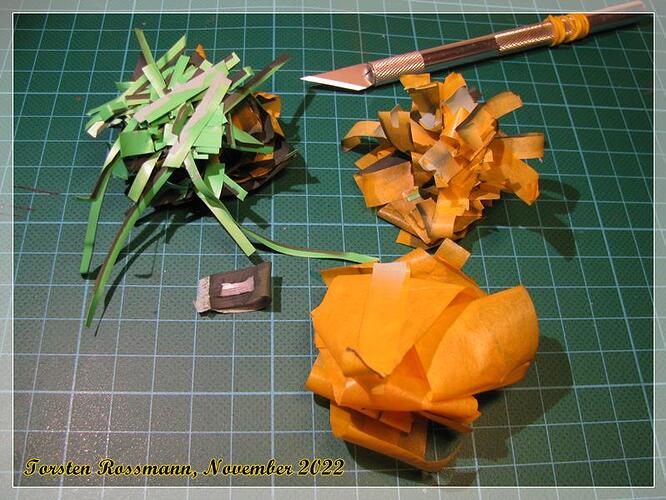 … but the result was worth the pain … 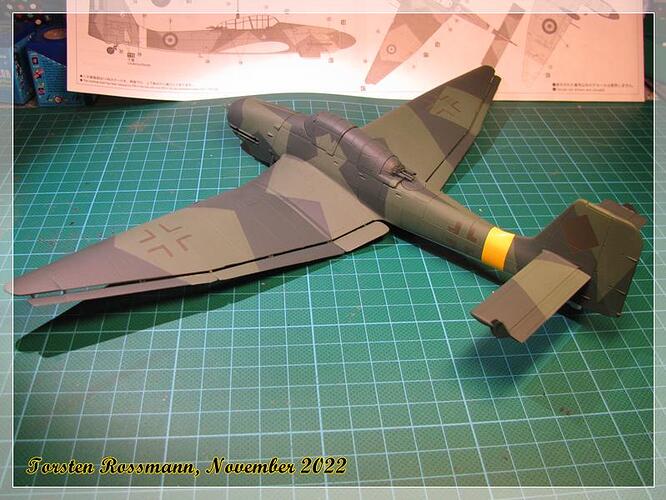 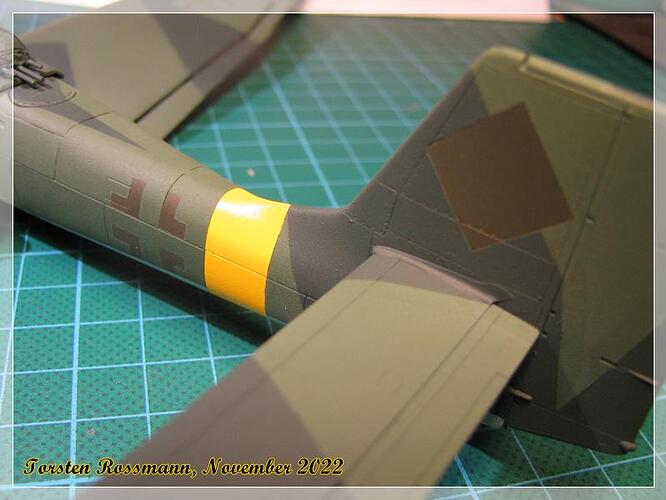 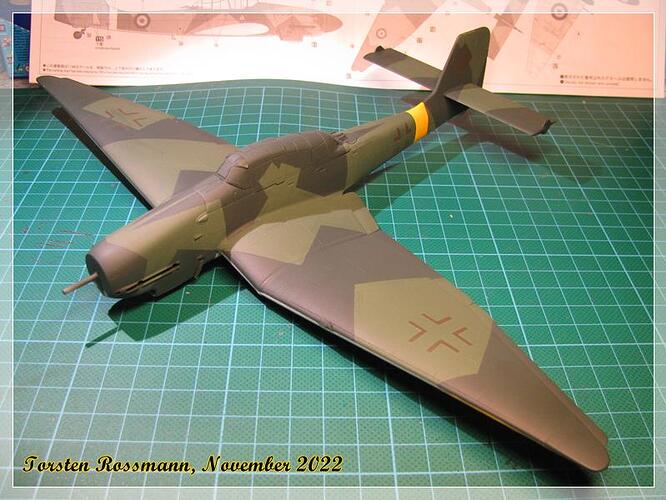 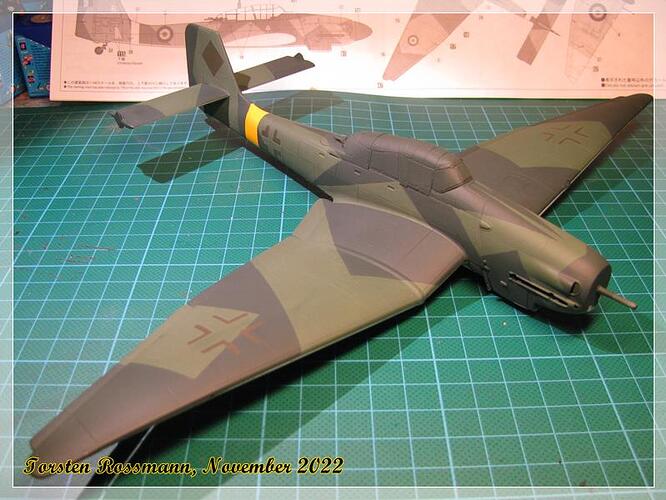 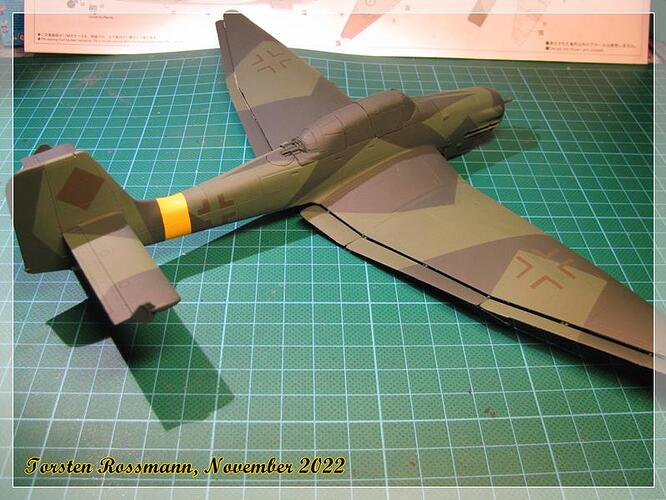 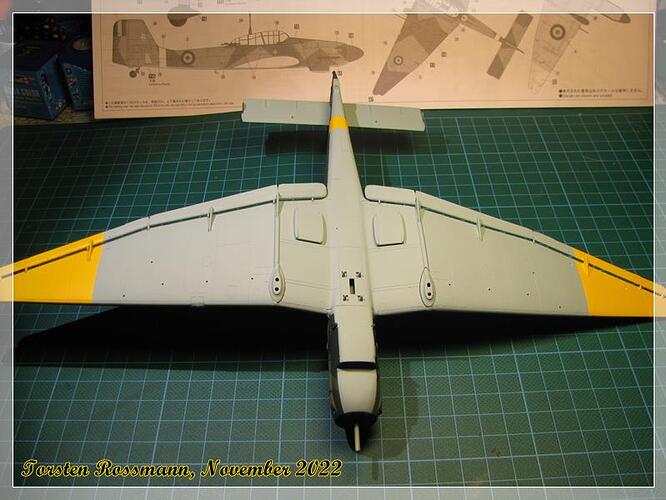 Only a few paint corrections here and there, less than I feared. So I’m quite happy how the paint and masking job is done. Now follows the detail assembly in the next days. Another update soon …

Looking very good Torsten, surely all the time spent on masking pays off. As for the paint used to cover the old markings, they used whatever they had available so nobody could contradict you.
Dragos

Thanks Dragos! Still have to paint the code on the fuselage with Dark Green. But I think, I’ll take the easy way. Meanwhile I added some parts to the build, so the landing gear is on, as are 4 of 5 bombs. Next comes the propeller. Stay tuned!

Torsten,
As usual your masking grade is a solid A. It’s neater then most I see even on cars. And as you said, weeks worth of masking, then a good paint session, dry over night and the masking is removed in no time compared to the apply time. But boy does it look good.