They used Jaguars and Mirage F1 in 1991 ( Opération Daguet) for ground attacks, maybe Jaguars with pods?

Not sure about the Gulf War, but I do remember reading they used Mirage IIIE’s and Jags armed with Martel AR against Libya in the 80’s.
I’ll have to check references for details.

Having had a quick look in my references, they seem to have been Jag A’s of EC 3/3 Ardennes that took part in SEAD strikes in support of Operation Epervier. Can’t find anything about which particular aircraft though.

Unsure which markings I’ll do, however. Was leaning toward this one since they seem to be representing the F-105G in the USAF Museum a couple hours down the road. But there’s a problem. 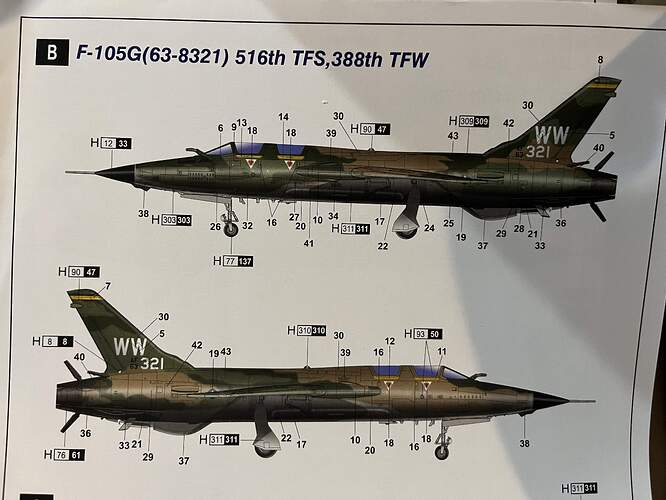 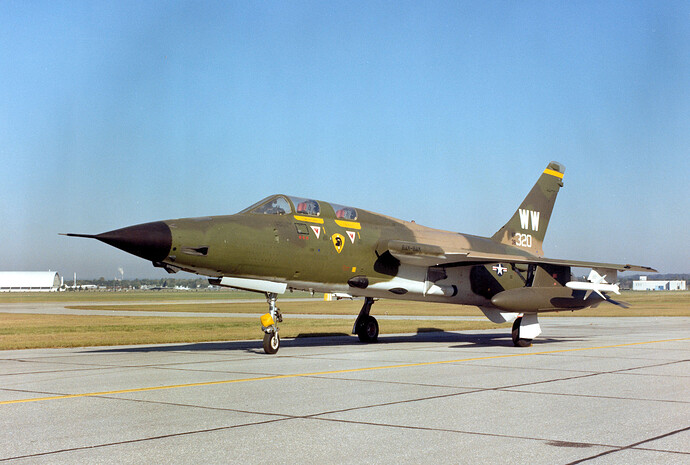 The NMUSAF 105G is serial number 63-8320 and has a WW tail code. But the decals have a 63-8321 despite otherwise being identical to 320 as preserved. And the book Roll Call: Thud lists the Museum’s serial as having a ZB tail code. 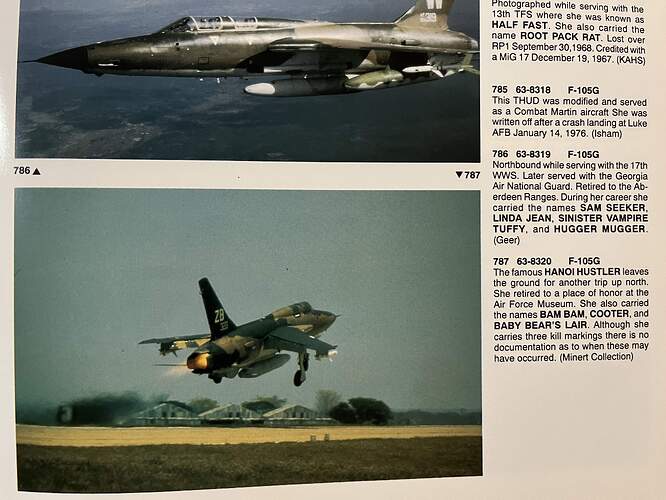 Unless someone can enlighten me on the discrepancies here, I may just do serial 62-4440. The shark mouth is neat. Would have been nice to do the jet I’ve been seeing since I was a kid, but it seems like things are mixed up there. 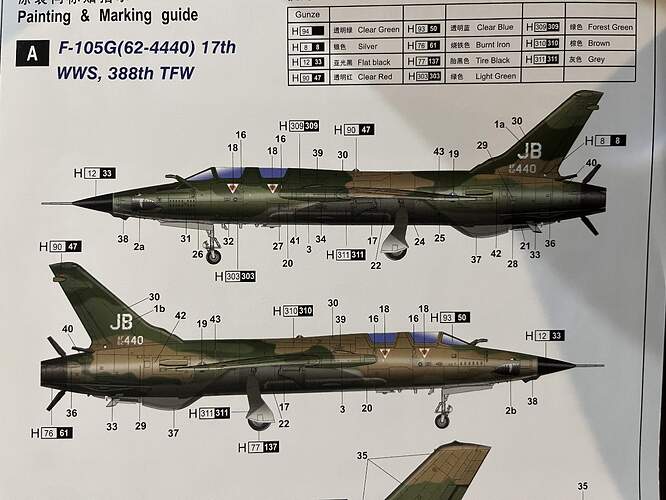 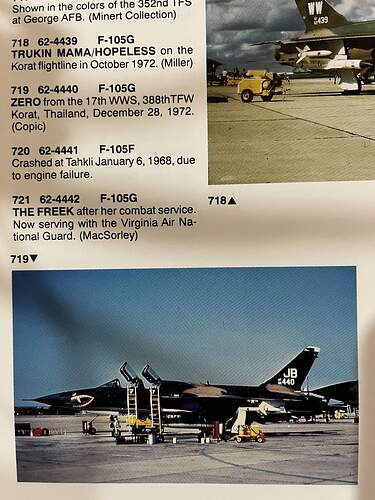 I had hoped to have the shark mouth and the WW tail code so that my collection of SEAD jets all had the same tail code, but this will still be interesting.

Edit: I guess I can also just use the “0” from the other markings to correct the tail code on the Museum aircraft. D’oh!

The Republic F-105 Thunderchief Wing and Squadron Histories by James Geer has an inflight photo on pg. 227 of 63-8320 in WW markings. Caption says mission was a recce flight over N. Vietnam in Feb. 1973. Sorry I’m not able to post the referenced photo but the bird appears to be marked exactly as shown in your museum photo.

Thanks Tim. Sounds like 320 had its tail code changed from KB to WW at some point.

Edit: Shoulda googled first…looks like that did in fact happen! But when it was subsequently restored, it went back to JB. Wonder if that means the WW was wrongly applied when it sat in the outdoor museum… 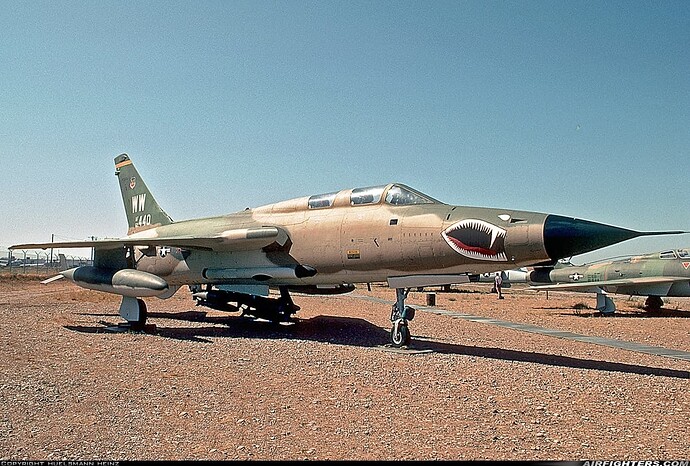 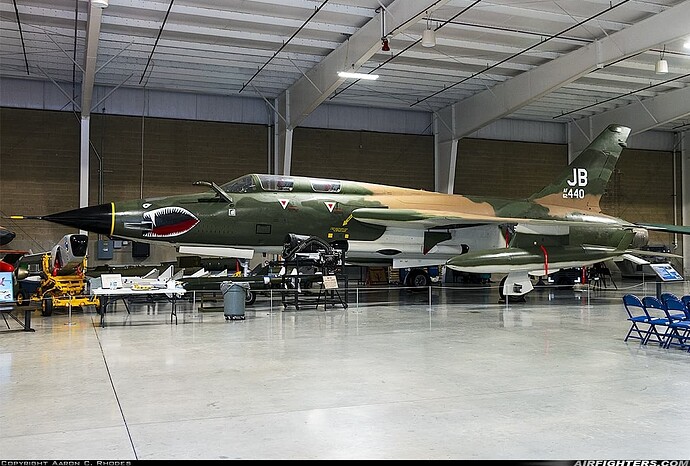 These birds carried multiple tail codes as the responsible org changed and as they moved between units. The aircraft stayed in country. The pilots, if they were lucky, rotated out.

I feel your pain. I’ve got the Italeri F-4G in the stash, w/o decals. I spent a lot of time trying to find WW codes to match the box top. Never did, ended up with someone’s surplus kit decals. Don’t know how they’ll work.

By the sounds of it you should be able to make up the markings with the kits sheet. I have to admit that I hadn’t delved that deeply into the kits markings myself. When I do get around to mine, I’ve got an old Superscale sheet set aside for it.

A little reading to get the juices flowing. This thing is a real page-turner. 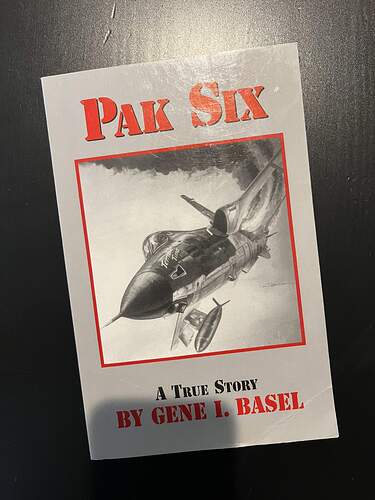 Looks interesting. Might have to look for a copy.

I had a bit of time to out together a medal tonight, let me know what you all think.
I’ve tried to do the image of the classic SA-2 SAM and launcher in crosshairs, but I’m not sure it’s obvious what it is when shrunk back down to the original size.

Maybe change the missile colour to define it better ? I like the look…

Maybe a grey? Might tone down the sky too, looks a bit bright.

Worth a go along those lines I reckon…

Of course. Unlike modelling, if I don’t like it I can just hit the undo button!

Incase anyone is interested, on this channel there is a step by step build comparison of the new Meng and Zukei Mura F-4G 1/48 scale kits.

Thanks, I might have to look at that. Not seen any of their F-4 kits here yet. I’m still waiting for the Finemolds 1/72’s to make an appearance.

I changed the colour of the missile on the badge to grey. Do we think it’s any better?

This badge looks great!
I will join with Fujimi’s 1/72 F-4 G Phantom

Thanks, first time I’ve tried any digital art for a long time. I’d forgotten how awkward it is to do with a mouse!

That’s a good choice of kit. The Fujimi Phantoms are still really nice models. Welcome aboard.