I have started on a dio about the Ukraine war showing the valiant Tractor BDE “recovering” a Russian BMP-2. So far, I have the tractor detailed and reworked to fix some of its issues since it is a 1/32 Ertl die-cast and plastic piece.

This is what I stared with. 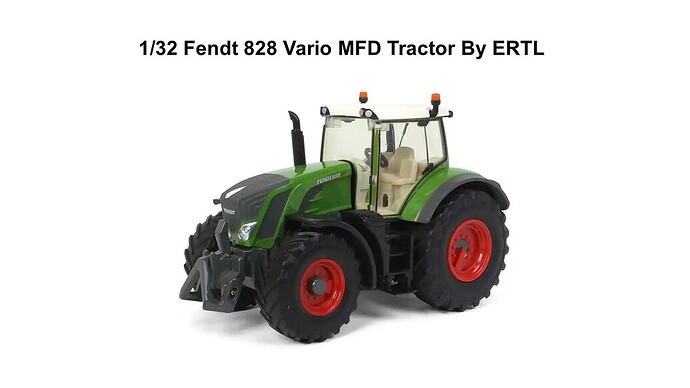 It is a German Fendt tractor that is used in Ukraine, as seen in the below pics. 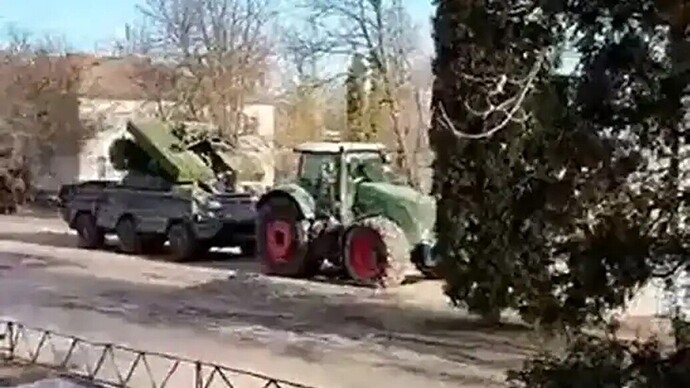 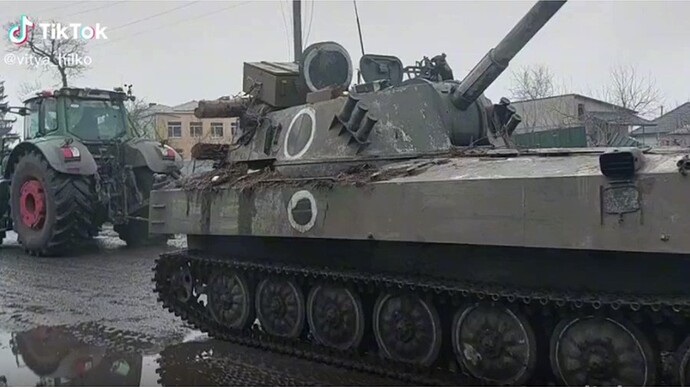 I took it apart and began improving it. First, I cut open the door so you could see inside. I also replaced the oversized steering wheel with one from the spares box. Next, I painted the floor and seats black and the rest of the interior parts a sand color, including the inside of the window frames since the “glass” is one piece and you could see the green paint from the outside. I then detail painted the dash and controls on the sides of the seat and added a few warning placard decals. 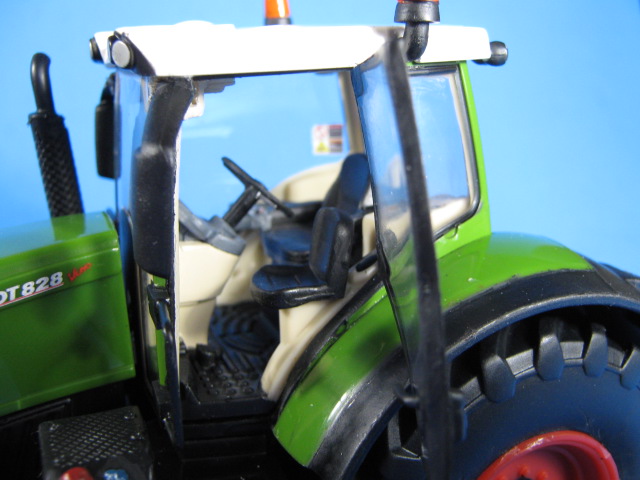 On the outside, I cut off the rubbery exhaust pipe end and replaced it with a piece of hollow plastic tubing. I then cut off the out of scale handle on the rear attachments and drilled out the ends to better represent the attachment points. I drilled a vertical hole through the rear parts for a tow point. I will insert a pin in it later. I also removed the orange beacons and replaced them with a couple clear ones that I painted orange. They are slightly better. I added the mirrors from a 1/32 die-cast truck and scratched the grab handles on each side. I also painted the whole frame flat black as it was weird, glossy dark grey color. Lastly, I painted the clear lights and the red/white tail lights. I also copied a Ukrainian license plate and printed it out, then added it to the rear.

Here is is so far. 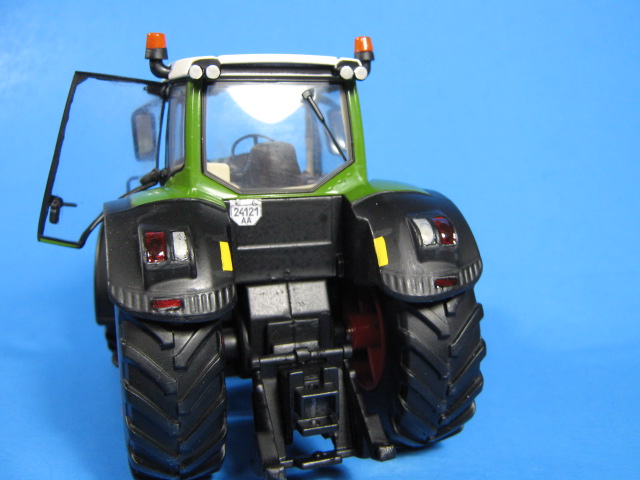 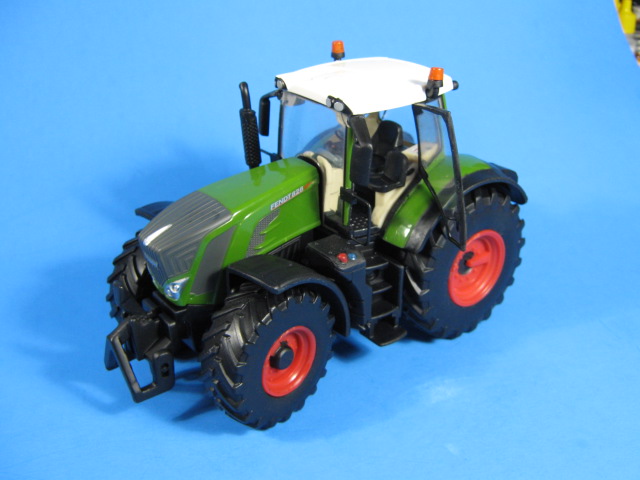 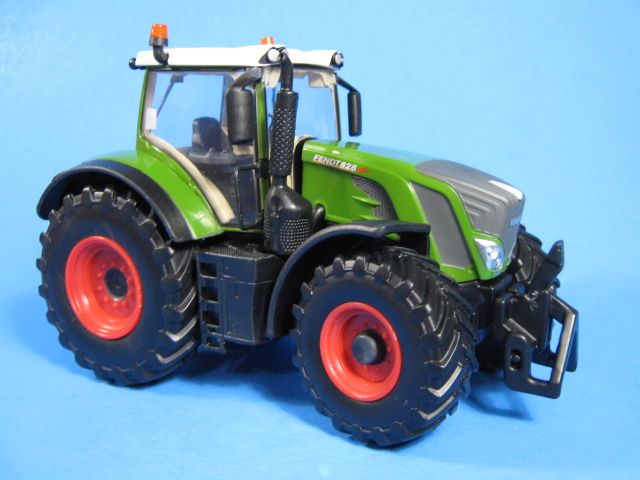 Next up is some weathering then getting started on the Trumpeter BMP-2 w/interior.

Nice title. I’ve painted the interior pretty much like yours. I think we have the same reference. I’m still making those wheel weight as seen in both of those photos.

That’s going great guns Gino and a huge improvement on the stock model. It is going to look very cool once it gets hooked up to the war salvage. Looking forward to seeing yours and Robs

I have to say, that’s a good title. Mine is simply иди в жопу. Goes well with the driver’s action toward the Russian, as seen in a separate thread.

This should look pretty good with weathering on it- lots of options for dirt with a tractor! Was there a glossy finish out of the box on the areas you painted and did those areas take the paint well?

Thanks guys. I like how the tractor is coming along.

I have to say, that’s a good title.

Thanks. I thought it fit well.

Was there a glossy finish out of the box on the areas you painted and did those areas take the paint well?

Yes, the metal frame was a gloss gray. It took flat black spray paint just fine. I also hit it with some dullcoat as well.

Great project idea. Nice attention to the details on the tractor. I think the tire treads can be turned around as well.

I do love a good title. Coming along nicely.
Слава Україні!

WAr is brutal! Amazing there is some levity about it. This Diorama was my thoughts also.

Mine is simply иди в жопу.

Wouldn’t the driver be expressing himself in Ukrainian?
I know that very many of them do speak Russian but given the situation in general I personally think that the Ukrainian version of the same interjection would be more appropriate:
Поцілуй мене в дупу!

Sometimes an insult stings a little more when delivered to you in your own language. That’s why I’ve known this one since my time in Berlin. My crew and I used to wear it on T-shirts.

Aside from that, the German equivalent of what you posted always seemed a little weak to me:
Du kannst mich mal… Hell, they don’t even finish the phrase. That’s like saying You can…
I can what? Go out with your sister? Take a hike? German swearing in general always lacked a bit of punch. Verfluchten. Really. That’s all you got?

I think every German knows exactly what the speaker means when they
say Du kannst mich mal … Using Du is a minor insult as such since Sie
is the proper way of addressing someone you are not on familiar terms with
or the addressed person is not a child. High school and up is always Sie.
Sie können mich mal … is for everyone not addressable as Du.

Interesting to know that you wore it on T-shirts

looking forward to your dio ! nice detail work on the tractor so far

Thanks guys. Hope to have a little progress on the BMP later this week.

I have been working on the abandoned BMP-2, but didn’t take many in-progress shots. Here it is with the interior mostly complete.

It is pretty much out of the box. I added a few extra pieces such as a fuel can, a few ammo cans and a blanket to give it the lived-in look. I also added the fire extinguishers, a few boxes and bags up front, axe, tree saw, and three missile reload tubes for the 9M113 Konkurs ATGM. Lastly, I added a few hoses to dress it up. 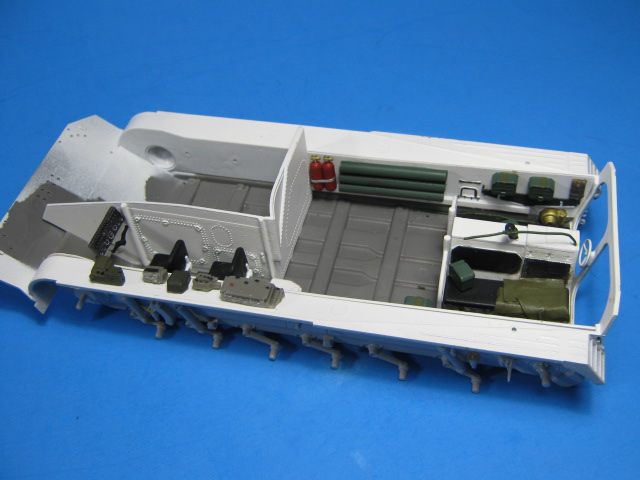 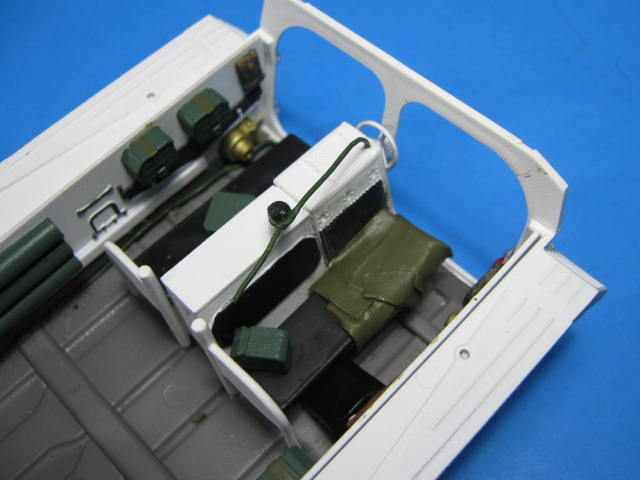 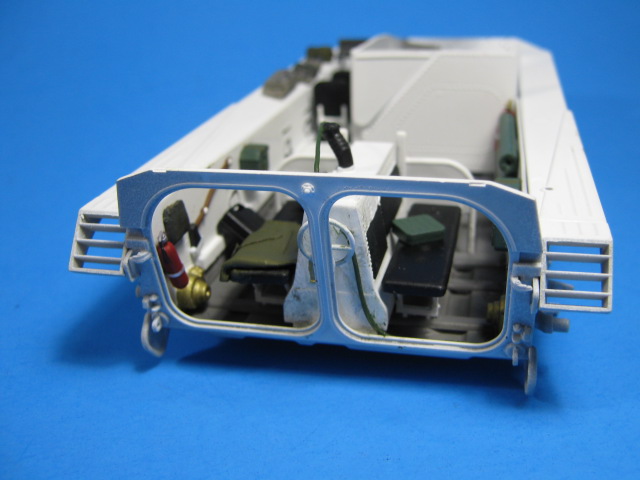 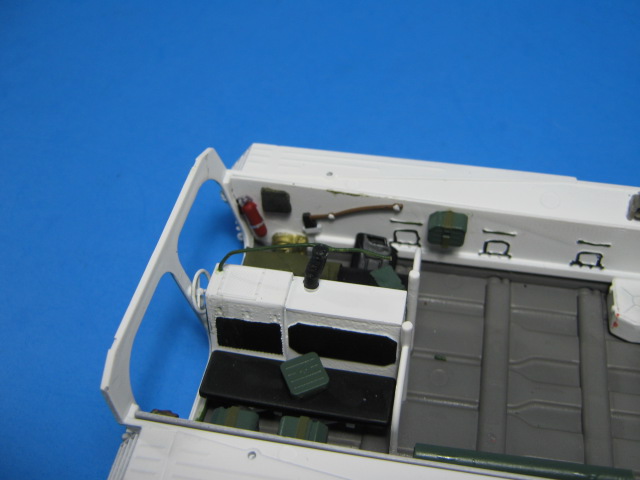 The turret needed a lot of work. Trumpeter greatly simplified it. I fixed some of it, but it could use a lot more work. First, I added the half-circular ammo locker across the back of the turret that Trumpeter missed. I built it out of sheet styrene and added ribs on top. I also repositioned the control handles from the floor (basically) where Trumpeter had them to in front of the gunner and raised up the gunner’s sight so it is in front of him as opposed to at his knees. 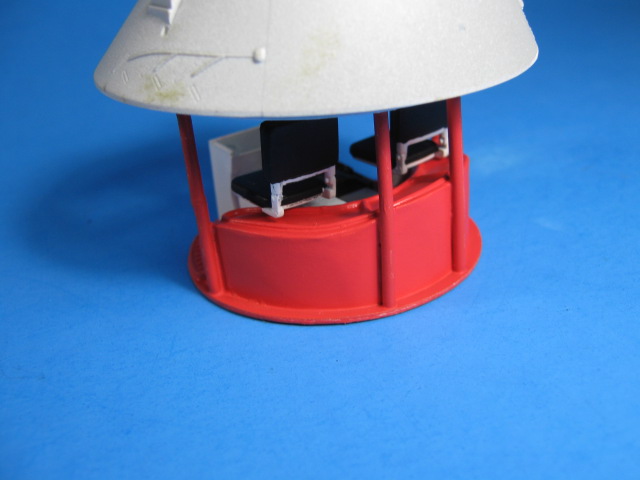 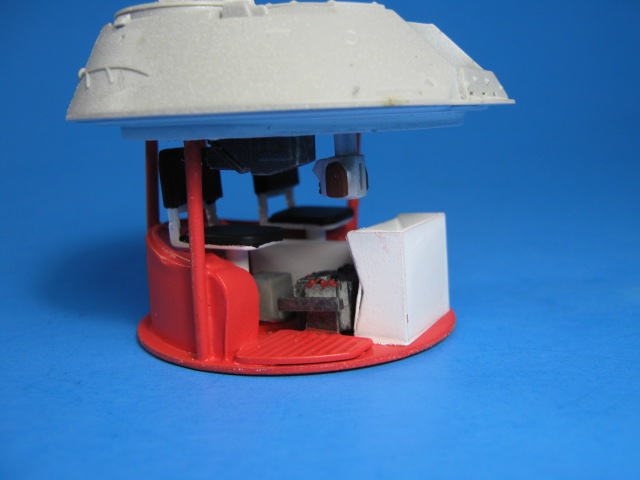 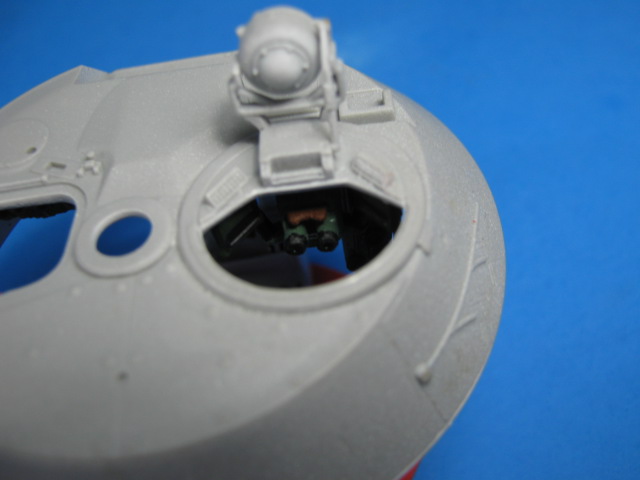 The upper hull interior. I added a couple cables that will go out to the doors. 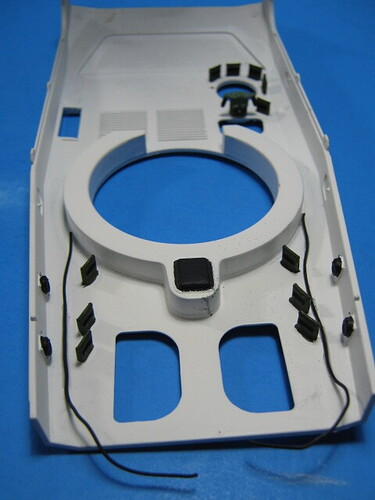 Looks good. we will be great seeing it all hooked up. The inside is nicely done and not overly complicated, just enough to look used. Very nice

Looking at the above picture of the turret, I wasn’t satisfied with the details. I know most of it will not be seen, but I added a couple more pieces.

Here is an actual turret interior. You can see there is more at the front of the turret; the circular shield, round feed tube, and a few other parts. 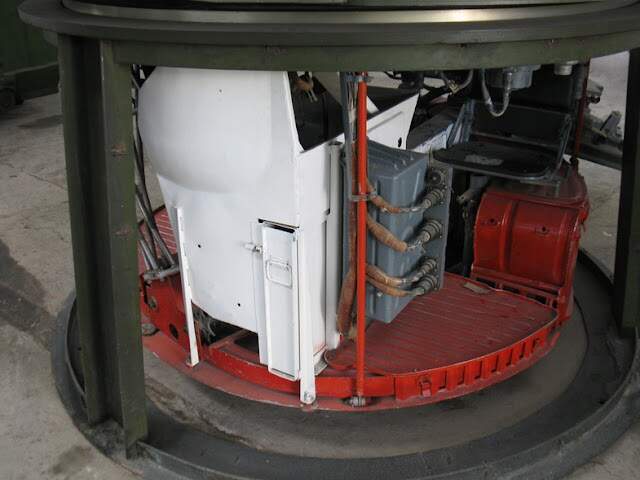 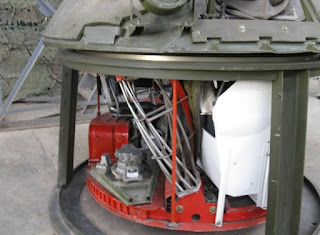 I decided to add the shield, the rounds feed chute, and the forward support poles. Not perfect, but a little more complete. 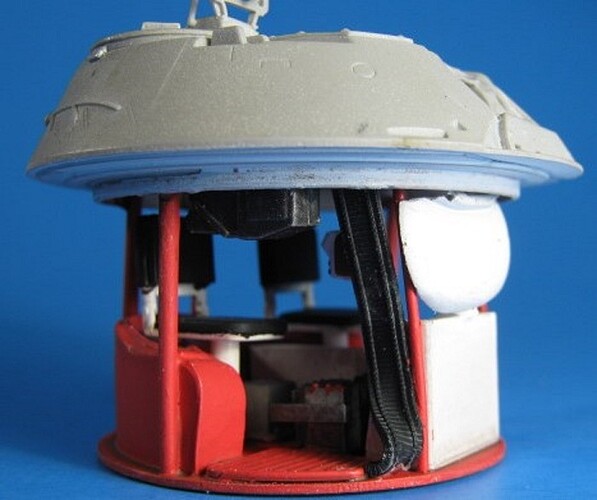 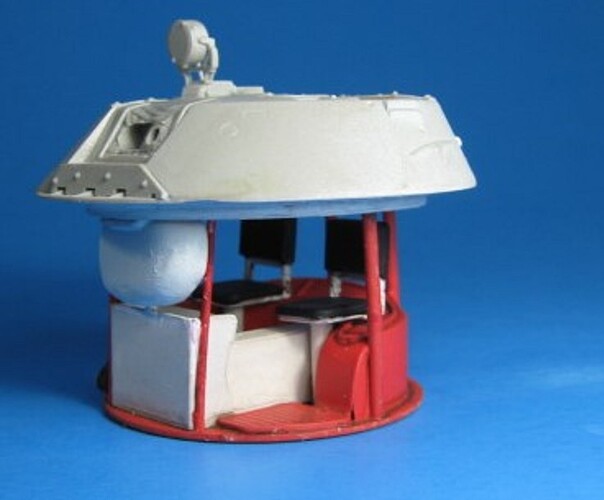 I also opened one of the side safety doors inside to show more of the turret as well, like below. 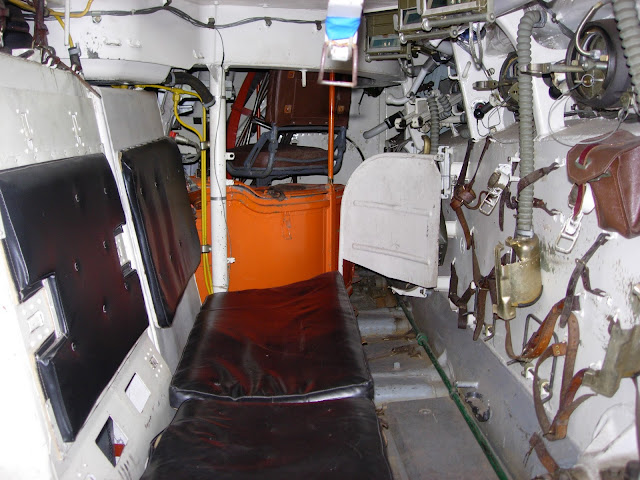 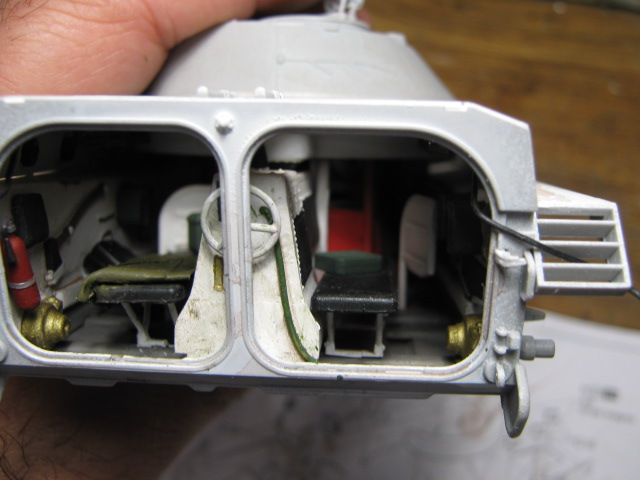 That doesn’t really matter Gino. Adding those little bits adds something to that area, helps fill a void and gives the appearance of a piece of kit that should be there. Small details can be equally good details…