Would You Build It?

Saw someone doing this on another forum,I remember the original Aurora kit from back in the 60’s
My uncle had one as a kid,thought it was cool then.
But I wouldnt build it now,just like I wouldnt build a gallows,electric chair,gas chamber,or depict a firing squad.I dont know,tanks,planes,and warships kill,but I have no desire to build and display this.
What about you,any thoughts. 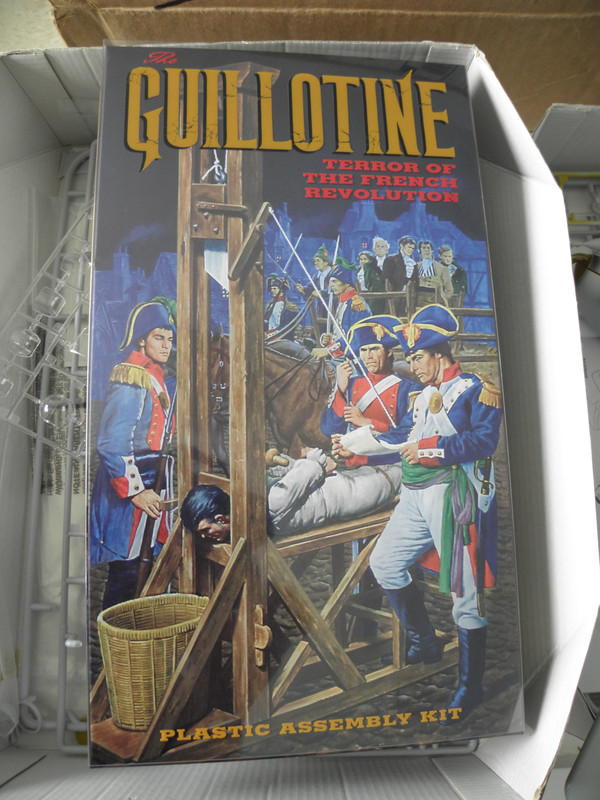 I get that. A club member built one last year, working an everything and didn’t have an issue with it. Hadn’t thought about if I would spend money to get one myself, leaning towards no as I don’t find it interesting enough to spend money on.

Pretty sure I had this kit when I was a kid, or one of my buddies did.

Does it come with a figure that lies on the platform and the head pops off when the blade falls?

Yes that was it

I would but I wouldn’t pay a lot for the kit as I have higher priorities.

My buddy in elementary school built this when new - his mother was a refugee from Hungary and she flipped when she saw it and made him toss it .
Today kids play very graphic and violent video games that are just as horrific if not worse …
I probably would not build it .

Interesting how we change as we age – I wouldn’t build that guillotine now. And yet – around 1966 when I was 10 (in the UK) a whole bunch of bubble-gum card sets came out, typically 50 or 52 to make the set. Man from Uncle was one, WW2 another, but the doozie was the American Civil War set. Some of those cards were way gruesome, blood everywhere & we loved it. I think the govt. tried to ban them which made them even more subversively attractive. I made the complete set too after 2 years of unarmed combat trading & then Mum threw them out soon after I moved out of home - wonder what they’re worth now.

I love the way topics like this get me thinking.

My initial thought, was that I would have no issue building it as a static model as a depiction of an historical event, not as a workable toy though, as that would be bad taste.

I then started thinking that I wouldn’t build a gas chamber full of Holocaust victims awaiting execution though. But what’s the difference between the two?

Nor would I ever consider building an electric chair or gallows with someone awaiting execution.

So, in spite of these rational thoughts, why do I still find myself drawn towards building the guillotine? Perhaps as I would build it to depict the execution of Robespierre, one of the poetic justices of the French Revolution? Or perhaps it’s the distance in time between when those events took place to now, while there are still survivors of the Holocaust and the other execution methods are from relatively recent history.

In any event, I don’t own the kit so it’s not going to happen.

Just want to mention thst the Nazis guillotined their political prisoners and some consciousness objectors,there may be surviving relatves of victims around.
And the French used it until 1977

This page is part of the Stuff of Legends, a site dedicated to Science Fiction and Fantasy Gaming Miniatures

Not to mention several other firms over the years, or bigger scale (54mm - 90mm and larger) stuff.

I think I would build it if I found one in somebody’s attic. Just for fun. I wouldn’t pay money for it. I wouldn’t put any political spin on it.
There was a show on History Channel called “Hitler’s Executioner” about a guy (can’t remember his name) who traveled all over Germany with a portable guillotine executing political prisoners. That was his job and he took great pride in being very efficient at it.

Us fantasy gamers must be a weird lot

the doozie was the American Civil War set. Some of those cards were way gruesome, blood everywhere & we loved it. I think the govt. tried to ban them which made them even more subversively attractive.

If I recall correctly, each packet also contained a reproduction Confederate Dollar bill in various denominations. I can’t recall the attempted ban, but there was a fuss about the “Mars Attacks!” series, I understand toned down versions of some cards were made but were not released before the whole range was withdrawn because of the kerfuffle. I believe there was a WW2 “Horrors of War” series but I don’t remember it.

Wouldnt build any of those either.

Saw that one Matt,he was never prosecuted by the Allies,and there was another one about the British hangman Pierrepont,same thing,he tried to be fast,efficient,and merciful

Thank you; I had completely forgotten that the French continued to use it. I was unaware of the Nazi use of it, I will read more into this.

" The design of the guillotine was intended to make capital punishment more reliable and less painful in accordance with new Enlightenment ideas of human rights. Prior to use of the guillotine, France had inflicted manual beheading and a variety of methods of execution, many of which were more gruesome and required a high level of precision and skill to carry out successfully. After its adoption, the device remained France’s standard method of judicial execution until abolition of capital punishment in 1981.[3] The last person to be executed in France was Hamida Djandoubi, guillotined on 10 September 1977.[4]" Pages for logged out editors learn more A guillotine is an apparatus designed for efficiently carrying out executions by beheading. The device consists of a tall, upright frame with a weighted and angled blade suspended at the top. The condemned person is secured with a pillory at the bottom of the frame, holding the position of the neck directly below the blade. The blade is then released, swiftly and forcefully decapitating the victim with a single, clean pass; the head falls into ...

All things need to be considered in the light of their time and surroundings.
A swift and precise decapitation is a lot better than having your body crushed by this method: Pages for logged out editors learn more The breaking wheel or execution wheel, also known as the Wheel of Catherine or simply the Wheel, was a torture method used for public execution primarily in Europe from antiquity through the Middle Ages into the early modern period by breaking the bones of a criminal or bludgeoning them to death. The practice was abolished in Bavaria in 1813 and in the Electorate of Hesse in 1836: the last known execution by the "Wheel" took place in Prussia in ...

No, I would not build it

That’s some wacky stuff there.

Yes, I’m going to build it. Just recently purchased it. I wish they’d make plastic kits of a gas chamber and electric chair. I also have a few of those old dungeon kits

I have to say, I would build all those as well! I am a retired cop, so I have a slightly more disturbed sense of things.