I have debated the bust issue myself as I have some. I think that we should have a separate campaign for just busts. Someone can propose a campaign similar to this but for busts only to see how that goes. Pirate figures would be allowed for this campaign.

Where to put the WIP photos? Do I have to use my own WIP thread elsewhere and to show only the finished model here; or do I post all the WIP photos and comments here in the campaign thread?

No silly questions, it is my understanding that this thread basically becomes a category, one can post all photos and comments in the one thread. Folks are allowed to create a new thread under this campaign category just for their project. Folks can also create a thread else where in kitmaker but that is harder to track but as some folks are making a figure here for this campaign to be added to a vehicle that are building elsewhere that is possible too. I would say in that case, posting in this thread a start, in progress and completion photos would be needed to keep track of easier.

I will be your huckleberry to get this one off the ground.

If folks like campaign ribbons as they are able to be added now, someone else will have to design something. I can barely paint a figure, no one wants a stick figure campaign ribbon.

Alright! I edited the thread to make you the group leader. Thanks for stepping up.

Thank you very much! This helps a lot!

One more stupid question:
There are different large scale tank commander half figures with a full cupola around them, the AA MG and other stuff. Sometimes even with a piece of the turret roof. German tank commander for example. US tank commander (which is close to a full figure too).

Well, I am not inclined to build a 1/9 scale tank turret, at least not a complete one; not to mention a whole tank. So I just want to ask if such a 200mm sized tank commander with a cupola around him might be allowed for this campaign?

Thanks for stepping up, Ryan. You’ll make a great job of running this campaign. Have to agree about the busts, they should have their own.
G.

Tank, I actually think a stick figure ribbon would be perfect for this campaign!

So I was looking for a definition for busts earlier and wiki seemed good enough for me. A bust is a sculpted or cast representation of the upper part of the human figure, depicting a person's head and neck, and a variable portion of the chest and shoulders. The piece is normally supported by a plinth. The bust is generally a portrait intended to record the appearance of an individual, but may sometimes represent a type. They may be of any medium used for sculpture, such as marble, bronze, terracotta, plaster, wax or wood. As a format that allows the most distinctive characteristi...

So in that case I think your figure would work. It has full arms, chest and torso so not really a bust.

still have the issue of making it electronically.

Great news! Good to know this!

So I will muster my stash for an appropriate 200mm tank commander miniatur. Maybe even a full figure, if I find the guts

I know this high schooler as well. Mad skills!

but I know we have at least high schooler (hate him, all that talent and time to build) who posts frequently

I have been summoned

My figures for this finally came in. These figs are pretty sweet!
I will be doing a few modifications to them though. (First is switching the silly heads that come with the set.) 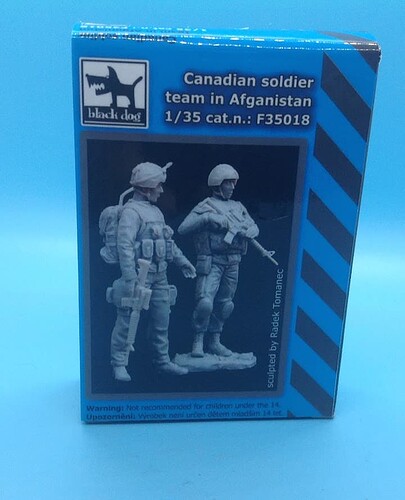 And Im pretty sure AutoLoader decals is making a AR CADPAT set for me.

Being the first campaign for figures on this site, I think anything goes OOB, Frankensteined or 100% scratched built, builders choice. So say a Friederich 1.0 would be allowed.

I like the idea of allowing started, hate the idea assigning a percentage.

My current thoughts are what is important to figure modelers?

Friederich 2.0 would be too far along in the process but would a primered Alpine only figure be allowed? Still have a good way to go. Not saying your planning to use these just used for illustration purposes.

I would like hear what others have to say on what should be that go/no line on started figures?

Your ears must have been itching…

Being the first I’m all for generous flexibility.

However, I have several partially started figures in various states of completion. Some need further modification, heads, hands, posturing, detailing, etc. Some just need to be painted. Many will remain in cold storage if I don’t get a fire lit under my a$$… However, there’s no way I’m starting anything new.

Would be great to squeeze something into a campaign. Otherwise, I totally understand.

Sounds like your in that sweet spot to use at least one of those figures, if possible pick one that is more towards the some mod needed then just paint and your golden. Welcome aboard.

Just to be clear to others, Out of Box is ok, no modifications are required to join the campaign, the above is geared towards the already started folks.

Don’t let that hold you back man. My modeling skills suck at best but I still like to build and take part. We would be glad to have you.

I think the idea is to use the campaign to pass on tips and techniques. It really doesn’t matter what your skill level is. Everyone will learn something here. Whatever level you are at now, you’ll be better when the campaign finishes. But, you have to take part to get the most out of it. Just my tuppence worth…
G.