The truck towing the tank trailer in your first vehicle photo is a Federal I believe.

Thanks for sharing this 18bravo . I remember building the White “ Turtle nose “ tank truck as a boy - back then it was molded in red IIRC .
I believe the truck tractor in the Airfix 1/72 set is an Autocar .
Too bad Airfix hasn’t bumped this up to 1/48 - perhaps they will one day . I built their Albion airfield fuel truck and it is very nice .

I believe the vehicle in front of the Crossley and shown only partially is a Fordson WOT 1 fire crash truck. 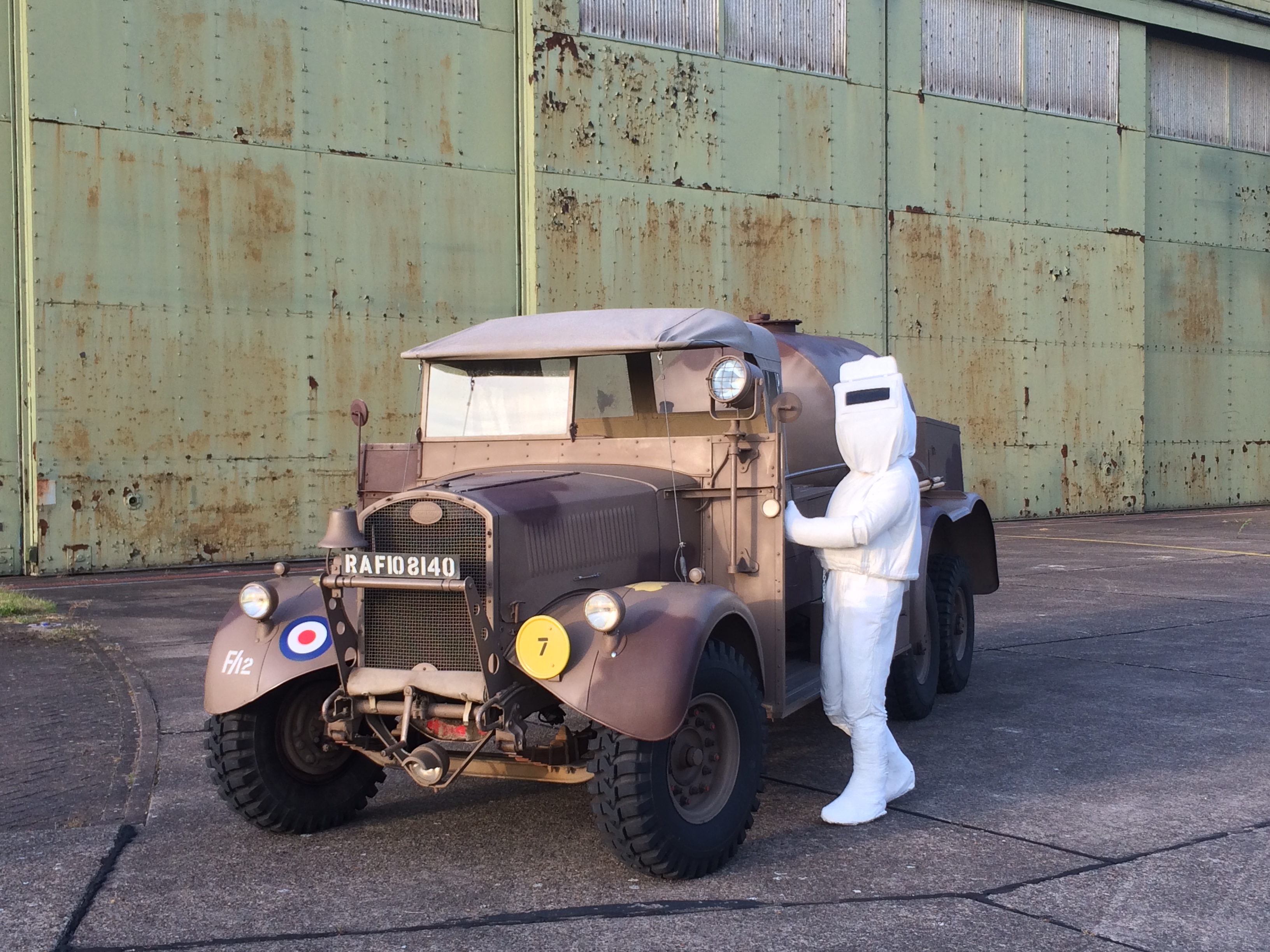 I believe the vehicle in front of the Crossley and shown only partially is a Fordson WOT 1 fire crash truck.

Makes sense. I looked into it and see there’s no model of it in 1/48. Even so, I am surprised how many of these (to me) obscure vehicles are model subjects. The Atlantis trailer/Gaso.line tractor combo is remarkable, as is the Crossley FWD 4x4 Foam/C02 Fire Crash Tender (RAF).

Thanks for all the “something to think about” info!

I say go for it. Once you make that first cut there’s no going back… 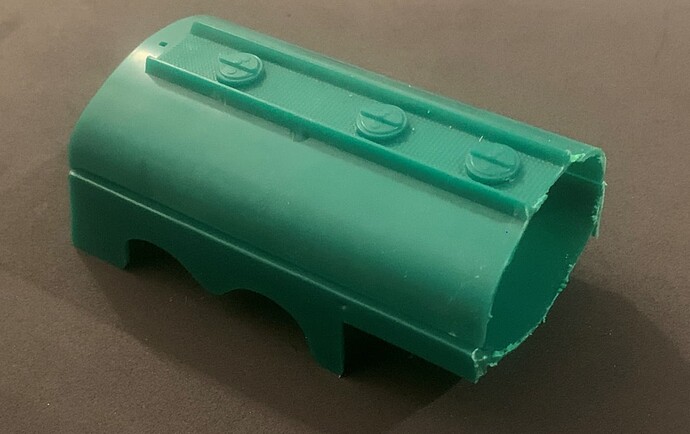 Hum. If you’re going to do this as a build, I’ll definitely follow it!

Once you make that first cut there’s no going back…

I did a double-take to see why you cut that “perfectly good” trailer! I swear I would have missed the extra curve and length up front. What was, in fact, the length of the AAF fuel trailers? Are there line drawings out there of it?

While I do plan on doing a USAAF trailer the above photo is actually for a different project.
This is the only thing I can find even remotely like plans. It’s frustratingly blurry. I’ll just to resort to some very close measuring of photos based on the diameter of the tires.
It would have to be shortened for this version, and would have the curved front cemented back on.
There’s also the trailer in the Airfix kit - the tank on this is perfect minus the skirts. I’ve thought about doing that one as well.
At any rate, here’s the blurry plans: 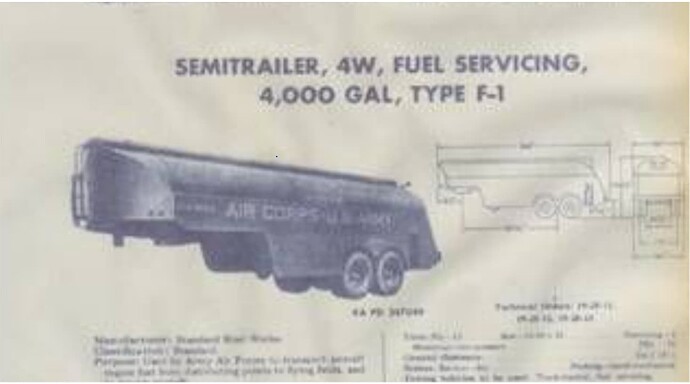 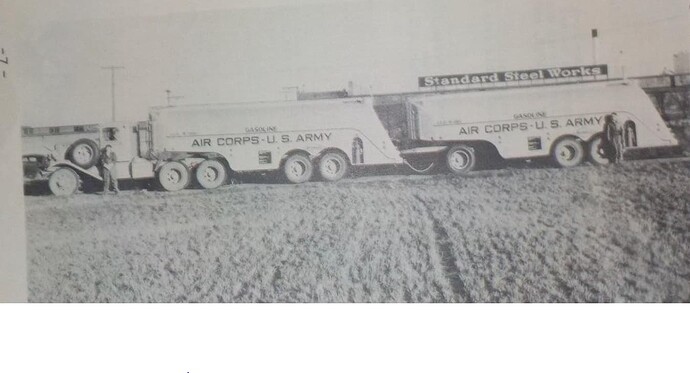 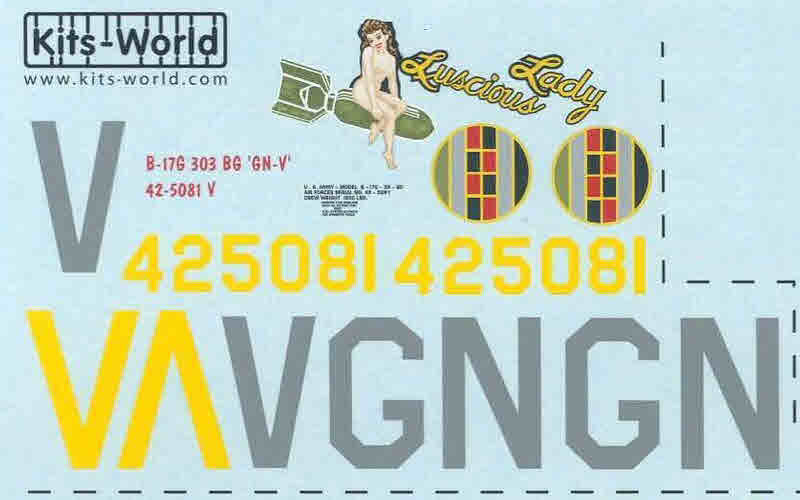 and to explain their significance. Nothing says “This is an early 427th Bomb Squadron” B-17 like they do. 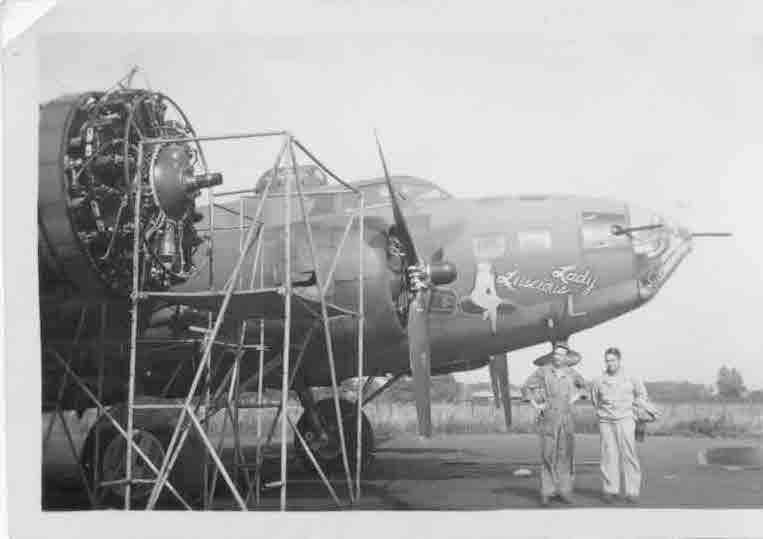 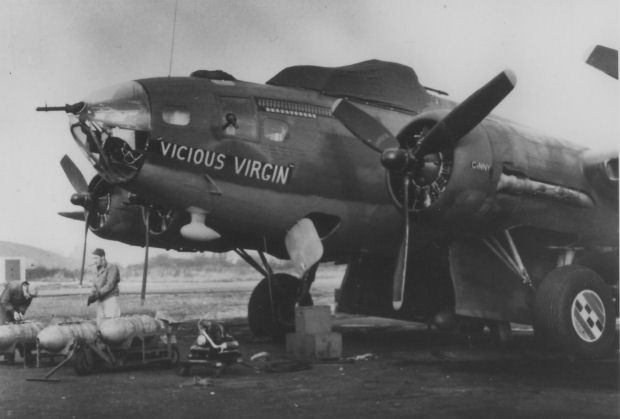 Here’s the prep work done by H.G. on the covers: 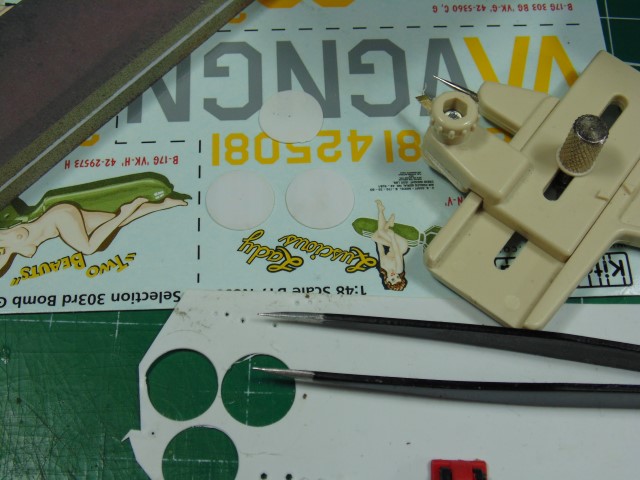 and on the decals themselves: 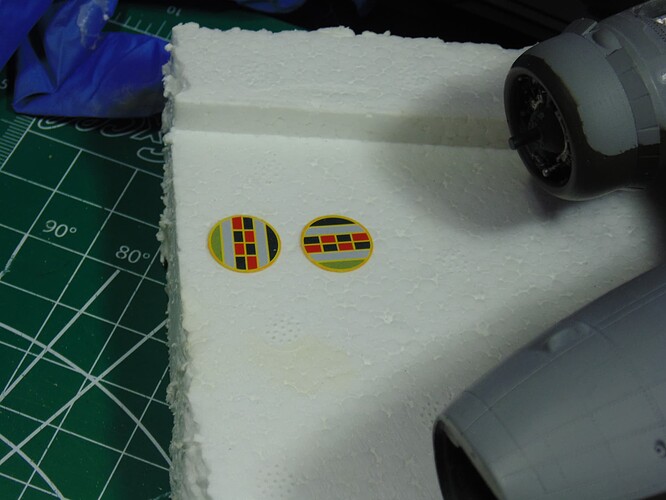 Yes I painted the edges yellow.

And here they are, on the wheels. 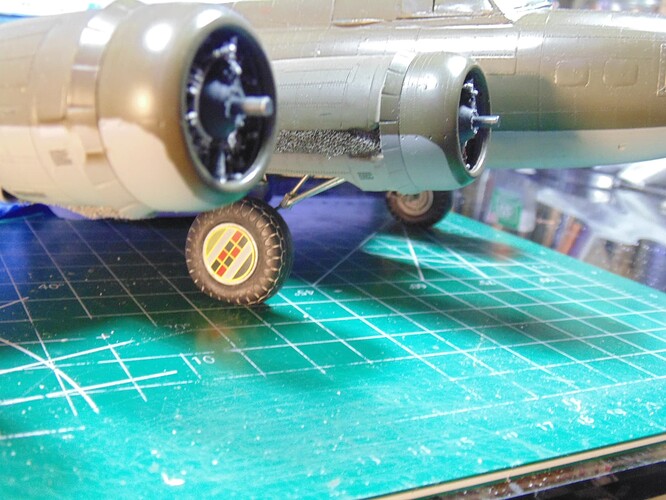 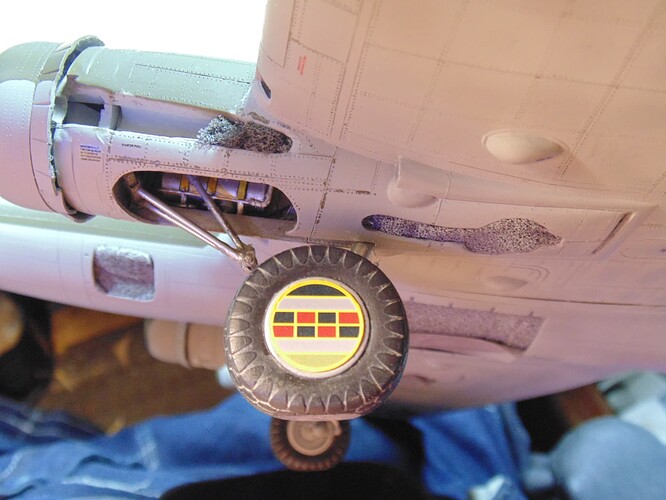 But why are they there, and why do they signify the 427th Squadron, whose emblem was the Bugs Bunny “What’s Up, Doc?” image? 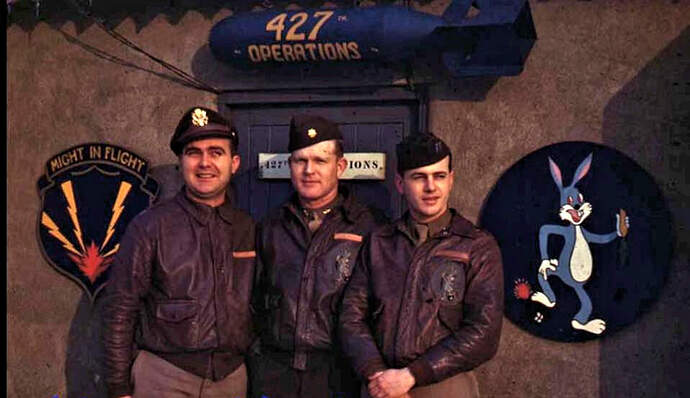 To the right, BTW, is Robert J. Hullar as Squadron Operations Officer after his crew finished their tour and (most) dispersed back to the States. He flew Luscious Lady on both the 1943 Schweinfurt missions, Aug. 17 and Oct. 14.

Heart mysteries there, and yet when all is said
It was the dream itself enchanted me:

Extra credit if you know where these lines come from, but I digress.

Where does the design come from? It’s the squadron symbol of the 38th Reconnaissance Sqdn., the predecessor to the 427th Bomb Squadron. Read on:

The 427th Bombardment Squadron was originally the 38th Reconnaissance Squadron. They were sailing to Hawaii to join its parent, the 19th Bomb Group, when the Japanese attacked Pearl Harbor on the 7th of December 1941. The ship carrying the 38th Reconnaissance Squadron returned to the mainland and the personnel were assigned to the 427th Bomb Squadron. The 427th BS became famous with its parent, the 303rd Bombardment Group (H). Because of its initial move in the Pacific, 427th Squadron members are entitled to wear the Asia-Pacific Campaign ribbon.

That last sentence is quite something, no? An Eighth Air Force 427th Squadron member was “entitled to wear the Asia-Pacific Campaign ribbon.”

The 427th ground echelon was very proud of their predecessor unit, and that’s why the wheel hubs of (at least early) 427th A/C were decorated with the 38th Sqdn. symbol. It’s a cool historical tidbit. I’m proud I first heard this straight from some Group vets and not just in a book. (Living fossil that I am.) And enjoy a bit of my oral history, please.

And now to the actual insignia:

We can infer that blue at the top referred to the sky and green below the land.

Meanwhile, H.G. is moving on to the props: 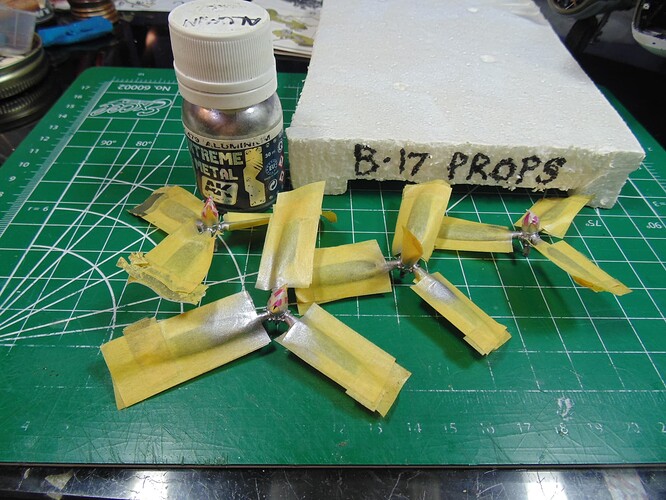 As an after thought… You could have a truck dropping the crew off for the start of a mission and a couple of ground crew finishing up. “Dawn of a New Day” 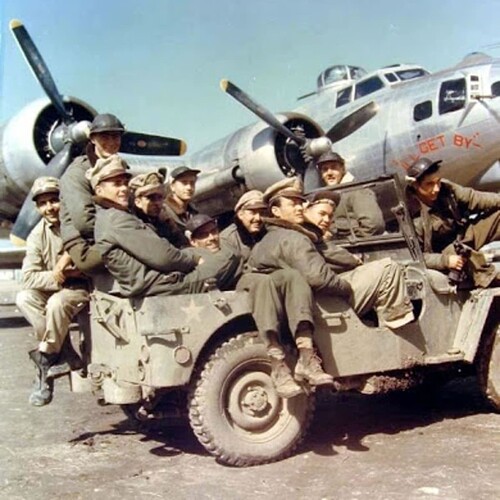 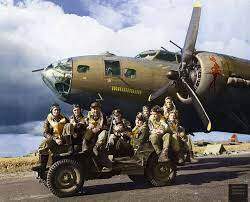 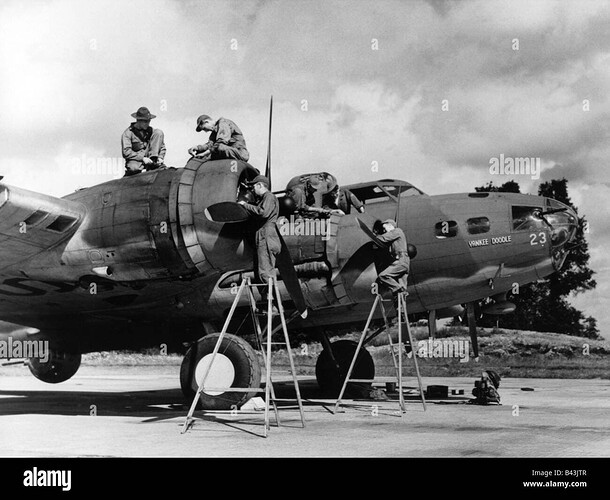 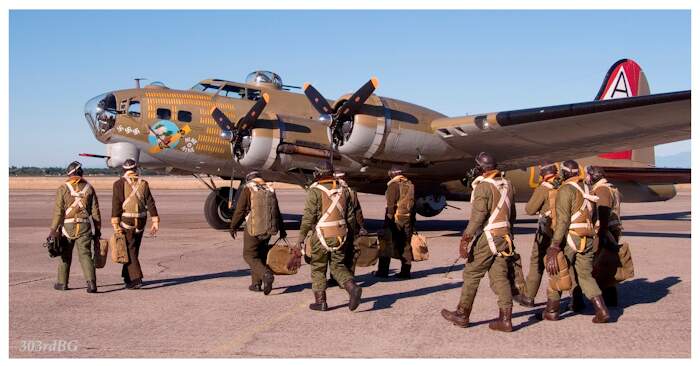 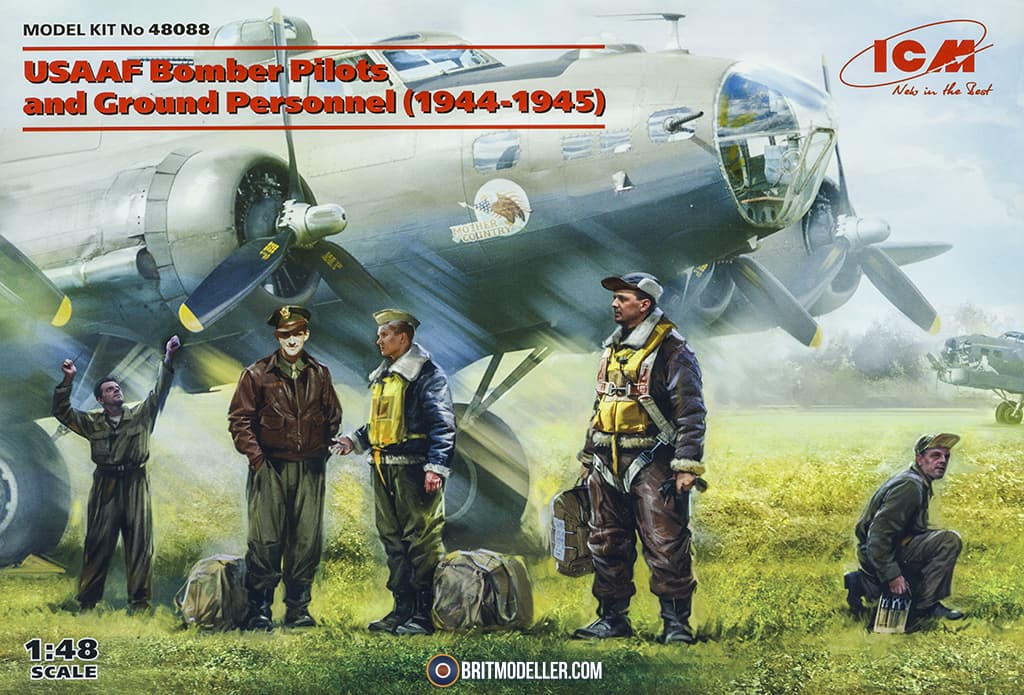 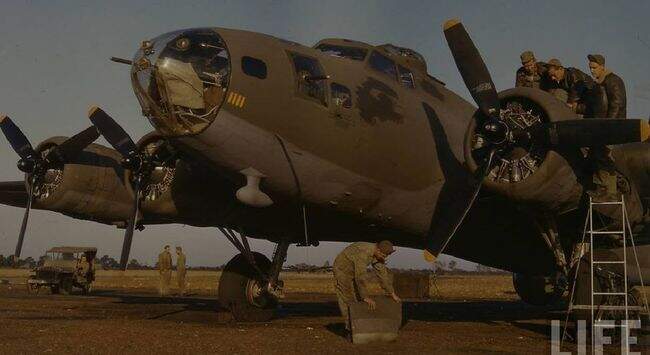 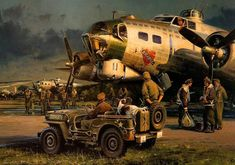 Regarding the F-2A trailer.

Hum. If you’re going to do this as a build, I’ll definitely follow it!

You’ve probably seen them in Hobby Lobby and wondered who in the world would buy these old kits. Well that would be me. Treat it with a little TLC and you’ll be rewarded with a pretty nice build, even if it is older than you are. [image] All the trailer needs are some resin or rubber wheels. Actually the wheels are nicely done. The tires need tread around them - not easily captured with injection molding. [image] But the purpose of this thread was to see if the old Revell/Atlantis kit co…

Ouch! So the hub decals need some horribly delicate amendments – top blue, bottom green & ochre-ish yellow checks? And what are the borders - surely not gold, maybe the yellow’s OK or a darker ochre?

This is one area where “close enough, I guess,” necessarily works for me. I do have one color shot somewhere - a double exposure of David Shelhamer’s - that I will post. More discussion to follow.

I do have one color shot somewhere - a double exposure of David Shelhamer’s - that I will post. More discussion to follow.

Here’s the double exposure that shows the wheel hub in “color.” 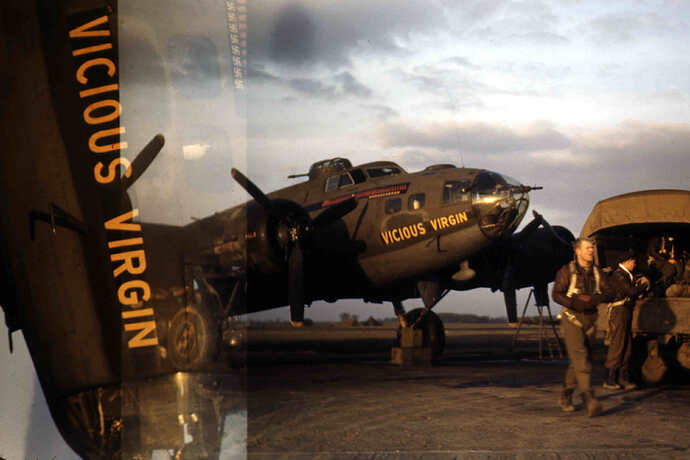 As you can see, there’s not much to see in terms of color definition, other than if I had to guess, I’d say that the light rectangles in the middle are most likely painted in insignia yellow rather than orange. I say this because I know that ground crews used whatever colors they had available, and those were often limited.

In any event, I can live with the red in the decal being an approximation of the orange. Who’s to say that LL’s ground crew didn’t opt for insignia red vs. yellow to get “close enough” to orange?

It’s funny. When I spoke with David about this photo, he said it wasn’t much use because it is a double exposure, but I found it to be a goldmine once cropped. It even features on the back cover of the 303rd Osprey Elite book I wrote, what, why over 20 “yars” ago. 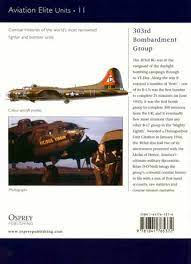 Also, the photo is useful because it shows 303rd crews used trucks to get the A/C. I’m ignorant about these vehicles, but I guess this is a Dodge. Suggestions, please.

I guess nobody would argue there couldn’t have been some individual variations on the hubs. Heh-heh but on the other hand…VV’s ground crew did have red paint, as seen below the cockpit window, but its hub-yellow looks like it was from the same tin as other yellow elements on the plane. Yet oddly there don’t seem to be any white bands either side of the checks, as in your earlier post of the original insignia…which I guess only strengthens your argument there were likely local variations & approximations…how’s that for a circular argument about hubs?

(If you both did decide to go with the mid-yellow check, slicing a block of that colour decal into small rectangles wouldn’t be impossible…just a major pain in the axle)

This is an uninformed comment on my part but I think with a bunch of crews heading out after a briefing that they would use any vehicle available at the time to get them to the aircraft.

If I had to hazard a guess, I’d say most crews got into trucks assigned to each squadron for transportation to their aircraft, 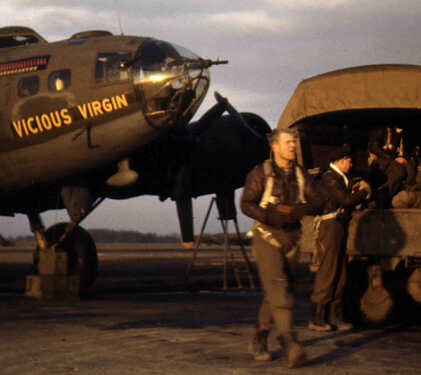 with some riding by jeep (but mostly for publicity shots, since crewmen had quite a bit of specialized flight clothing to return to the locker areas where this gear was stored between missions).