This kit turned up in the news feed here at Aeroscale at the beginning of April as a happy surprise! I immediately order one and it arrived yesterday. It’s a Dual Combo so there are two kits in the box, perfect for doing one Czech and one Israeli machine.

There is an ancient KP kit (I think they did both single- and twoseater) that was actually quite nice for the era (probably the 1970s) but this is of course something completely different, it is once more Eduard at the top of their game 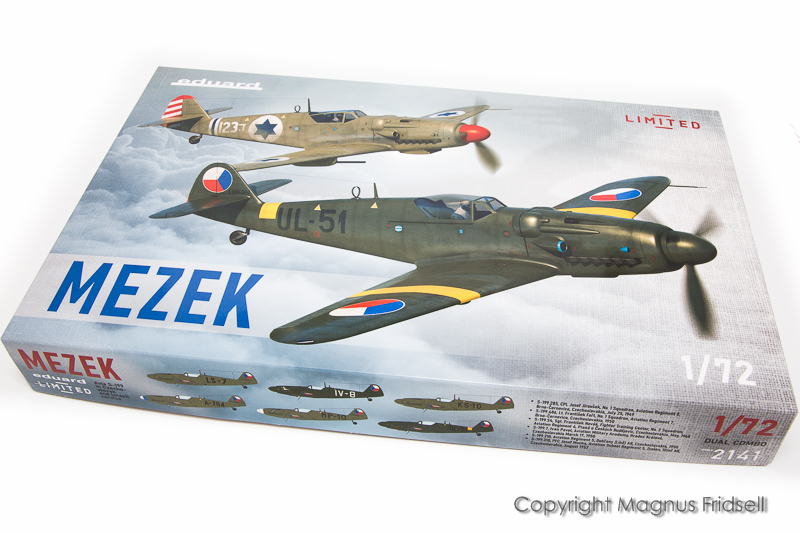 An odd pair in the box art, I might possibly go for these two! 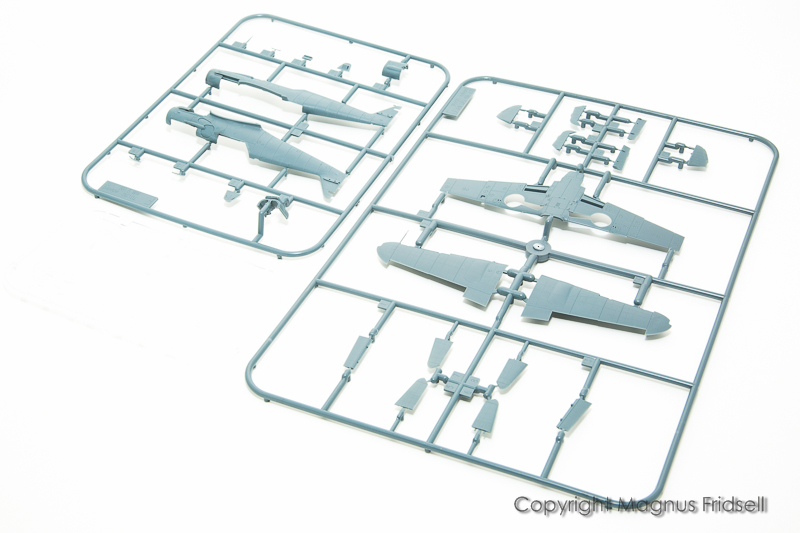 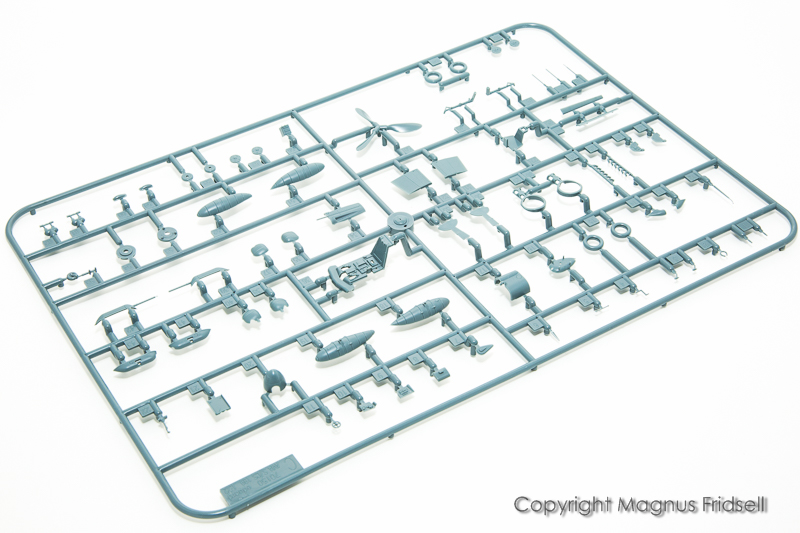 The rest of the parts, I love that bizarre prop! 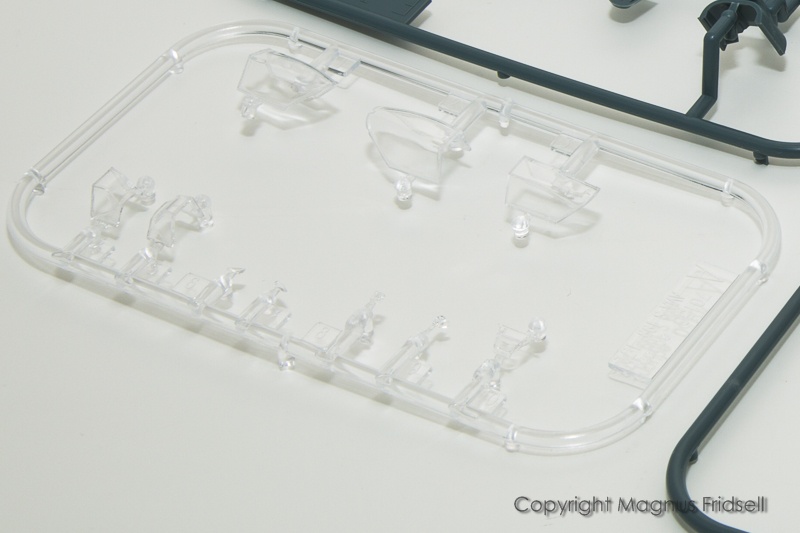 I need to figure out a way of photographing clear plastic, white background is obviously less than ideal… It at least gives an idea about what there is, clear but still somewhat on the thick side! 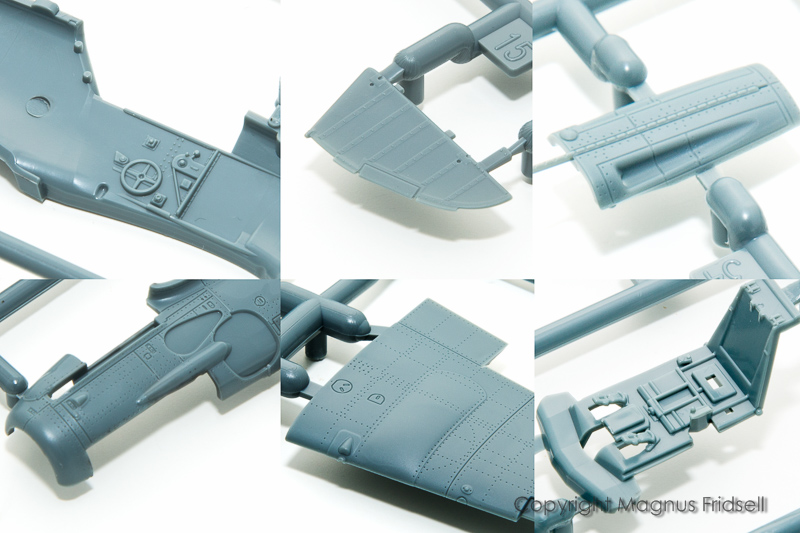 A collection of close-ups, as you can see surface detail is on par with the best there is today. 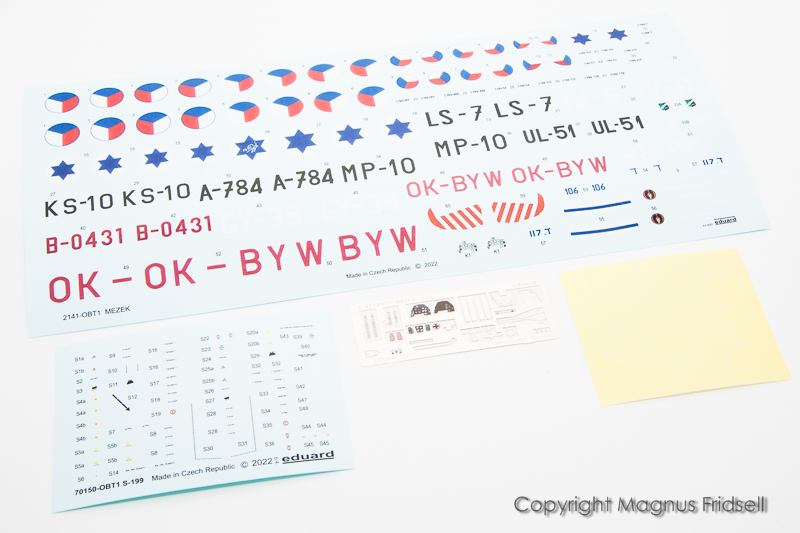 Decals, masks and photo etch. I’ve only picked parts for one build, there are of course enough of this stuff for both kits! 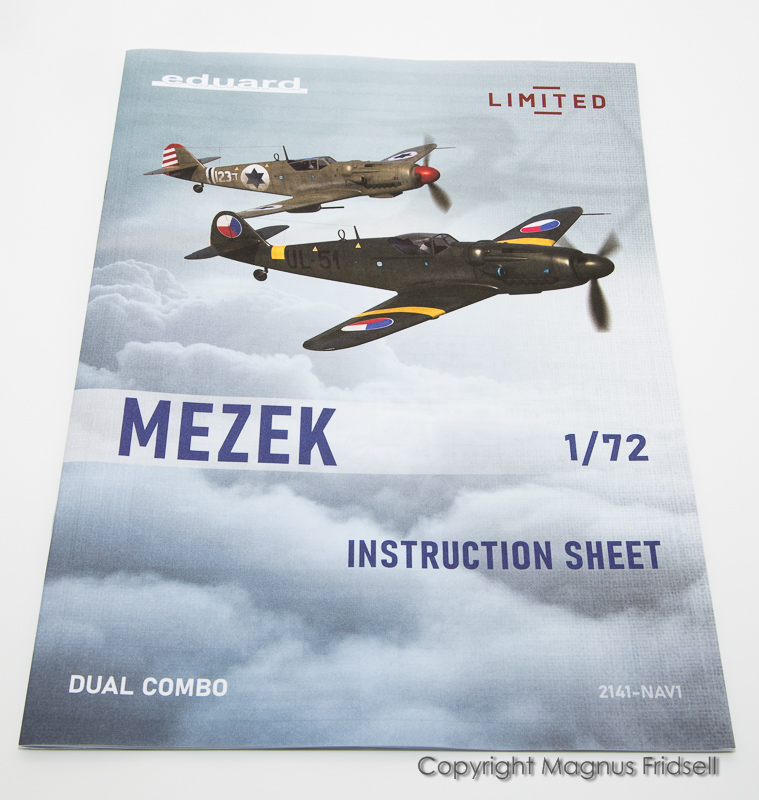 Anf finally the instructions. Not as book-like as in some of the other Eduard releases of late but still more than enough!

Very nice, Magnus, thanks for sharing! I’m a dyed-in-the-wool IDF/AF fan and have a soft spot (in my head?) for the S-199. 1/72 isn’t my usual gig, but this might be an exception; though I understand they’re planning a 1/48 version soon. I’ll be watching with interest!

Looks great Magnus, thanks for a look at the kit. Really looking forward to seeing you build it

Good on ya, Magnus! I look a bit envious on this kit in 1/72 and hope Eduard will scale it up to 1/48 also. I only have the old Academy S-199 in my stash, which is better than nothing but not up to today’s standards …

@litespeed A very modest update today but I have started!

@BlackWidow As I said above, I’m sure there will be a 1/48-version as well. Leaves the question as to what to do with the Academy kit: One of my friends would immediately get rid of the kit (usually by trading it in one of our few remaining hobby shops here in Stockholm) while another friend would immediately put it on the building table, knowing that if it wasn’t built before the new release it would stay in the stash forever 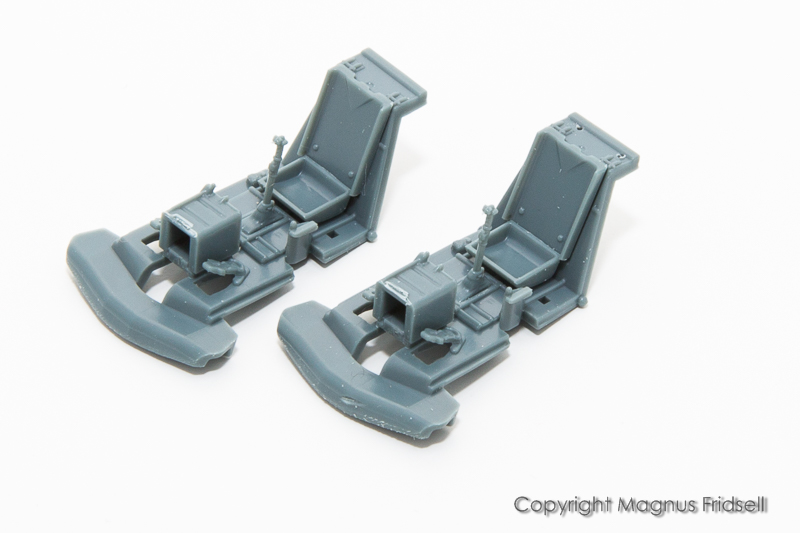 The rain stopped sooner than anticipated so I didn’t get further than this!

Magnus, your reputation is in tact, methinks

Boy, I hope they do release it in 1/144 as well. I get a kick out of doing the same airplane in several scales when it’s one I’m particularly interested in. I’ve actually done the Avia in 1/32 with a conversion.

@litespeed OK, it’s Eduard and well detailed but it isn’t THAT impressive yet Tim

@Russelle Thanks! I’ve lost much sleep over my Messerschmitt reputation last week but now I feel better

! We’ll see when I get further into the build but I have great expectations for the kits!

@michaelsatin I’m with you on that one Michael! If we both hope for a 144-scale kit, do we double the chances then?

By the way, according to Wikipedia, they built 559 of these, more or less unflyable, aircraft!

Thanks! I’ve lost much sleep over my Messerschmitt reputation last week but now I feel better

! We’ll see when I get further into the build but I have great expectations for the kits!

I’ve been working a bit on this one behind the scenes. The kits are rather parts intensive so there is quite a lot of stuff to clean up and glue together. 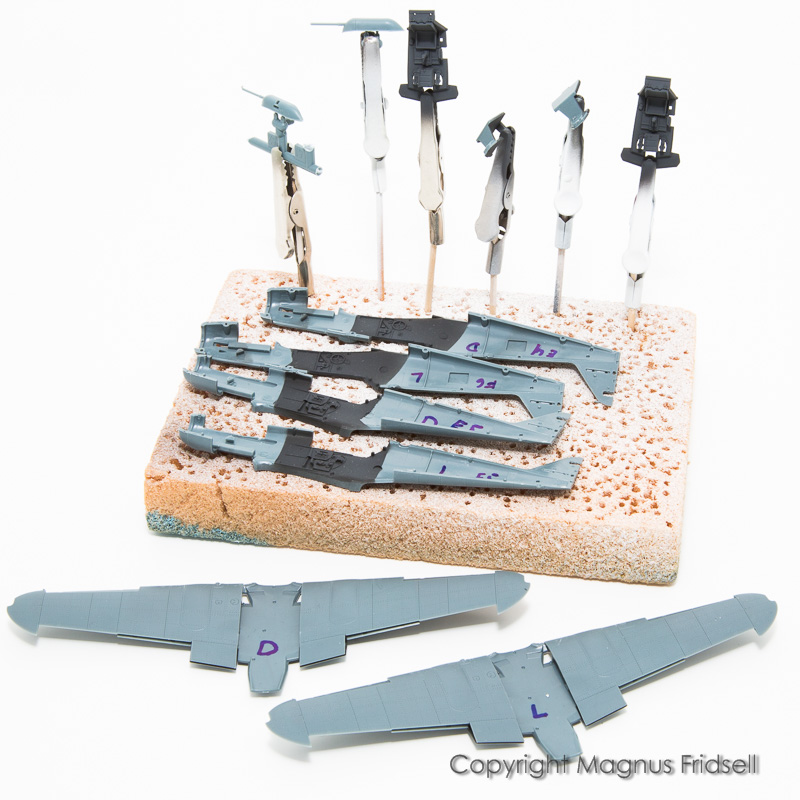 I’ve done some basic painting and note my @BlackWidow -style way of marking the parts, thanks Torsten! They are similar enough to make it difficult to keep them apart.

Things took a great leap forward when I finally got around to these full time! 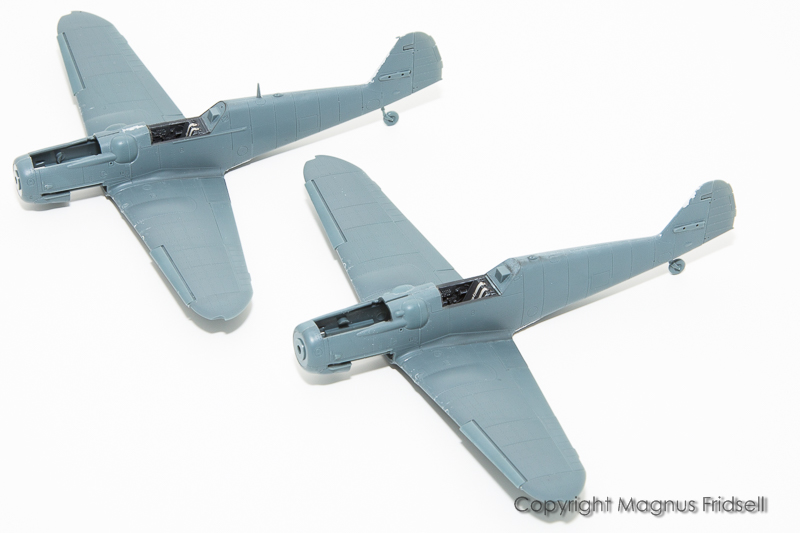 Even though there is quite a lot of parts, they are a joy to build. 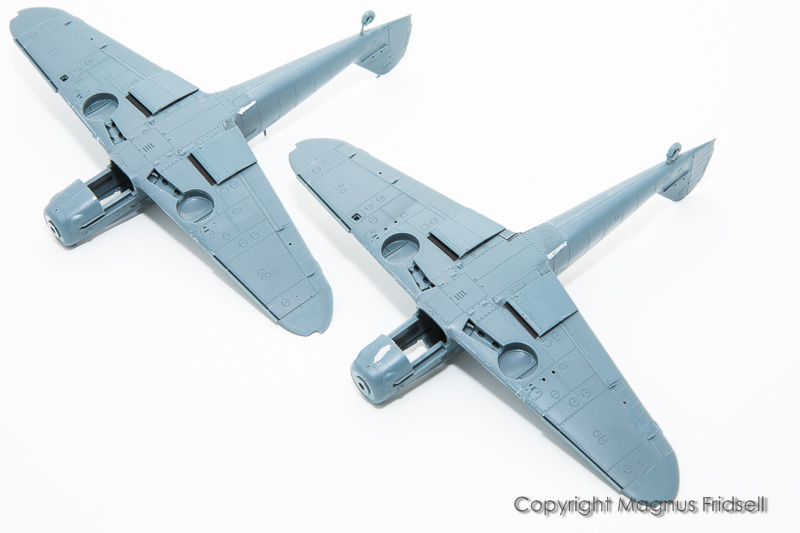 A minimum of putty around the fin leading edge, below the nose and where the wing meets the fuselage on the lower surfaces. Not bad! 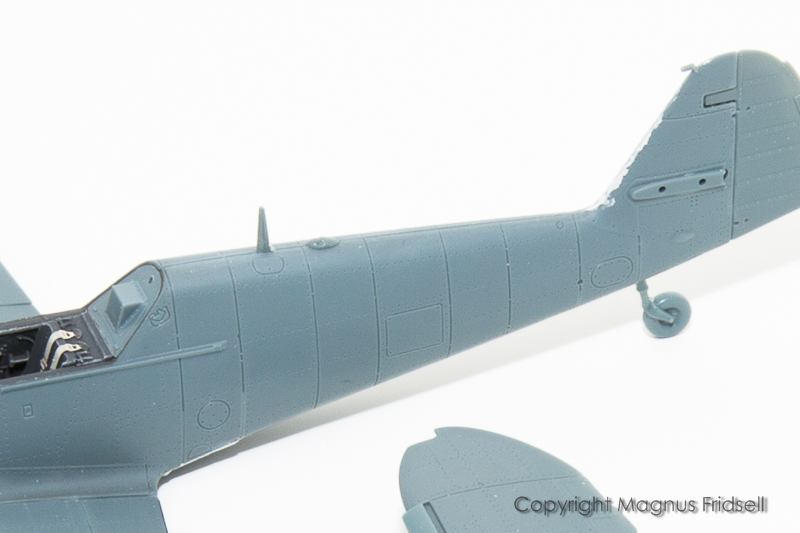 The panel line along the fuselage (both top and bottom) should be there, the 109 was built in halves creating a natural joint there. I have usually glued and filled (if needed) and then ended up with a rather delicate and difficult scribing operation.

I picked up this trick from somewhere not too long ago: chamfer the edges of the fuselage halves, work carefully and only a minimal chamfer! After gluing the halves together you will hopefully end up with a perfect line without any of the hassle!

And finally a logistics mistake from Eduard when it comes to the kits in the dual combo boxing:

There is only one short tailwheel for the two kits, this is used by the markings A B C D E F H J K L.
The two long ones are used by alternative G and I…

This limits the combination possibilities rather severely, I opted for looking the other way and building marking variant “D” with an incorrect long tail wheel while “L” get the correct short one, I doubt anyone will notice

… This limits the combination possibilities rather severely, I opted for looking the other way and building marking variant “D” with an incorrect long tail wheel while “L” get the correct short one, I doubt anyone will notice

Good progress on your Mezeks, Magnus

It’s your model, so if it’s good enough for you, who are we to argue? Even if someone here would know it?

Wouldn’t it be possible to just shorten a long tail wheel? Or do they have other differences?

@michaelsatin There should be no great difficulties in shortening the strut, I only did’n do it

! Considering my track record with broken-off tail wheels lately, there will be ample chances to shorten it later on

I’ve spent the last week taking care of all the tiny bits and doing the final fixing of the airframes. 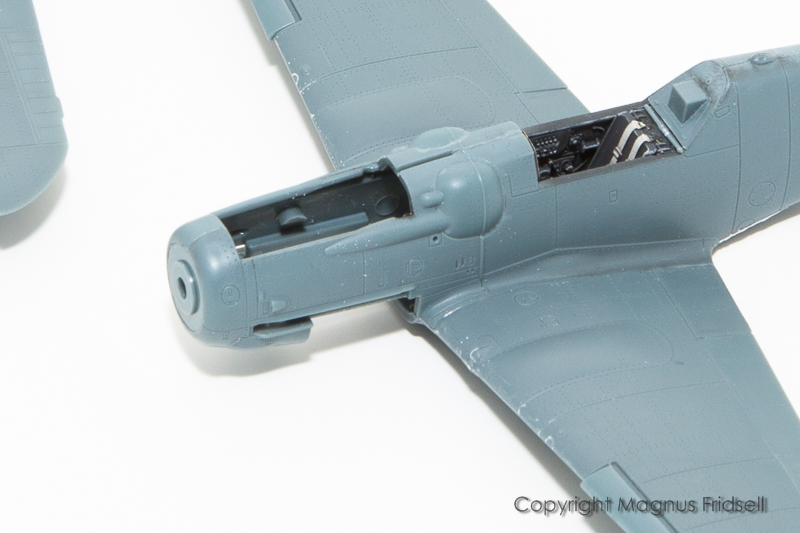 A flashback to last week. Doing the model this way makes sure that gun throughs and center hinge are finely done but it also calls for some careful fitting of that central panel. 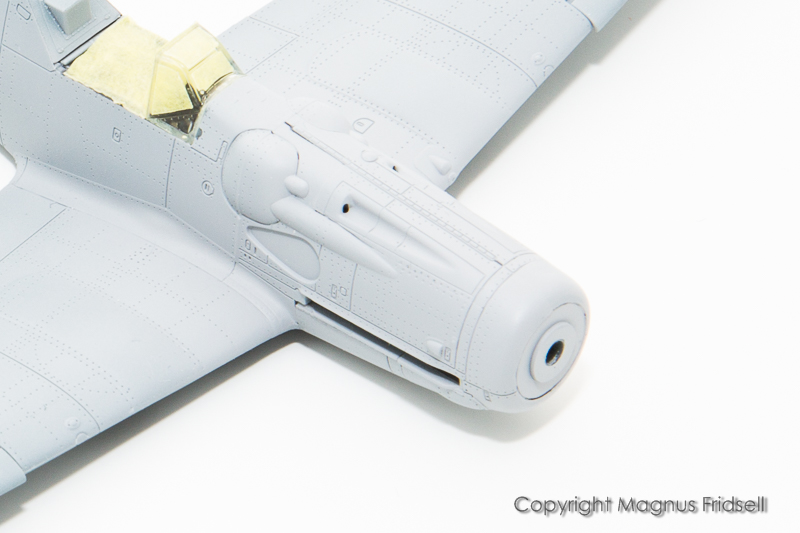 No matter how careful one is there will be a thin line around to fill and sand. It took a fair bit of time and work but I’m happy with the result. 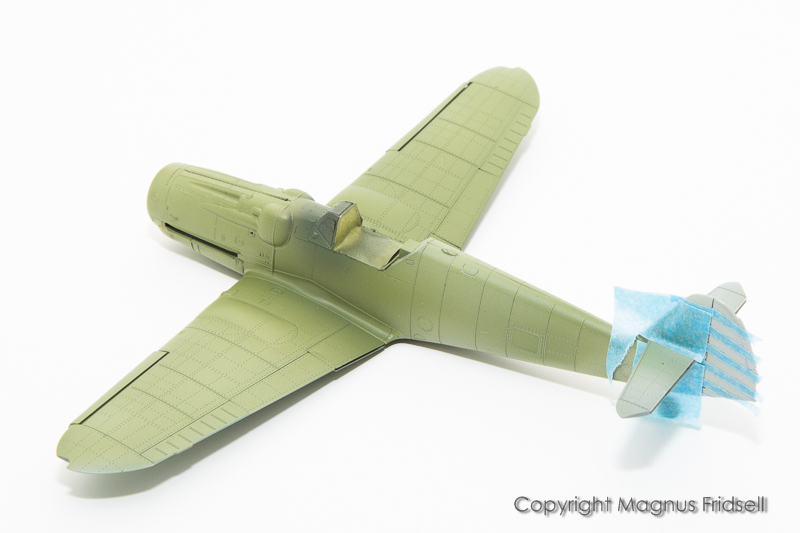 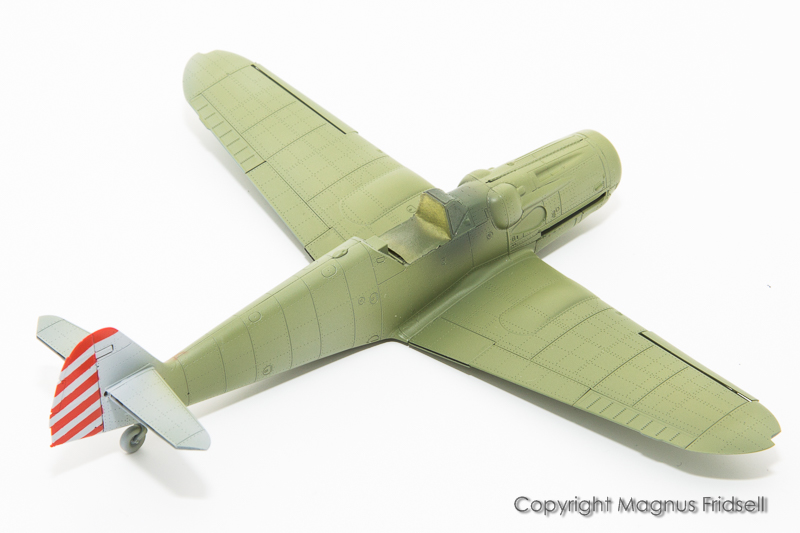 …painting it and peeling away the masks!

The light green paint was leftovers from base painting the prop. Since it has the Czech record for fat prop blades since the 1940’s something has to be done in order not to end up with a giant, dark green, prop at the front end of both builds! And never waste perfectly good paint, the rest ended up on the airframes!

Probably the last update before the summer holidays but I’ll be back in mid-July! 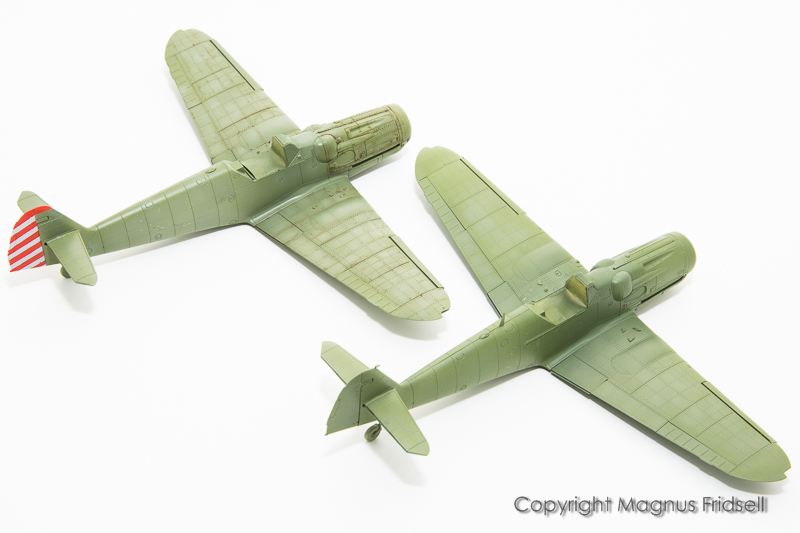 What a beautiful couple

! I’m working on them one at a time now in order to avoid them looking too identical! 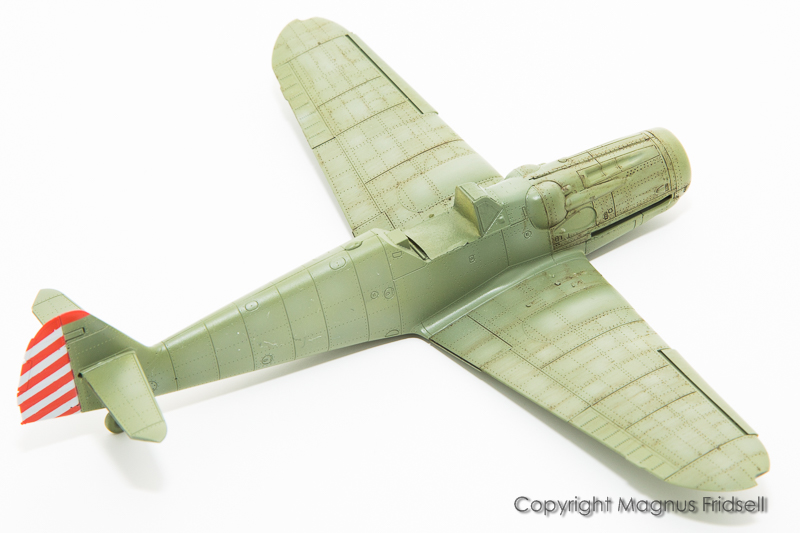 The Israeli one has a slightly lighter base tone, I also sprayed the horisontal surfaces randomly with an even lighter mix to make it a bit sun bleached. Not sure if that’s strictly realistic since it seems like most crashed or were withdrawn from service within just a few months but anyway, that was my choice! I use “Brown Wash for German Dark Yellow” to accentuate the very nice surface detailing, I’m half way around with it, wings and nose are finished. Speaking of the nose, it looks rather dirty on the photos, I better tone that down a bit… 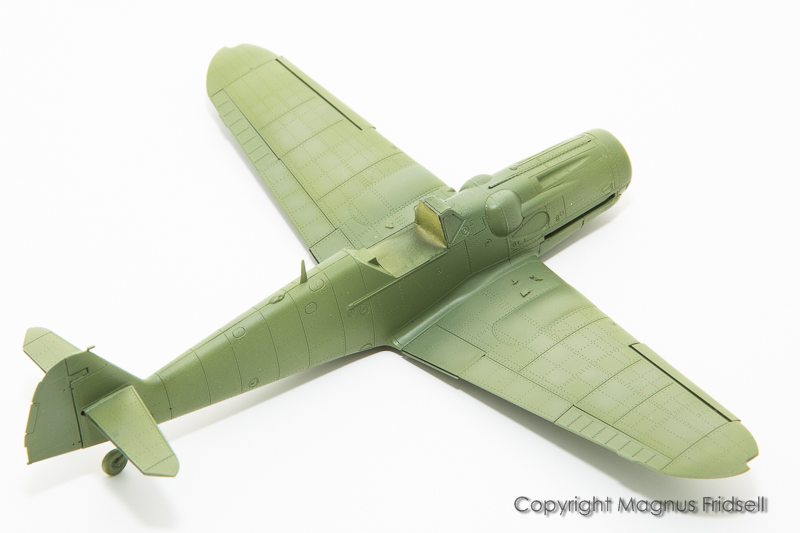 This one is still just base painted but I’ll use “Dark Brown Wash for Green Vehicles”, which is a bit darker.

Very nice Magnus! Just got mine for Father’s day here in the States and am trying to decide if it has what I need to do two Isaeli birds with some modifications. Either way, I’m liking it! I’m sure they won’t turn out as nice as yours, but c’est la guerre!

@michaelsatin Whatever your ambitions or abilities, you’re in for a treat with these! At a quick glance though, there are only enough parts for one Israeli machine, the other one has to be a Czech one if you are following the instructions strictly! Sorry to disappoint you

! On the other hand, several of the Czech ones are rather tasty…