Been a long time since I tried a build log, 2015? Thought I’d try it again with this little gem. Here’s the original post:
OK, I’m off and crawling. Tactical change of plans. The guy that held this kit for me challenged meto have one of them built by the next club meeting. 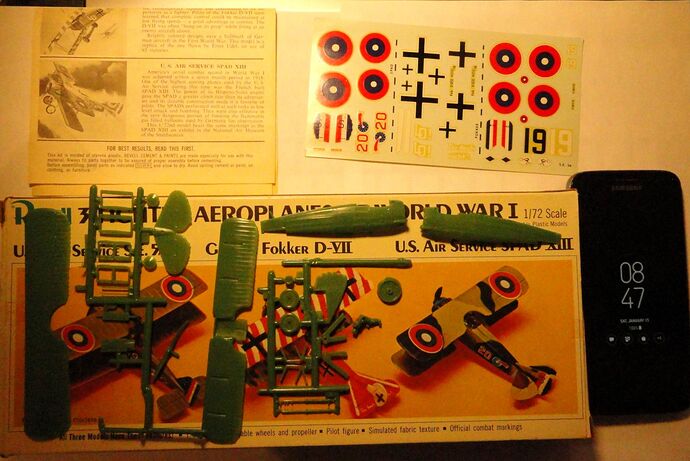 It’s small enough, but can I get it rigged and painted in 3 weeks???

Build day 1:
I sprayed the interior and the bottom of the top wing Tamiya Deck Tan, hope it looks a little like doped linen.

Build Day 2:
Fuselage glue up. it’s small and seems to line up pretty well. Mold halves shifted over time so one side is thicker than the other. Might only be a problem in front of the cockpit, the reast of the exterior surfaces seem to align 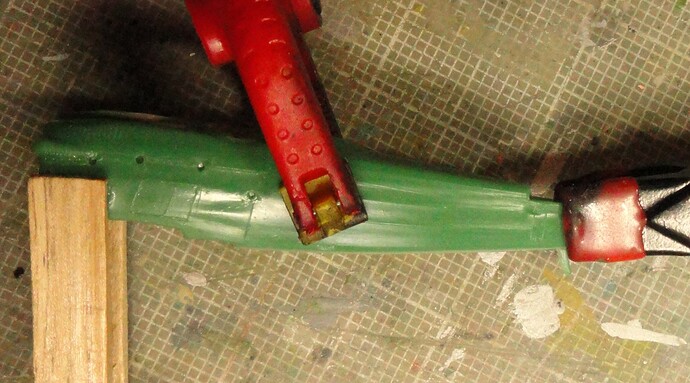 Nice start. just remember there is no Frigging with the Rigging Mark.

"Biplane rigging is the path to the dark side…rigging leads to anger…anger leads to hate…hate leads to suffering" Yoda, Jedi Master Modeller

Day 2 did not end well, I was unable to put two threads into one hole so that two lines appear to come from the same place. Quit and went to bed to think about the problem.

Build Day 3
Drilled out some more holes for the rigging. Got about 1/2 the lines placed.
Unclipped the fuselage and sanded the seam. It’s going to need to help to cover the seam.
Installed the top front fuselage and guns, Some how managed to break off the tail skid.

Applied some Mr. Surfacer 500 over the seams and fashioned a new tail skid from some strip stock.

Build Day 4.
Didn’t get any threads placed. Got some holes drilled for more threads. Mounted some control arms on the rudder. Mounted the lower wing, looks like there’s going to be a big gap to fill there. Sanded and re painted some of the fuselage gaps. 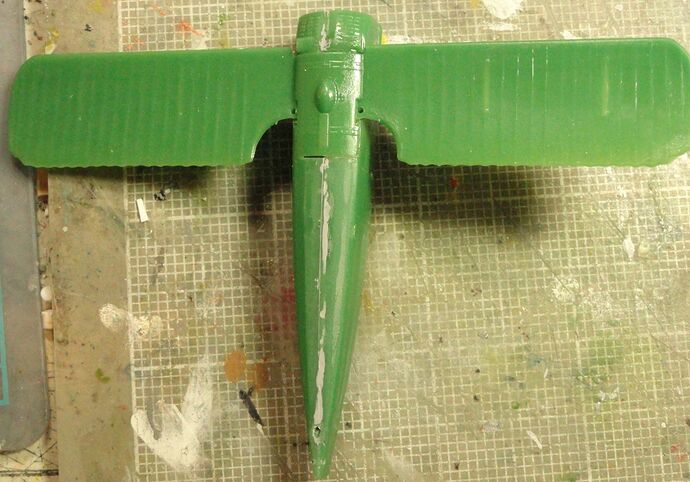 Build Day 6
Did some filling and sanding, going to let the putty cure. 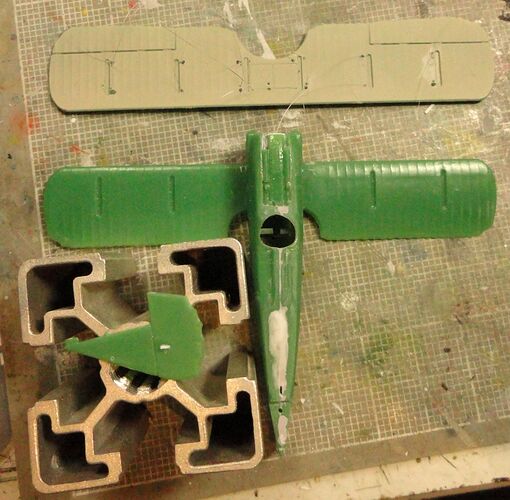 Build Day 7
Starting to look like an aeroplane. I got the stabilizer and rudder installed. Most of the holes drilled and nearly all the gaps filled. 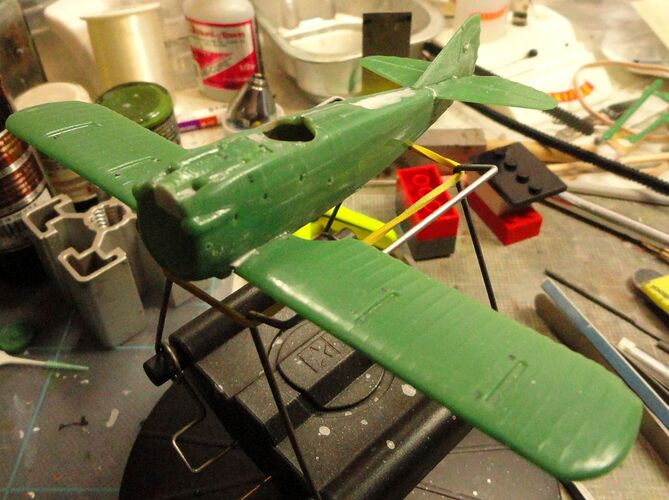 Build Day 8
Primer! Starting to feel like progress, except for all the issues the primer highlighted. 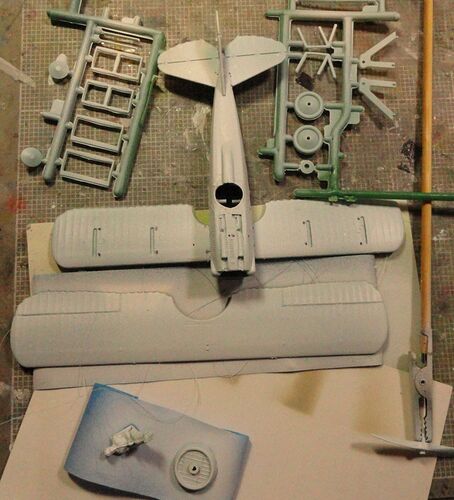 SPAD Primer Small1380×1519 272 KB
This green plastic is something else. I’d spray it with the white primer and it still looked green. Get the light behind it and it shows through like there was no primer in place.
Wow, 8 days in and it’s not even all together yet. Instructions have a 1966 copyright date. Back then I’d have built it and flown it to destruction in 8 days.

Back then I’d have built it and flown it to destruction in 8 days.

My Father once said to my brother “Why bother building it. Just go and throw the box around outside…”

Mine tended to come to a watery end in the aquarium.

Build Day 9
Sanded out the mistrakes and got another coat of primer down. 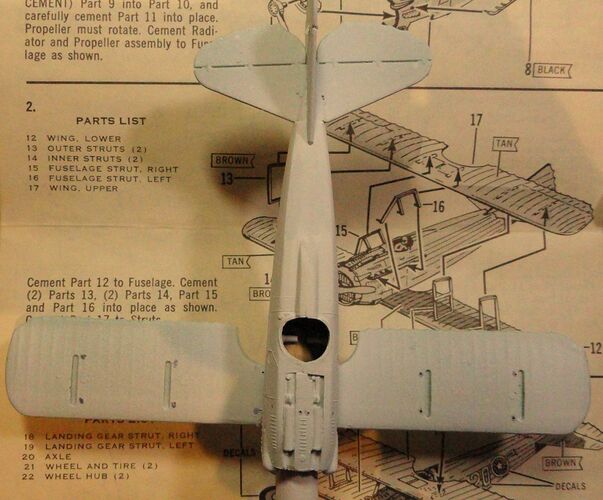 Build Day 10
Lots of scraping and sanding, tons of ejector pins and flash. Hopefully tomorrow I can get some color on these bits. 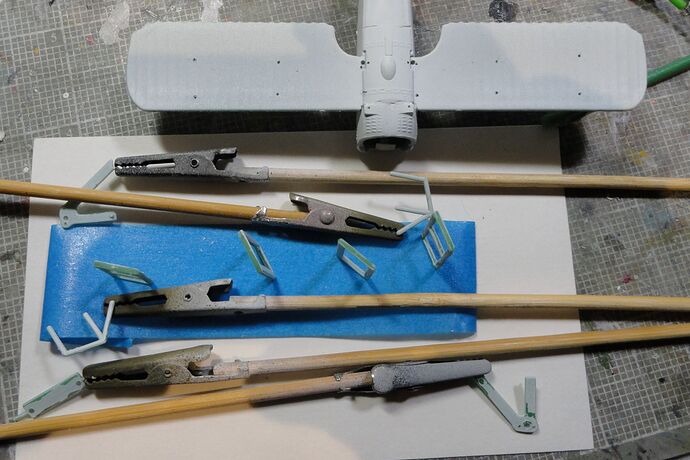 Build Log Day 11
Started too late to be able to run the airbrush, so I started on the pilot.
Hard to photograph the little bugger, If I get too close the colors deteriorate and grow green spots in the brown and brown spots in the green. 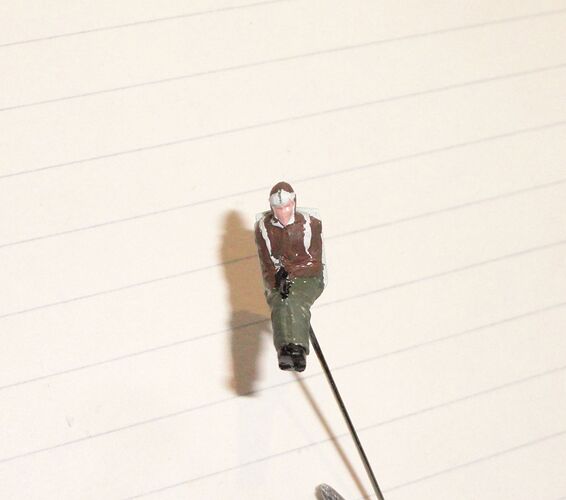 Build log Day 12
Another late start so all I did was finish up the aviator. At least everything is colored in. Now for some touch ups, highlights and lowlights. Maybe tomorrow I can start blowing paint. 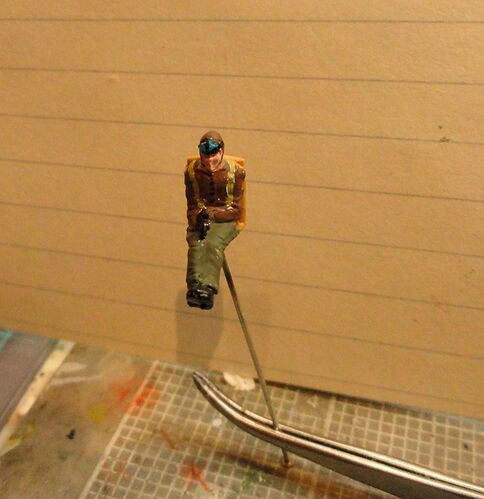 Ah, memories. The way pilot figures were moulded for kits back then. The left arms shorter than the right, and it must have been very uncomfortable for pilots to fly in this ‘wrapped mummy’ position…

I’ve often referred to the Airfix versions as the praying pilot. Head bowed, hands clasped in the lap and heels together, if not ankles crossed. I think that’s why I always look for the resemblance of new tool Airfix pilots to James May.

Build Log Day 13
Color! Finally got some paint down.

Mark, great work on this oldie.
Going to look fantastic when it’s finished and will be worth all the work.

Ha ha. I loved the ‘Toy Stories’ Series. There is a great shot of the figure in here: 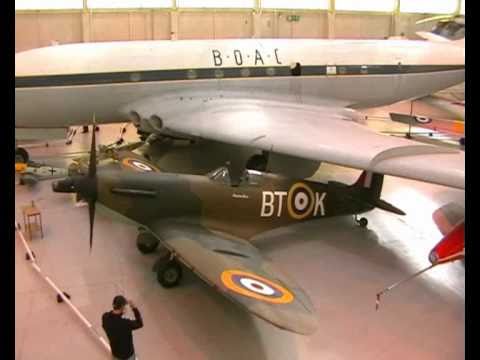 Build Log Day 14
Got a lot of paint laid down today. Some aluminum on the side of the cowling, sand and light green bits of the camo. 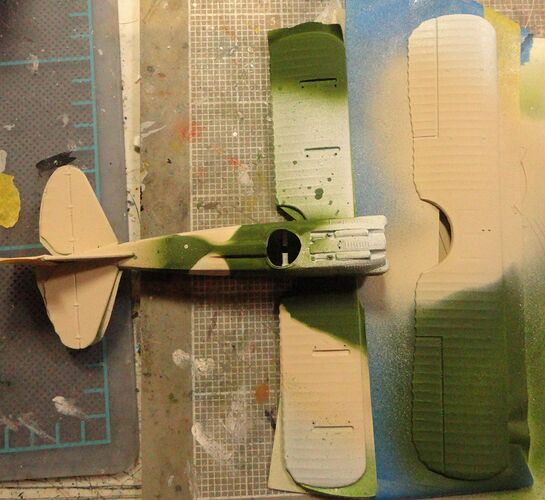