Group Build Description: Has there been a figure campaign before? Maybe keep it simple as any build that is about a figure, any scale, any time period?

Curious if figures part of another build are allowed? I have some German Dieppe figures I’ll be painting for a churchill build

Well as we currently don’t have a campaign leader, sure why not. I would think the intent is to build at least one figure, the more the merrier. 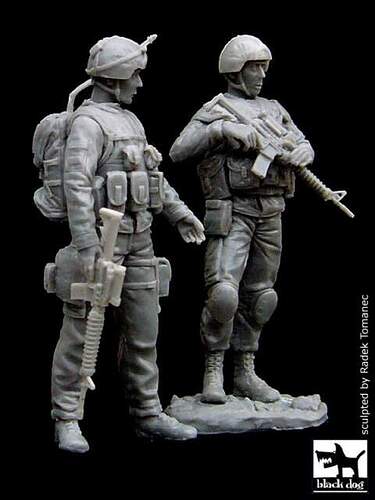 I will prolly replace the heads with ones that have sunglasses cuz Canadian soldiers are cool like that. 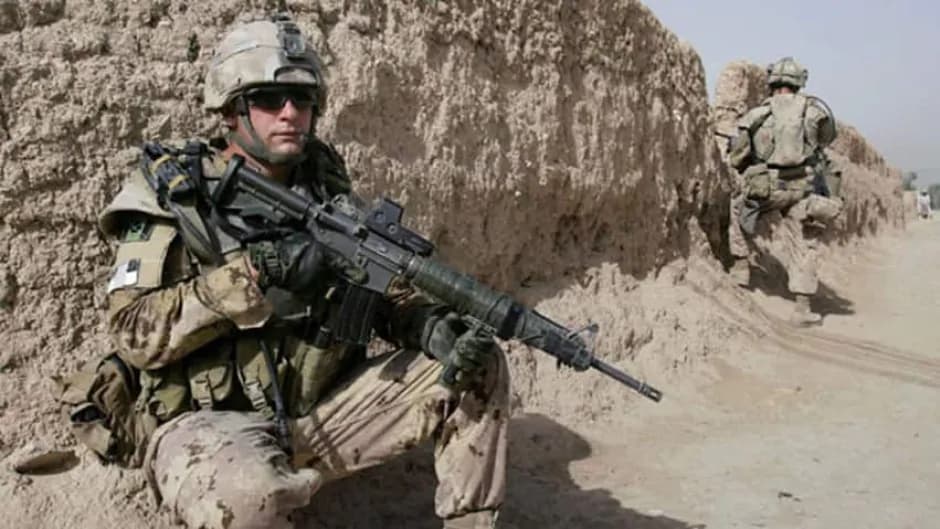 I will be starting late though as I will be in the Caribbean for the first week in January .

Any limitations on nudity/eroticism? I’ve any number of ladies* flaunting the flesh…

That is always the toughest question, if it’s nose art on the plane I would say it’s historical however not so much with figures for the most part but it is a part of the figure genre but because of other considerations and the one who has to deal with the true headaches that one probably needs to head to the head shed for an answer, @staff_Jim what is your take on nudity/eroticism for a figure campaign?

I’m in for this one. Not sure right now what I’ll do but I have plenty of figures to complete.

Based on other campaigns and as Phil posted, I would think any scale, any subject as this is possible the first figure campaign at least on the new site anyway so sky’s the limit for now. If popular then theme and scale can be added for other campaigns.

The bare minimum would be one figure, up to the modeler if they want to added more. Historical speaking most campaigns allow up to 25% started model if allowed.

Not the campaign manager but my thoughts, what do others think?

Not the campaign manager but my thoughts, what do others think?

I tried looking at various IPMS-related sites and it’s leading to Brain Strain. Single figures, vignettes and dioramas are classed separately with the the main problem in definition being between vignettes and dioramas. I would suggest as an initial group build we take a very relaxed attitude as to scale, size and numbers, but if Jake and Dinos Chapman submit “F—ing Hell” they should be subject to an appropriate amount of derision…

I have three thoughts about this:

I’m hoping someone will figure all that out and step in, and perhaps starting a different thread would be the best thing to do once someone steps up. And I was hoping the thread title would get someone’s attention who would want to do that.

Group Build Description: Has there been a figure campaign before?

We used to have them fairly regular on the old site on the Historicus Forma page. It would be nice to see them start up again here on the new site.

So, I would be interested in signing up for one.

@staff_Jim what is your take on nudity/eroticism for a figure campaign?

We normally have always kept things pretty family friendly in our forums. Definitely a no on the eroticism stuff. Nudity is probably okay if it’s just breasts or showing a lot of skin.

Definitely a no on the eroticism stuff.

Roger that! So, that’s the MiniArt sheep out of the picture…

man I haven’t laughed that hard in a while

I might join.
Got a bunch of sets I need an excuse to build.

I will join this GB. Except for painting few 1/35 figures that comes with the kit, It is an uncharted area for me… Will see how this goes…

We normally have always kept things pretty family friendly in our forums. Definitely a no on the eroticism stuff. Nudity is probably okay if it’s just breasts or showing a lot of skin.

Good, now we have a fatwah we can work to. No Phoenix Phollies, Lost Land of Atlantis or similar stuff. A lot of Brother Vinni’s stuff is probably marginal at the least. There are, however, a few minor items which would benefit from a little further clarification. For example historical ancient warrior types such as Early Mycenaeans and Celtic Gaesati who went to war with their wedding tackle swinging in the breeze. Probably acceptable in the absence of tumescence? Renaissance depictions of ancient mythology are a dubious guide as although now hallowed by age they were originally just rich man’s prawn-ograph; I don’t think painting up your miniature reproduction of Vincenzo de’ Rossi’s “Hercules wrestling Diomedes” (where Big D is applying the Vulcan Death Grip to Herc’s beef bayonet) is going to pass inspection. Damsels in distress is another area which can garner negative reactions nowadays despite the former popularity of art such as depictions of the chained Andromeda (sometimes without either the monster Cetus or the hero Perseus, or with their struggle consigned to the background in a minor supporting role).

I thought it might be worth posting pictures of some of my old stuff to gauge reactions, principally from the moderators. They were taken some years ago and the figures are much older than that (they are all in the 25mm-28mm scale range).

Kosher: historical, in context, no unfortunate overtones apparent to me. 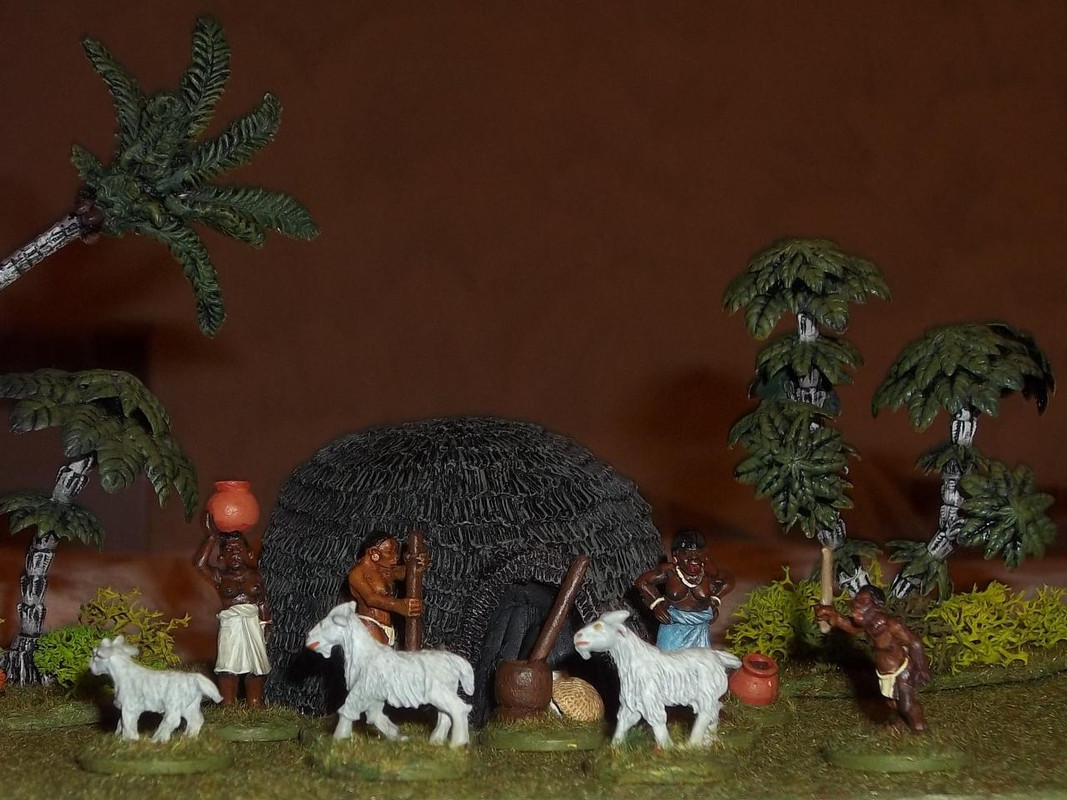 Fantasy women warriors and friends: Should be O.K. 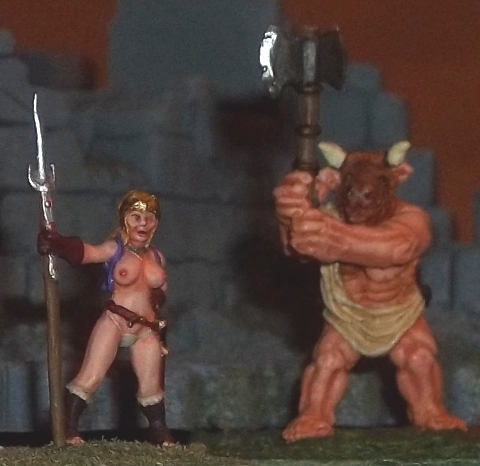 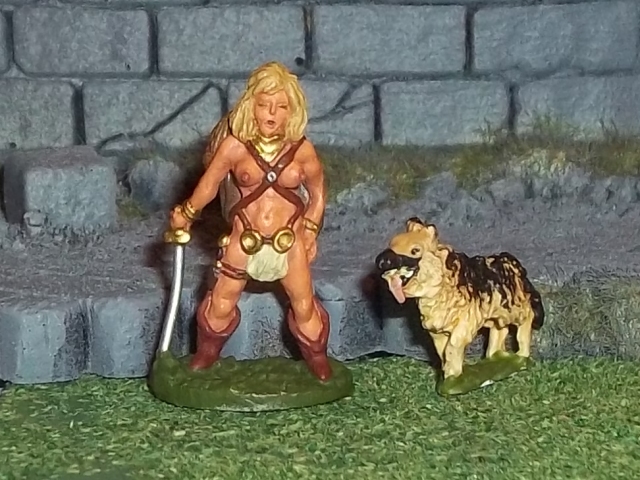 Boobs ’n pubes: Fantasy women warriors, some of these figures ceased production in the early 1980s and sport the then predominant growlers rather than today’s more problematic full Brazilians. 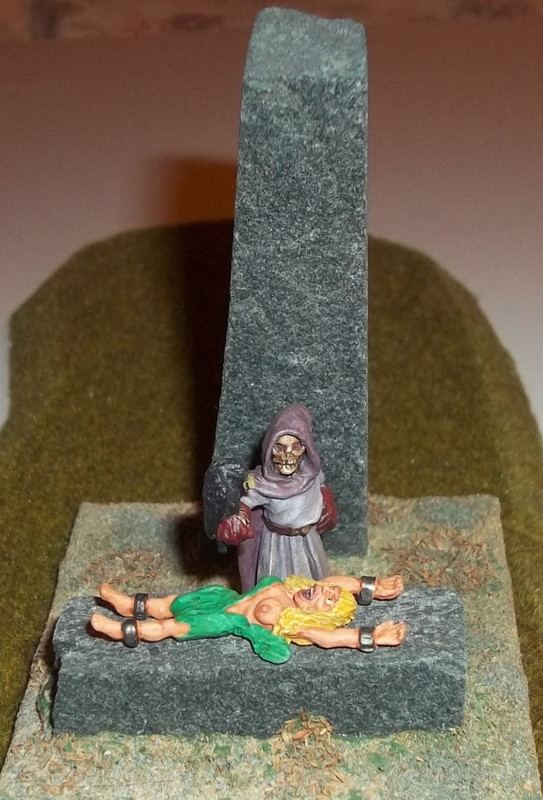 More distressed damsels: marginal as a single figure because of the theme, possibly more acceptable in the context of a vignette. Minor self-censorship applied. 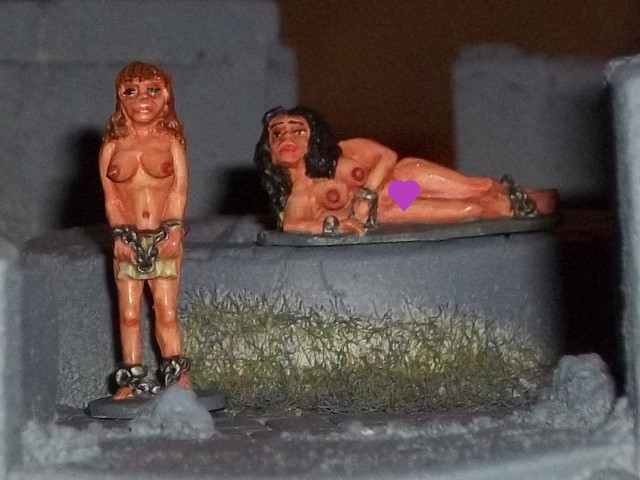 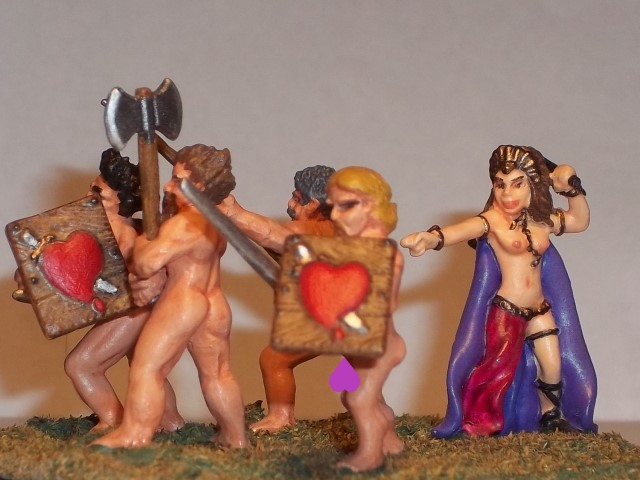 Utterly Unacceptable: It’s impossible to illustrate what’s not acceptable here by showing that which cannot be displayed. I thought of posting a couple of links to some of the more humorous examples but they showed up with thumbnails and had to be deleted.

At least we’re not as bad as those railway modellers who not only have copulating couples but have MOTORIZED them!

Any news yet? Looking forward to this if it gets off the ground.
G.

I think it’s a go, just needs a sucker, I mean campaign leader and then on Jan 1 to get the campaign guru to move this thread from stage to active.